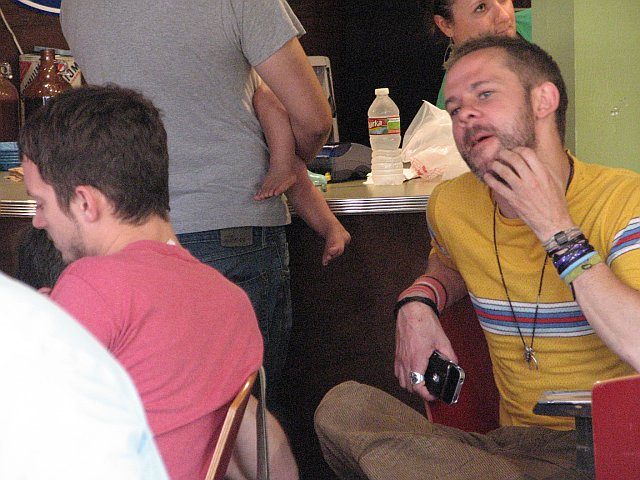 Austin was a cool city. We didn’t get to see much but what I saw looked cool and it reminded me a lot of Portland. It seemed like a big, sprawling city with so much cultural things to see and do you’d never run out. I know the music scene is pretty amazing there. I wish we’d had more time to check it out.

The first stop was the Lyndon B. Johnson Presidential Library near the Austin stadium. It was a sprawling, impressive building and I enjoyed the library.

It was cool to see what LBJ did during his career. I admit that I’m a little rusty in my US History because it’s been ages since I was in school. I loved seeing the old handwritten journals, letters and love notes between LBJ and Lady Bird.

It was a cool collection and worth the visit. The place was packed with history and fun videos. There was a lot of counter culture stuff too. I loved seeing the clothes and the women’s lib posters.

The archives looked impressive but we weren’t allowed to go on those floors (boo!). I REALLY wanted to go onto those floors. But I’m kinda of a nerd.

I guess all of the museums in Texas are free–which is a great thing. I think everyone should be able to enjoy museums and the history. After the LBJ museum we checked out the Austin stadium (huge!) and walked around a bit.

Next stop: Franklin BBQ for lunch. It came highly recommended by a friend of Michael’s who lives in Austin. It was close to the college and clearly the most popular joint in town.

The line to get in snaked through the restaurant, out the door, down the porch, down the stairs and around the building. It was obviously a hot spot.

We stood in line for an hour but it was totally worth it. I chatted with a girl I met in line and she gave tips on Austin sights.

Then we saw some celebrities! Sitting inside the restaurant was Elijah Wood and Dominic Monaghan from Lord of the Rings (and Lost)! There was NO mistake– I saw Elijah’s bright blue eyes and it was totally him! I have to say it was pretty exciting!

They ate lunch with a Hollywood producer, chatted with some locals and headed out. It was pretty exciting! I wish I had gotten a better photo but the others were too blurry and I didn’t want to be obnoxious to get a better picture.

We were FINALLY at the front counter. The fatty brisket and ribs were sold out. Apparently that’s why people were in line so early.

My family got the lean brisket and I got the sausage. I got beans and coleslaw–and of course it came with white Wonder Bread.

Holy crap was the food worth the wait!!!

My sausage was delicious. Smokey and spicy. Every bite was better than the previous bite. I shared the sausage  with my family because they gave me three links (so much food!). I also tried a local beer. Meh. Michael said it was Texas’ version of Miller. I am such a beer snob from living in Portland…

I had some bites of brisket and it was good. I had one bite of a fatty brisket and I could tell why it was popular. It was savory and melted in my mouth.

We finished eating around 2pm and the place was sold out of food. Crazy. We drove around downtown Austin for a little bit. We didn’t have time to really stop and see much, which I was bummed about. Since lunch had taken so long we were short on time–which is okay, it was worth it.

My brother Andy and his wife (Lisa) rode in our car and we headed toward Waco to the ranch.

My sister-in-law (also named Lisa) was wearing almost the same shirt as I was. Ooops. We drove out to the ranch where we’d be spending the rest of the weekend. It wasn’t what I’d call a scenic drive…there was a whole lot of nothin’ out there once we left Austin.

I can’t wait to show you guys the ranch!

QUESTION: Have you been to Austin? What are the must-see sights?

What Does Fitness Mean To You?