I started off my weekend right! On Friday afternoon I got another chance to hang out with Suzanne and got a mini personal training session right on the streets of Portland. She wanted to check my form on some movements. She said I was pretty good but there were some tweaks I needed to make on a few. The big one was squats. I thought I had been doing them correctly because my physical therapist had corrected my form. But I was still putting too much pressure on my knees. Suzanne fixed that and I had a lightbulb moment. 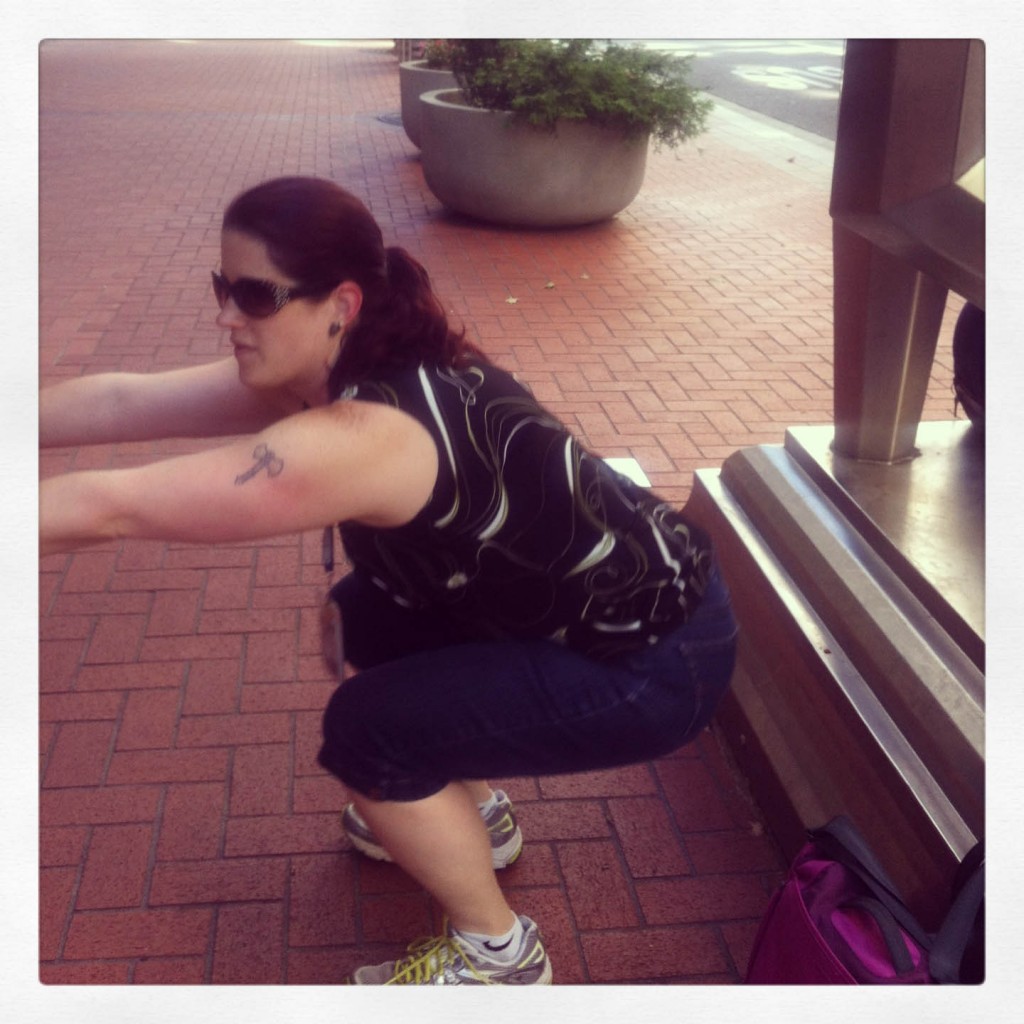 Basically I need to put ALL my weight on the back of my heel and not be putting it on my my whole foot. After work on Friday I went to yoga class and then home to some beer and pizza! Woohoo! Way to go Michael. It’s been ages since we got Papa Murphy’s (since Michael went gluten-free) and it was a nice treat to have it again. He got the deLite pizza (low calorie) and I enjoyed my beer on a hot summer night.

On Saturday morning I went out to test my bike and the changes the fitter made last weekend. It was already in the 80’s at 10 a.m. but once I was on the bike it was pleasant. Michael joined me and we drove to Sellwood, parked the car and picked up the Springwater Trail from there. There were just too many hills near our house in order to test my bike on a flat trail. 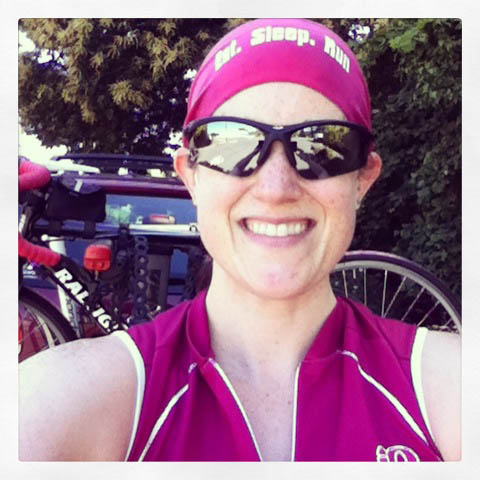 My goal was to do between 8-10 miles of easy riding to test my knees. I had to remind myself a few times to slow down. Once I got on the trail I definitely pushed it a few times because I think I forgot what I was doing. I got on the trail I was so used to taking into work and it was like my body took over and my mind checked out–biking fast and hard like I used to. So I slowed it down. We almost crashed right out the gate because some walkers with a dog weren’t paying attention and let the dog have a super long leash. Michael stopped short and I was able to stop before crashing into him. Sigh. People.

The other annoyance: apparently there was a charity 3K walk on the trail that morning. Probably 100 people were walking, which would have been fine had they cared about anyone around them. The trail is narrow and very very crowded and these walkers decided to walk 7 people wide so no one could get around them going either direction. So frustrating. That is definitely something I don’t miss about the trail–inconsiderate people! 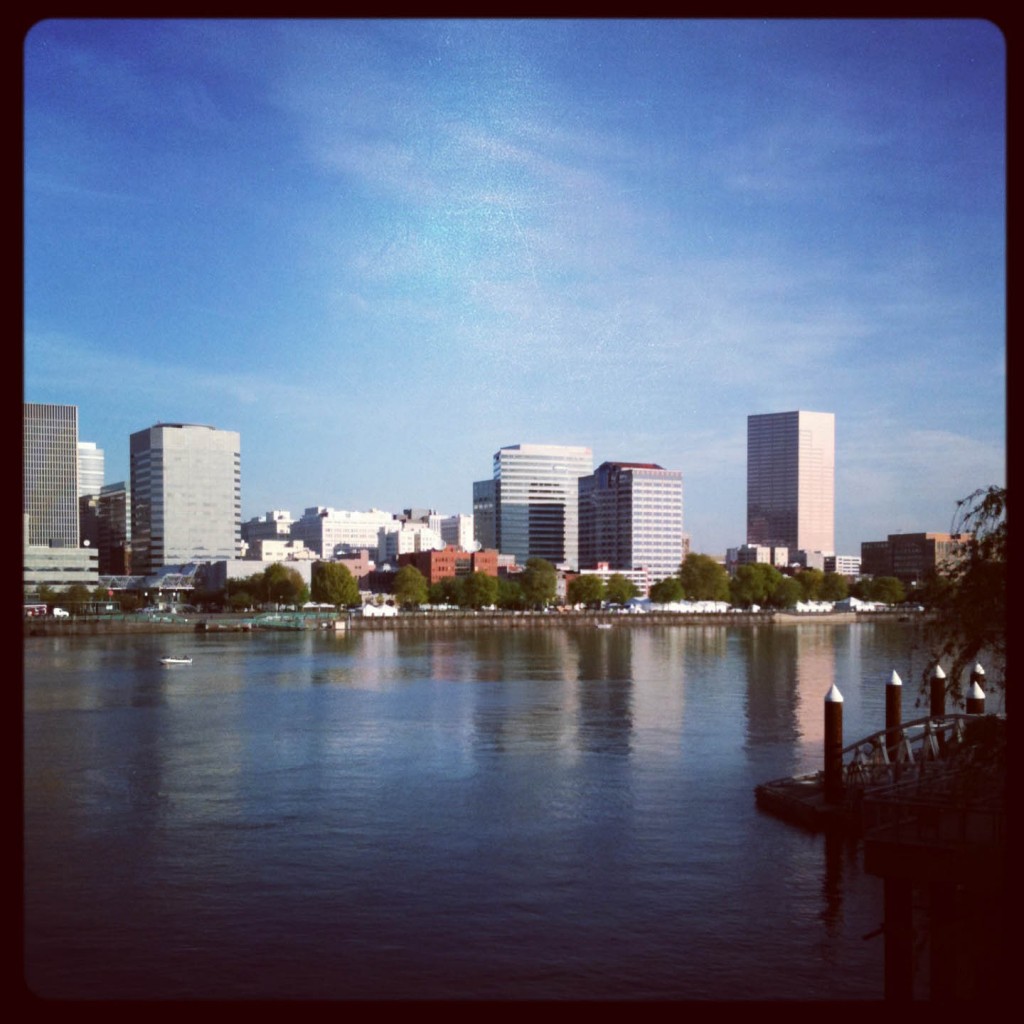 We got to downtown on the east side of the esplanade and called it good. I was feeling really great. I had no knee pain during the ride–but honestly, this past year of bullshit knee stuff has taught me that I RARELY have pain during an activity–it’s always later. So I was still unsure if I was okay. We stopped in the shade to rest for a moment before turning around. 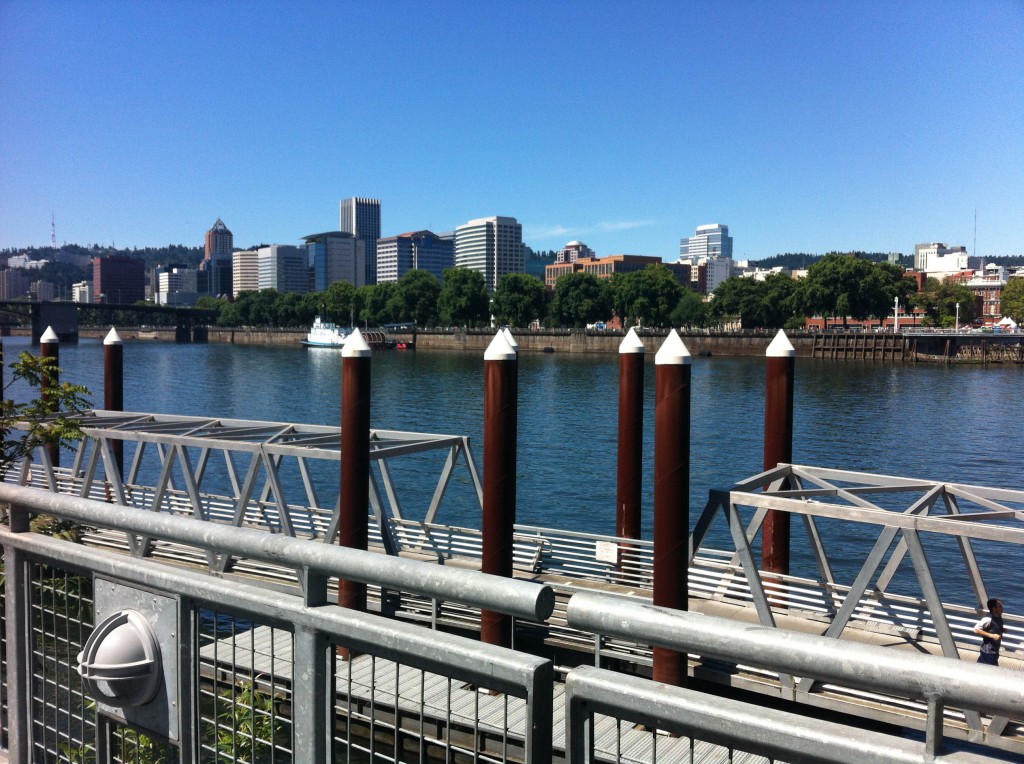 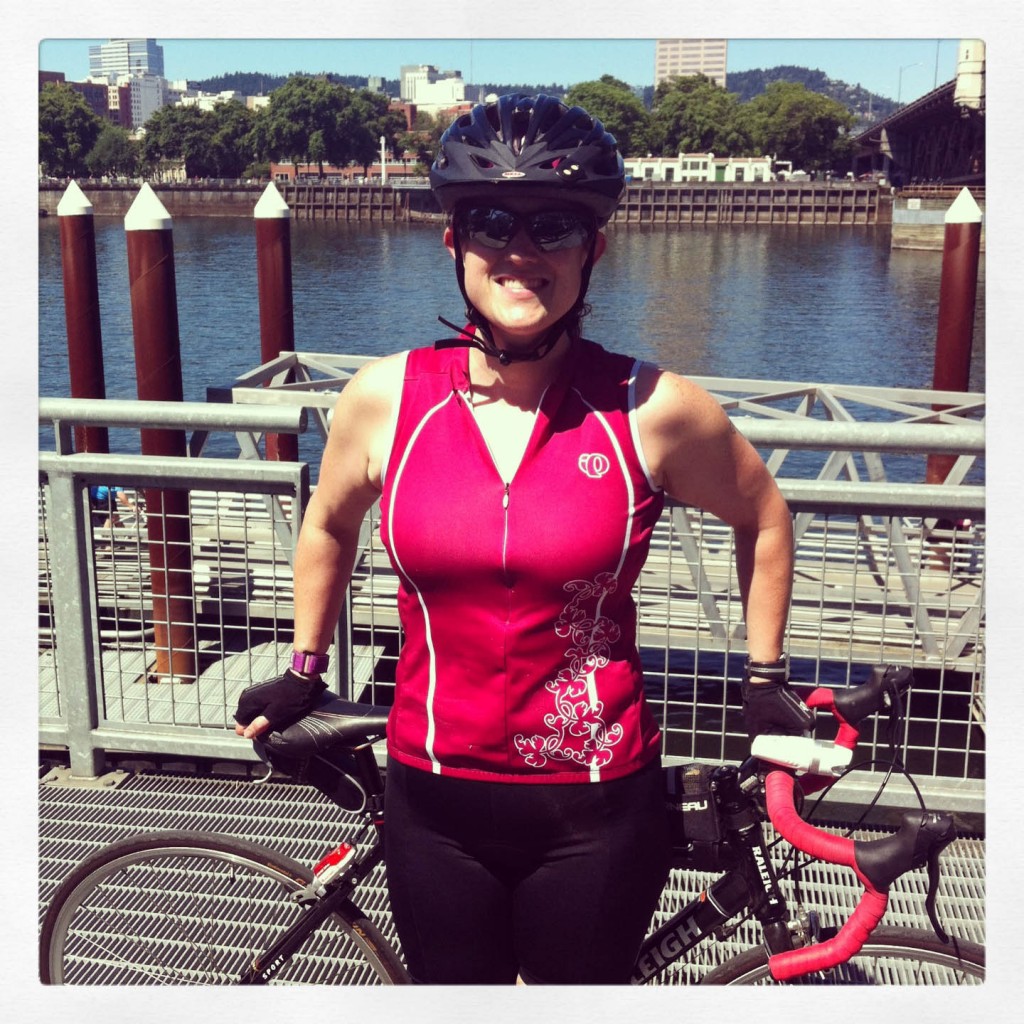 During the ride my heart rate was pretty high–between 140 and 150 most of the time. That was pretty high for me. When I was riding consistently I definitely had a high heart rate at certain points of the trail, but not the entire time. I don’t think I was working extra hard on Saturday but I do think it was a combination of not having the cycling fitness and also nerves. Either way, I had a decent calorie burn for the one hour ride! 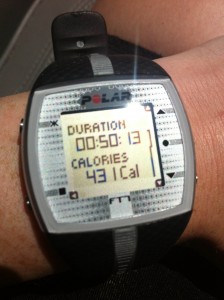 We got back to the car and I was dripping in sweat. Thankfully the ride back didn’t have any charity walkers and the trail was pretty clear. I was so glad I went out and tested my knees. I don’t really know where to go from here–only time will tell. 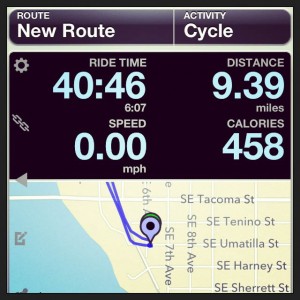 We got home and did a quickie strength routine together–Michael showed me a few kettle bell moves and then it was time for lunch. It was such a nice day I wanted to sit outside so we went to Cartlandia to get lunch at the food carts. We both ended up getting salads from the Good and Evil Wrap cart. And of course I got the same thing I always get– the Buffalo chicken salad. I am obsessed with that salad. It’s so good though! 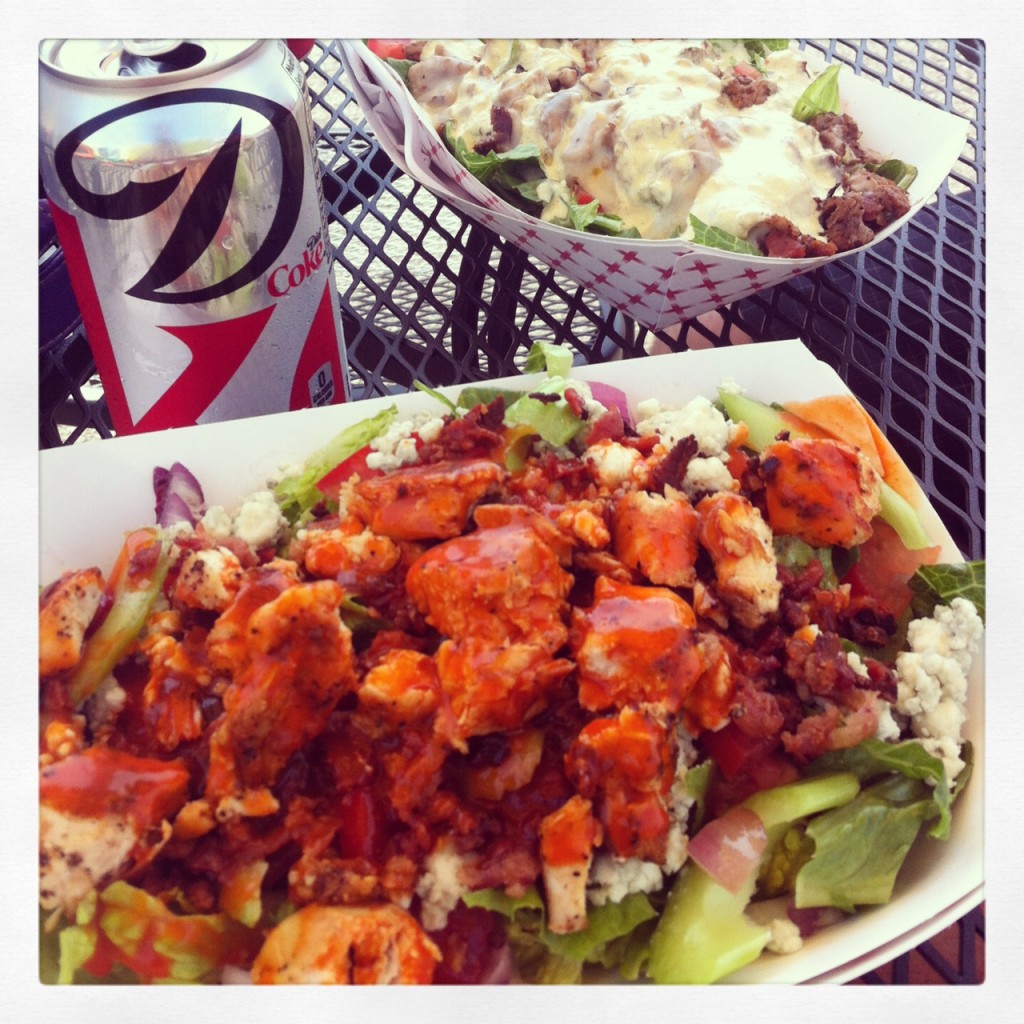 We lounged in the shade and ate our delicious lunches and discussed our next move. After lunch we ended up going to see Man Of Steel. I was disappointed. I felt like the movie lacked soul and passion. There was no chemistry between Superman and Lois Lane. The store was absurd at times. I won’t say too much else because I don’t want to give it away but it could have been so much better. Oh well…

How were my knees? They were okay. I wasn’t in pain but I was definitely tight and uncomfortable. I don’t know yet how to distinguish between normal feelings and abnormal in my knees because things have been so IFFY for so long. I *think* it was just normal soreness because Monday I woke up totally fine.

Speaking of the next day…I had a FANTASTIC Sunday night! I’m still glowing. I met my cousin Anna at Slow Bar for dinner before we went and saw FLEETWOOD MAC!!!! One of my all-time favorite bands since I was a little kid (the other being Michael Jackson, of course–when I was 4 years old and got my very first record of Thriller).

We shared a few laughs, some Bloody Mary’s (fantastic Bloody’s at Slow Bar!) and split a veggie burger, salad and some fries. It was the perfect amount for dinner on a 95+ degree day. 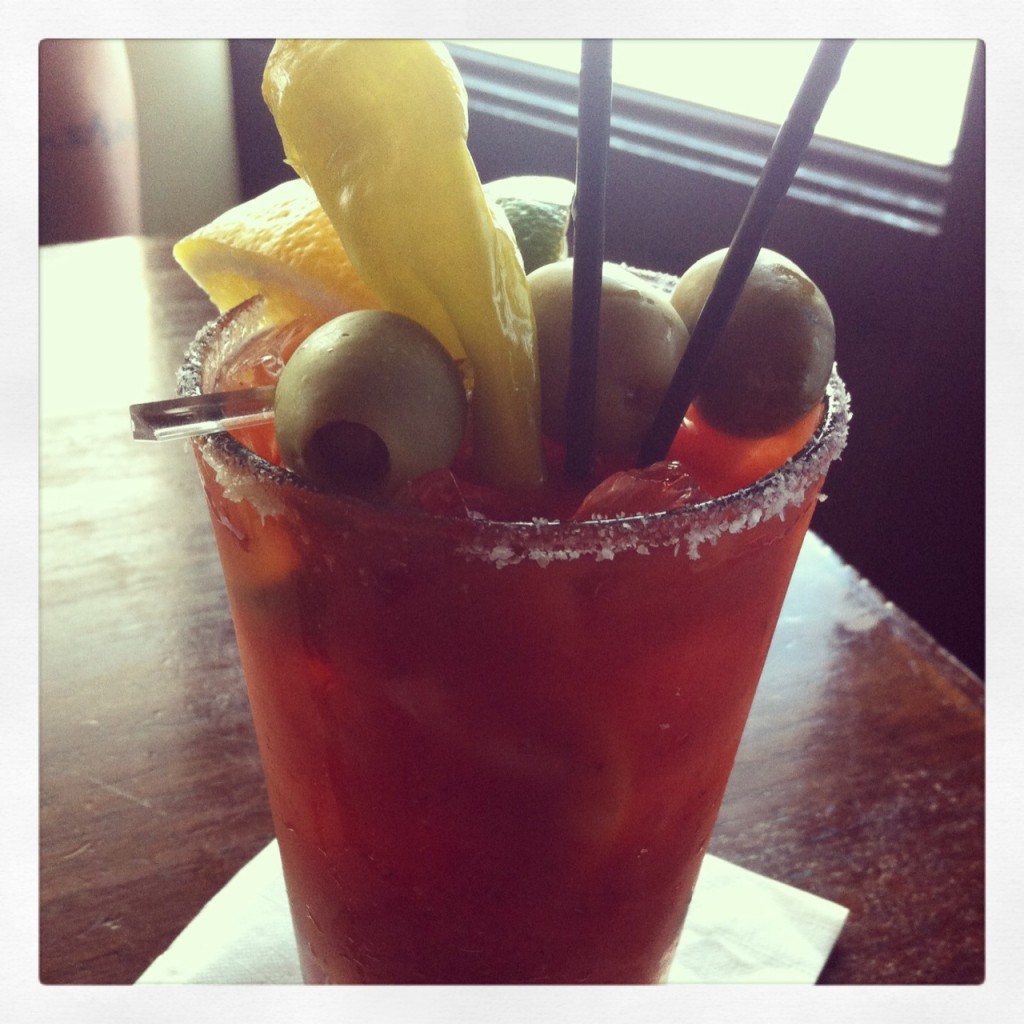 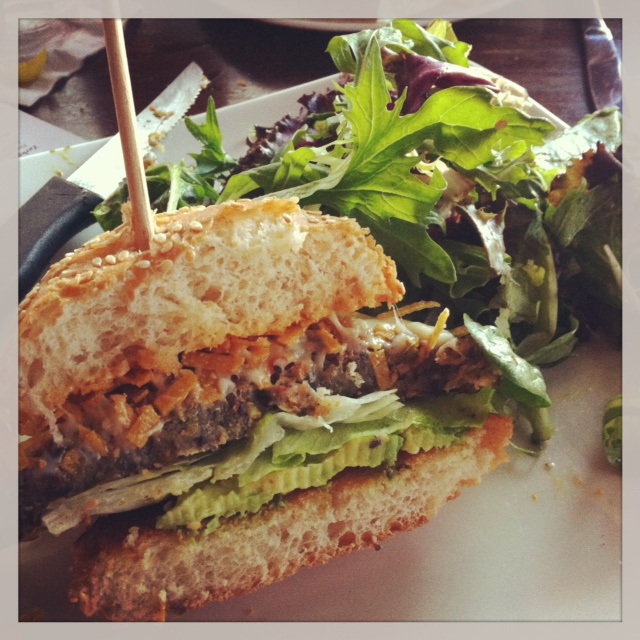 The concert was at the Rose Garden and it was a sold out show. We got the middle of the road tickets and had great seats! There was no opening band and Fleetwood Mac (minus Christine) was all there and they played nearly 3 hours straight with no breaks. They also told lots of stories and stuff in between some of the jokes. It was very cool to hear about how certain songs came to be. 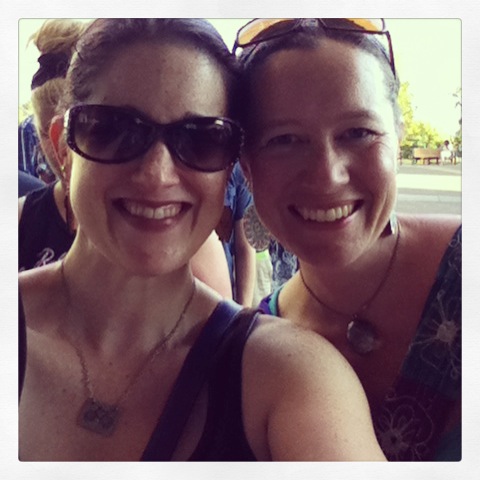 The video isn’t great, I took it from my seat at last night’s show, but the audio is fantastic. Enjoy Landslide!

They played all the hits, some older stuff that wasn’t as well known and two new songs. Everyone sounded absolutely fantastic. I was just blown away by how real and amazing they sounded. Hands down, one of the best concerts I’ve ever been to. I am still glowing with happiness! 🙂

QUESTION: What was your highlight of the weekend? Favorite live show?

As always, the weekend went way too fast. I followed my doctor’s orders and when I made it to the gym on Saturday (I was moving very slowly that morning) I took it easy and didn’t do any activities that were below the waist. I’m super stoked that I’m able to do triceps kickbacks at such a heavy weight now. I’m thinking in the next week or so I’ll be up to 20 pounds! 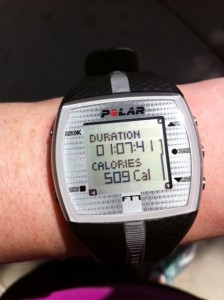 After my gym session, Michael and I had a little date day together. We went back to Cartlandia for lunch. I was tempted to go back to the wrap cart I told you guys about but I thought I should branch out a little and try something new. After perusing all the options we ended up splitting an entree from the Thai Mango cart. It’s been AGES since I’ve had Mongolian Beef and the last time I had it (PF Changs), I remember it being super greasy and covered in sauce. 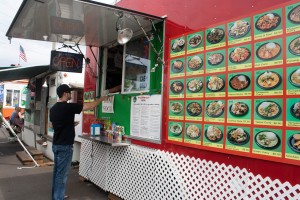 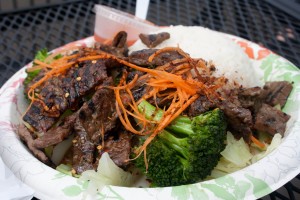 Thankfully it wasn’t like that this time. It wasn’t greasy at all. It was the perfect amount for two people to share for lunch. I’m glad we decided to split it. My only complaint about the delicious dish was that the broccoli should have been cut a little smaller. It was kinda hard to eat with a plastic fork! And we might have gotten another order of those cream cheese and jalapeno wontons. Might have… 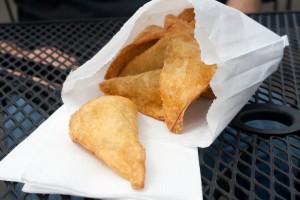 After our lunch in the sun we caught a movie. It was such a nice day out–upper 70’s–and I was in shorts and a tank top! I wanted to spend the afternoon soaking up the sunshine. But sadly there wasn’t much we could do with my knees all borked and the doctor’s orders to rest. Soooooooooo lazy day it was. We ended up seeing the Evil Dead remake. DO NOT GO if you are squeamish in any way. It was pretty gruesome, but decent for a horror flick. (I did keep thinking about THIS movie the entire time, though…)

The rest of the afternoon was spent reading (two mindless chick lit books) and Michael watched sports. Fun times, huh? I wasn’t feeling up to doing much honestly. 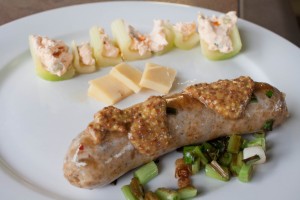 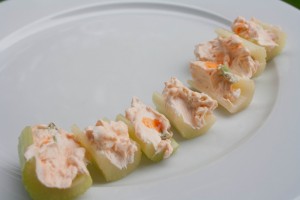 Dinner Saturday night was simple and lazy as well. Michael grilled up some spicy bratwursts and I had some slices of that fancy English Cheddar cheese on the side. I also created a fun little snack!

It was super easy and tasted great. We had it as a side dish with dinner. I know, not as healthy as say broccoli or Brussels sprouts would be but I loved it! I’d make it a little bit spicier the next time I make it. It was a fun little snack and a much better way to eat celery. 😉

The weekend wrapped up and April ended with a lackluster fizzle for me. I’m hoping May is a little bit better…

I think it’s so crucial to make attainable, achievable, realistic goals. If your goal is to lose weight, saying you want to lose 100 pounds in 4 months is NOT realistic (or healthy for that matter), so why not set the goal to lose 30 pounds in 4 months? I understand the desire to be an overachiever but in the long run, a methodical, planned out journey to reach your goal will be much more successful.

1. Complete the 6 Week personal training program with Suzanne and possibly sign up for another 6 weeks, if needed. YES! I totally rocked this. Check back soon for the recap and final results.

2. Go for a bike ride if weather and knees permit. I did! I went for two bike rides in April.  Both rides went really well. Unfortunately, I had another flare-up of my knee issues after the second bike ride. This sparked a tearful call to my sports doc who scheduled an MRI. I also did about 8 weeks of acupuncture in hopes that it would help me.

3. Try once again to get back at running! Okay, I think it’s time to stop putting this on my month goals for awhile. I’ve been tried to get back to running since January and it hasn’t happened. So, I’ll stop for awhile.

I’m pretty happy with my April goals, despite the knee flare-ups and the frustrations of not being able to run. My goals for May aren’t really shooting for the stars. My doctor ordered rest period is kind of putting things on hold for awhile. I guess this is time for me to learn HOW to rest…

1. Work on my core strength and glutes/start Phase 2 of Suzanne’s program.

Of course I’m disappointed that my goals this month don’t involve commuting to work on bike or getting back to running. I think I’ll live in denial for a little while and NOT think about it. I’m debating on taking a full week off from ALL activities to just give myself a break and to process things but I’m still on the fence with that…

QUESTION: Do you have any goals you want to achieve before summer arrives?