I’ve sort of fallen out of the habit of writing about my food here. My blog started out as a food journal because that was all I really knew about the “healthy living blog” world at the time. Lately I’ve been doing so much more writing about other things I haven’t done one of these in awhile. Once in awhile it’s good to check in. This post is one day’s worth of eating. The foods here are pretty typical of a day for me.

I made an omelet for myself for the very first time. I’ve tried to do it before but those attempts usually ended up being scrambled eggs. This time I used a smaller pan and it worked great. I sprinkled just a tiny bit of shredded Colby Jack cheese on one side and added some black beans on it, let it cook a little and then folded it over. 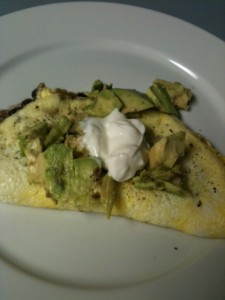 I topped the omelet with half an avocado and a serving of sour cream. It was delicious and I was really proud of myself for being successful. I don’t eat a lot of omelets because there are usually too big and have too much cheese in it. Mine was just right.

When I got to work, I had one cup of black coffee with two servings of coffee creamer.

My morning snack was an apple. I ate it around 11 am. I slice the apple into a bunch of pieces because it takes me a long time to eat it that way. 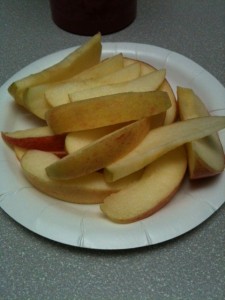 For lunch I brought soup that my friend Star made. It was a vegetable and potato soup that was creamy but she did not use any dairy in it. She told me how she made the soup but now I don’t remember. 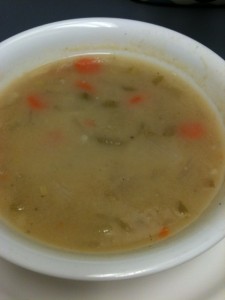 I measured out a serving of Wheat Thins to go with my soup. I also had a piece of chocolate after lunch from the Candy Room at work.

For my pre-workout snack I had a Chobani Greek yogurt. I had the vanilla because it’s my favorite flavor. It’s not as sweet as the ones with fruit in it and with Greek yogurt I just need a little taste of sweet. 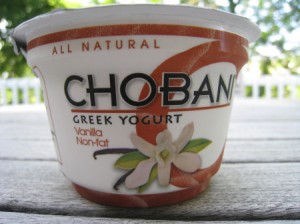 For dinner Michael and I made a “throw it all together” dinner. First I sauteed kale and onions in the skillet with a little Grape Seed oil and chicken broth. When it was cooked down Michael added two bratwursts sliced into small pieces into the skillet. 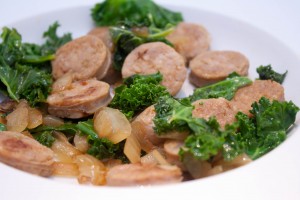 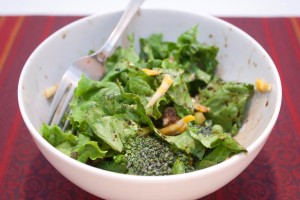 While that was cooking, I made dinner salads–green leaf lettuce for me and spinach for Michael, topped with raw broccoli, a little bit of shredded cheese and a serving of croutons. I also added some cottage cheese to my salad after I took the photo.

For dessert that night we had ice cream! It was the last of the ice cream we had in the freezer, a lower calorie Chocolate Chip Cookie Dough. 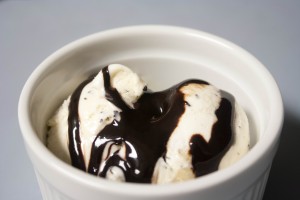 I topped mine with a little bit of the hot fudge sauce that I love! It’s from Wax Orchards and it’s 45 calories a serving. It’s rich and delicious and made from fruit instead of chemicals. It’s also diabetic friendly, but it doesn’t taste fake. It’s my favorite “light” treat.

I warmed up on the treadmill before Spin class. It was a really good class, even though it was a substitute teacher that I didn’t really like much (she sang along with the music…um….). The routine was difficult and I loved the challenge. Here was the  workout: 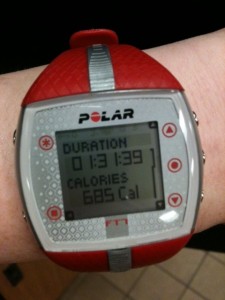 The class was difficult and I loved that I was able to do it! My legs felt like jello after the class.

So that was my day.  That was a typical day for me when I work out. If it was a rest day, I’d skip the afternoon snack. What are my numbers? 1790 worth of food with 685 calories burned in the gym. Dinners are usually more in the 700-800 calorie range but it was just one of those nights where we didn’t have anything defrosted and needed to go to the store for more produce. What I strive for is to eat between 1600-1900 calories a day, the higher days are when I work out.

QUESTION: Do you like food blogs that are in diary form (I ate XYZ)? What do yo like to read the most on blogs?