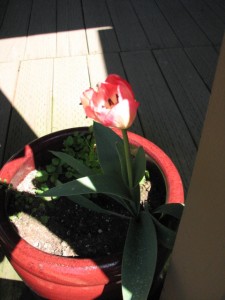 I don’t remember planting bulbs in the pots on our back deck, but something is blooming either way! 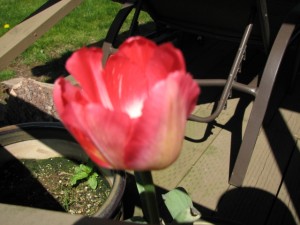 Saturday was SO nice in Portland! It was about 76 degrees out. I was in my shorts, sandals and tank top doing yard work all day. Michael and his friend Jeremy made a trip to Home Depot for supplies to build our raised beds AND to buy our new composter! Michael and I have been discussing for over a year about how much we want to compost. We have lots of plans for our garden. Michael’s yard is humongous; it was one of the selling points when he bought the house. We’ve spent so much time clearing the weeds/blackberry bushes and other odd plants from a corner of the lot for a composter. 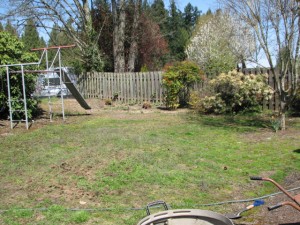 The above photo is just half of the yard. We also have plans to build a chicken coop and have our own chickens! We eat a lot of eggs and I think it will be financially sound to have chickens. Plus, we both want to eat more home-grown foods. Jeremy worked on clearing the spots for the two raised beds where we will plant veggies: 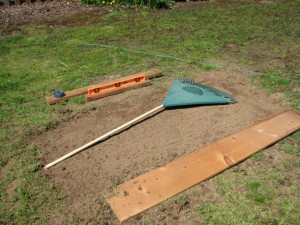 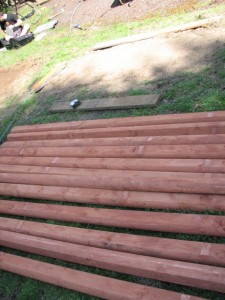 I pulled weeds all afternoon. It was quite therapeutic and I enjoyed it. This time I did it smart: I brought out a pillow and towel and kneeled and sat while I pulled weeds. I hope this saves my hamstrings! Michael spent the afternoon building the composter. 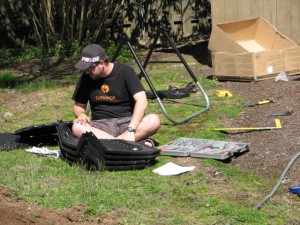 He bought the kind that we can turn with a handle–which will be much easier for mixing the compost. Everyone we’ve talked to hates the manual kind where they have to use a shovel to turn the compost. We didn’t want to have yet another house chore that we hated so this model was the best for us. 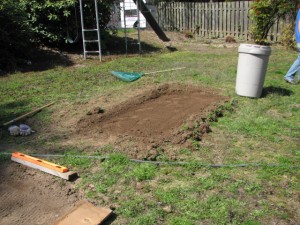 Two years ago Michael built a raised bed on his own and grew hundreds of tomatoes and jalapenos and peppers. 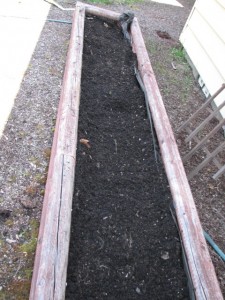 The raised bed was in a great place for direct sunlight and there were so many tomatoes we had to throw a lot of them away. Our goals for this summer: tomatoes, spinach, lettuce, zucchini and cucumbers. Maybe we can do sweet potatoes too. I’d like to grow strawberries but I’m not sure if I could do those. 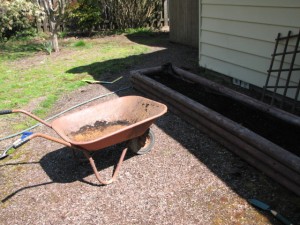 I am really looking forward to doing this with Michael. I have a Black Thumb when it comes to gardening. I wish I had a Green Thumb because I REALLY want to have a garden! But I just don’t have that gift to grow things, or um…keep them alive….except for cats. 🙂 After spending the day in the dirt, we cleaned up and went to Michael’s Mom’s surprise birthday party! 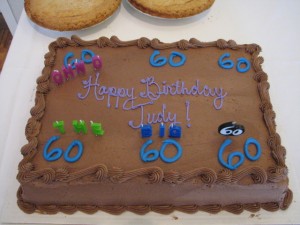 The party was a lot of fun. Michael and I were running around trying to pick up last minute things (cake, ice, etc) and we were both starving and tired by the time the party started. It was great that Michael’s sister Julie did so much to plan the party! It was so nice out yesterday I got to wear my new sun dress and sandals! 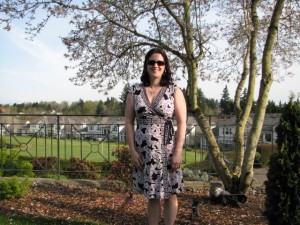 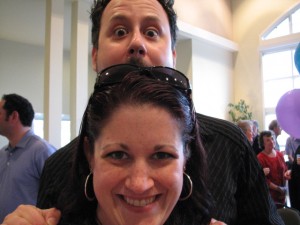 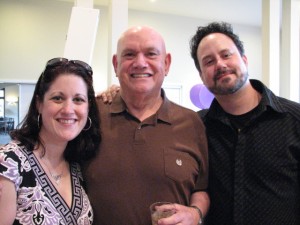 There was tons of food there too. I tried to eat smart: I had a little bit of everything I wanted and then went back for a bit more of certain things. 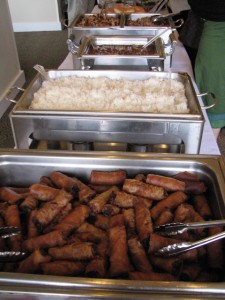 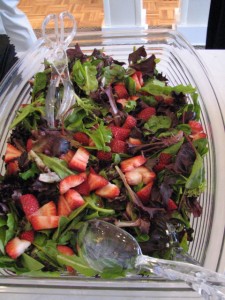 The food was yummy and I hadn’t realized just how famished I was until we got there. I made a pulled pork sandwich with the small dinner roll. 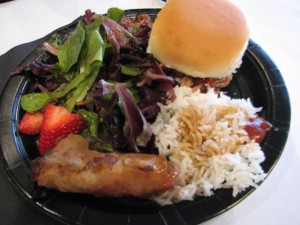 Michael and I shared a small piece of chocolate cake (it was so good) and then later we shared an even smaller piece of the vanilla cake (a sliver really). 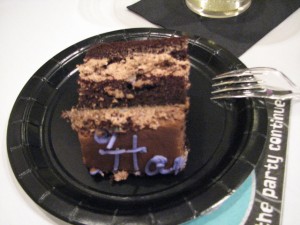 I went over my calories a little bit for the day but I didn’t go crazy with the buffet so I feel pretty good about the evening. I’m glad we were able to help with the party and his mom was surprised–so I call it a success! After everyone left I helped Julie clean everything up (dishes, packing up food) and we finally left around 10:30pm. I don’t even remember falling asleep last night I was that exhausted! 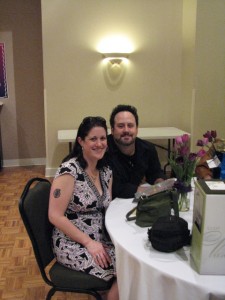 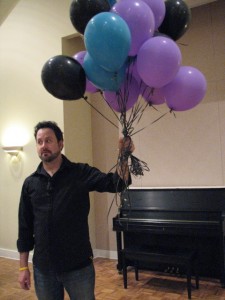 QUESTION: How did you spend your Saturday?

This time two years ago Michael and I escaped to wine country. 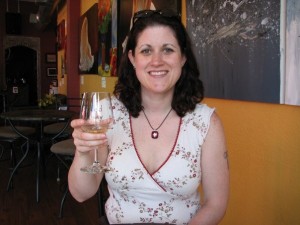 But a month prior to our weekend getaway I surprised Michael for his birthday by kidnapping him, driving him to the Columbia Gorge for a surprise hike and picnic (all food and snacks from Trader Joe’s), then to Hood River for wine tasting. Neither of us had ever been wine tasting before and I thought it would be a nice birthday surprise. His birthday gift from me was hiking boots from REI. 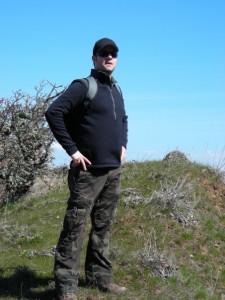 It turned out to be a total hit. And it started our love affair with wine tasting. So a month later we went away for the weekend in the Willamette Valley. It’s packed with wineries (more expensive wineries than the Gorge though). We stayed at the McMenamin’s Hotel Oregon for the weekend.

We arrived (it’s about an hour drive south of Portland) and immediately had happy hour food and drinks on their rooftop bar. It was a nice day but with clouds looming in the distance. 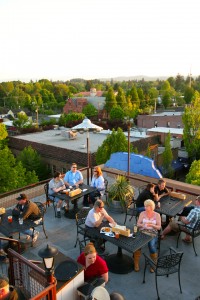 It was so cool up on the roof. Very romantic. After that the rain started and it rained off and on most of the weekend. Which was fine because we weren’t doing a lot of hiking. 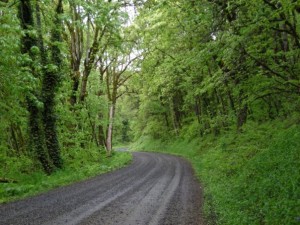 Oregon is rich with vineyards. Wine tasting is a popular past time here.  It can be as cheap or as expensive as you make it. We learned pretty quickly that while we love wine tasting, we both have a low tolerance so often by the end of the tasting excursions we pay for one tasting ($5-10) and split it. It works well. 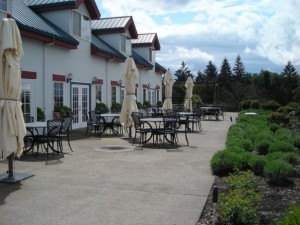 The great thing about wine tasting is the lack of commitment. If you don’t like one of the wines–don’t drink it. In fact, you can spit it out in a bucket. 🙂 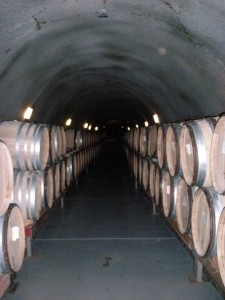 The good thing about tasting is that for (usually) $5 you can try a handful of different kinds and discover new wines you’d never think of trying. For example, I always thought I disliked white wine. Then I had some really amazing Pinto Grigios and was converted.

McMinnville is the middle of farm country here in Oregon. There were lots of farms amidst the vineyards. 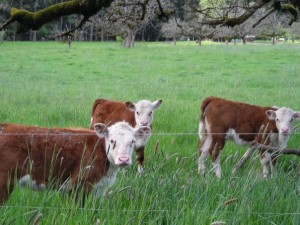 After sampling wine during the day and doing shopping, we retreated back to the hotel room where Michael tried to teach me how to play poker (first attempt of many) and we opened a bottle of one of our newly procured wines. 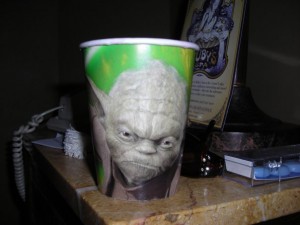 Only the finest stemware used for the best wine. 😉 Later dinner was at a nearby tapas restaurant.

We also stumbled upon an olive oil store out in the middle of nowhere offering samples! Yum. 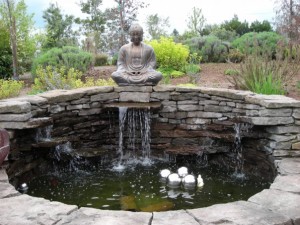 There were gardens and this beautiful fountain too. We had a great time and it just confirmed our love of wine. 🙂 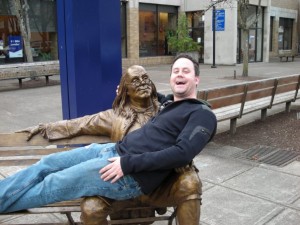 Want to try wine tasting? Watch the movie Sideways and then read a few websites on how to adopt a snooty upperclass accent and memorize some pretentious phrases…then enjoy! 🙂

QUESTION: What were you doing this time last year?