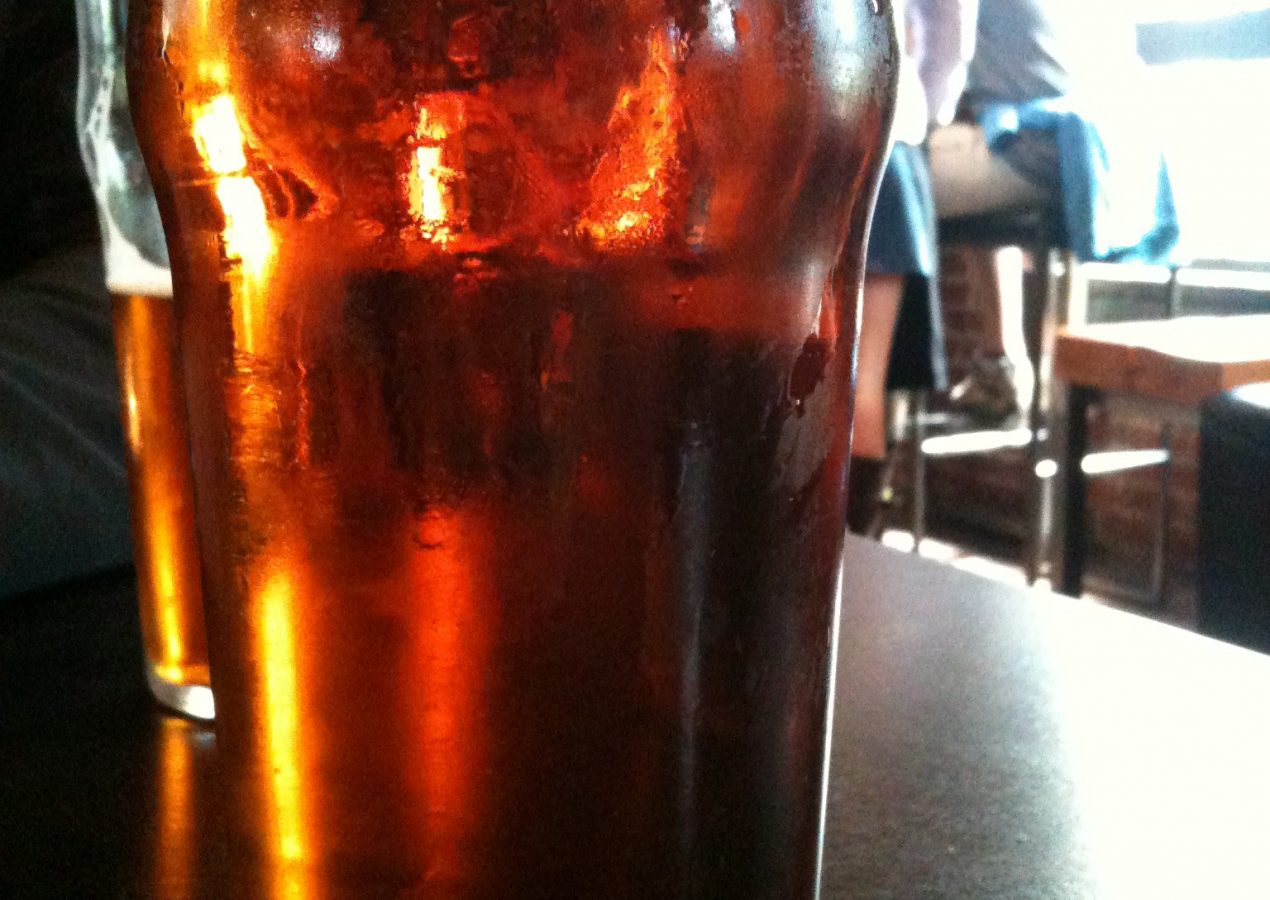 On Saturday I went shopping for cycling shoes! I’ll be writing a post about that experience soon. After the shopping, we drove a few blocks to the Bridgeport Brew Pub for a late lunch.

It’s a really cool building but the food was kind of disappointing. We split the warm spinach artichoke dip appetizer.

It was just okay. There wasn’t anything special about the dip, in fact I’ve had better elsewhere, but I was famished from Saturday morning’s intense workout and would have eaten anything honestly. The chips weren’t that great either–kind of stale. For lunch I ordered the Grilled steak and Roasted pear salad. It was grilled black angus beef, spinach, frisee, rogue blue cheese  and a local raw honey vinaigrette.

The salad was just okay too. I wasn’t a fan of the dressing but the steak and pears were good and the blue cheese was excellent. I thought Michael’s chicken caesar salad was much better though. We both ordered one pint of the Blue Heron Pale Ale. It was a good, crisp beer!

And guess who walked in and sat at the bar near our table! Fred Armisen from Saturday Night Live and Portlandia!!

That was so cool! It’s kind of blurry but it’s definitely him. I covertly took a photo when I went to the bathroom. I rarely see anyone famous (and often times I don’t know it’s someone famous lol). I have met Stephan Fry (it was at the premiere of the movie “Wilde” in Seattle) and I got his autograph. I also got the autograph of the Violent Femmes. But that’s the extent of my celebrity hob-nobbing I think.

We went home and spent the rest of the afternoon working in the garden. I worked hard on clearing out the dead grass, weeds, moss and garbage growing in half the yard while Michael put my new clip-in pedals on my bike and then worked on setting up an automatic soaker hose in our raised beds.

I got so much work done in the garden, but by 6pm I’d hit the wall. I was utterly exhausted. I felt like an absolute zombie. And I could tell that my workout from Saturday morning was starting to take effect: DOMS!

Look at how many freakin’ calories I burned doing yard work! Really?!?! I burned more calories doing manual labor with a rake and hoe than I did in the gym?! That’s just nuts!

Michael made homemade pizza for dinner as I practiced the art of sleeping while standing up.

I had one drink of limeade, a shot of vodka and a splash of sparkling water. I hoped the sugar would pep me up a bit. Not so much.

Food definitely helped. Once I ate a piece of pizza I seemed to get a second wind and come out of my zombie haze.

It was short lived though. I had some ice cream for dessert and then crashed in bed at a very early hour.

QUESTION: Have you met any celebrities?

The "I Forgot To Pack a Lunch" Lunch

D is for Vitamin D