I don’t know about your city but summer came briefly in Portland this weekend! On Saturday it was 78 degrees and not a cloud in the sky. It was absolutely gorgeous! It didn’t feel like March, it felt like July and I loved every minute of it.

My “summer” day started with something I haven’t done since October: a bike ride. I decided to ride my bike to the gym to lift weights. I didn’t want to skip a session because I’ve been doing so well and getting stronger but I also wanted to soak up as much sun as I could. The bike ride to the gym isn’t very far so I knew I could do it and not worry about my knees. I was also close enough to home that if for some reason I couldn’t make it home, Michael wasn’t very far away to pick me up. Thankfully that wasn’t needed.

Michael made some adjustments to my bike seat. I think part of the reason my knees were irritated was that my bike seat was too low. But when it was higher I had back pain. So it’s kind of “try this and that” kind of thing to figure out the right spot. After making adjustments, I packed a backpack with my bike lock, my running shoes, my workout shorts and my weight lifting stuff (i.e. workout journal, gloves and resistance band for PT). 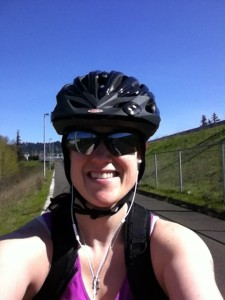 It was a gorgeous day! I was so ecstatic to be outside, on my bike, in the sun, and ABLE to ride. I rode to the bike trail and then huffed and puffed up the short but steep hill. I took it slow and steady and didn’t push it like I  usually do because of my knees. I made it to the top slightly out of breathe, my heart rate very high, but my legs were GREAT. I hadn’t lost all of my cycling stamina!!!! You have no idea how happy that makes me!

I made it to the gym and changed out of my bike shorts and shoes and got to work. I had some weight lifting to do. I did about an hour of weight lifting, physical therapy exercises and stretching. Then it was time to bike home. 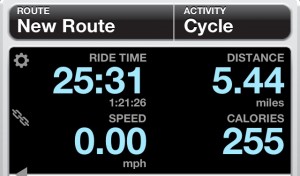 The bike ride to and from the gym was 5.44 miles and it took me about 25 minutes total. I didn’t intend to spend my whole morning working out and I definitely didn’t intend to burn the massive amount of calories I burned but it was all an added bonus. 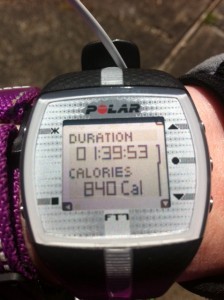 Michael and I wanted to spend as much time outside as we possibly could so we ended up having lunch at Los Gorditos Taqueria on SE 12th and Division. We chose that place because it has a big outdoor patio and all we wanted was to eat lunch in the sun. 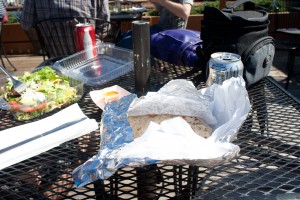 They had vegan and vegetarian items as well.  Michael got the tostadas and he said they were just ok– the meat was a little overcooked. But my burrito was great! I got the shredded pork burrito and it came with rice, beans, sour cream, onions and cilantra. My pork was juicy and not overcooked at all. They had a salsa bar and the salsa was delicious; ranging from habanero too hot to eat to mild and tomatillo. I liked it all and after burning 800+ calories I was starving.

We lounged in the sun and enjoyed our lunches and then enjoyed some of the “art” on the walk back to the car: 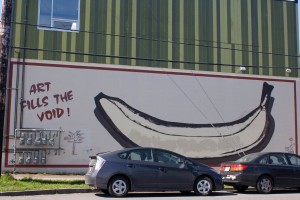 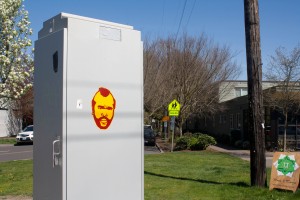 After lunch, Michael and I went downtown to walk around. We hit the PSU Farmer’s Market briefly; sat in a park; and just meandered downtown for awhile. There’s a park downtown that has a fountain and an almost life-size version of a chess set. 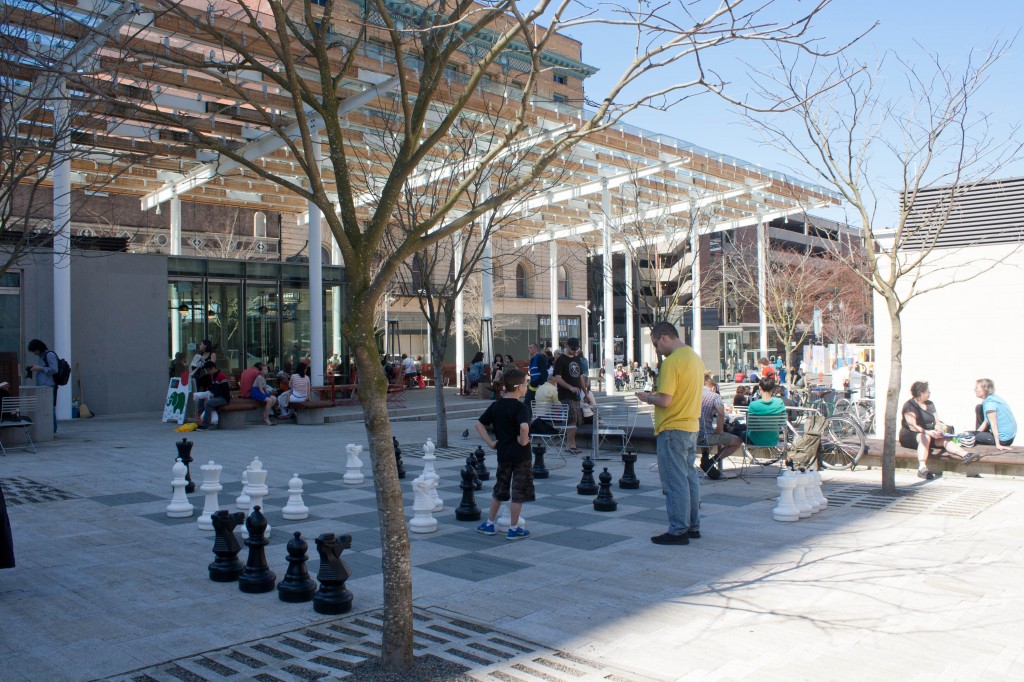 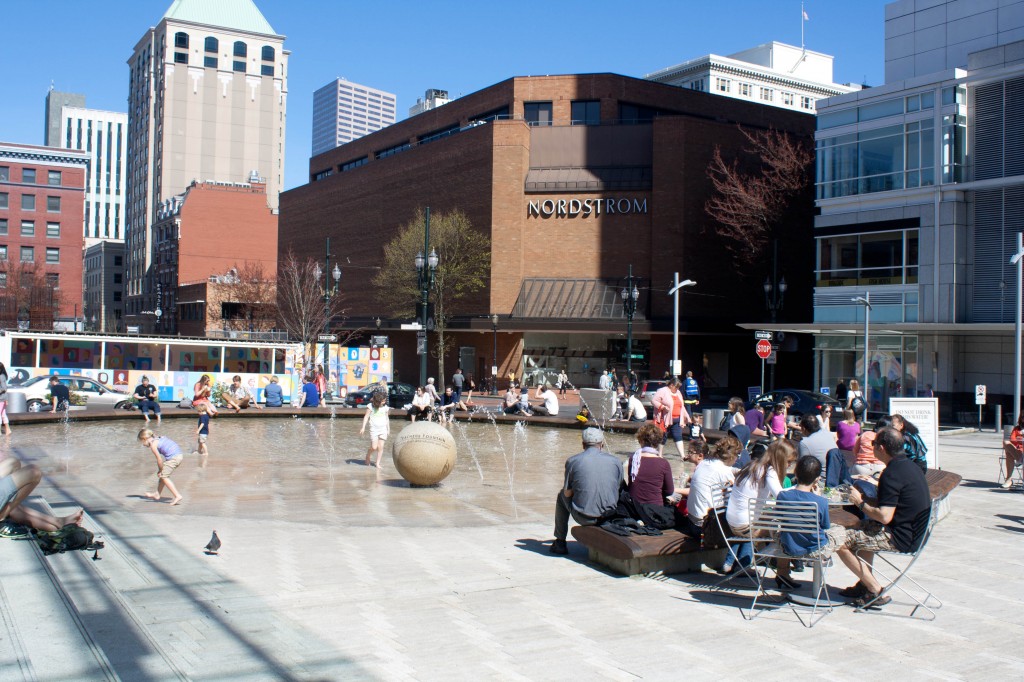 Everyone in Portland was outside enjoying the unusual weather. Trust me, this is probably the last time we’ll see weather like this until July. 😛 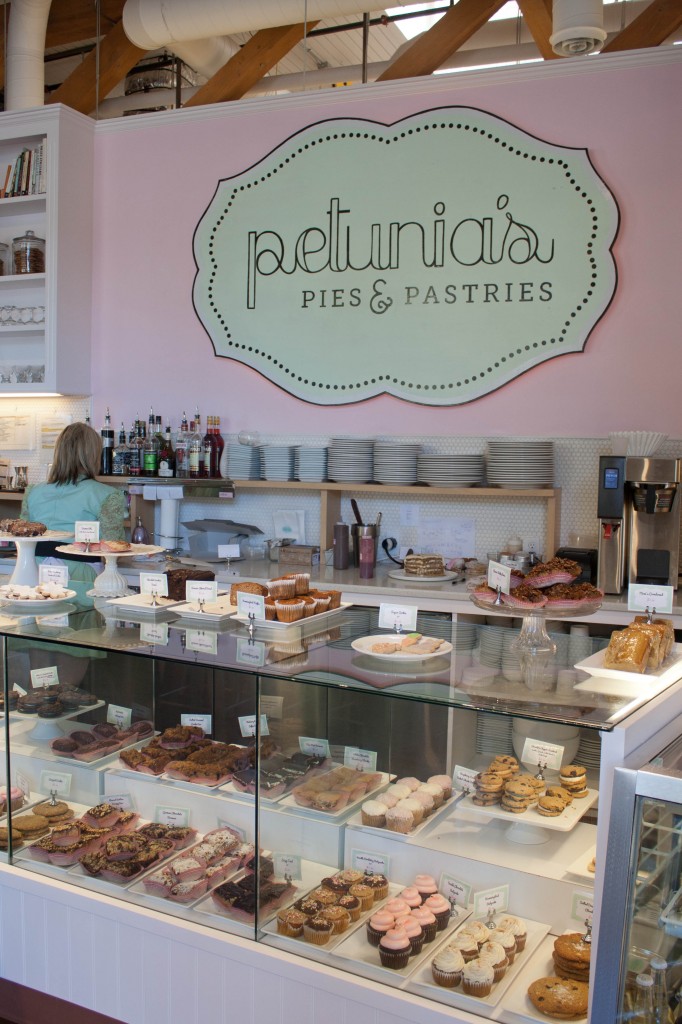 Our last stop was to Petunia’s for some dessert. We got it to go to eat later. All of their desserts were gluten-free and vegan. Michael and I wanted to try them out to see what GOOD gluten-free desserts should taste like…especially after some of the duds I’ve had lately. Petunia’s was a super cute dessert place. The staff was wearing cute sage green uniforms and the decor was just too hip for words. Loved it!

I got one Thin Mint Brownie and Michael got a slice of the Black and White Cake as well as a donut with sprinkles. 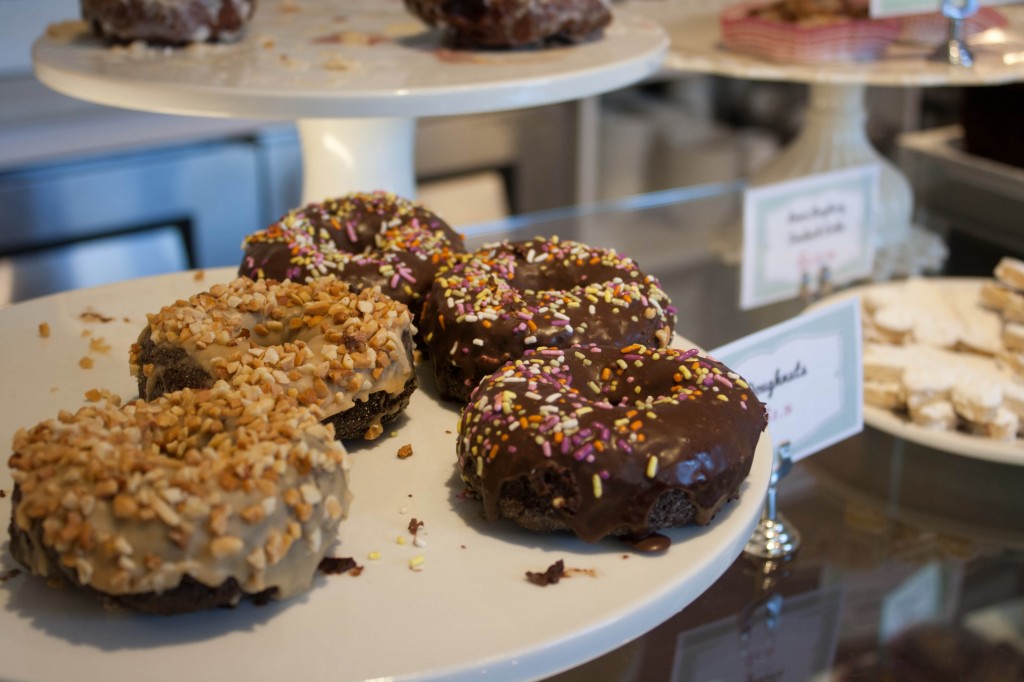 So how were the gluten-free vegan desserts? Well we ate a sensible dinner first, of course. Michael grilled up some chicken bratwursts and I sauteed kale with onions to go with it. I also made a spinach salad with Oregon gorgonzola cheese, freshly sliced strawberries and raw pecans. We sat outside on the deck as the sun started to set and ate our dinner and then excitedly tore into the dessert box. 🙂 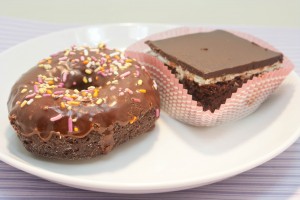 Michael liked his donut a lot. I had a bite and it was pretty good. It was really dense and heavy feeling. My brownie had good flavor but it was really dry…Oh well.

On Sunday I went for a swim before we went to Michael’s mom’s for brunch. She made her famous crab casserole and a ham; Michael made the potato dish and there was coffee cake, fruit salad and white wine. I ended up skipping dinner because I was so full. 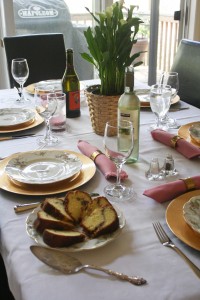 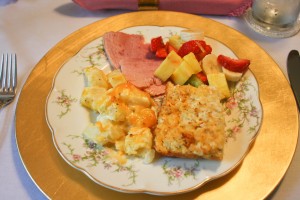 Easter Sunday was just as gorgeous as Saturday was–a little cooler temperatures though. Michael and I spent the rest of the afternoon working in the yard. Fat Kitty also got to play outside! It was such a sunny day and I knew he was dying to go outside so I gave in. 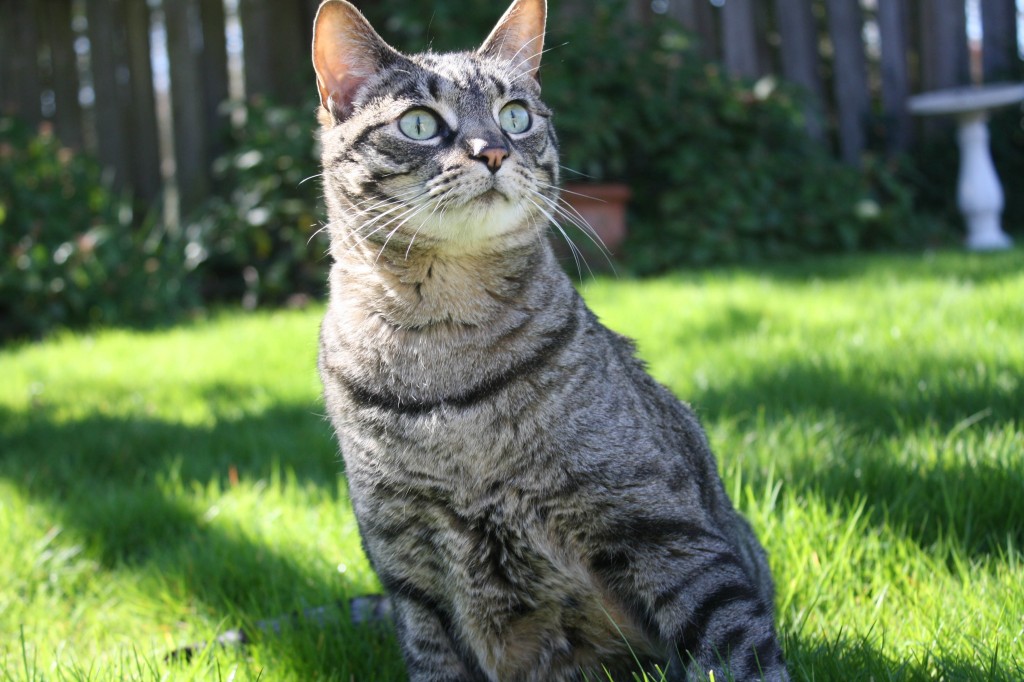 Both of my cats are indoor only. This is because I’m overprotective, but also because I’ve always lived in busy city areas and didn’t want them to get hurt. When I moved in with Michael in the suburbs I could have let them outside but I chose not to. The truth is, indoor cats live longer and I want my babies to be around for a long time. There’s also coyotes in the neighborhood! 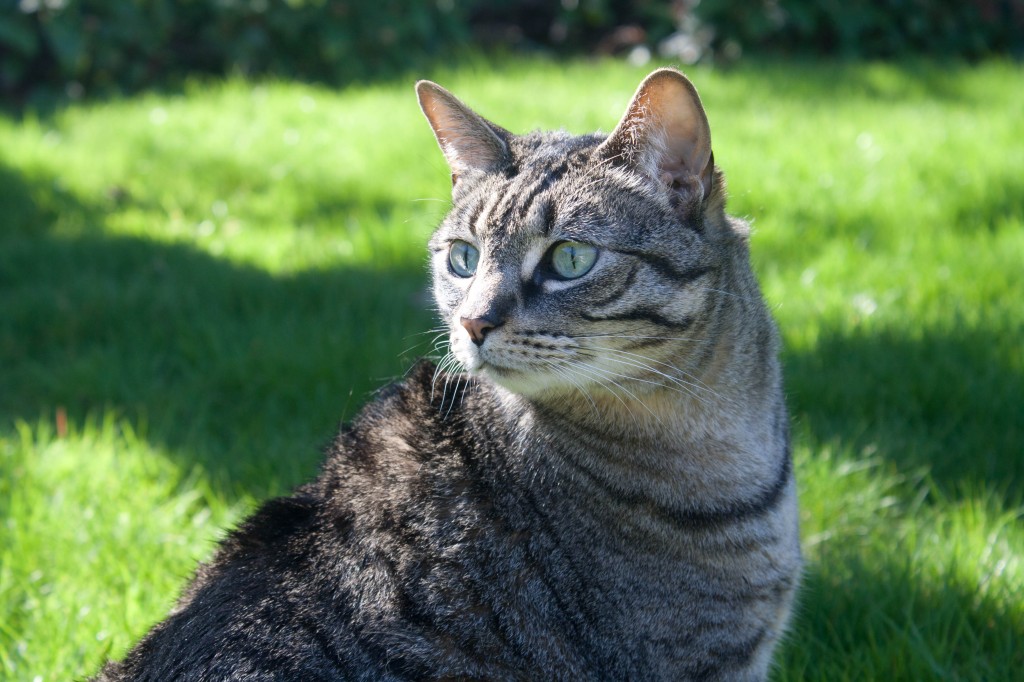 We had some nice playtime outside until Fat Kitty decided to make a run for it. He ran toward the deck and I snagged him up to go back inside. The last time I let him outside he crawled underneath the house and I spent a few hours trying to get him to come out! Another reason he doesn’t go out very often. Silly boy.

What a fabulous weekend. It was too short and the nice weather made me wish it was SUMMER!!! How was your weekend?

18 thoughts on “A Taste of Summer”