I’m routinely impressed with how stellar the food is at the Portland food carts. It always makes me wonder why they don’t have a brick and mortar restaurant.

A friend posted on Facebook about the cart on 32nd and Hawthorne, Carte Blanche, last Friday night. I checked out the menu and when I saw their BBQ chicken bowl I was immediately obsessed with going there. Because their menu rotates I knew I had to get there ASAP. Saturday I woke up still thinking about that place. I went to the gym (had a super awesome workout) and then off we went. 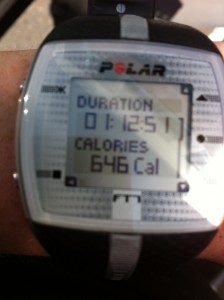 We both ordered the Mischief Bowl. It was apricot BBQ chicken in a coconut quinoa with vegetables. The place was hopping but we found a shady spot on the picnic bench to wait. I was drooling as I looked at other people’s dishes. 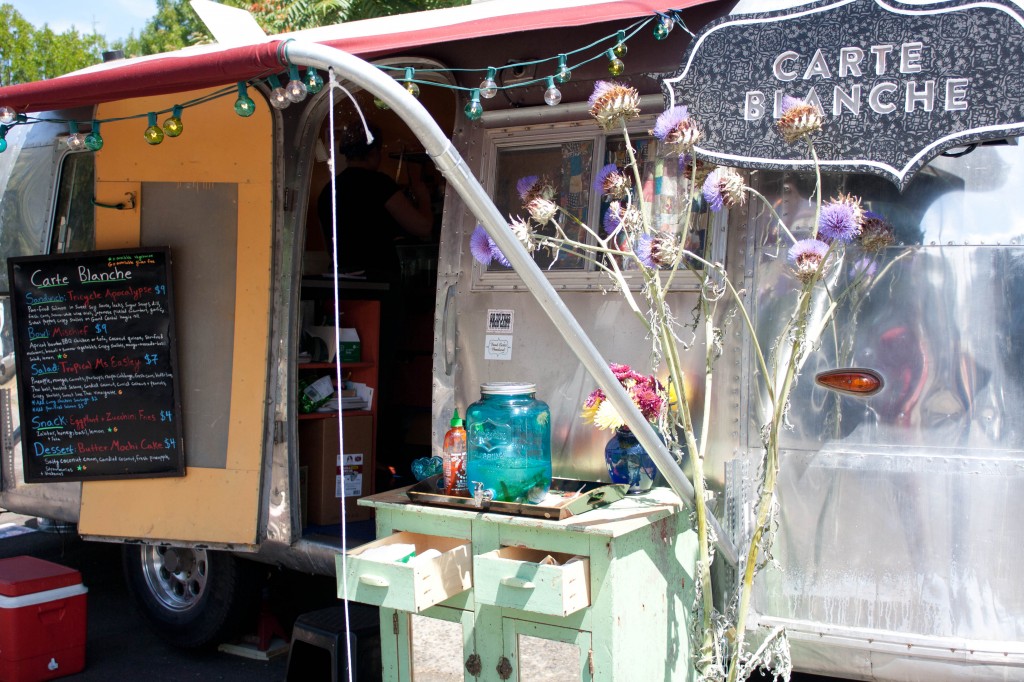 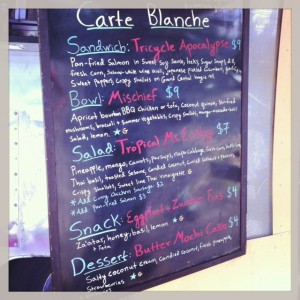 Finally it came out. It was probably the best chicken I’ve ever eaten, even better than the amazing bourbon peach BBQ chicken my cousin had at her wedding.

The chicken “nuggets” were dredged in rice flour with seasonings and sugar. I think they used brown sugar because that was the taste and texture. The chicken was really unusual in texture, crispy and crunchy and not like the normal fried chicken. It was sweet but not too sweet. 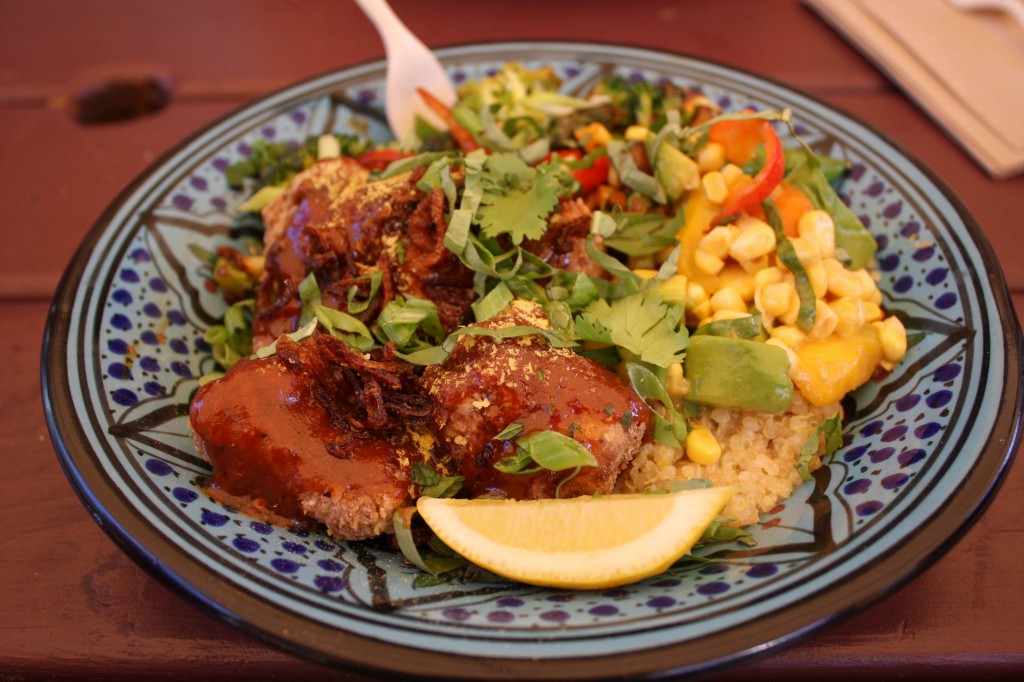 The chicken was nestled on the coconut quinoa. There were fresh peppers, corn freshly off the cob, broccoli and pea pods so crunchy it seemed like they’d been picked that morning. Everything was so delicious I couldn’t stop eating–but I forced myself. I ate half and took the rest home. 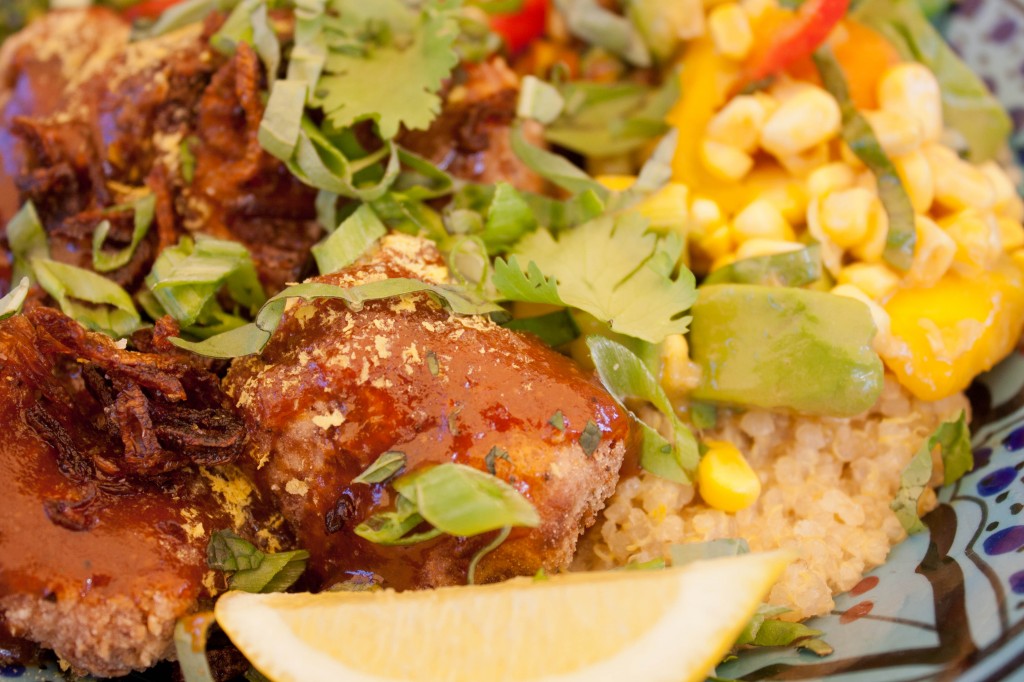 I asked Michael if he wanted to go back again for dinner. 🙂 He thought that was a little extreme. But seriously, I would have eaten it again later that day! I cannot get over how odd and awesome the crunchy chicken was. I wonder if I can recreate it at home…

Unfortunately I did not make it at home. The next day, Sunday, Michael and I had some friends over to be guinea pigs for our first attempt at doing ribs! Michael got racks of pork ribs from Costco and I went to the store for the BBQ sauce. We already had mesquite rub so I bought a bag of mesquite wood chips for the grill and a bottle of Stubb’s Mesquite BBQ sauce. It was the only sauce I found that didn’t have HFCS as the first ingredient (it was made with real ingredients and real sugar) and was also gluten-free. 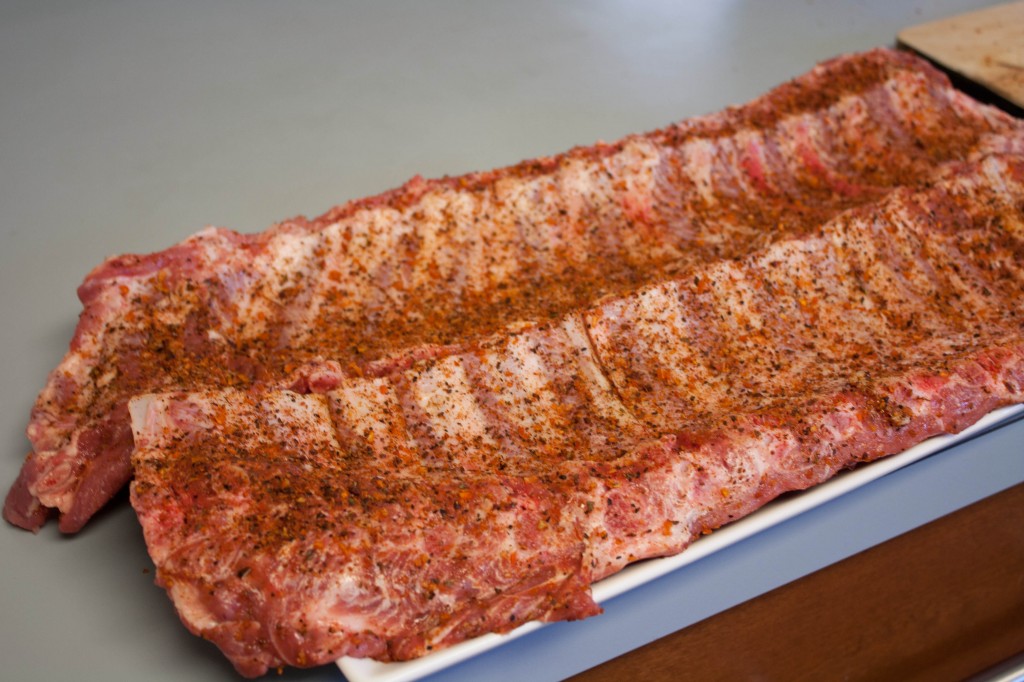 This is the recipe that Michael used, but basically he just used the preparation and grilling instructions. It was very long and involved. While Michael and his friend Mike were being manly and cooking the meat, Susanna and I got pedicures. 🙂 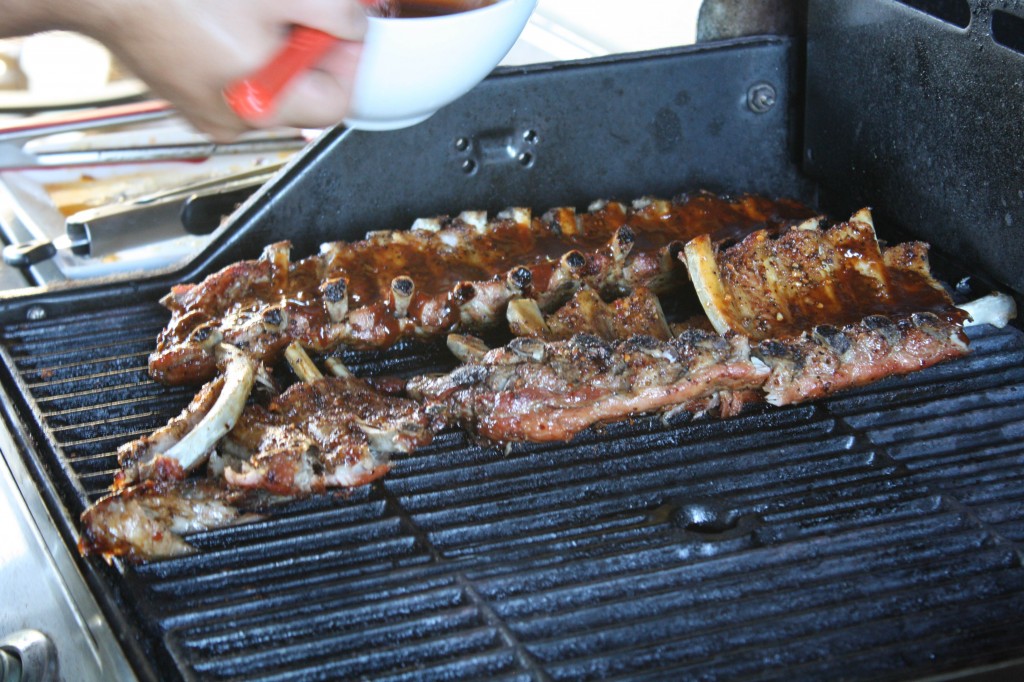 The ribs grilled for a long time and by the time it was ready to put the BBQ sauce on, the ribs were basically falling apart, as you can see on the front of the grill in the picture above. Mike and Susanna brought corn on the cob and the stuff to make a salad (all from their garden). To prepare the corn I cleaned it up then put it in foil, slathered some butter on all the sides, seasoned with seasoning salt and pepper, wrapped up the foil tight and then grilled it next to the ribs. The corn turned out great! (Although, I just saw this video and want to try this method next time.) 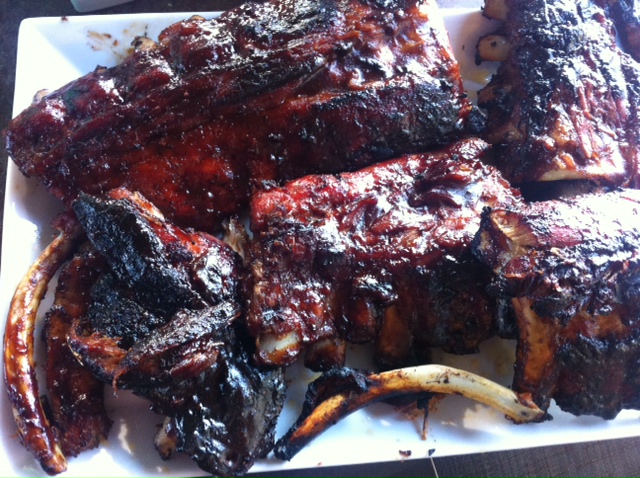 There were a few crispy pieces of rib meat but overall it turned out perfect. It was falling off the bone (as you can see the bones on the plate) and the meat was tender and flavorful. I loved the Stubb’s BBQ sauce and will use it again. Maybe next time I’ll try their Hickory Smoked flavor. 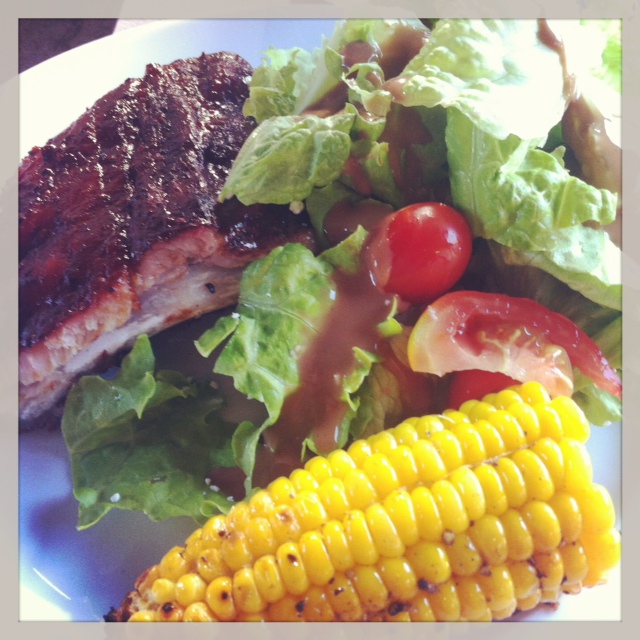 I had three helpings of salad. I was famished. Sunday was a busy day for me — I went swimming and kicked ass in the pool (three different people complimented me on my speed!) and then spent a few hours pulling weeds in the garden. It was a hot, hot day and I felt an insatiable hunger and thirst pretty much the whole time.

This was the perfect summer dinner–ribs, corn and salad. YUM! I could have eaten a gallon more of that stuff. I was pleasantly full by the end–there were definitely no leftovers–and we just chilled in the fading sun of the summer night. 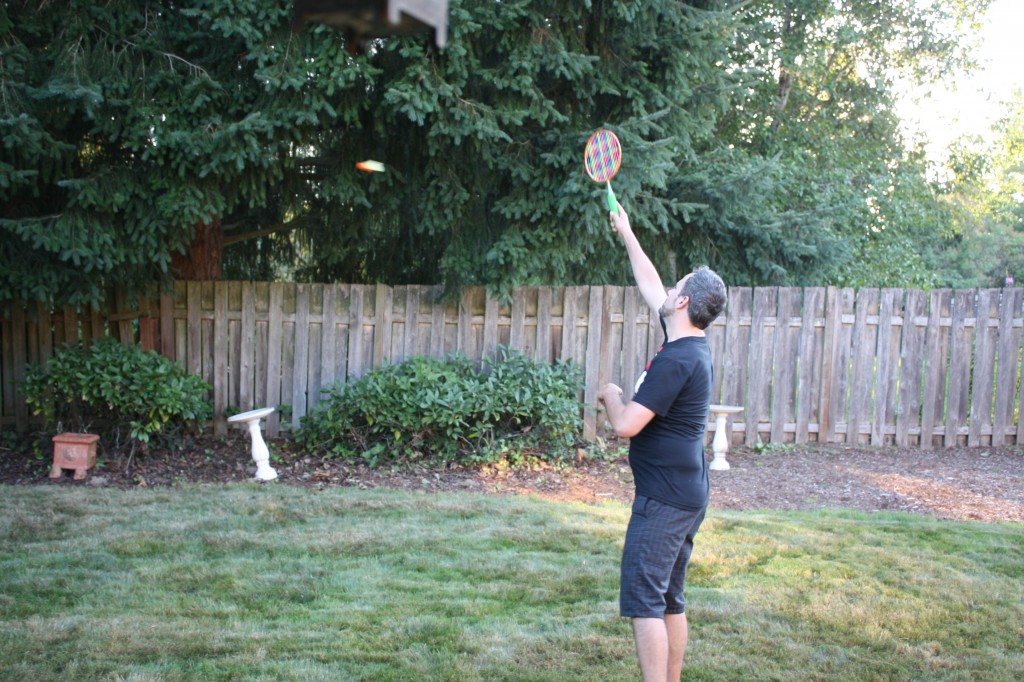 I’d also purchased a bocce ball set and a badminton set and Michael and Hans (the 5 year old) were playing badminton like it was The French Open. I got in there and played a few rounds, too. Fun! What a good end to the weekend!