What a nice weekend! It was sunny and warm, we went out to lunch at the food carts, and we got a ton of stuff done around the house, plus it was nice to just hang out in the backyard. Yesterday I pulled weeds and cleaned out the raised beds to get them ready for veggies next month and Logan played in his little car, his slide, played in the dirt and threw the ball for Bella. Everyone was happy! (Although I’m paying for it a bit today with my allergies!)

Our very old fence has been slowly falling apart and the last two winters had some bad storms that basically blew it down in sections. Thankfully the whole thing didn’t fall over, and thankfully Bella is a good girl and doesn’t escape when she’s out in the yard by herself.

We recently got the broken sections replaced and it feels so good to get one more thing off our “to do” list!

And I’m glad we didn’t have to do it ourselves.

I really wanted to make some pickled radishes over the weekend. I found this recipe and gave it a try last weekend. It was pretty easy to do, even though I got rid of my mandoline slicer a few years ago (darn it!). It only took a few minutes to get everything together and then cook the liquid. 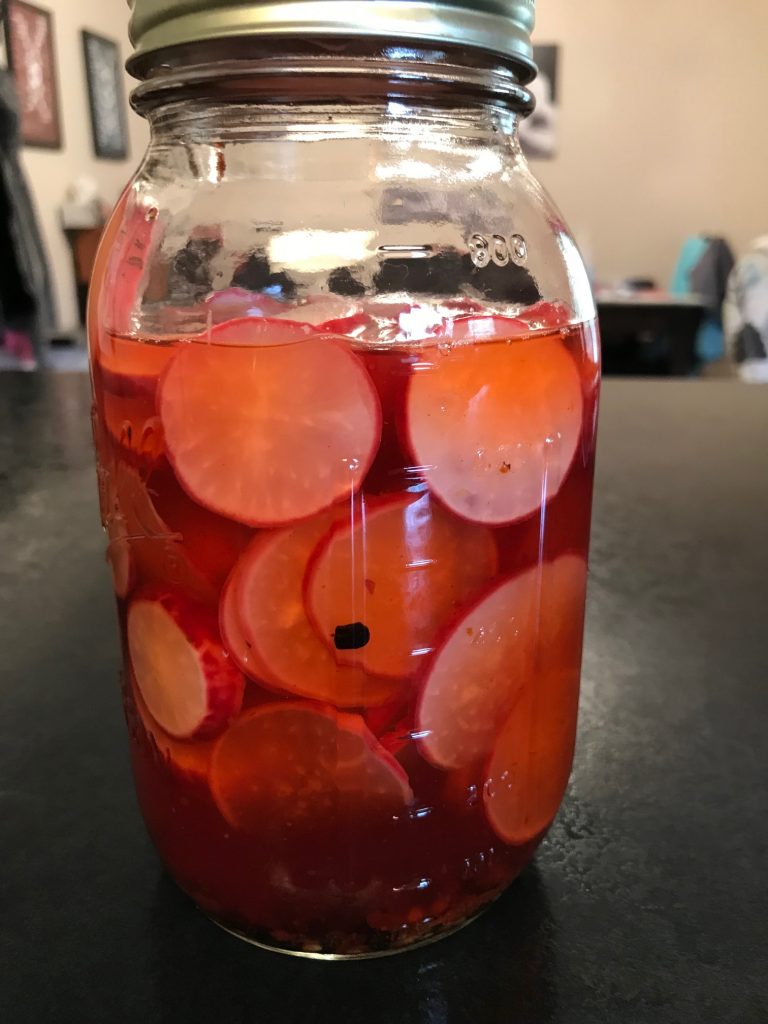 After a week I was able to try them. They turned out great! They were really spicy!

I tried Kombucha once a few years ago and I did NOT like it. It was gross to me and then I never tried it again. I couldn’t understand why it was so popular! But recently I randomly tried some berry flavored Kombucha and it was really, really good. I get it now. LOL

So I’ve gotten some random flavors to try and see what I like. Kombucha is really healthy and good for gut health, which is why I wanted to give it a try again. I want to do more to have good gut health. I love kimchi and sauerkraut but you can only eat so much of it. 😉

Please tell me your favorite brand/flavor of Kombucha so I can check it out! 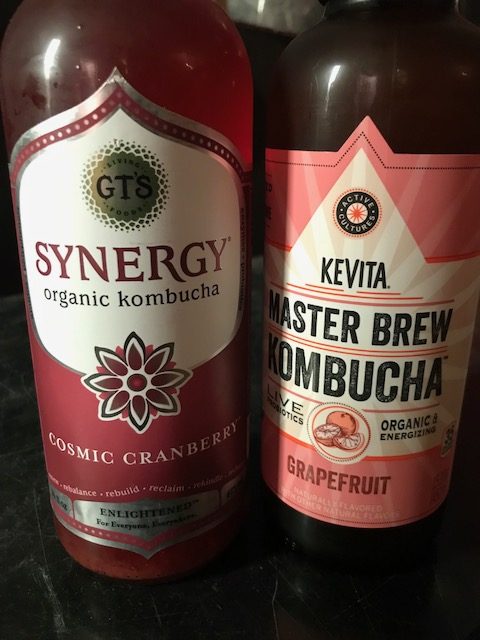 I’ve been watching a friend on IG make her own sourdough bread for awhile now, jealous because I’ve always wanted to make my own bread. Especially sourdough–I feel like it’s really healthy (much healthier than regular bread you buy in a store). I recently asked her for some sourdough starter and she gave me some and instructions.

So last weekend I got the starter and “fed” it. I am really excited to experiment. The starter smells SO good!

This is the recipe my friend suggested: Easy Sourdough Artisan Bread. I’m hoping to make our first loaf in a few weeks!

Logan has had several haircuts since his first birthday but this was the FIRST haircut where he sat on a booster seat all by himself (without me having to hold him). He did such a good job! I was so proud of him. 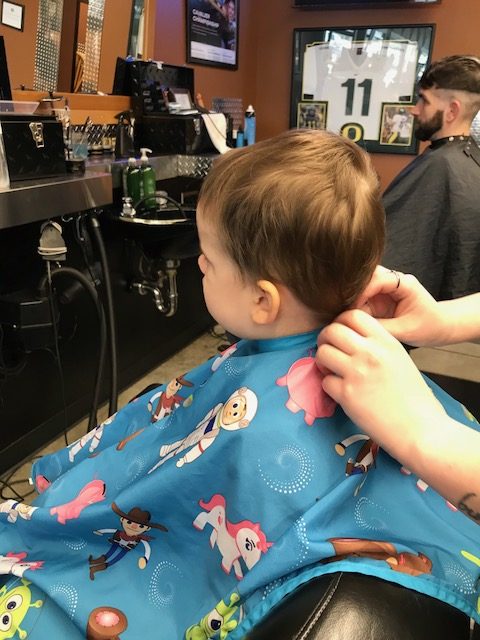 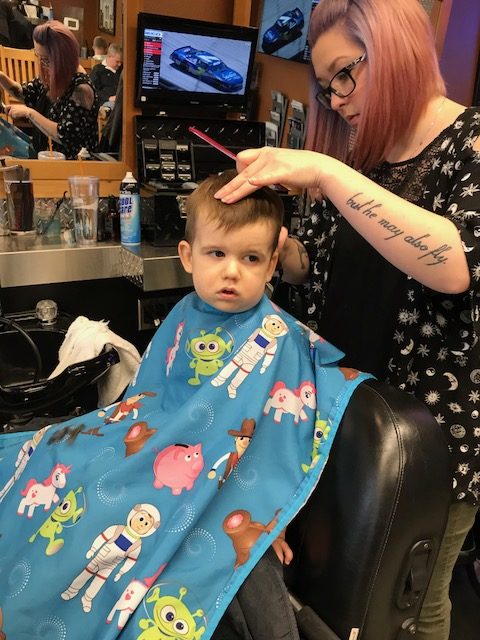 Also, Logan helped me make a cake. He loves helping in the kitchen. 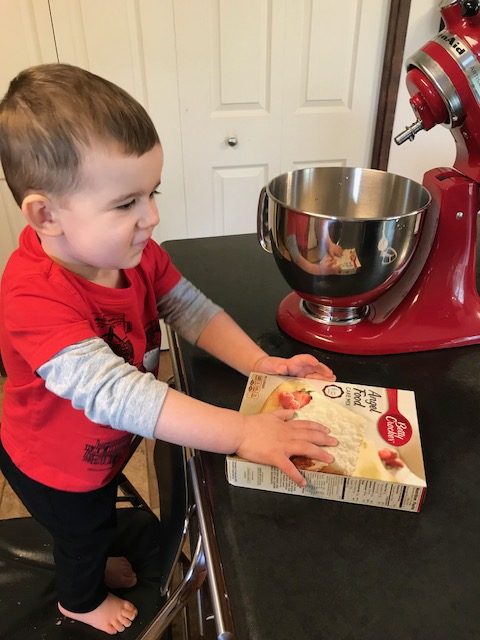 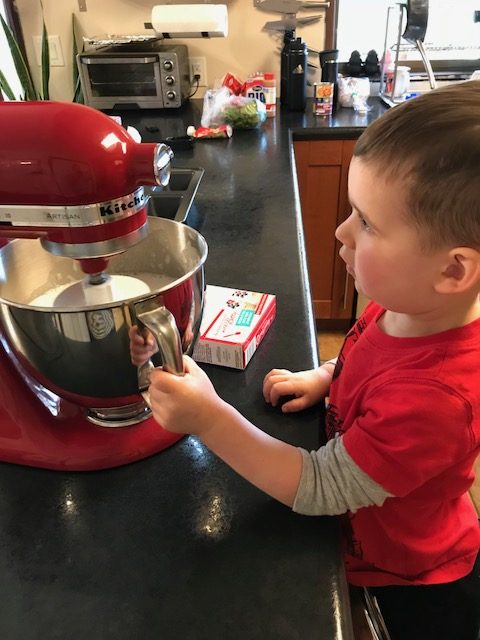 How was your weekend?

Remember how I said that Friday nights were always my gym nights? And while it was nice because the gym/pool was empty, it kind of sucked for “fun” on a Friday night. Well this last Friday we had a different kind of Friday night and it was so much fun!

It was kind of a humid, gray summer day but the evening was nice. I got home from work and Michael said we were going out. Logan had been fussy fussy fussy all day long. I figured he wanted to get out of the house. He didn’t tell me where we were going and after feeding the baby we left.

Turned out we were going to explore the food carts on SE Division Street. Division has exploded in the last few years with tons of new restaurants, condos, etc. It’s a completely different neighborhood than when I lived over there. I’ve been wanting to check out some of the new popular restaurants on that street for a long time but I always talked myself out of it for some reason (traffic, parking, crowds, long lines, etc).

There were a ton of food carts in this little area with a bunch of picnic tables and a beer garden. The place was packed! And it was a really popular place for people with kids and babies. I love that this is an option for eating out when you have a young one.

We walked around and checked out the options and I decided to get something from the Korean-Hawaiian food truck, Namu. I ended up getting the Bulgogi Beef plate. It was spicy beef, rice, kimchi, spinach, cucumber and avocado. It was between that and the vegan bowl with toasted tofu–that sounded really good, too. (My original choice was going to be the waffle truck that sold sandwiches made out of waffles–but I reasoned with myself and decided that wasn’t a good idea diet wise. LOL)

My dinner was really tasty and spicy, but I did kind of have food jealousy over Michael’s dinner. 🙂 Michael got pizza from the pizza food card (I don’t remember the name, sorry). They cooked their small pizzas in a wood burning oven.

We found a table with another couple and their toddler and asked if we could share and they said yes. (And then I asked them about their super cool detachable high chair seat thing that just clipped onto the end of the picnic table–brilliant!). 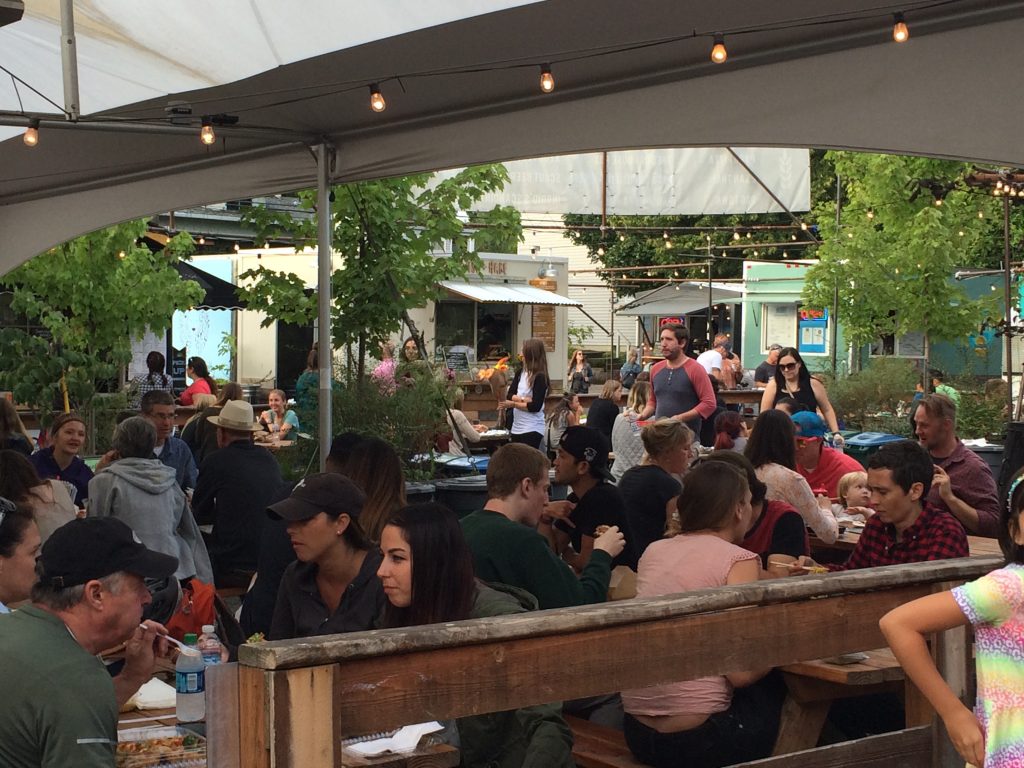 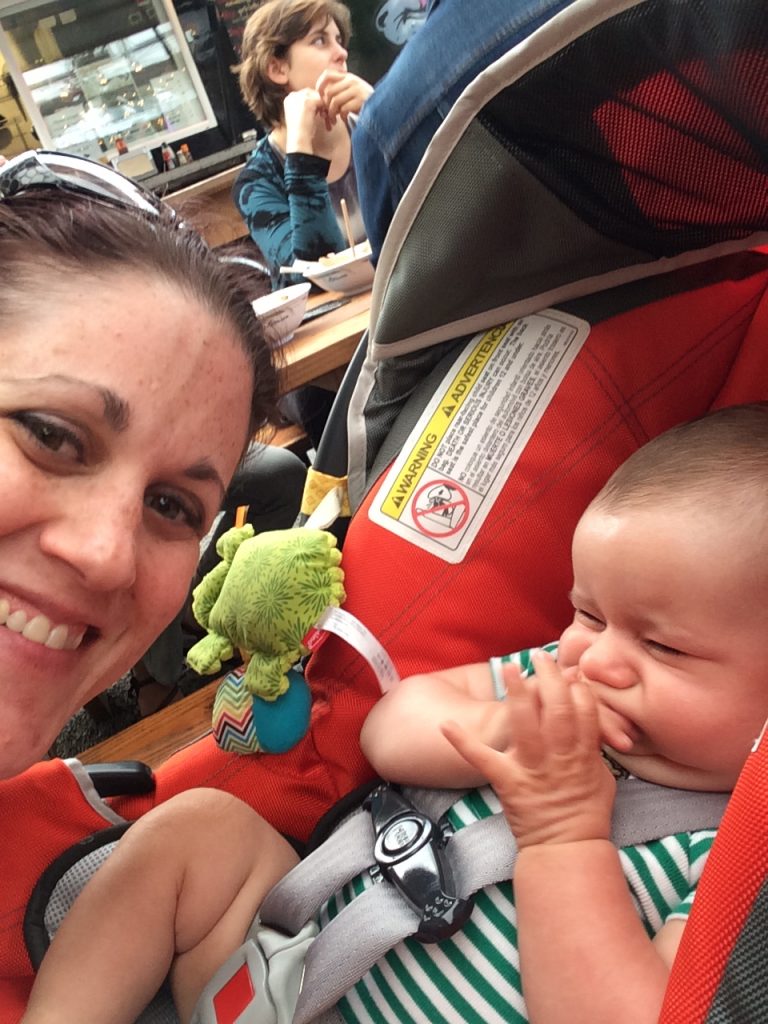 Logan did great! I think there was so much going on and so much noise that he wasn’t fussy anymore. He just chilled and checked everything out and let mom and dad enjoy their food.

I had a few bites of Michael’s pizza and it was REALLY good. I loved the crust. They nailed it.

We enjoyed a Crux Double IPA beer from the beer cart. PERFECT! It really hit the spot. And it was strong (at least for me). One was enough. 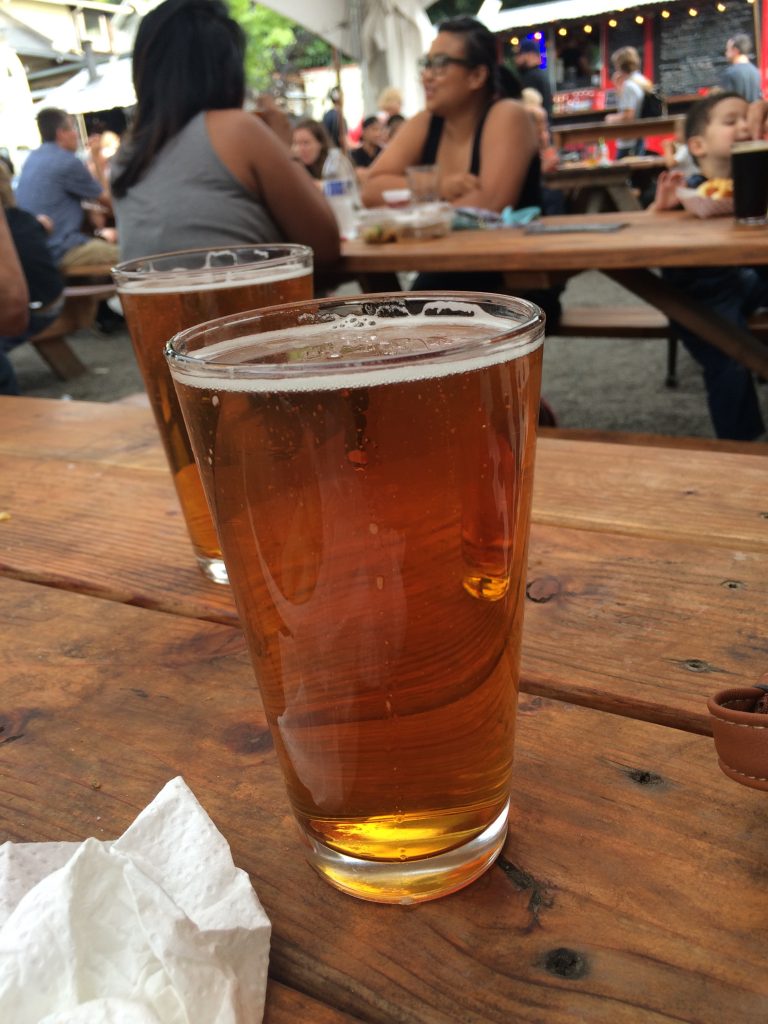 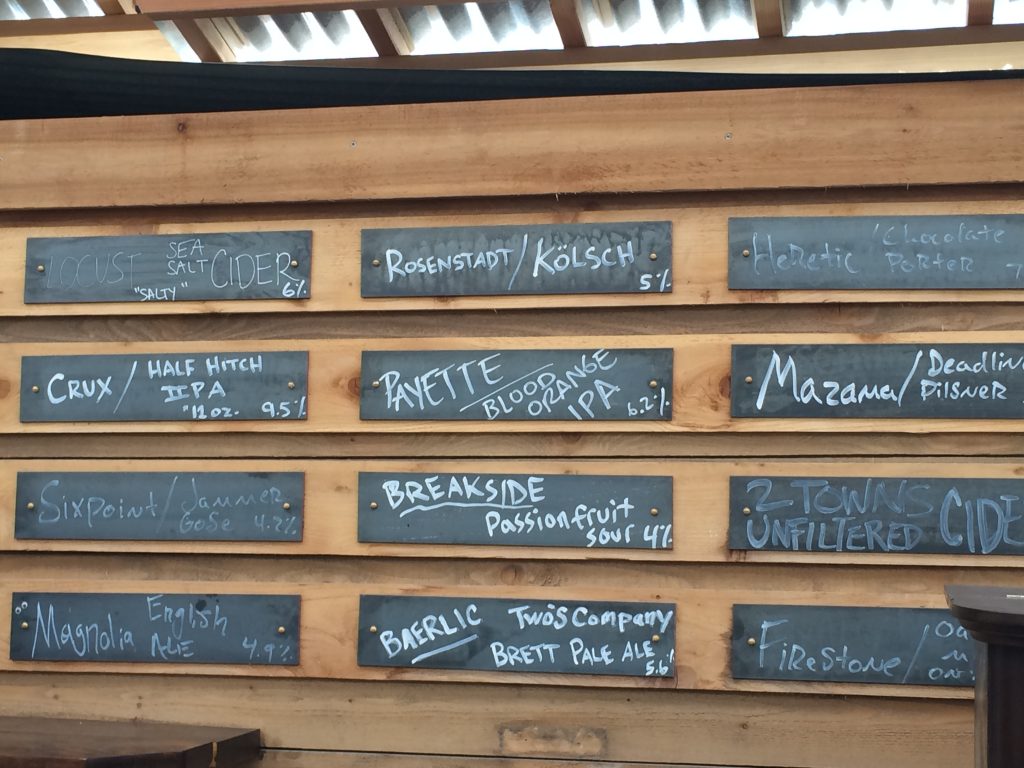 We finished eating and Logan was getting a little antsy so back in the stroller he went. We decided we wanted dessert and there was a dessert truck but it was vegan and that wasn’t really what I was feeling. So we decided to walk up Division Street and see what other options we had. It was so nice out, too, we didn’t want the evening to end yet. 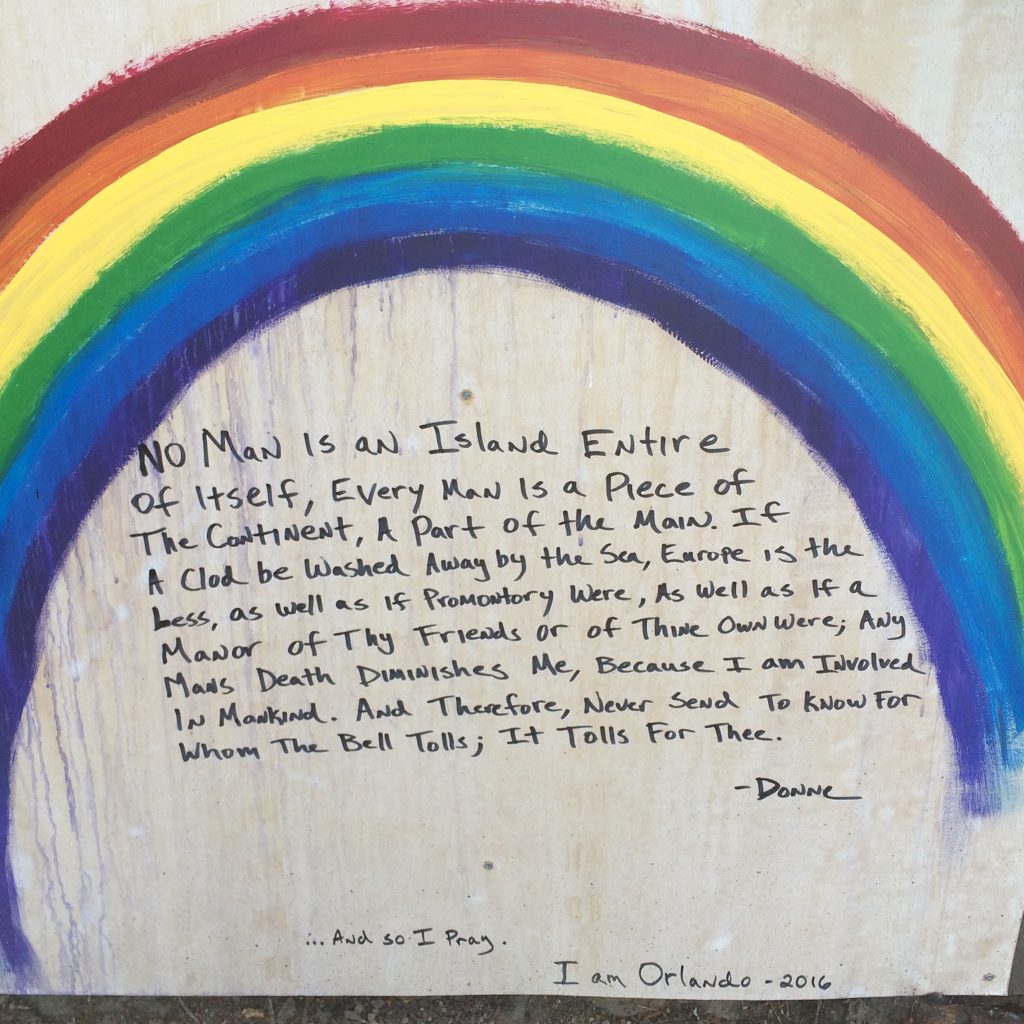 I like this neighborhood. It’s hip and popular and there were tons of people and art all over the place. It just has a cool and inviting vibe (like I said, a lot different than 8 years ago when I lived near there). It was fun just being out on a Friday night with all these young, carefree people out on dates. 🙂

We walked up the street and past Pok Pok, where the line was at least 2 hours long, it looked (there is always a long wait there) and then we ended up at Salt and Straw.

It’s a super popular ice cream shop in Portland. I’ve had their ice cream before at events and it was good but I never understood why the lines were always so long. And if you’ve been reading my blog for awhile you know how much I hate long lines for restaurants. There are just too many good places in Portland to stand in line for over an hour. No thank you! 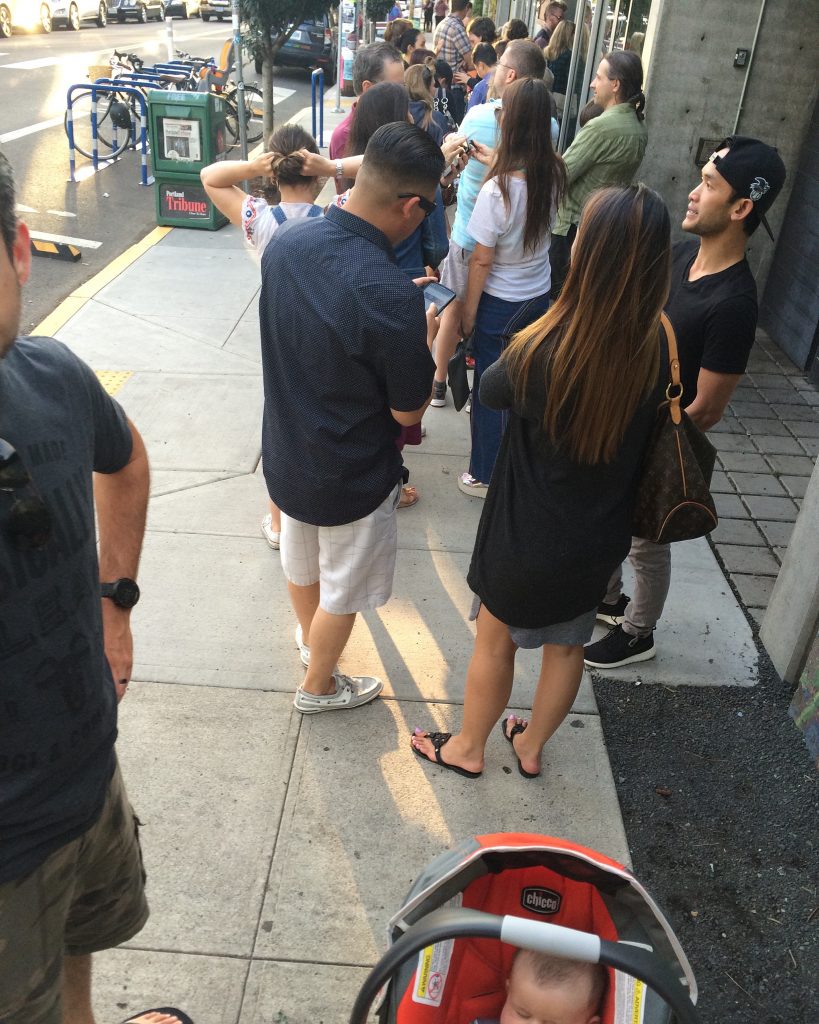 But we didn’t have anything else to do, so why not? And the baby was sleeping! The line actually moved fairly quickly and as we waited we tried to figure out what flavor we wanted! And tried not to drool at the aroma of waffle cone as we stood in line… 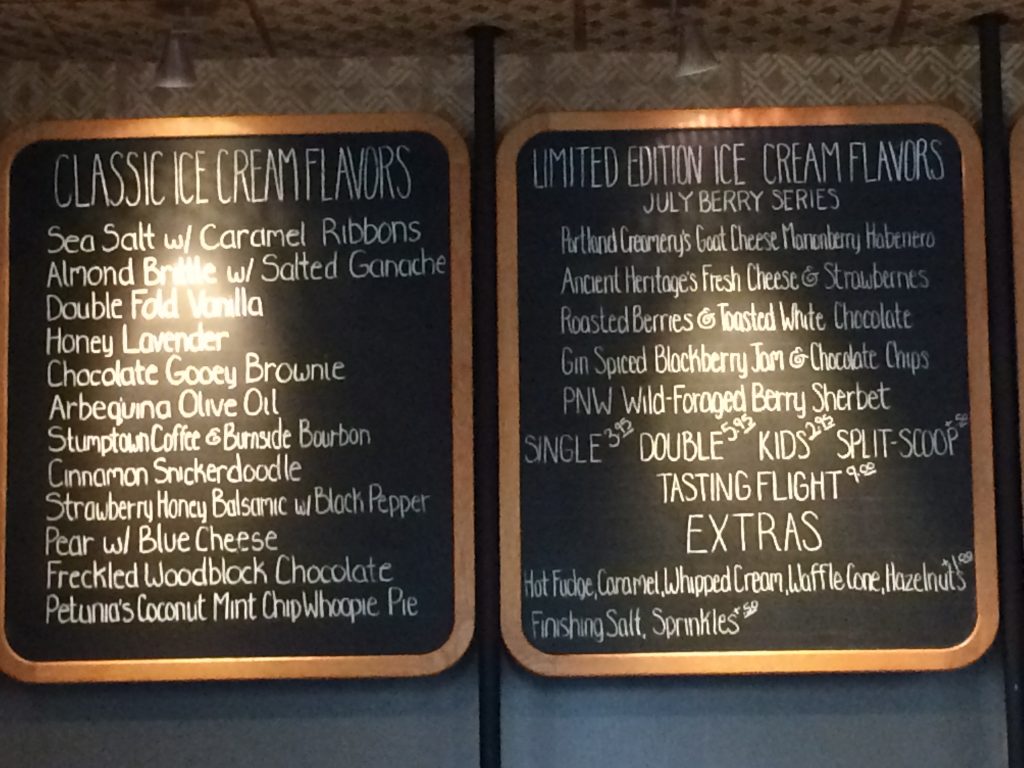 We got to the counter and they said we could have tastes. Michael tried the Pear and Blue Cheese and said it was amazing so I tried it and it was just ok. He got a taste that was all pear and I got a taste that was all blue cheese. It wasn’t overpowering but it just wasn’t for me. I tried the Goat Cheese and Marionberry with Habanero and it was FANTASTIC! Loved it! The heat was at the very end and it wasn’t crazy hot, just the right amount. But I thought it might be too much in a full serving. 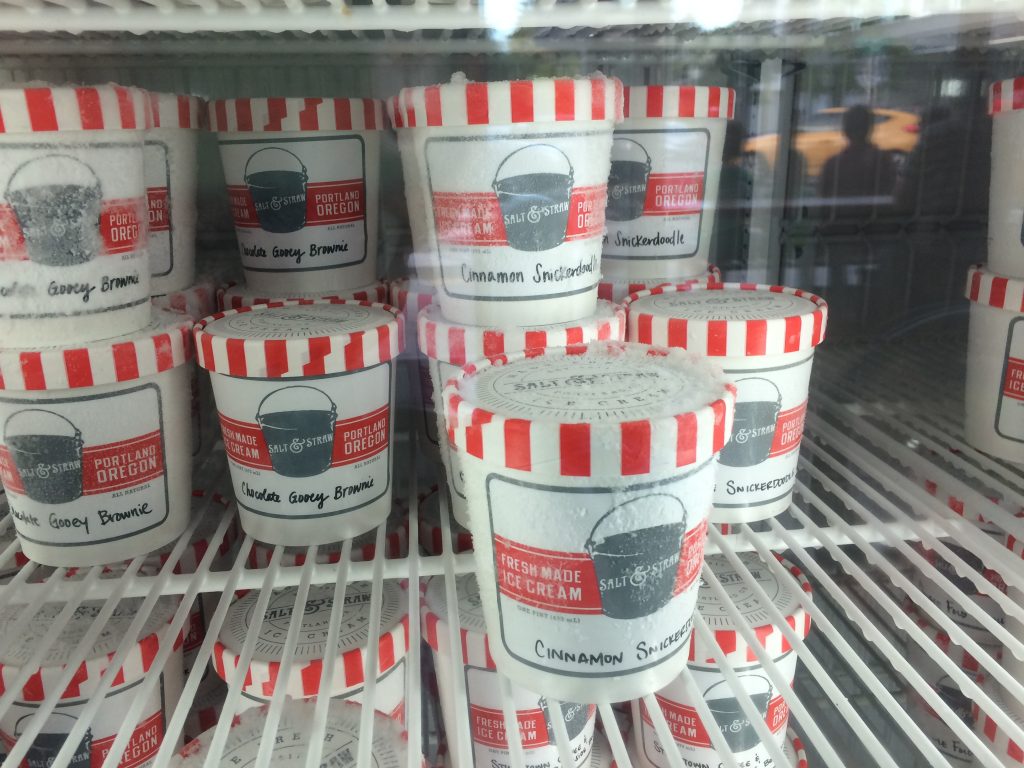 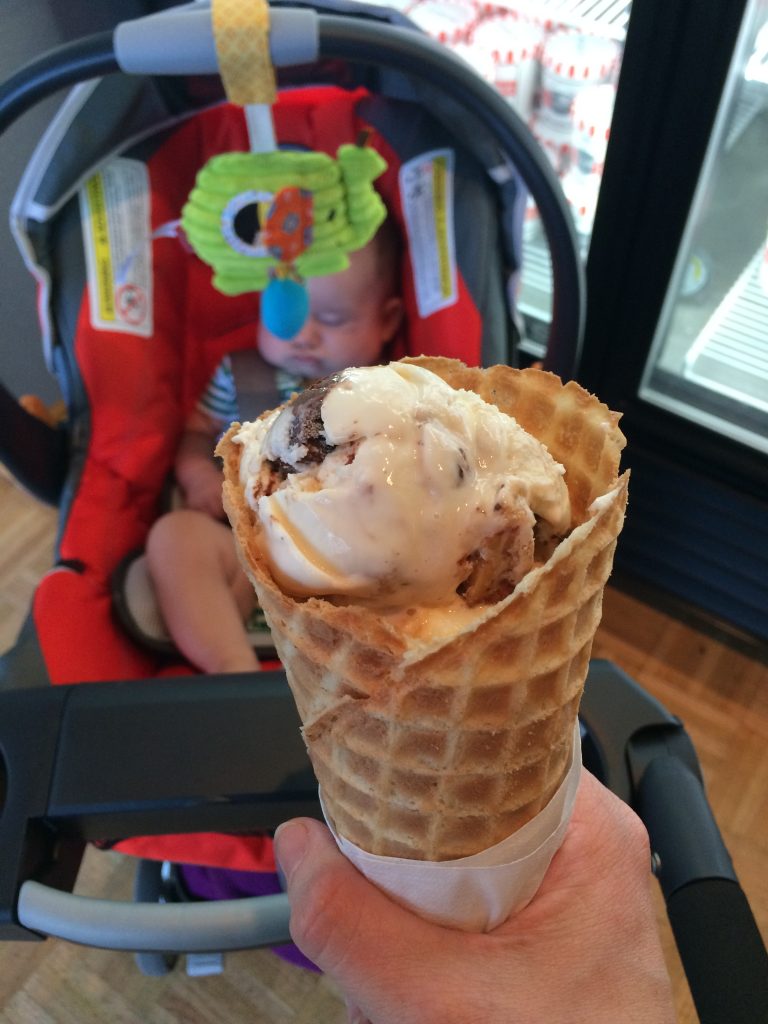 Michael got the Chocolate Gooey Brownie, I had a bite and it was good but I won at the ice cream selection. 🙂 We walked around and ate our ice cream in the warm summer evening and then Logan started to wake up and it was time to go home. 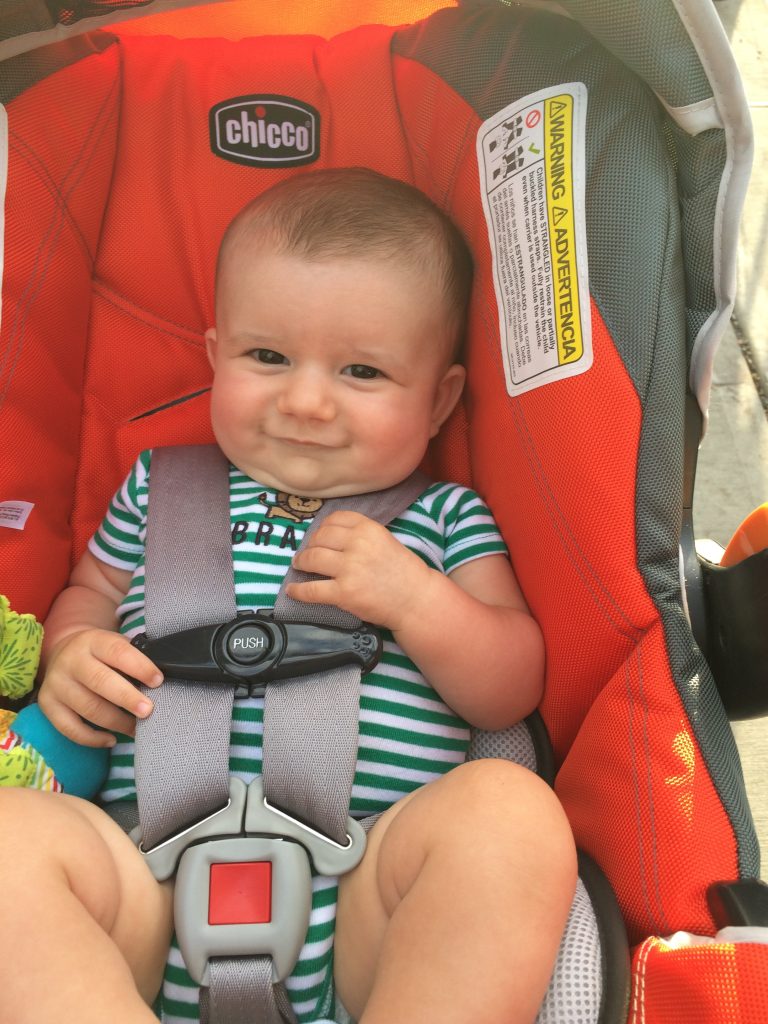