Not sure what’s going on with my body right now, at least it’s not back, right? Yep back is a lot better. I’d say it’s 90% better. Once in awhile it feels slightly tight but nothing too bad. Friday I went for a swim and noticed that my right glute had a knot in it and swimming the breast stroke was really bothering it. I kept swimming and thought maybe it would loosen up, whatever was going on, but it didn’t. I stopped doing that stroke and stuck with the other ones.

Saturday I slept in (it was glorious) and awoke to the sound of a wind storm. It was going to be a rainy, stormy weekend in Portland and I was kind of looking forward to that. Anyways, I went to the gym and did my weights. I even added back the kettlebell swing into my routine after a break since my back issue. Everything went great until I did the one legged Romanian deadlift and my glute started bothering me again. I have no idea why or where it came from. 🙁

I skipped running on the treadmill even though that was the plan and did the elliptical instead. That did not bother my butt, so that’s good. But pretty much the rest of the day the knot in my butt kept bugging me. What the hell! It’s not painful but more uncomfortable and annoying. I hope it goes away soon… 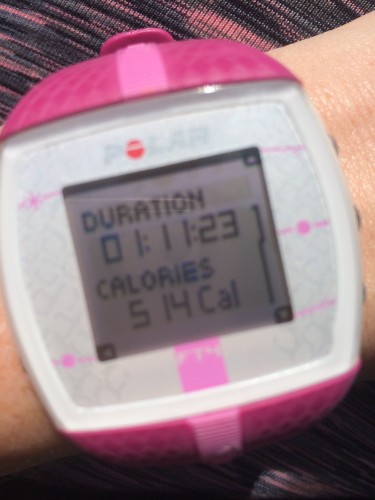 Calories burned: 514. The rest of the day was uneventful–the usual chores, laundry, errands, etc. But Saturday night I had a dinner date with a good friend!

I picked her up and we went to the Original Taco House. I hadn’t been there in ages! I used to go every once in awhile when I lived near it (before I moved in with Michael) and it was always good food. I was happy to go back when Debby suggested it. 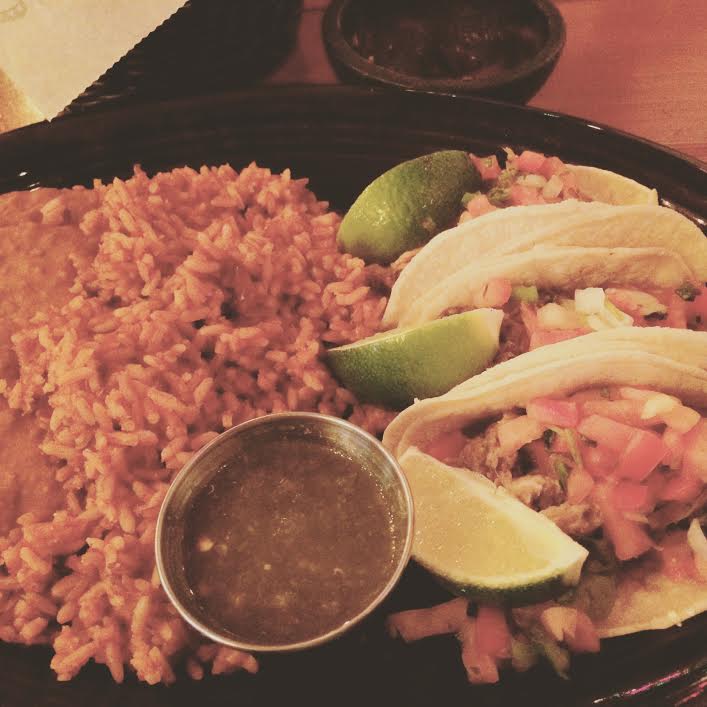 It was nice to spend time with my friend. Bonus: they gave us some crunchy churros for dessert!

Another pain in the butt? Bella is apparently going through a chewing phase. Again I say, what the hell?? Little Miss-Behaving is clearly unhappy about something. Or bored. She’s done SO well for years. She was never really into chewing and destroying things. Then all of a sudden she’s getting into stuff. This time? She chewed Michael’s plastic water bottle to pieces. Little stinker. She has plenty of toys and stuff when we’re at work. Things she can safely chew. Not sure what’s going on here. Any ideas/tips? 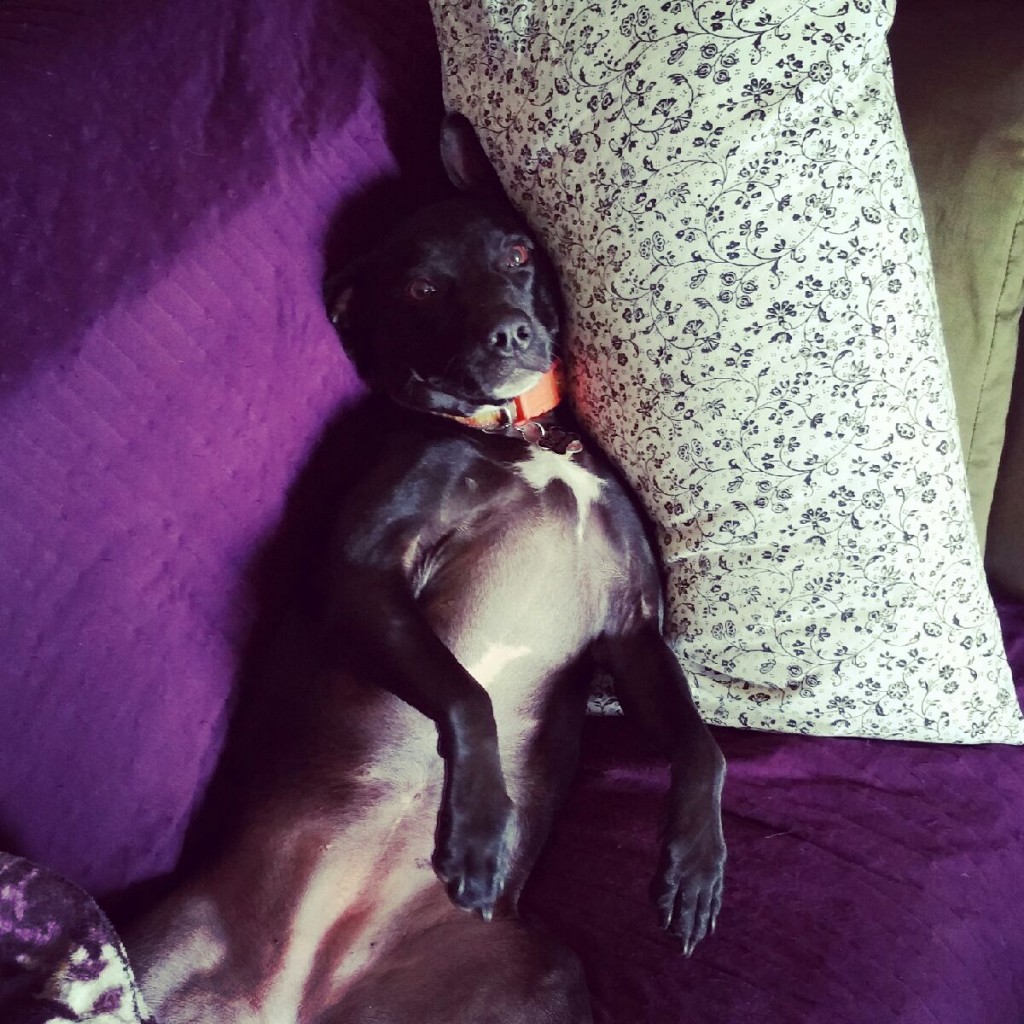 Sunday morning I was awoken early to Bella throwing up. Examination showed a few pieces of the water bottle. SIGH. More on that in a minute.

Guess what? Our power went out Saturday night. So we had no power, Bella was sick. The vet didn’t open for a few hours. She was acting normally despite throwing up, ate her breakfast no problem. Since we had no power and couldn’t cook anything, we went out to breakfast. It was not a great experience. I was worried about Bella and just grumpy about the whole thing. Little did I know it would get worse. 🙁 It was pouring rain as we drove to the restaurant (thankfully my car was in the driveway because of course, can’t open the garage door to get the other car out without power!). 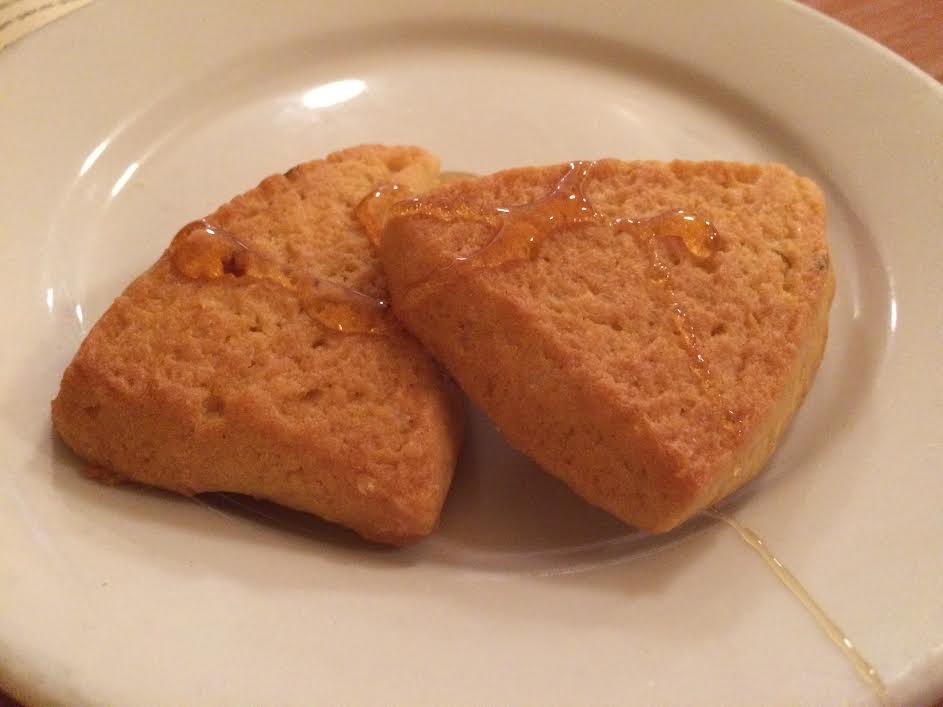 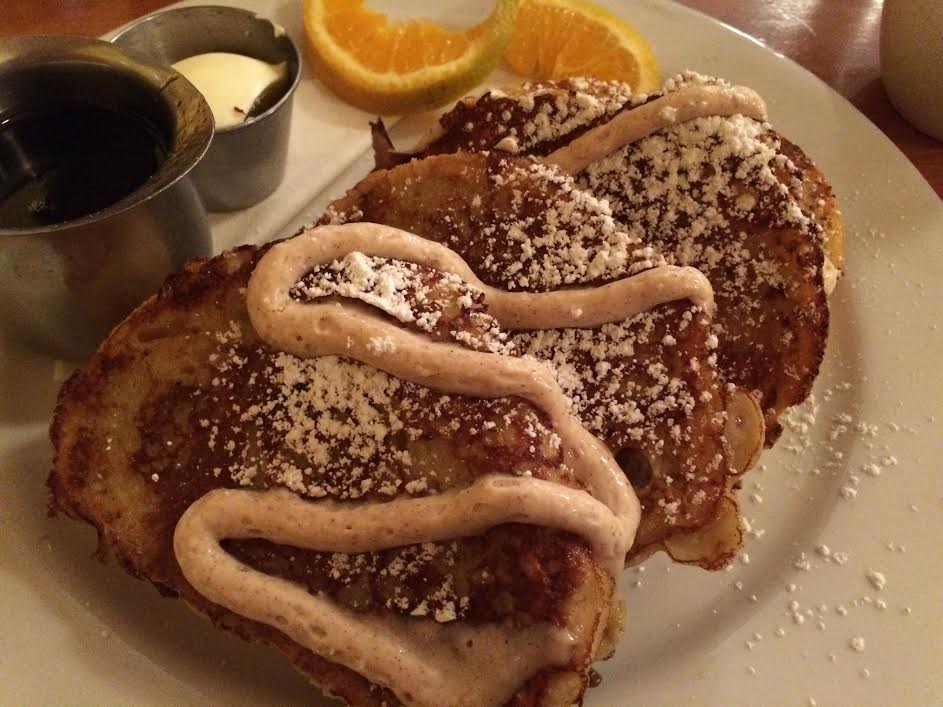 We went to Sckavone’s for breakfast because there’s rarely a line. They give you freshly baked lemon scones drizzled with lavender honey (so good). I got the French toast. It came drizzled with cinnamon cream cheese frosting, which tasted good but I didn’t want so I scraped it off.

Breakfast over, we picked Bella up and went to the vet. 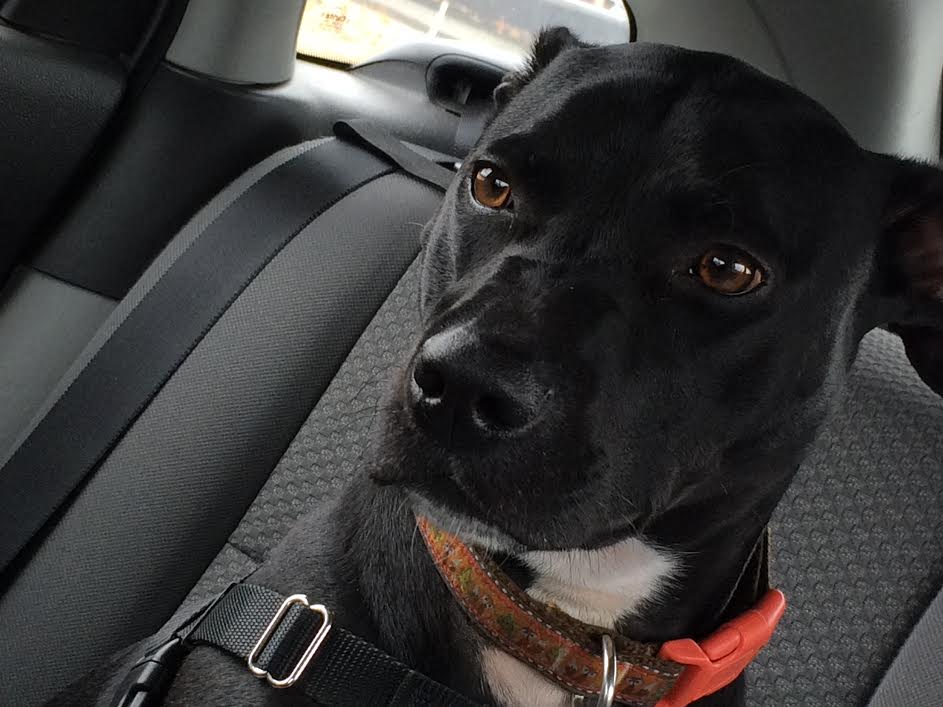 Thankfully the wait wasn’t long at all and the exam went well. The vet thinks Bella is fine, but we have to keep an eye on her just in case. Her stomach felt good and she did a rectal exam (I actually said to the dog “see Bella? This is what happens when you eat something you shouldn’t! Remember this moment.” Yes I had a conversation with my dog.)

Vet wasn’t too concerned unless she stopped doing her business, stopped eating and continued to vomit. None of that has happened so hopefully this is over with. I bought her a new toy that dispenses treats, so we’ll see if that keeps her occupied and stops the chewing.

Back home, the power was still off. I’d missed yoga. So I did my own yoga routine (about 30 minutes) and about 30 minutes on the elliptical at the gym and then back home. (Pain in my butt was still there and it was annoying.) Still no power. Shower in the dark.

The rest of the day was spent stressing about the food in the fridge and freezer, obsessively checking the PGE website and calling for updates. Since there wasn’t much we could do we spent the afternoon cleaning out closets and trying to get rid of stuff. We have about 5 bags of stuff to donate and about 5 bags of stuff to sell. So I guess that’s the bright side?

Dinner time comes and still no power. We ended up at Reverend’s because I was craving BBQ. Dinner was fantastic and so much better than the last time we went. We got some happy hour hush puppies that were AMAZING. Stuffed with corn and chunks of savory ham. Spicy dipping sauce. So good! 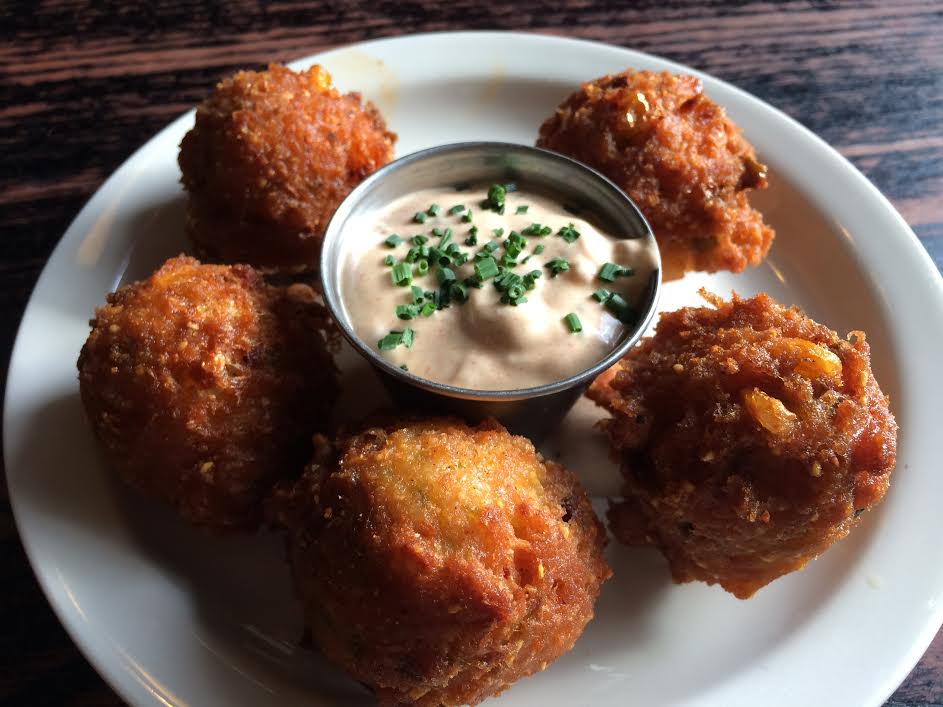 We both got the brisket plate. I got the collard greens and mac n’ cheese on the side. The mac n’ cheese was topped with crushed BBQ potato chips. Which sounds gross but was kind of amazing. LOL 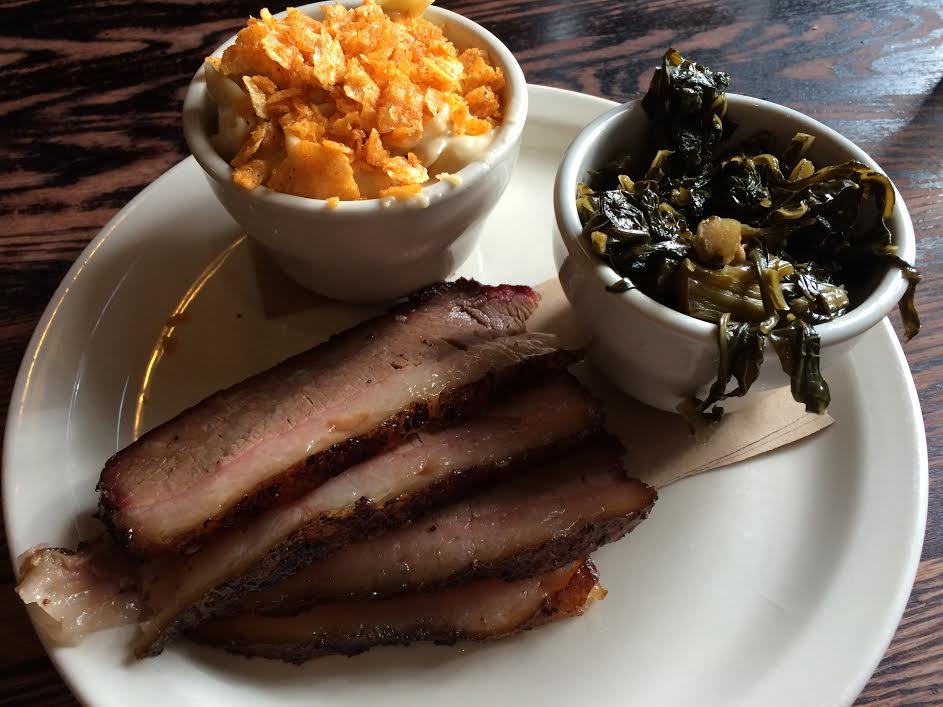 Dinner was so great. It ALMOST made up for the crappy ass weekend. Almost. But not quite. I ended up eating way too much because we couldn’t take leftovers home…

Then we spent the next hour or so driving to four different grocery stores to find dry ice. At the very least we wanted to try to save the stuff in our freezers (we have two). The stuff in the fridge was already done for. 🙁

Our power finally came on at 1:30 in the morning. Too little too late. The entire fridge (both of them) went in the garbage. Of course I’d just gone grocery shopping on Saturday and Michael had just gone to Costco the week before. OF COURSE. 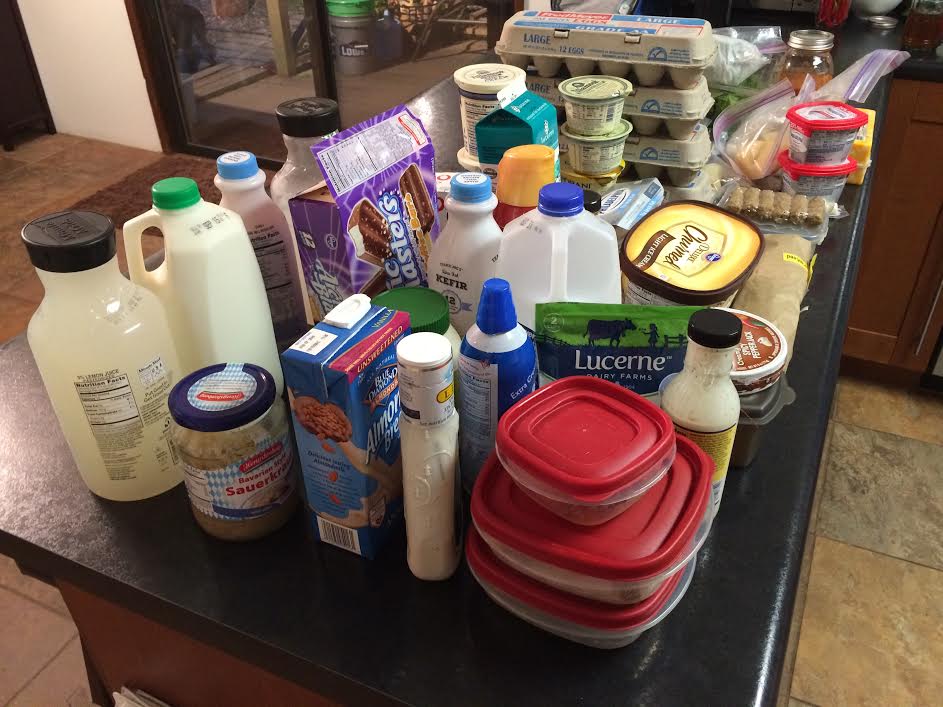 Trying to have perspective but I’m in a bad mood. If you can’t tell, I am really really grumpy. 🙁