On Memorial Day, Michael and I went to Broder for breakfast. It’s a place I’ve wanted to go to breakfast forever but haven’t tried it because every single time I drive by it, there is a line around the block. I’m just not the type to stand in long lines for restaurants. Broder is a Swedish restaurant that is very popular! The place we planned to go to originally was closed for the holiday so we drove by Broder just to see how bad the line was. I was surprised that there were only about 15 people waiting. The restaurant was going to open in about 10 minutes. Perfect timing!

We got a table. (The place was completely packed and when we left, there were tons of people sitting on the benches outside waiting.) Michael got an iced tea and I got coffee. It came with a little jug of cream–the thickest cream I’ve ever had. The coffee was pretty good but a little on the sweet side for me. 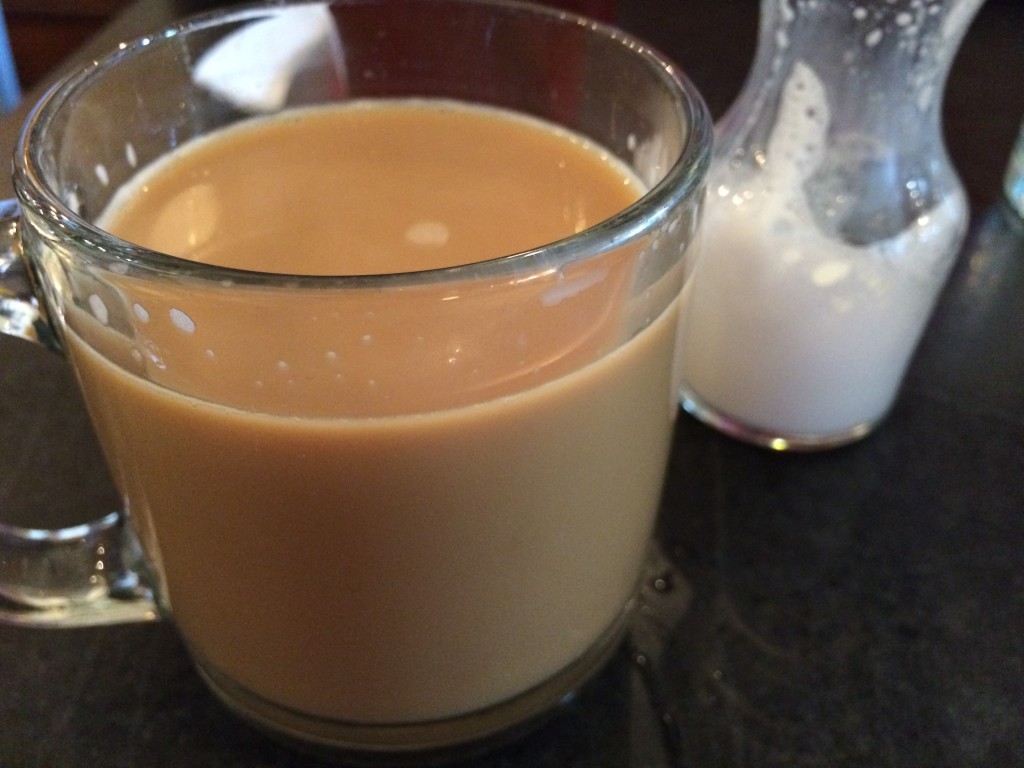 Michael got the hash. It was potatoes, diced ham, roast beef topped with baked eggs and pickled beats. There was a side of walnut toast. Michael loved his dish. He said it was very unique. I had a bite and it was quite good. I also liked the walnut bread. It was so interesting and different! There was a smoky flavor in addition to the nutty flavor. 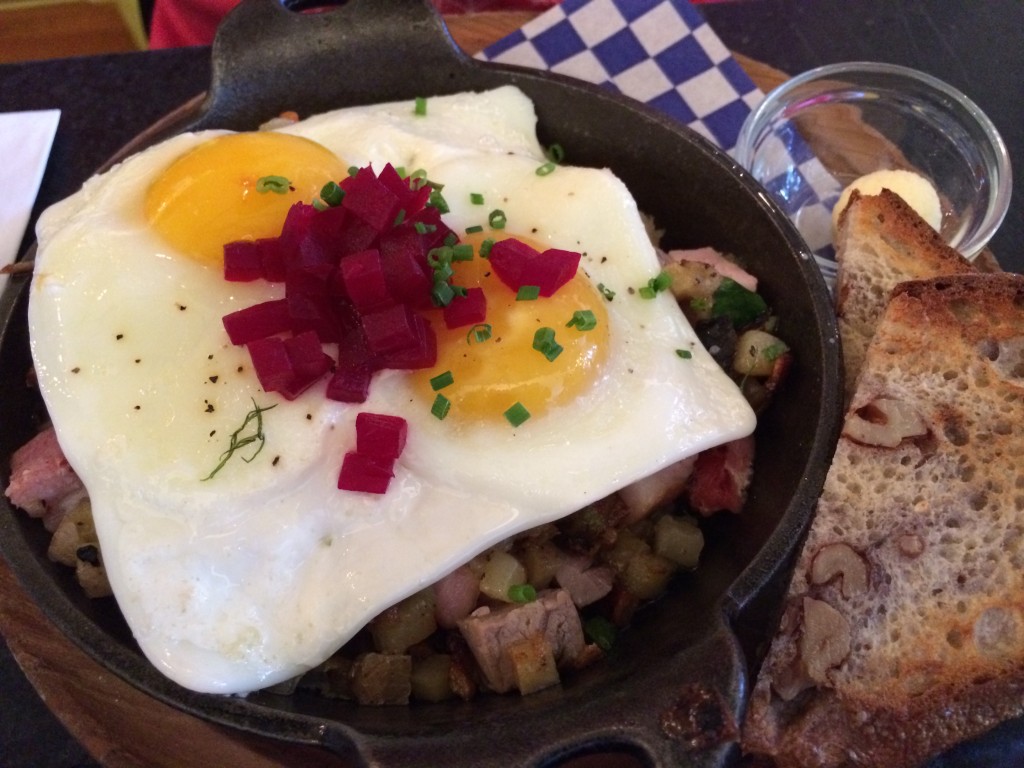 I went with the Ableskiver (Danish Pancakes). It was something I’d heard about for awhile and wanted to give it a try. I was not disappointed! The presentation of both dishes was fantastic and everything tasted great. My “pancakes” were airy and light and didn’t sit too heavy. They kind of look like donut holes.

It came with a side of lingonberry jam and lemon curd. The pancakes were light and had a lemon flavor to them, even before dipping in the lemon curd. The powdered sugar on top was a nice tough. What a cool breakfast! While I would not return if it meant I was standing in line for along time, I would happily go back to eat there. Perhaps going at “off” times means the lines aren’t as long. They also serve lunch and the lunch menu sounded delicious!

After breakfast we returned home and I went for a run. It was such a nice, sunny, warm day out and I didn’t really want to go to the gym. We’d gone for a hike the day before and while my hamstrings were a little tight, my knees and quads felt good so I figured a run would be ok. I used my Couch to 5k app and walked down the street to the school nearby. 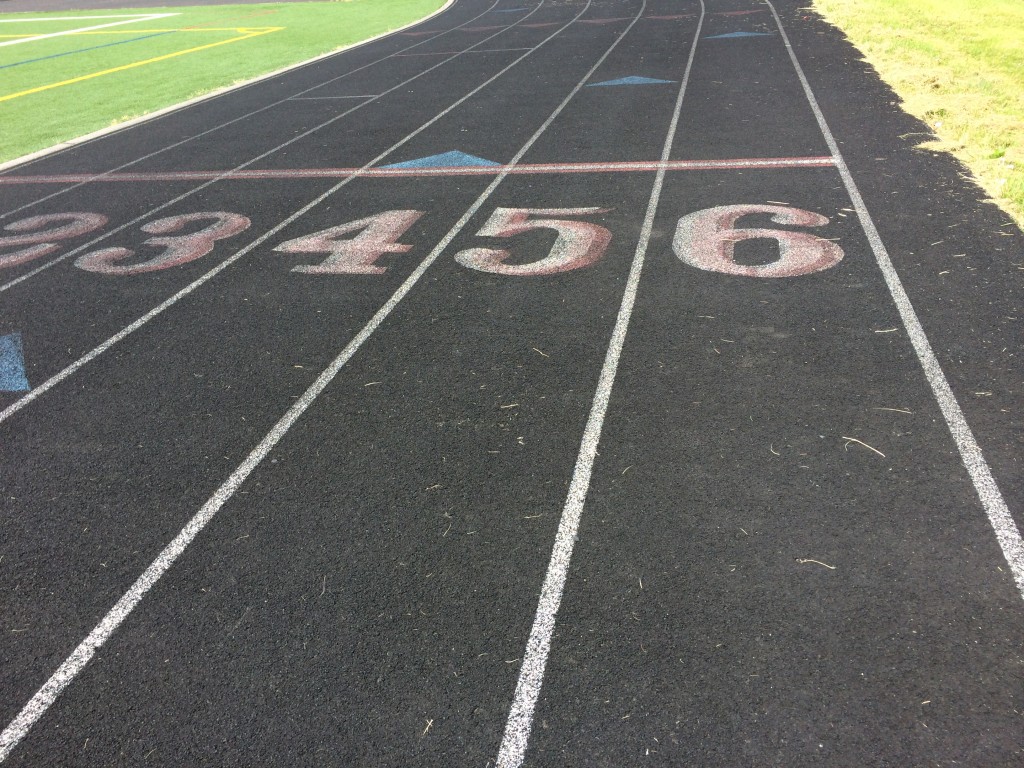 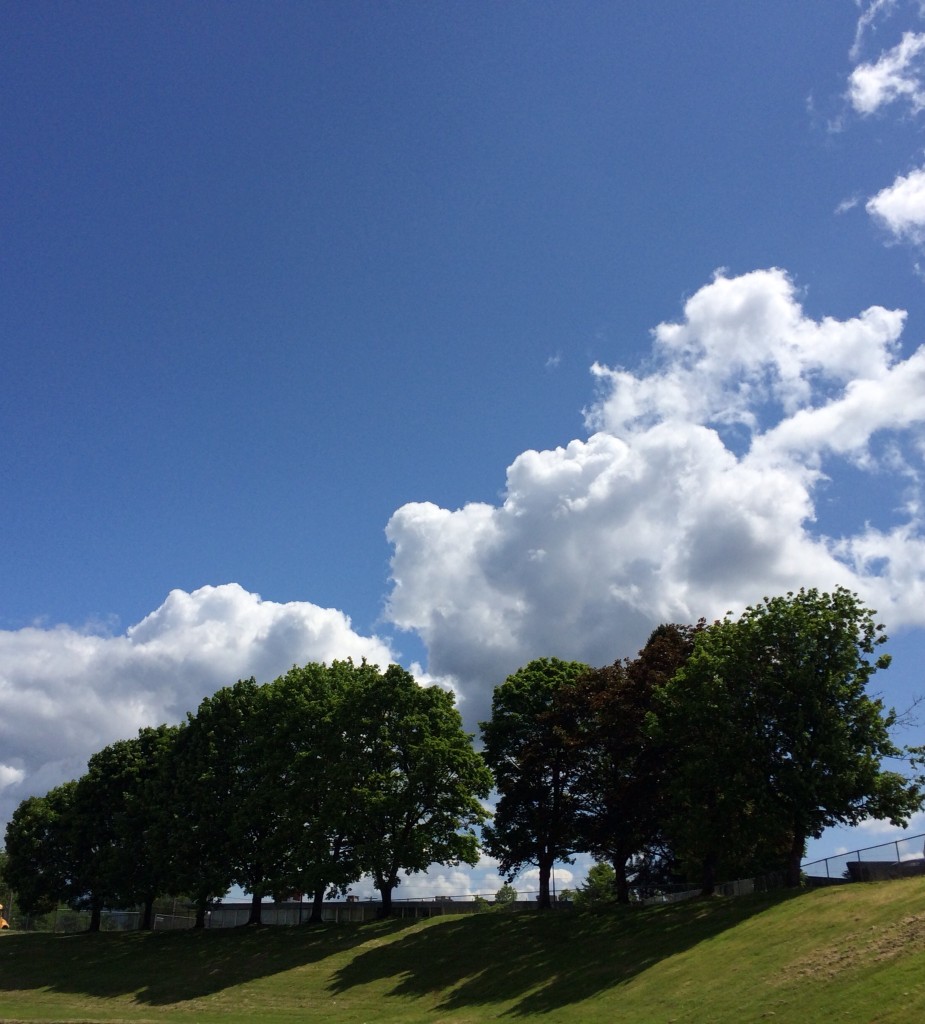 I really like running on the track and it’s nice that it’s so close. I know track running can be monotonous but it’s a million times better than a treadmill. At least I’m outside and I can feel the sun on my shoulders and the wind in my hair! My legs were a little heavy as I started the workout but they loosened up a bit and the run was decent. 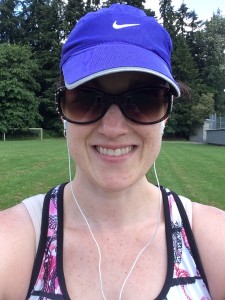 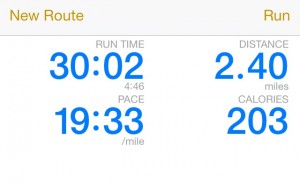 I ran 2.40 miles in about a half an hour and then used the walk back to the house as my cool-down. I was feeling really great! Michael and I spent the next few hours working in the yard. This was the calorie burn for my run: 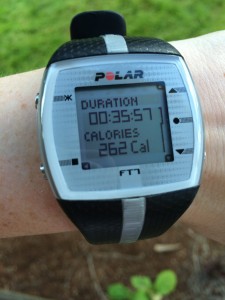 Really, we’d been working on the yard all weekend long, but still had so much more to do. We split it up between the three days because there was just so much of it. On Saturday I’d lifted weights at the gym, then cleaned the whole house, did all the laundry and moved a bunch of heavy furniture. Then we’d spent a few hours weeding and I planted tomatoes. Lots and lots of heavy lifting. You better believe my back was sore. I took it a little easy on Sunday but Monday came around and we had to finish the rest of it. More weed pulling, more chopping down blackberries, and then planting 18 jalapeno plants! 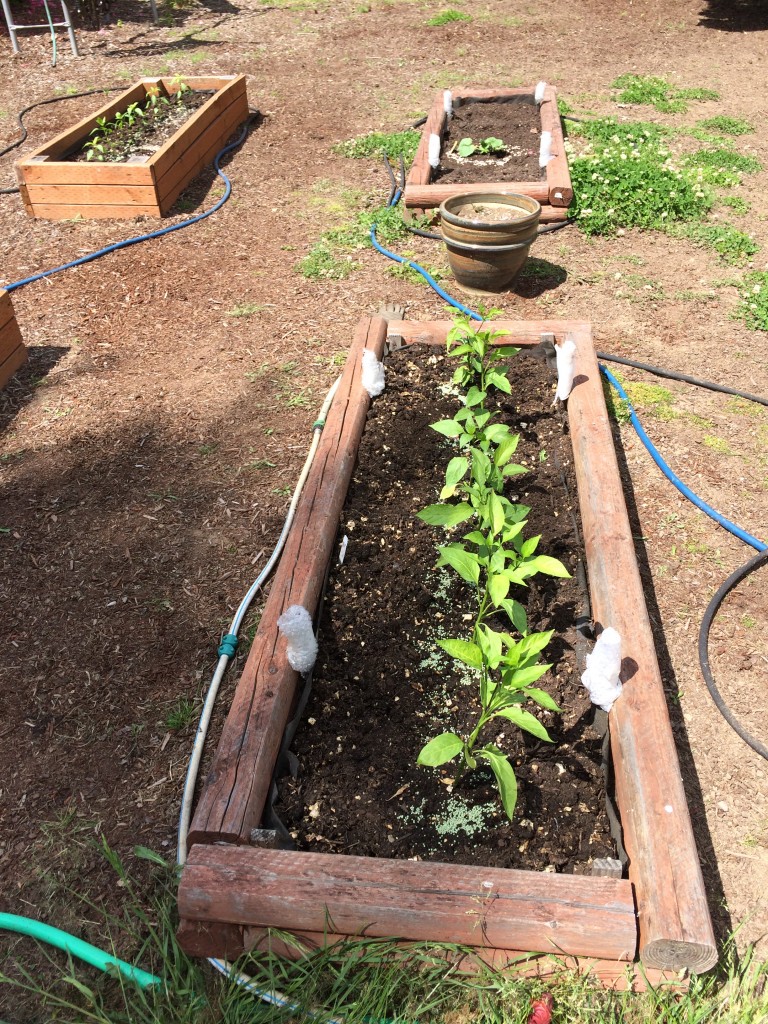 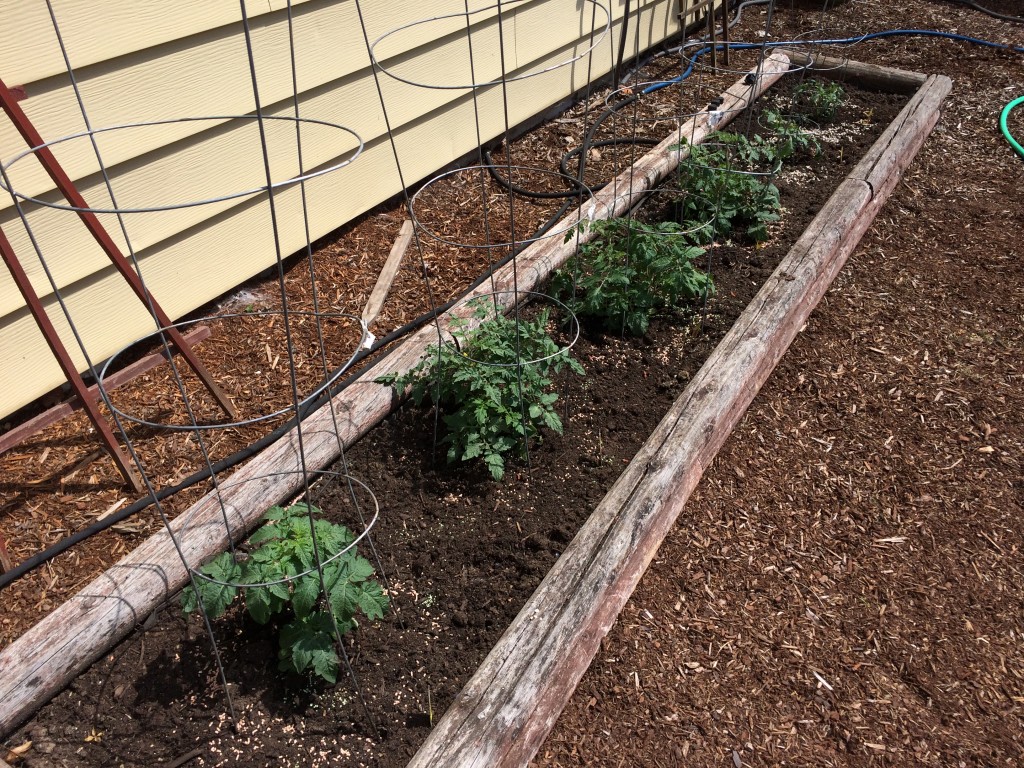 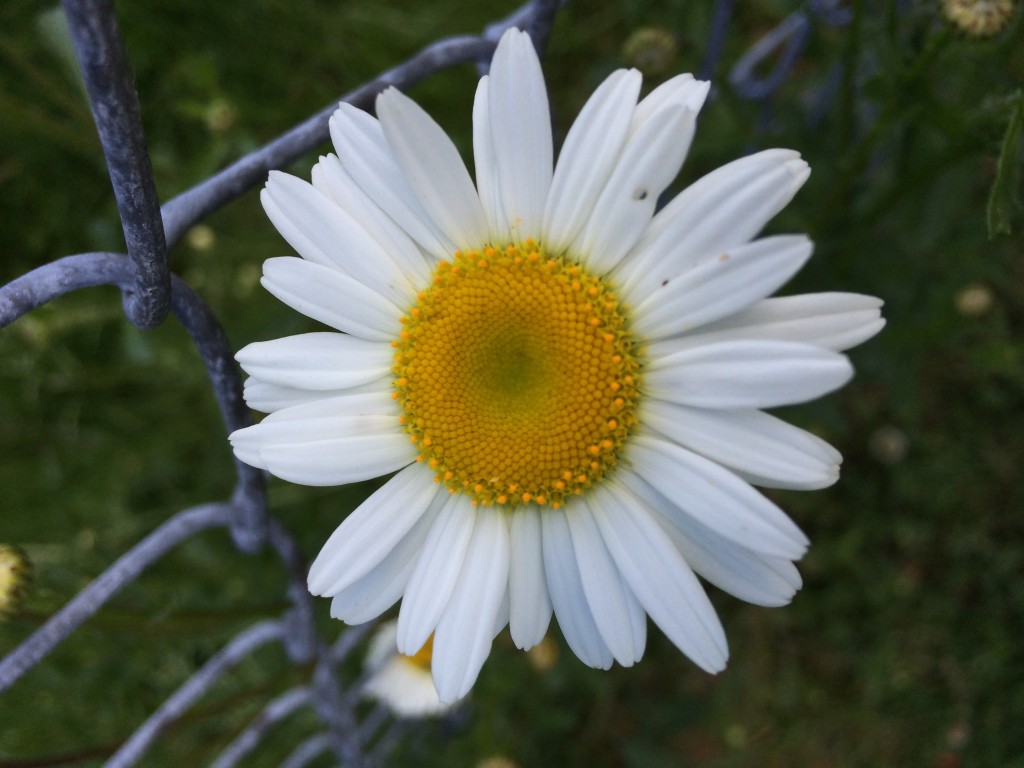 I’m a little bummed we aren’t doing kale this year. There’s just too much to do with the wedding and stuff and we almost skipped a veggie garden entirely. My hope is that they all ripen BEFORE we leave for two weeks on our honeymoon! Cross your fingers we’ll be lucky with our plants this year. Last year wasn’t that great. I think our compost soil wasn’t ready for the plants.

Michael and I wrapped up the long weekend with a movie. We haven’t gone to a movie since we got Bella! That’s a long time for us. We used to go to movies a few times a month at least. I guess our priorities shifted. We didn’t want to leave Bella in her crate any longer than need be; we already feel guilty enough leaving her while we are at work. Anyway, we went to see Godzilla. There were a few ridiculous moments in the movie but overall it was quite good and exciting! So the long weekend ended with a good movie and an unfortunate sunburn…. 🙁 The first of the season ALWAYS gets me.