Saturday morning I woke up bright and early (aka 8:30am) and made a breakfast of scrambled eggs with spicy pork sausage and fried polenta with a lot of spicy sauce. It was really good and only around 400 calories. Plus coffee. It was a nice day out and we planned on going for a hike. I’m slightly disturbed by the abnormally nice weather here in Portland. Usually the rain starts in February and goes through June. I really hope this doesn’t mean we won’t get a summer….Anyways, here was breakfast: 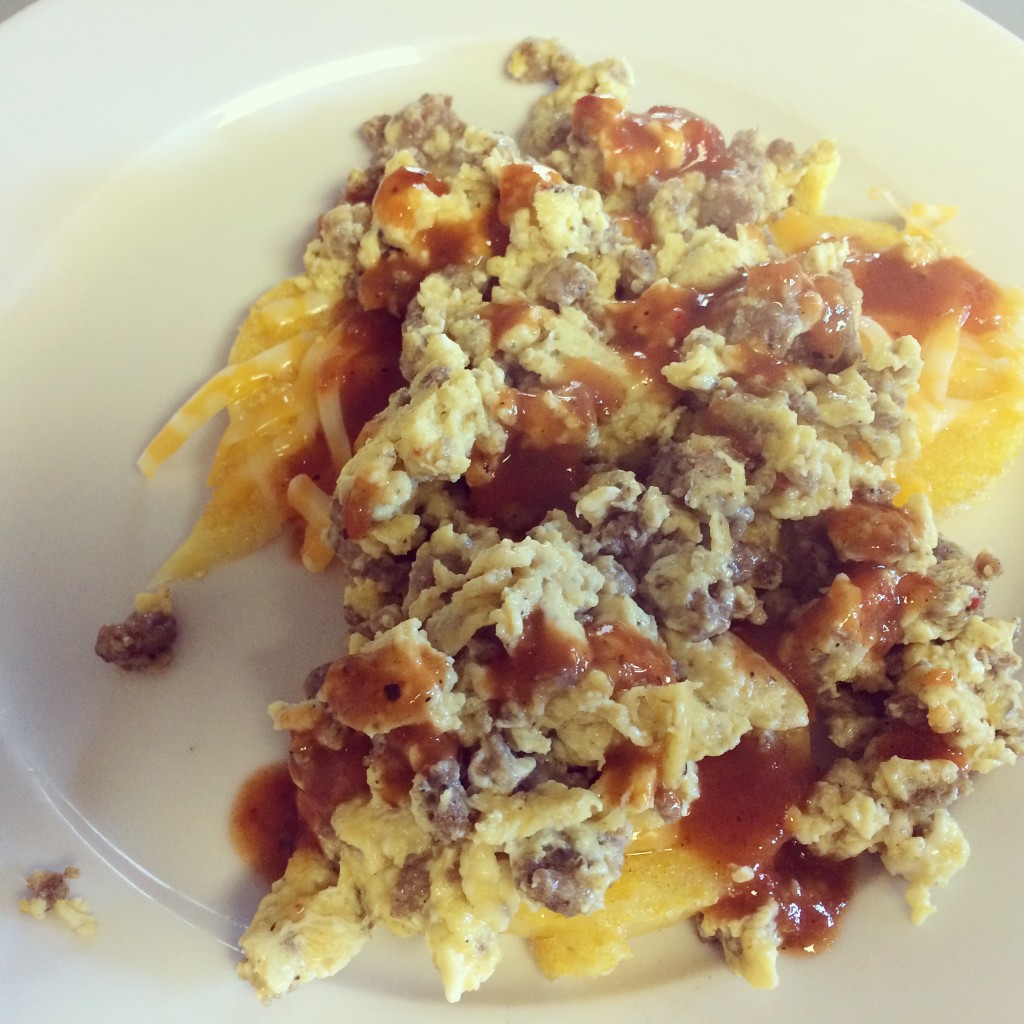 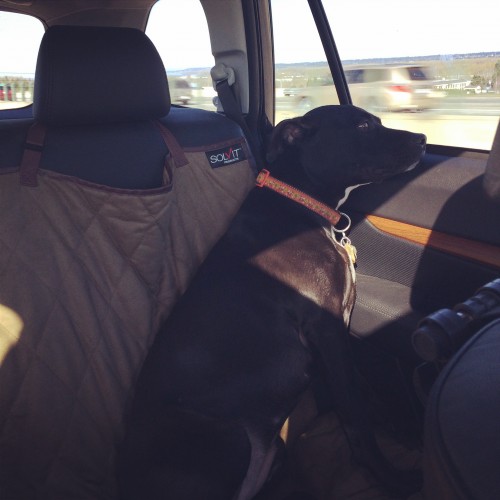 Bella gets SUPER EXCITED when she realizes we are going for a hike. We start getting the gear together and she starts spazzing out, whimpering, jumping, whining, running between the rooms where Michael and I are in. Total spaz. We made a stop at Subway to get lunch to go and then hit the road for a day hike in the Gorge! It was a gorgeous, warm-ish day (55 degrees) but a little on the windy side. We drove about 45 minutes east towards the Bridge of the Gods and decided to hike Dry Creek Falls. We’ve done it a few times but this time was the longest distance we did on this hike. 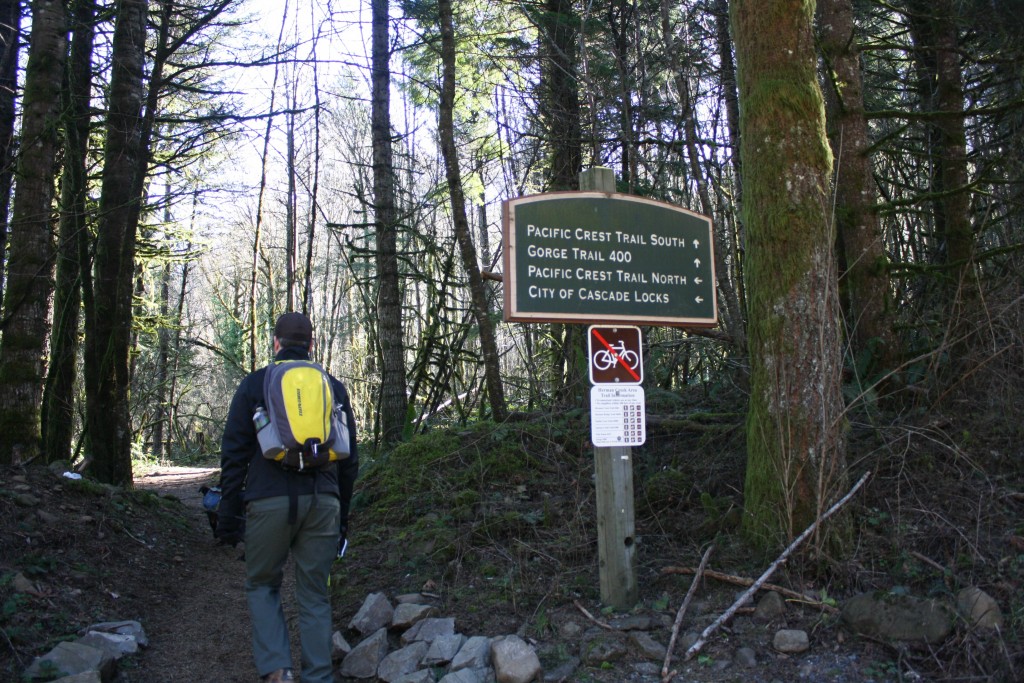 I like this trail a lot because it’s rarely ever crowded. It’s a good workout without being too brutally hard you’re miserable and it’s through old growth forest that shields the bitter cold winds of the Gorge. The parking lot right by the Bridge of the Gods is a pay lot, but if you drive one block away and drive through the neighborhood there’s parking under the bridge for free right by the trailhead. FYI. 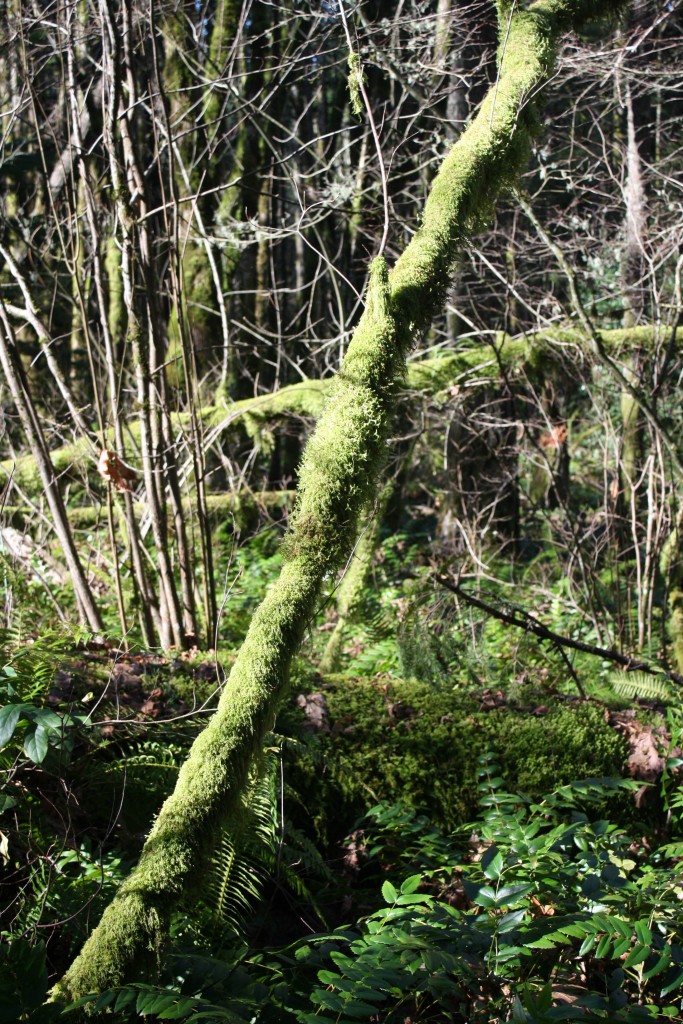 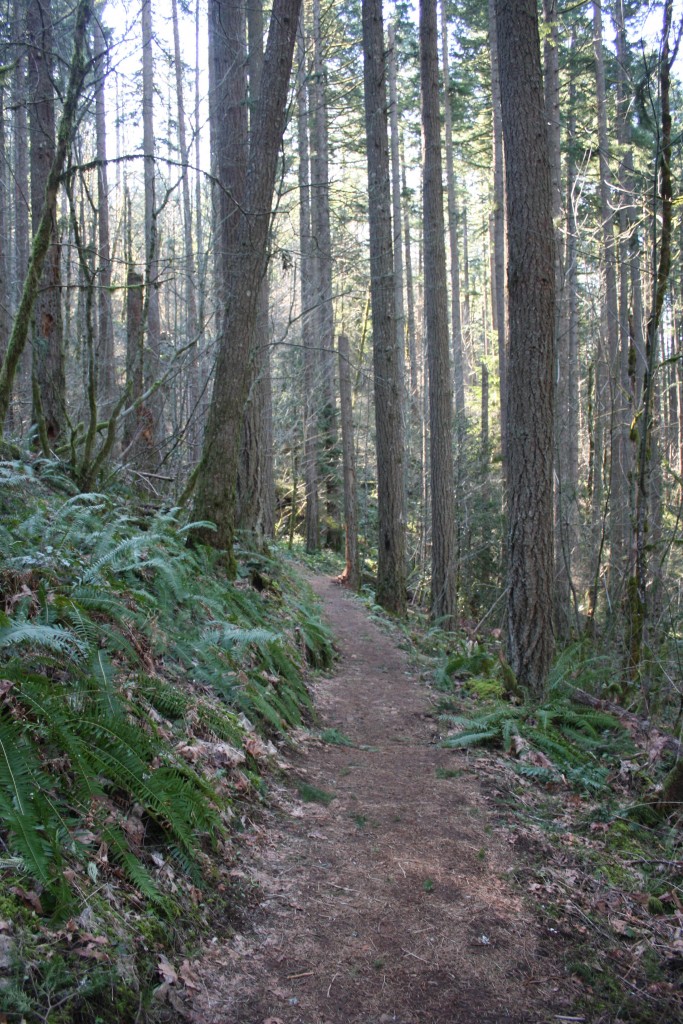 We walked on the soft ground padded with pine needles and moss and the trail snaked through the thick trees that made the forest seem dark. There were breaks in the trees where we got to enjoy some of the sunshine. It was warm enough that a jacket wasn’t needed. I had a moisture-wicking t-shirt and a sweater on and that was good.  We came across a few different groups of hikers and everyone was really nice, plus all the people with dogs off leash put them on a leash when they saw us! What a nice change. Also, Bella did SUPER great on the hike. No barking at strangers or dogs, she just seemed a little excited and curious.

We got to a fork in the trail where the falls are and a bridge. This is as far as we’d ever gone on this hike. We skipped the Falls this time because I remember it being kind of small and anticlimactic. Instead, we decided to cross the bridge and go further up the trail. 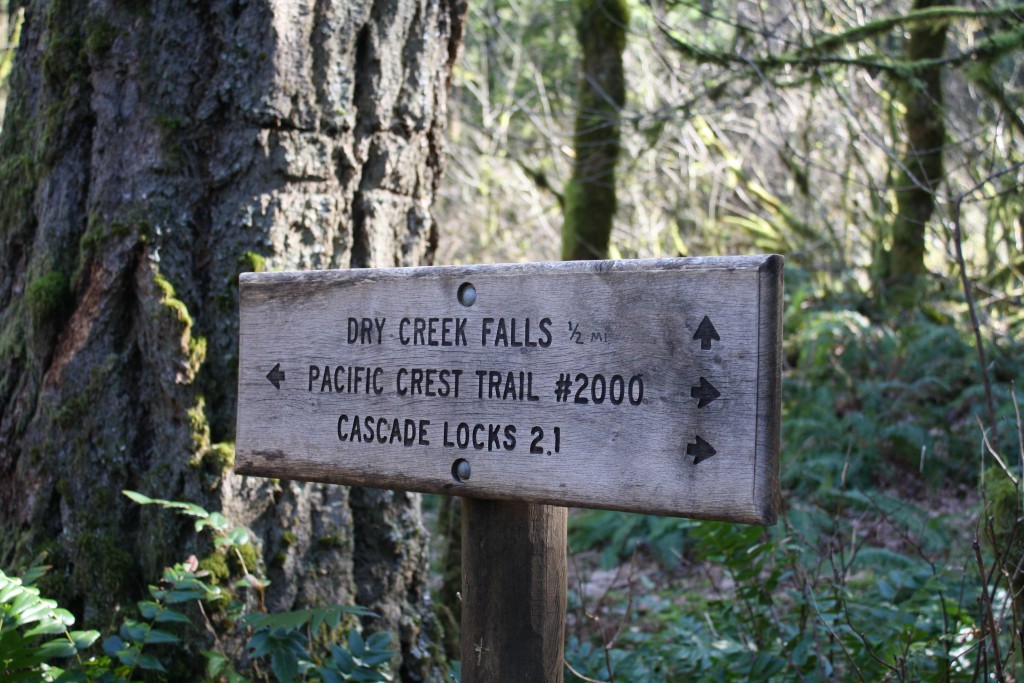 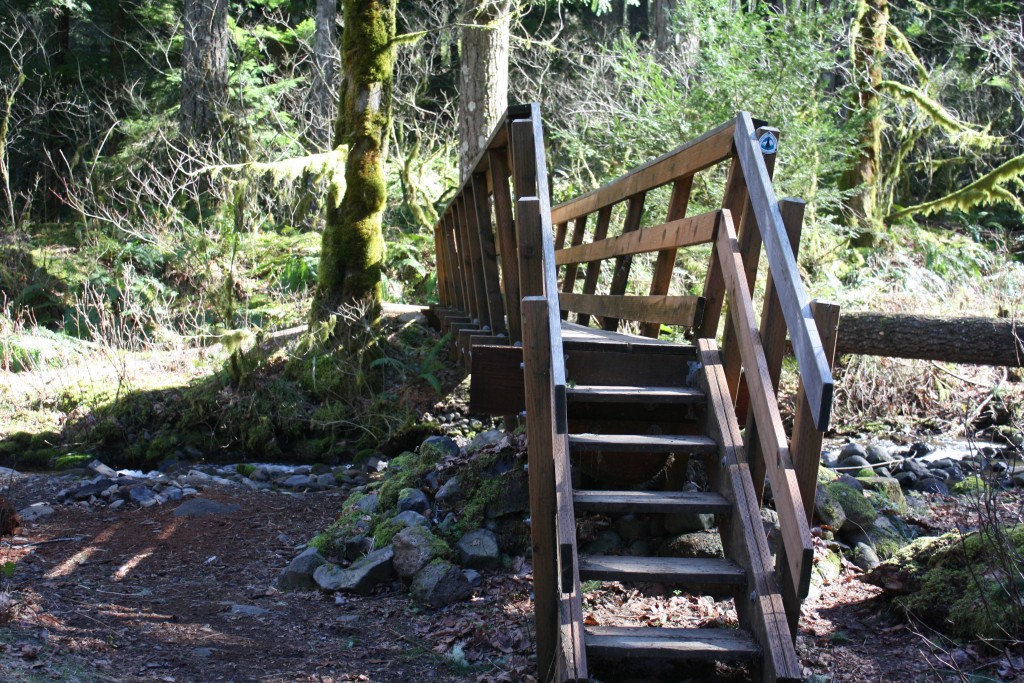 Bella tends to be afraid of bridges. She panics and refuses to cross the bridge. I went first and we walked single-line across the short and narrow bridge. She was a little freaked out but made it across ok! It’s so funny what she’s afraid of. Bridges. Vaccuums. The mop…Silly pup. 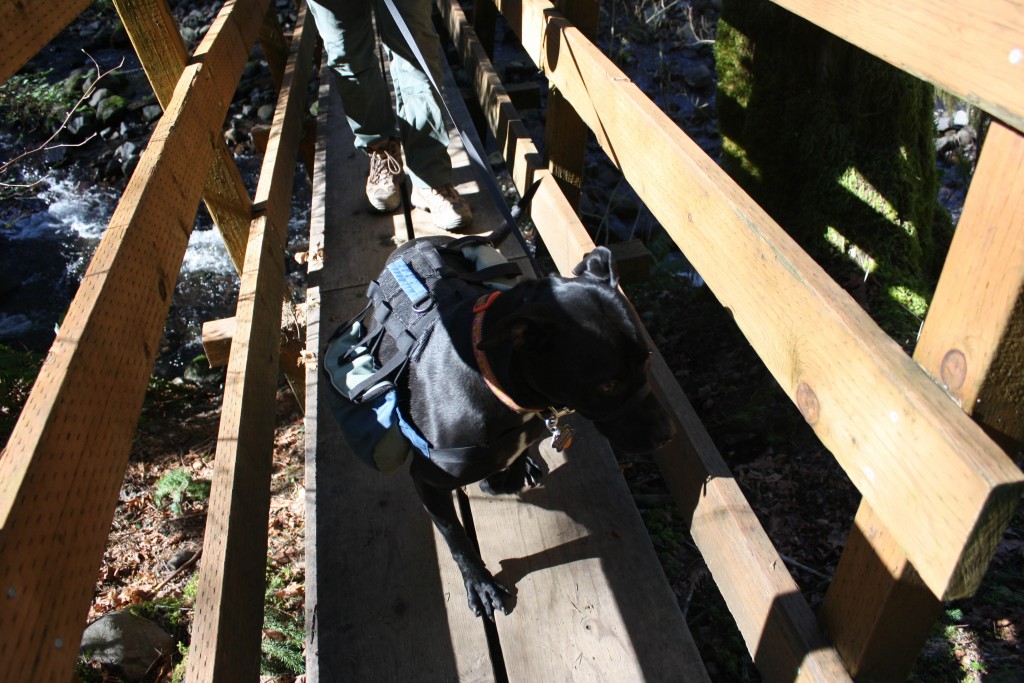 We got across the bridge and stopped for lunch. We shared a Subway sandwich and drank some water in the sunshine and hung out next to the creek and bridge. It was a nice view for lunch. We’d hiked about 45 minutes so far at this point. 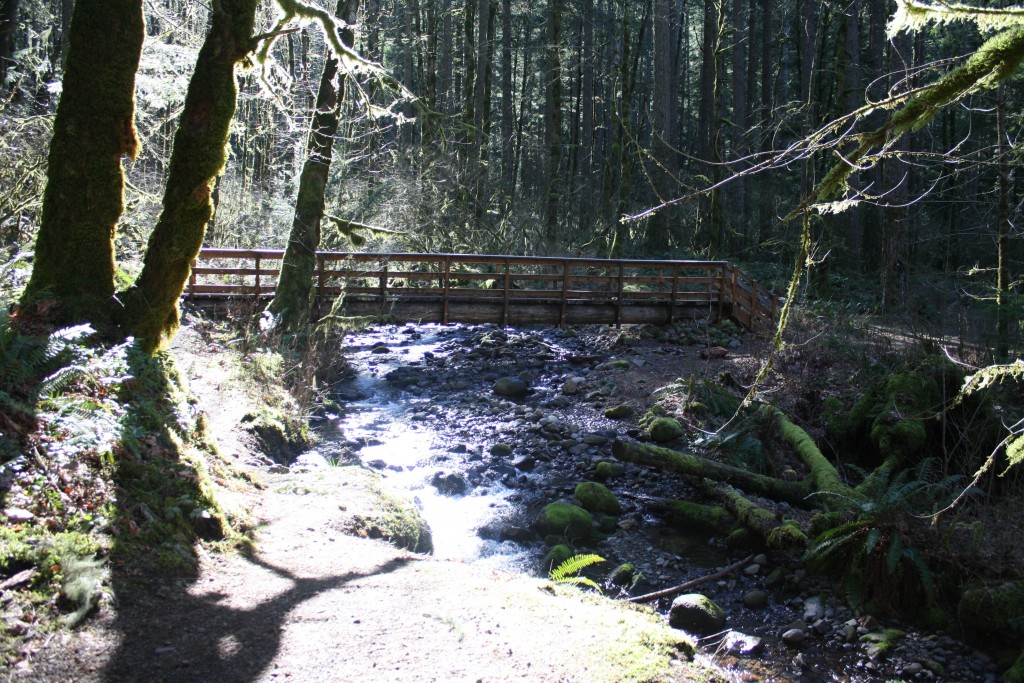 After lunch we continued up the trail. It was quiet and dim, no one else on this part of the trail. We hiked through the forest and the trail was pretty level at this point. The first part of the trail is strenuous and gets your heart pounding but this part was pretty easy. Bella stopped to sniff every single fern in the forest and we passed by acres of moss covered trees and mushrooms and furry forest creatures, which thankfully Bella wasn’t too interested in. 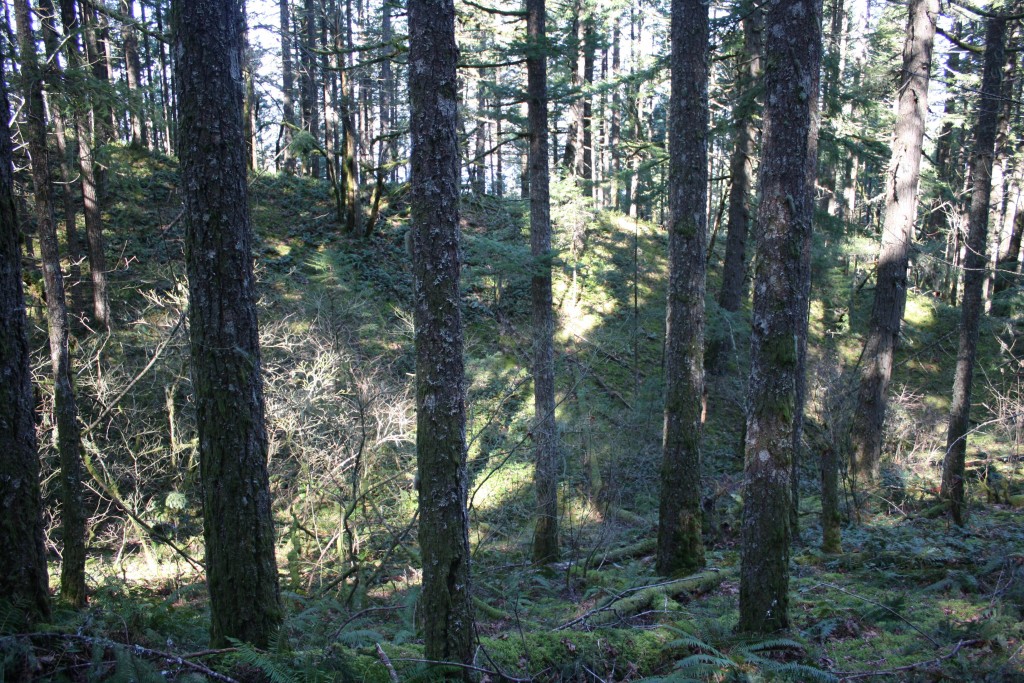 We hiked for awhile and then came to a clearing and a boulder field. The trail was beginning to get a bit rocky here and I stumbled a lot. I think I was starting to get tired and even though we’d eaten lunch mid-hike, I don’t think I fueled properly for the amount of hiking we did. I was starting to feel like I was close to hitting the wall. My body felt okay at this point but I was tired. 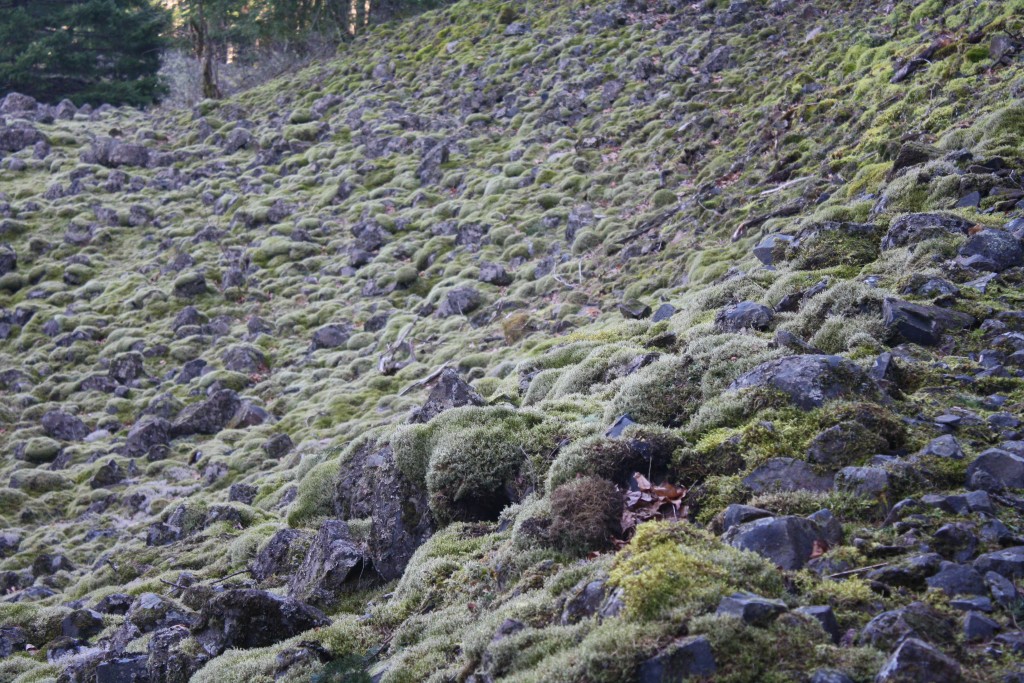 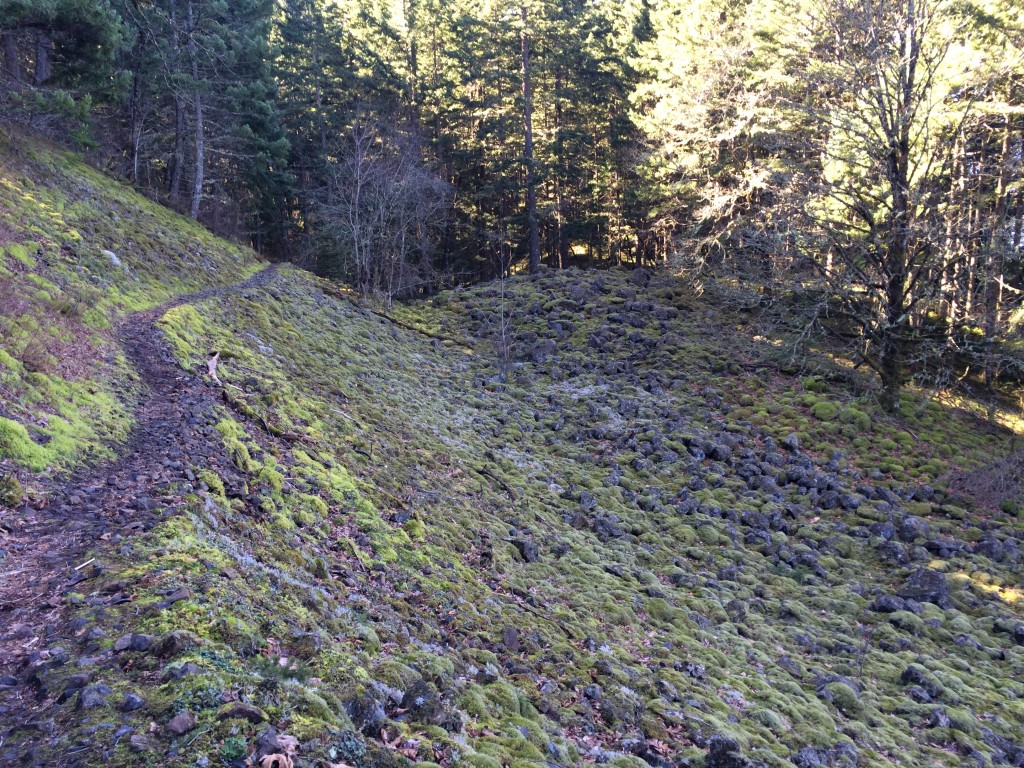 There was a bit of a view of the river, Washington state, trees and sunshine from the top of the boulder field.

We stopped along the narrow trail to let some other people pass by on the trail before we continued on. Bella was doing ok but I was a little worried about her footing on the boulder field. The trail was ok but the rocks were pretty big. *I* was struggling with it! 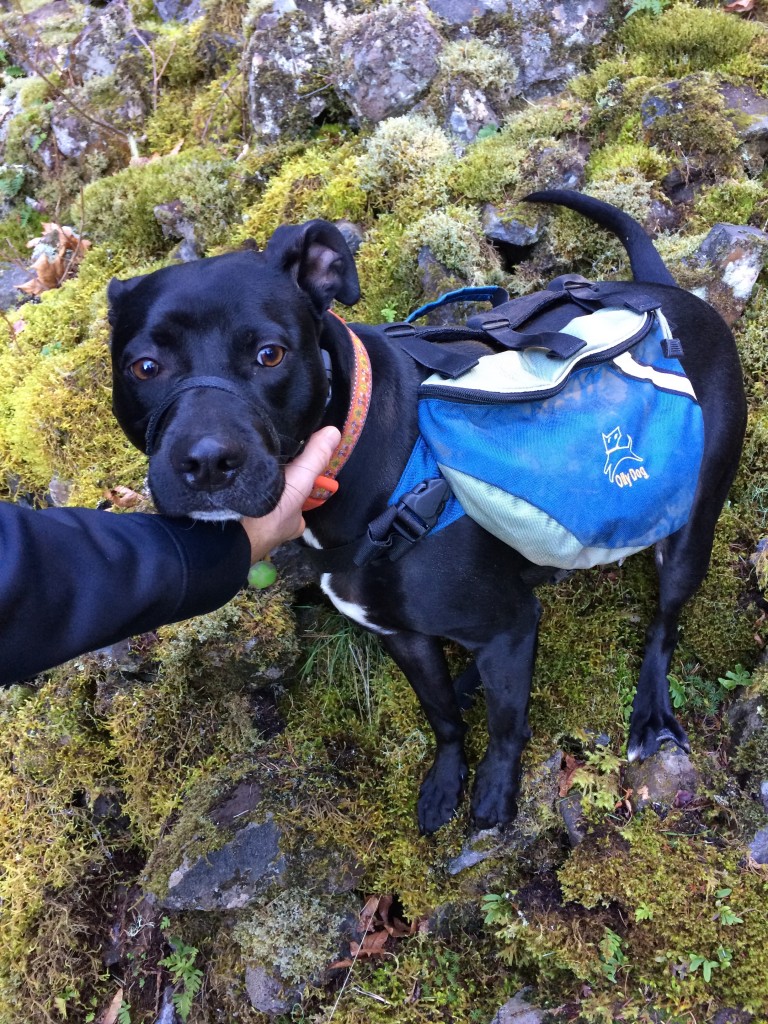 The boulder field was still cool.  We kept hiking up the trail and it was going deeper into the forest. Michael joked that we were almost to Canada. It was part of the Pacific Crest Trail, which goes from Canada to Mexico, so in theory we COULD have kept going…But I was definitely getting tired and was ready to turn around. 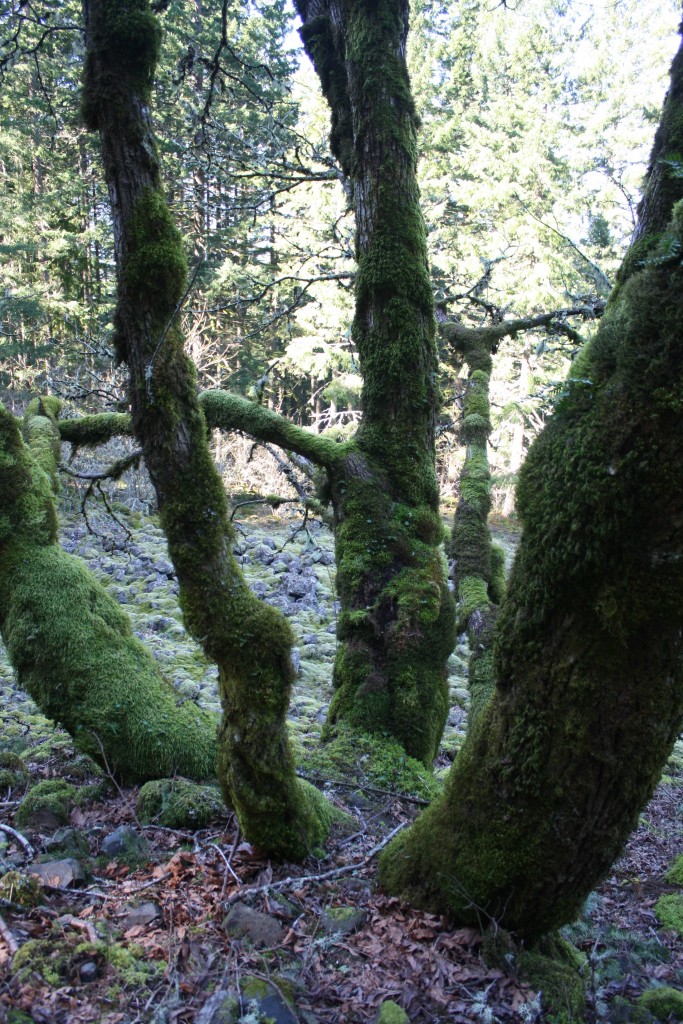 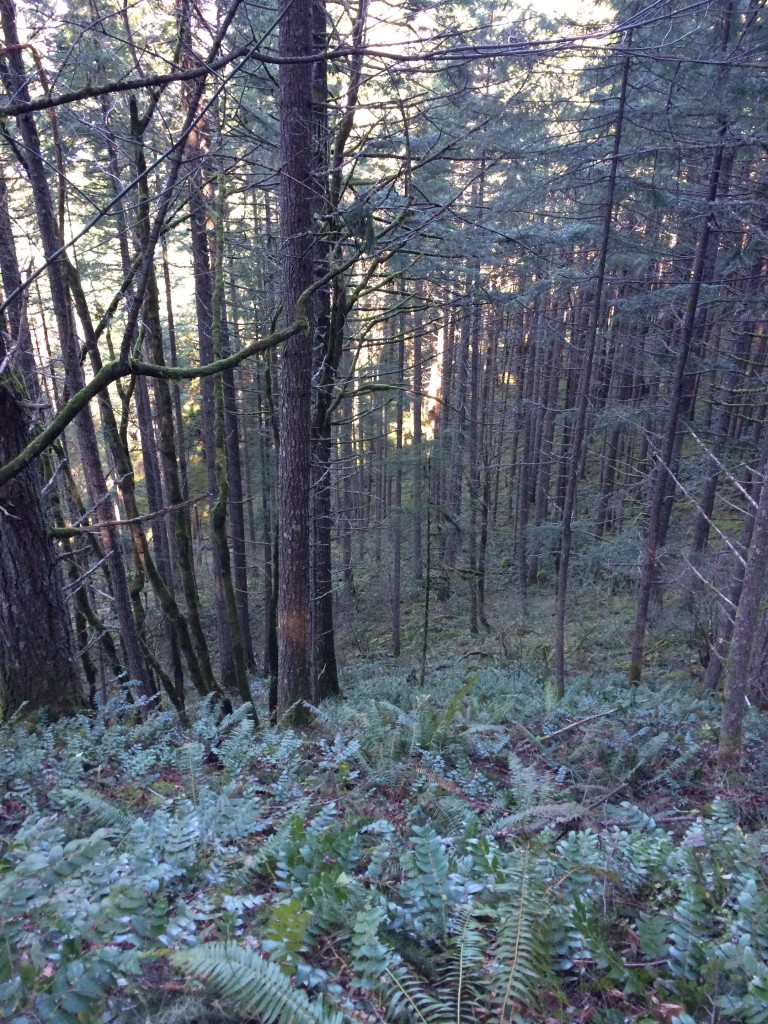 It was such a pretty day and a nice hike but it was definitely time to turn around. In fact, we probably should have turned around about a mile before here. I was feeling lethargic and while my body felt ok (knees, etc), I was stumbling on the rocks on the trail. It was difficult in places to get the right footing and when I start stumbling I know I’m getting tired. I had some water and we continued on. 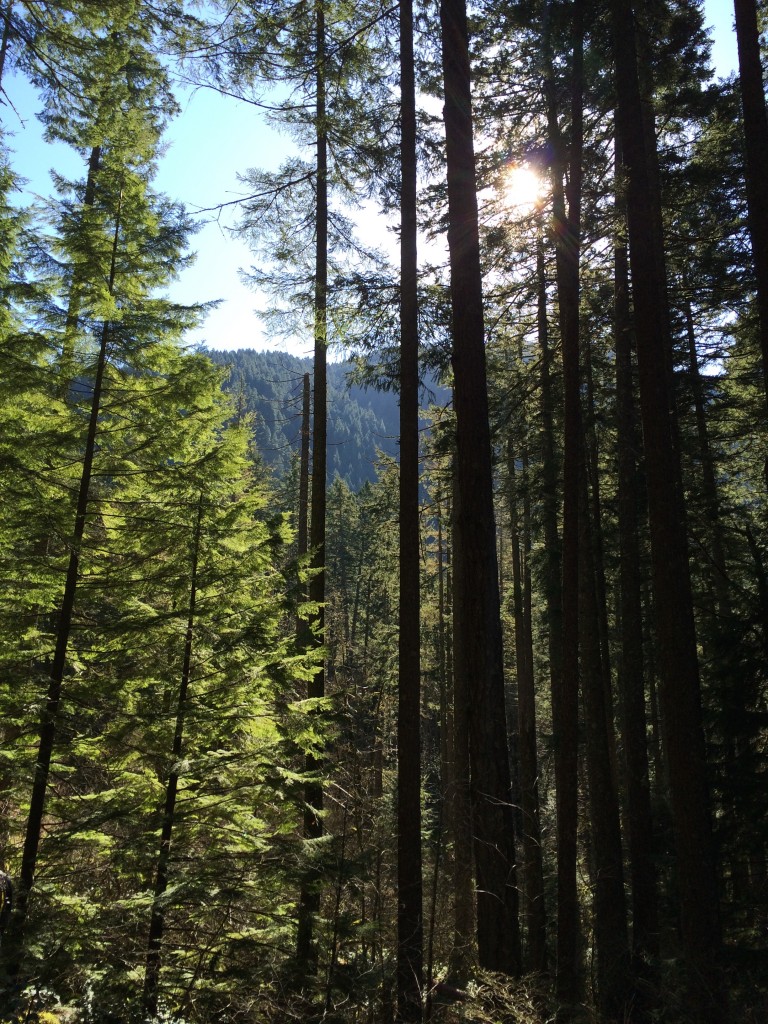 While there aren’t that many viewpoints, it really is a pretty hike. We trekked down the trail and then got to the bridge. Bella crossed it like a champ, no fear this time, and we continued down the trail. Thankfully it was mostly downhill. 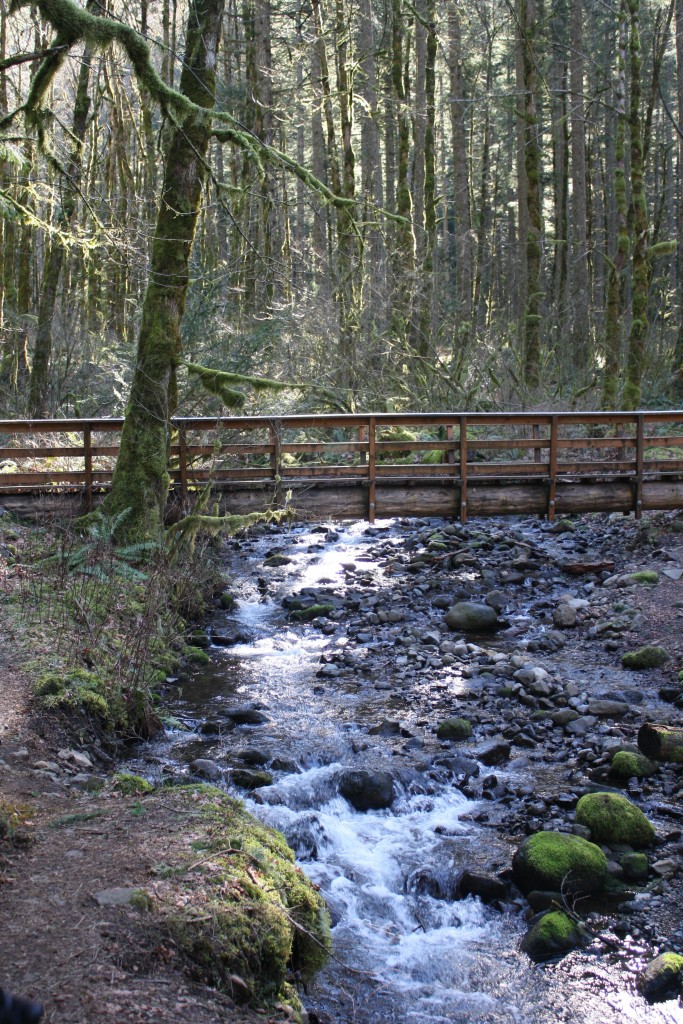 We FINALLY got back to the car.  The last 3/4 miles were hard for me. My knees were starting to feel sore and I was really, really tired. Bella was doing okay, though, so that was good. 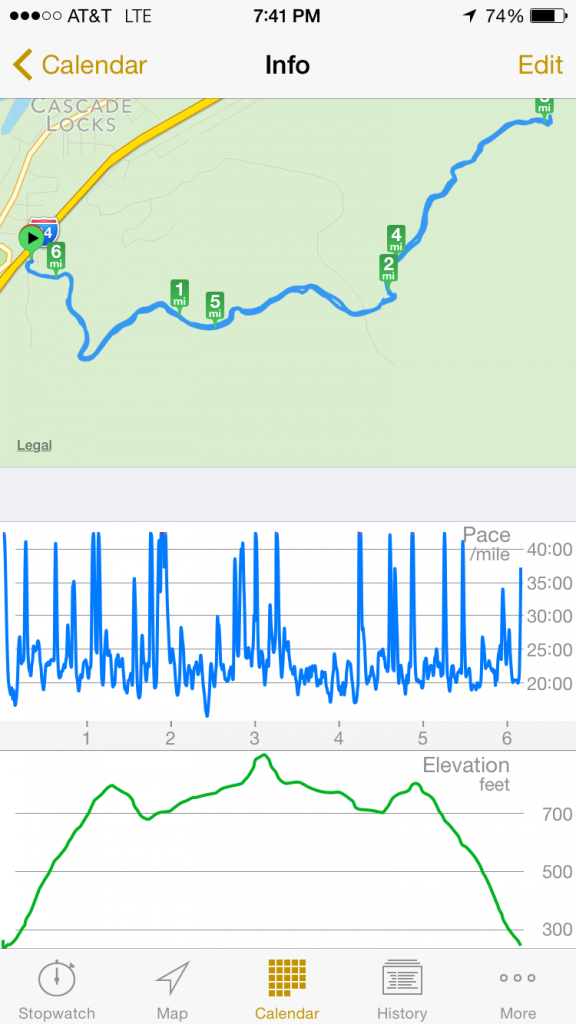 We got back to the car and Michael checked our mileage. We did 6.16 miles! That was the longest hike we’ve done in a long time! It was roughly 1 mile longer than I would have wanted, but despite the fatigue, I enjoyed the day. Here are my calories: 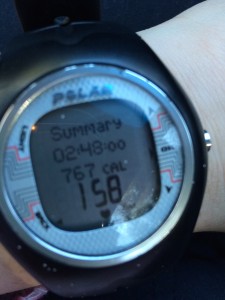 767 Calories burned! Bella fell asleep in the car immediately. I would have fallen asleep had Michael not poked me periodically to keep me awake. 😛 We got home, I gave Bella a bath, I also took a bath with epsom salts to try and relax my cranky knees and shins, and then Michael got started on dinner. Dinner was BBQ ribs and Brussels Sprouts. YUM! It might have been the best ribs Michael has done to date and I LOVE Brussels sprouts, so it was pretty much the perfect meal after a strenuous hike. 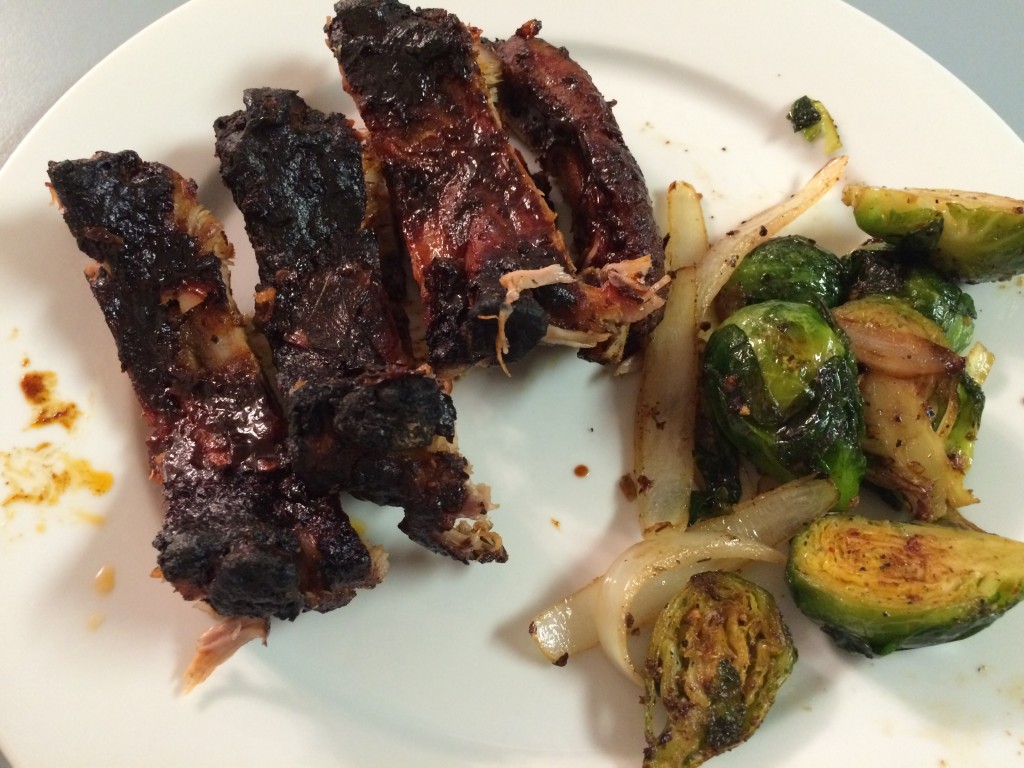 The hike was good. It was a really nice day and the weather was near perfect. Would have been even more perfect had it been shorts and t-shirt weather. I iced my grumpy knees Saturday night and relaxed with some episodes of Gilmore Girls. All in all it was a good day!