Did you had a good St. Patty’s Day? We had a pretty good day.

I’d been sick all week off and on, with what I thought was food poisoning (came home sick on Thursday) but it lasted too long to be food poisoning. I called the advice nurse and she said that there was a stomach bug going around. Lucky me! But by Saturday night I was feeling a lot better.

We decided to go out to an early dinner at Tabor Tavern on SE Burnside. I’d never been but Michael found some good reviews online and we were both craving burgers. And they said they were kid friendly! 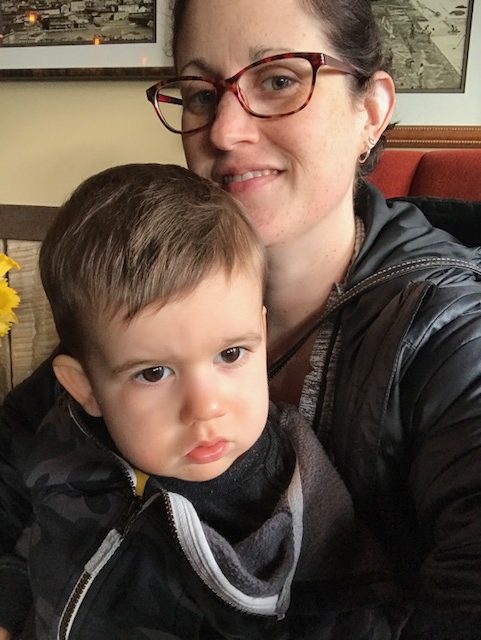 There were a ton of families with little kids there. That was a good sign! 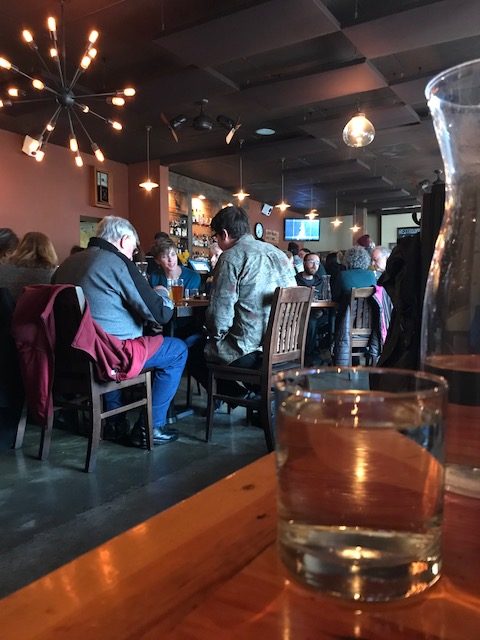 We arrived at 5:15 (PARTY ANIMALS) and the place was packed! We thought we were being smart by getting there early. Oh well. I guess other people had the same idea–avoid the St. Patty’s Day crowd! 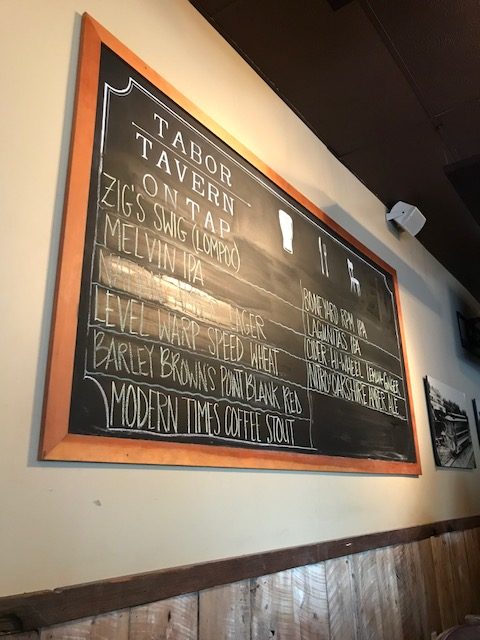 I was happy to see they have my favorite beer on tap! Always a good sign. And NO GREEN BEER!! 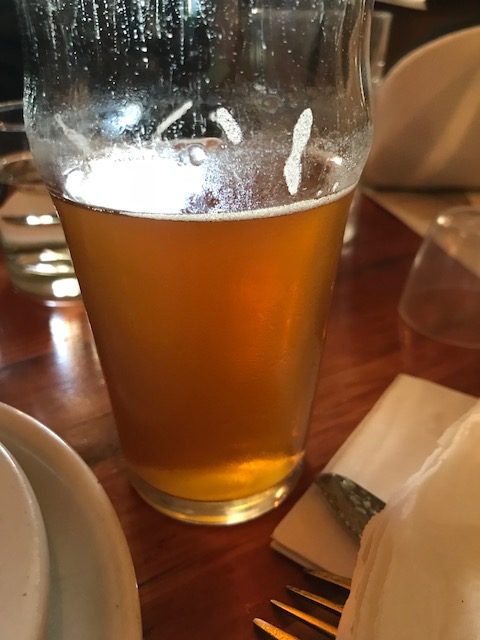 We got the Brussels Sprouts appetizer. It had bacon and lemon zest on it. It was delicious!! Logan had a few bites. He does not like Brussels sprouts but he loved the bacon. 😉 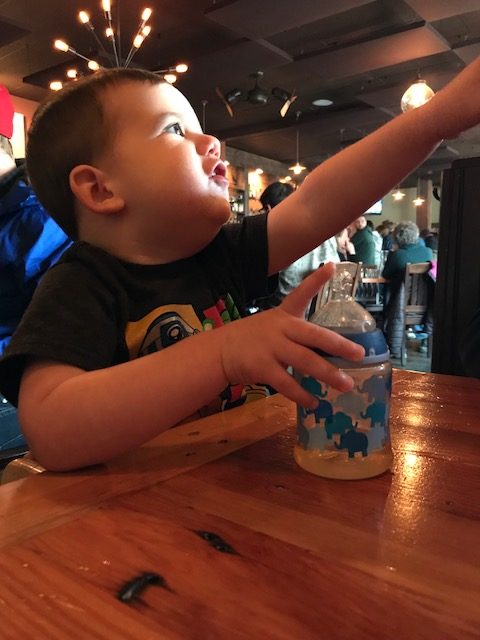 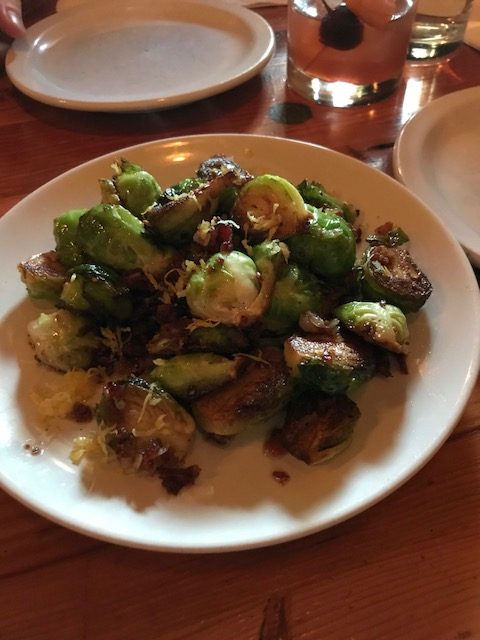 We saw a couple at the table next us who had a kid a few years older than Logan. They were SMART–they ordered the kids mac n’ cheese plate first and asked that it come out right away to keep their kid occupied while they waited for their entrees. Pro Move. We took note for next time!

These days Logan lives on mac n’ cheese, grilled cheese and bananas so we ordered him the kids fish n’chips for something different. He had a few bites of the fish but wasn’t a fan. He ate a ton of fries and the peas, so that’s good. 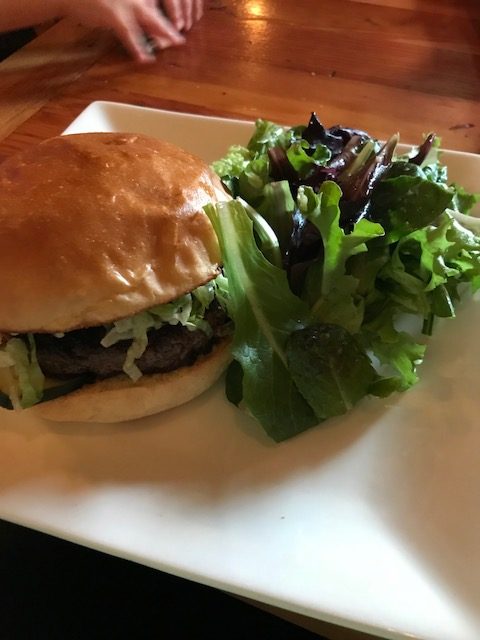 I got the classic burger that had onions, pickles and Russian Dressing and cheese. Michael got the Bleu Cheese burger. I got salad with mine. The burger was tasty but not memorable. Michael agreed. I’d definitely go back, though. It was a cool vibe, the rest of the food was really good (and I had the fish for lunch the next day and it was good!).

On Sunday, I went swimming and did the usual stuff around the house. Then the weather was nice enough after grocery shopping we all went for a walk. Lots of signs of spring! Thank goodness! 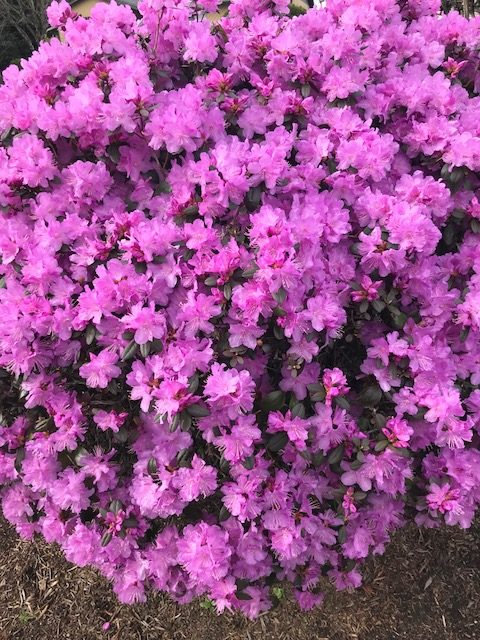 For dinner Sunday night, I tried making spaghetti squash in the pressure cooker. I found this recipe and gave it a try. 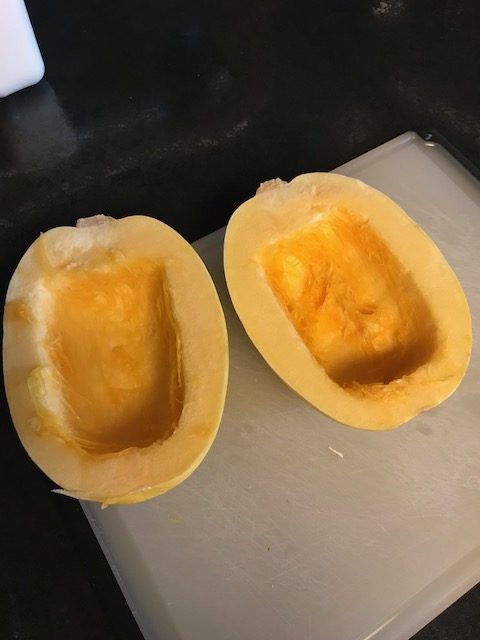 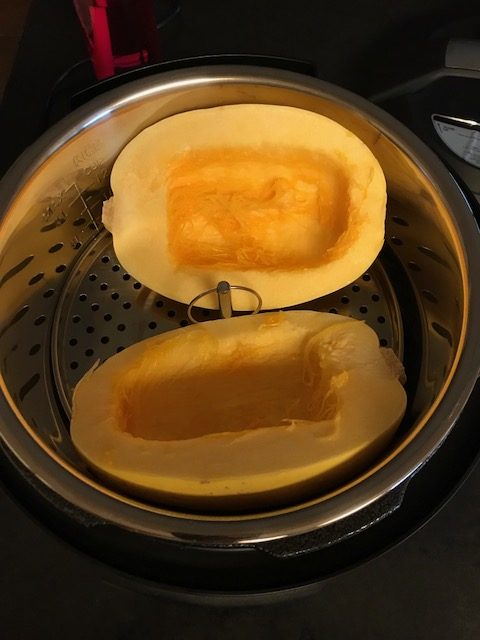 While the spaghetti squash was cooking, I simmered some sauce with meatballs. 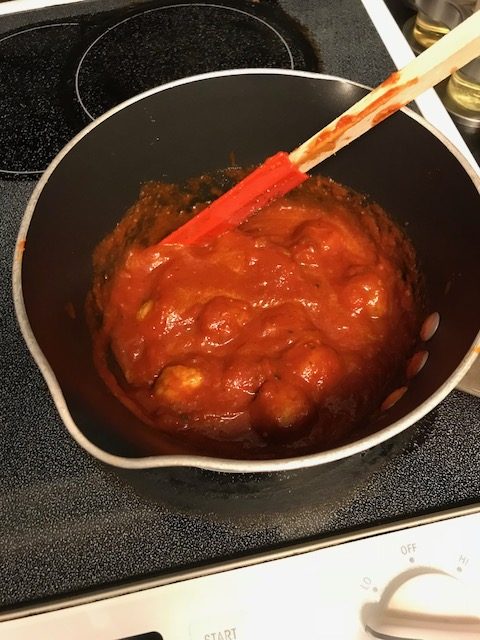 The verdict? Amazing. Game changer. The spaghetti squash was cooked in 8 minutes and it was PERFECT. It shredded into spaghetti noodles like NOTHING. We were both in awe and decided we could have spaghetti squash once a week now because it was SO fast and easy! 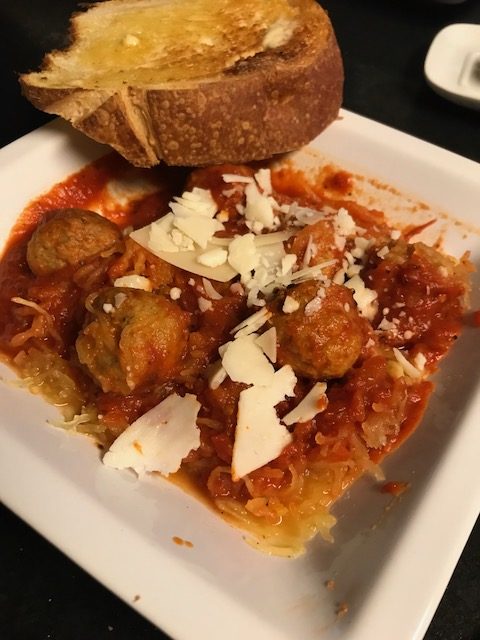 QUESTION: What did you do for St. Patty’s Day?

Did you have any doubt that I had some Irish blood in me? Dark hair, super-duper pale skin covered in freckles and the inability to tan. Oh yeah, I’m Irish. And apparently lucky! I saw a rainbow here in Portland. There has to be something positive about rain, right? 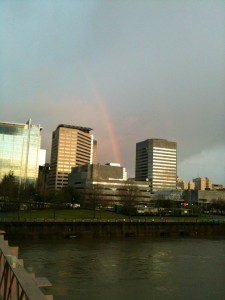 Normally I don’t celebrate St. Patrick’s Day but some friends were hosting a dinner party with traditional Irish eats and I just couldn’t pass that up. Plus it had been too long since I’d hung out with them.

The original plan for Saturday night was for Michael and I to go to my cousin Anna’s house for dinner. When we made these plans a few months ago, we both forgot that it was St. Patrick’s Day. I had already planned on making this dessert so even though it’s not “Irish,” I made it like I planned. It just sounded too good not to try. AND I had a new mini loaf pan I wanted to try. 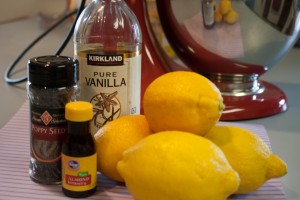 Here is that recipe: 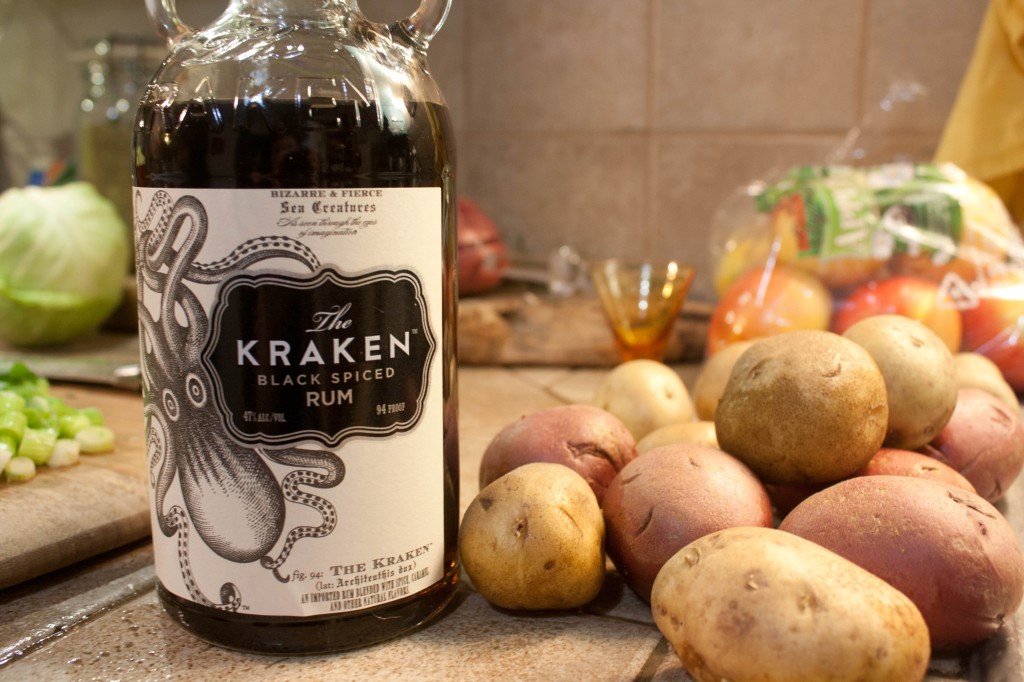 It smelled sooo good as it was baking. In my opinion there is nothing better than the smell of lemon. Lemon squares are one of my favorite desserts. Lemon bread? Even better. 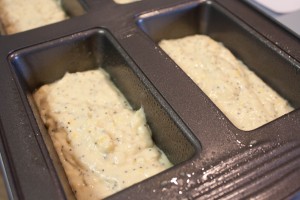 Michael spent the day remodeling my bathroom and I stepped in to help periodically in between cleaning and baking the dessert. The kitchen smelled deliciously lemony. So how was the dessert? It turned out to be a big hit at the party. I took three of the four mini loaves and I frosted one of them with vanilla frosting. I liked them with frosting–so give that a try. 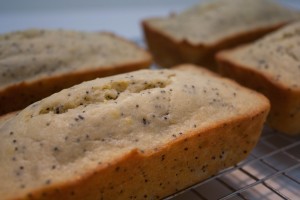 Here are some pictures of the St. Paddy’s Day festivities: 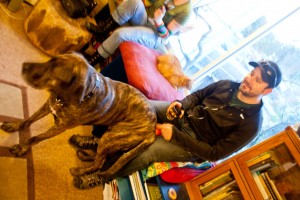 That would be their 100+ pound Mastiff mix puppy trying to sit on Michael’s lap. Hehehe. He was a cutie. They also had an older golden retriever who too sweet for words and German Shepherd puppy who loved belly scratches. The cats seemed indifferent to the house full of guests. 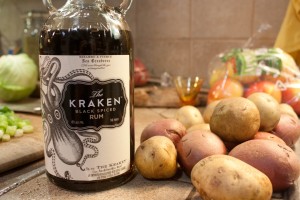 While rum isn’t really “Irish,” there was plenty of other Irish things at the party–whiskey, Flogging Molly on Pandora, and of course the food. 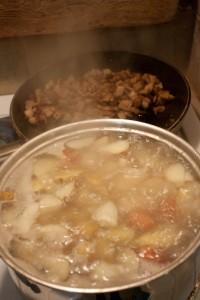 Cabbage cooked with bacon and onions, delicious mashed potatoes with blue cheese, soda bread (plain or one loaf with currants and cranberries) and of course the BEEF. 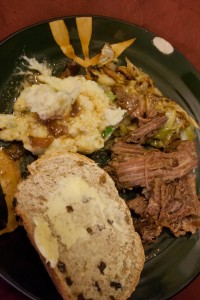 Everything was absolutely delicious. The meat was tender it fell apart with the single touch of a fork–no knife needed. The cabbage was gone in seconds and the mashed potatoes were creamy and had just a tang of the blue cheese. They mixed in diced green onions to the potatoes, which was a clever and delicious way to make them. I really liked the soda bread with the fruit in it more than the plain bread. It was my first time trying soda bread, too. 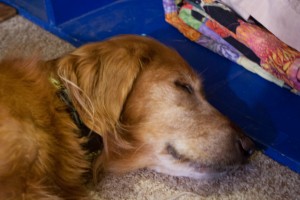 As the night went on, more and more people arrived and munched on the leftovers. We all hung around talking and enjoying the evening and before we knew it, it was after 11. (I know, that’s not that late–but when you get up early and kick ass at the gym and then spend the rest of the day doing house remodeling projects, you get tired early!) Look, even the puppies were pooped!

It was a fun night of festivities. It was great seeing friends I hadn’t seen in awhile and we made plans to all get together soon for dinner. I’m really hoping that Spring will bring a completely finished kitchen so Michael and I can host a dinner party.

QUESTION: What did you do for St. Patrick’s Day? Any good eating?