Know Your Limits, But Don’t Get Discouraged 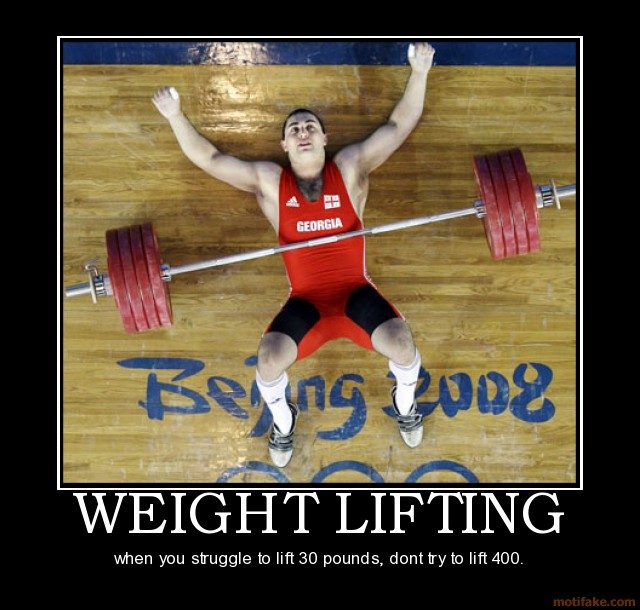 Recently I caught an episode of the Extreme Makeover Weight Loss show. I don’t really watch those “Biggest Loser” type shows anymore for a lot of reasons but I watched a few episodes of this show. One in particular was about a guy who started out in the 400 pound range. He lost a significant amount, then fell off the wagon and gained back a bunch of the weight. The personal trainer had him doing interesting but in my opinion, dangerous workouts.

First, he had to climb over 100 flights of stairs at a tall building in Chicago. This poor guy was like 380 pounds and doing something so strenuous I thought for sure he was going to have a heart attack in that stairwell. He looked woozy by the end.

Second, his trainer took him and his brothers out for a 100 mile bike ride. Really? I scoffed at this and immediately lost respect for the trainer and the show. I don’t think the show has integrity or realism, but more on that later. It was a hot summer day, about 100 degrees in the sun but the trainer said “it will be 110 degrees biking on this hot pavement.” Really? You’re taking a morbidly obese man who hasn’t exercised at all in three months out into 100+ degree weather to bike a century with no training whatsoever?

Can you guess how this ride ended? Around mile 30 he started to fatigue and feel the effects of heat stroke. At mile 40 he was incoherent, delirious and suffering from heat stroke so badly they had to call 9-1-1. He was hooked up to oxygen and fluids and the bike ride was over. DUH. I was irritated with the show because of this and it brings me to today’s important topic of knowing your limits.

It’s easy to get caught up in the excitement of a goal or event and lose perspective on our abilities. Especially when we are big weight loss losers. It’s easy to feel overly confident because for once we can do something wonderful! We aren’t picked last for the team, we can run! We can bike long distances! Woo hoo! And the tendency is to bite off more than we can chew. I know I’ve been guilty of that.

I trained for Hood to Coast for a year. I was a fairly new runner but I was feeling confident and strong. I was running a lot. I thought I would be unscathed running something as epic as Hood to Coast. My longest run while I was training was about 8 miles without stopping or walking. That’s pretty good, but not good enough. My mileage for Hood to Coast was 17 miles. I should have been clocking in over 20 miles a week before the race and my weekly mileage was more around 15. Not good enough. I ended up injured.

I learned from my mistake with Hood to Coast and knew my limits when it came time to do the Portland Century. Was I conditioned for 100 miles on the bike? Sure–in a way. My fitness level is strong. But am I bike strong? Not really. I knew I wasn’t conditioned enough the complete the 100 miles without hurting by the end. That’s not fun. My weekly mileage on the bike was hovering around 65 miles and I knew that wasn’t enough training to do 100. I switched my miles to 72. Not quite a Century, but it’s still a great accomplishment. And I don’t regret that decision at all!

I see a lot of people in the blog world making this mistake. They are new runners and they sign up for a half marathon as their first race. Don’t get me wrong, I commend their enthusiasm and determination. I just silently worry about their bodies holding up. Why not start small? Do a 5k, then an 8k, then a 10k…? There is something to be said about working up towards a big goal.

Besides risking injury, you are robbing yourself of the joy of getting better and challenging yourself. Last year I biked 55 miles in Reach the Beach and this year I did 72 miles in the Portland Century. I was SOOO happy! I did 20 more miles this year without any issues. Awesome! That means next year I can totally rock 100 miles! And I’m looking forward to it.

There is something really special about challenging yourself to try harder, do more, bit by bit. It’s why training for things is so fun. You start small and work up the ladder. You earn that big accomplishment by the end!

That does not mean you should be discouraged, or feel less than someone else who is doing more. I did not feel like less of an athlete because I biked 72 miles instead of 100. I still felt like a rockstar at the end! Don’t get discouraged that your abilities are not quite what you expect them to be. It takes time. It takes training. You’ll earn it.

QUESTION: Do you agree or disagree with this? Do you know your limits?