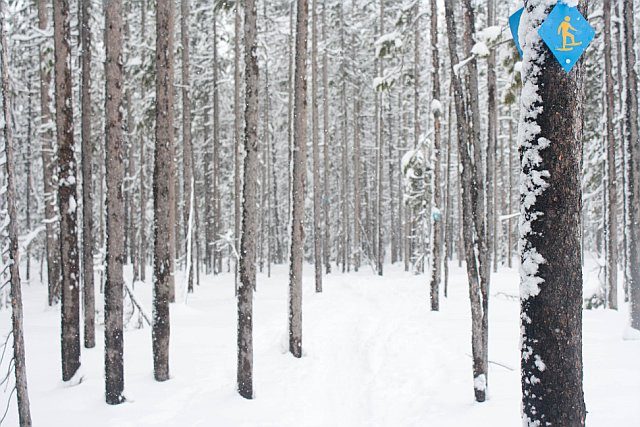 Saturday morning we woke up to sunshine and snow falling! I was glad it wasn’t raining. The flakes falling were light and fluffy. I turned on the gas fireplace (I loved that thing) and made us breakfast. Thankfully I packed a bunch of food for us. I love staying in places with kitchens!

Breakfast was bagel thins toasted with cream cheese and smoked salmon. We split a large navel orange and then got dressed in our snow gear.

From Sunriver it was only about 12 miles up to Mount Bachelor. The snow was heavy and covered everything in a blanket of sparkling white.

We parked at the Edison Butte Sno-Park and that’s where we went snowshoeing. The snowshoeing book I bought recently discussed this particular trail and recommended it. It was classified as “easy” and around 3.5 miles long total.

It was a popular place for snowshoers. There were a bunch of different trails and loops to choose from.

A few days before we arrived in Bend, Mount Bachelor got 72 inches in 72 hours! They even shut Bachelor down for a day or two.

There was SO much snow! I’ve never seen so much. It was fresh snow too–soft and deep, not compacted or frozen. We discovered quickly that we sank into the off-trail snow pretty much to our knees!

A trail had been forged in the fresh snow but the trail was narrow and barely wide enough for snowshoes. Michael struggled a lot because his shoes are bigger than mine. We set out on the trail. It was a lot of up and down hills. We trekked through the trees and were dwarfed by them. I love the Ponderosa Pines and how they look in the snow.

The sky was a cornflower-blue-gray but it was clear. It didn’t snow much while we were out there until we turned around.

I’m not sure how far we snowshoes on Saturday. We ended up turning around and doubling back instead of completing the loop.

The trail was getting very difficult and the snow was so soft we were sinking into it. We turned around. It was mostly uphill the way back.

We got back to the parking lot. I was feeling good and could have gone further on another trail but Michael’s hip was bothering him so we called it a day. It was better to cut it short and be able to snowshoe the next day than have him crippled!

We returned to Sunriver to clean up, change and eat leftover pizza for lunch. Then we went to downtown Bend to walk around and shop (mostly window shopping).

We also walked around Bend and Mirror Pond, then grabbed a beer (Boneyard IPA was my favorite beer of the weekend).

We went to Amalia’s for dinner. It was a Mexican place in Old Town. It was packed! The food was pretty good. I had a pork enchilada. I was good– I wanted to eat it ALL but I ate half and saved the rest! Go me! Michael got the chorizo and steak tacos.

We got back to our rooms at Sunriver and Michael went to bed. He was hurting pretty bad. I stayed up for a few hours editing my book by the fireplace. It was a great day.

QUESTION: What’s the most snow you’ve ever been in?