It was a hard one! I was glad I worked up a hard sweat though. I had plans afterward! 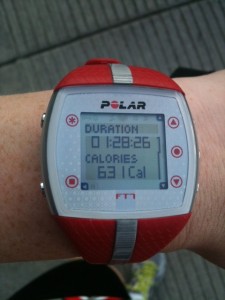 There are a lot of good restaurants in Portland, but honestly it’s rare that both Michael and I walk away from a meal gushing. “Oh my god, that was so good.” And then hours later, “That dinner was really, really good!” Not only that, we both agreed that it was a good enough Mexican restaurant that we could take his parents when they visit from Texas…that’s high praise considering they refuse to eat Mexican food outside of Texas. Que Pasa Cantina in Portland raised that bar. 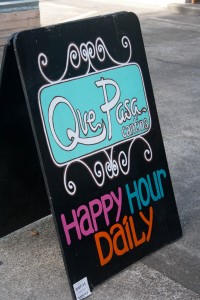 Michael and I went recently to use up a Groupon that was expiring soon. (We’re running low on our Groupon purchases!) I’ve been to Que Pasa before, but it was at least 5-8 years ago. It was a distant memory and I couldn’t remember whether I liked it or not. The recent visit will always be in my memory now! 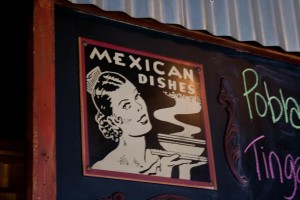 The place is trendy and in the SE Hawthorne neighborhood (warning: parking is a nightmare, be prepared to walk). It’s right next to the Hawthorne food carts. Que Pasa also has outdoor seating. 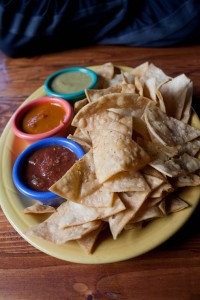 The typical “chips and salsa” is not brought automatically, in fact it costs a few bucks extra to have it. At first we were going to skip it, but decided to try it and it was totally worth it. The chips were homemade and they are probably the best tortilla chips I’ve ever had. They were thick, warm like they were fresh out of the oven, and had a mysteries seasoning on it that made my mouth water. The chips were thick, almost like pita chips. The salsa trio was delicious: a regular one, a creamy avocado salsa, and the middle one was so spicy I could barely stand it. 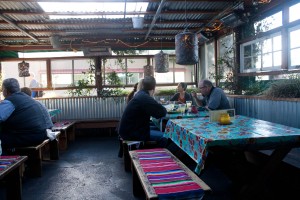 I had a hard time deciding what to order. Everything sounded delicious but I was trying to make a good choice–a sensible choice. Thankfully, I did not order a burrito which was humongous (but looked amazing). I thought about the Mexican Chopped Salad but it came in a fried shell. I thought about the Jalapeno Mac n’ Cheese but at the last minute I ordered the corn tacos. 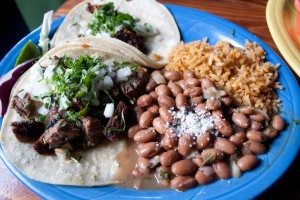 My dinner was two soft tacos–one was carnitas and one was steak. I skipped the refried beans and got the pinto beans instead. The rice was tangy and delicious (Michael even commented that he loved the rice and he usually doesn’t like it). 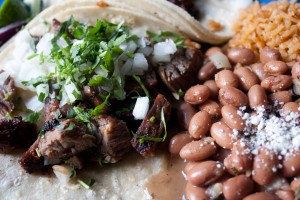 The steak had a sweetness to it but it was mild. The carnita taco is where it’s at, though. The meat was melt-in-your-mouth soft with a little bit of smokey crunch. For the life of me I could not figure out the spice they used on the carnitas but it was mind blowing. 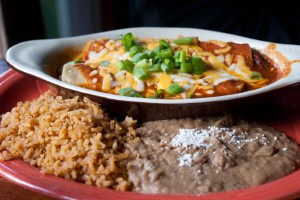 Michael’s dinner was the winner of the evening. He got the chicken enchilada. At first our portions looked tiny, but they were so incredibly filling I was full all night. His enchilada was decadent and the sauce was a cross between tangy and spicy as hell.

We walked out of the restaurant into the blinding sun, our bellies full and happy and slowly strolled back to the car. We were both satisfied and incredibly impressed by the meal. We will be back. By far, one of the best Mexican restaurants in Portland.

QUESTION: What do you think is the “healthiest” choice at a Mexican restaurant?