When Michael’s dad was in town we took him to the few places we were considering for the rehearsal dinner. The first one, Firehouse, was one Michael and I had discovered recently. I wrote about it and share pictures of their amazing rental space here. I met Michael and his dad on a recent Friday night after my yoga class was over with.

We started with an appetizer and shared it: the potato croquettes. It came with a really spicy vinegar dipping sauce that was pretty overpowering. So much so that my mouth was still “stinging” a few minutes after eating it. I did not like the sauce at all. The croquettes themselves were okay though. 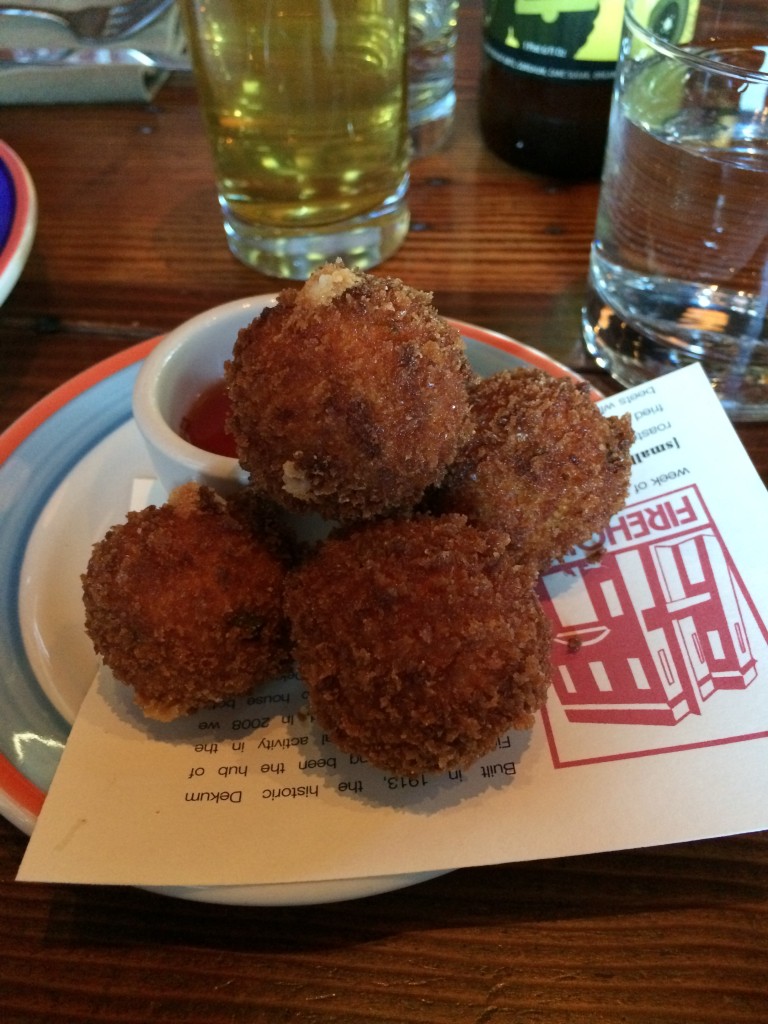 Next up, Michael and I both got salads. I got the salad with Humboldt Fog goat cheese, currants, hazelnuts and a red wine vinaigrette dressing. LOVED it! Just like the first time, their salads are amazing. Michael got the Caesar salad, same as last time as well. 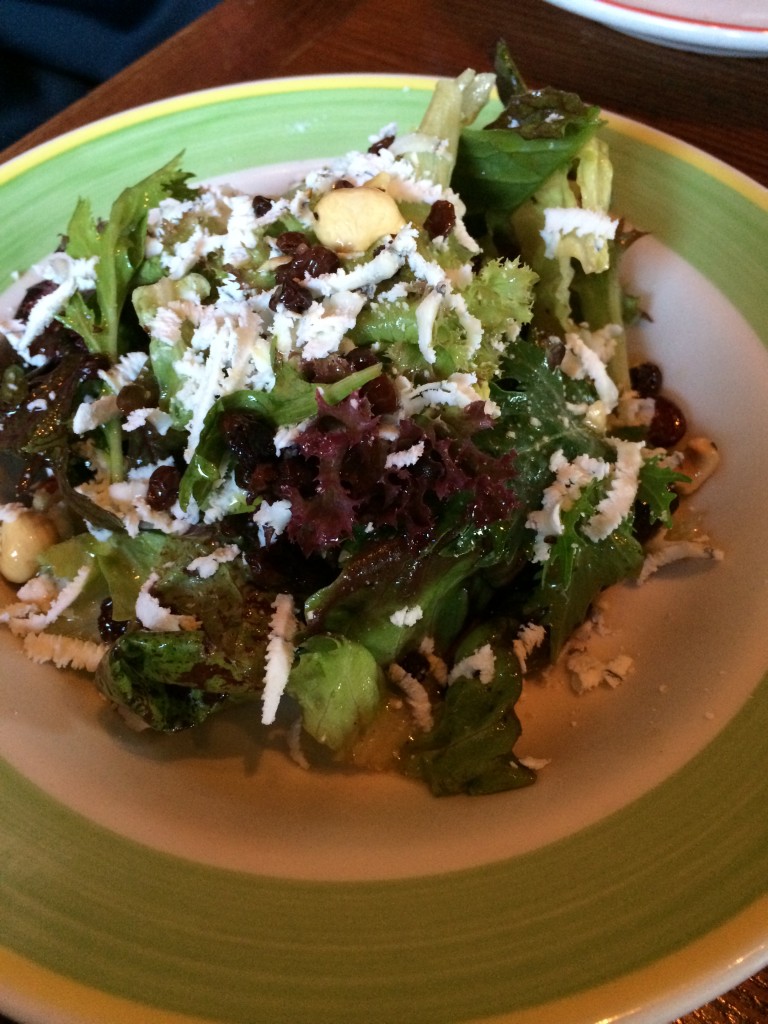 For the main courses Michael ordered the pizza with sopressatta and fresh mozzarella cheese. The first time we ate at Firehouse we both loved the flavor of the pizza–the smokiness and richness–but once again it was kind of soggy in the middle. That was disappointing. Michael’s dad got the steak salad and raved about it. He said it was fantastic and I’m glad he enjoyed it! My entree was the handmade cavatelli pasta with baby carrots, fresh basil and pesto and topped with ricotta cheese. 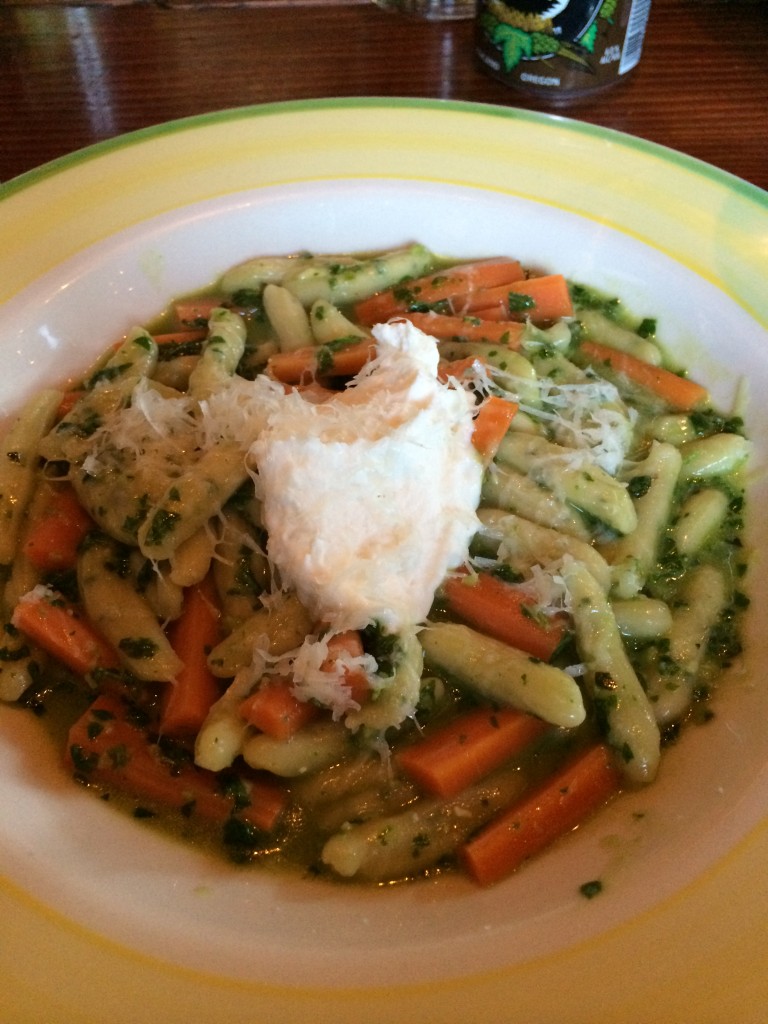 I loved my pasta! Handmade pasta is fabulous and I don’t usually order a pasta dish in restaurants (the carbs, the calories, etc) but this was something special. The real show stopper, like before, was the dessert. The owner kindly comped us our dessert, which was very nice. We ordered the pot de creme. It was really thick chocolate mousse with caramel swirled inside it, topped with a light dusting of salt, toasted hazelnuts and whipped cream on top. It was heavenly!! The salt really balanced out the rich sweetness of the dessert. 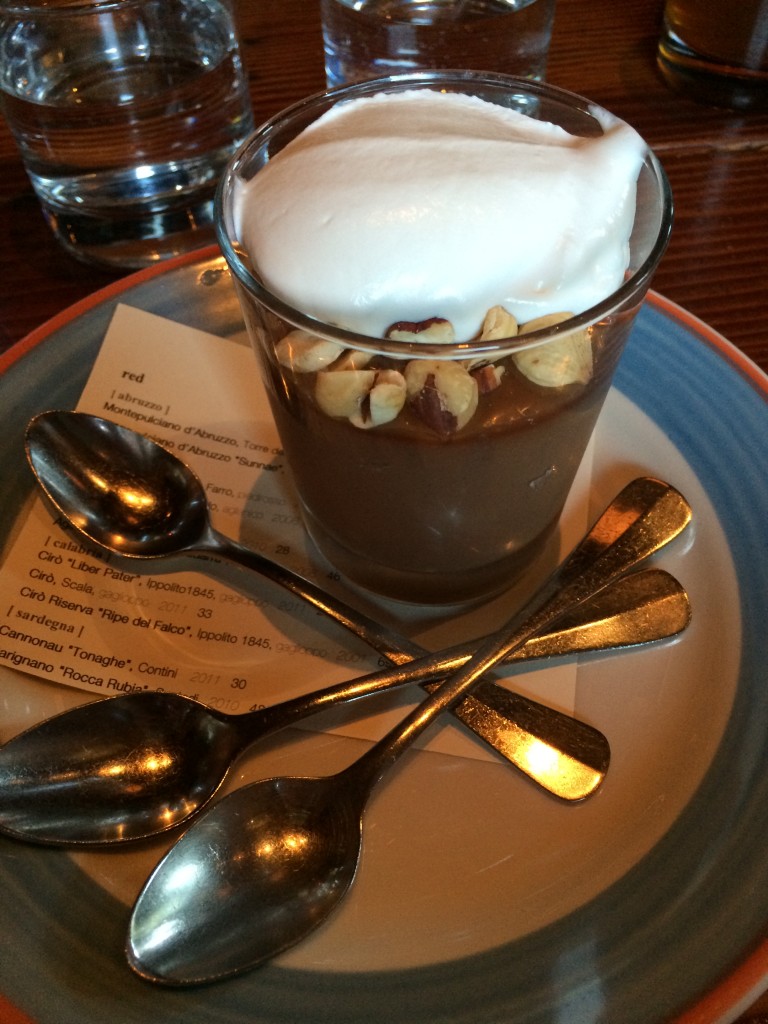 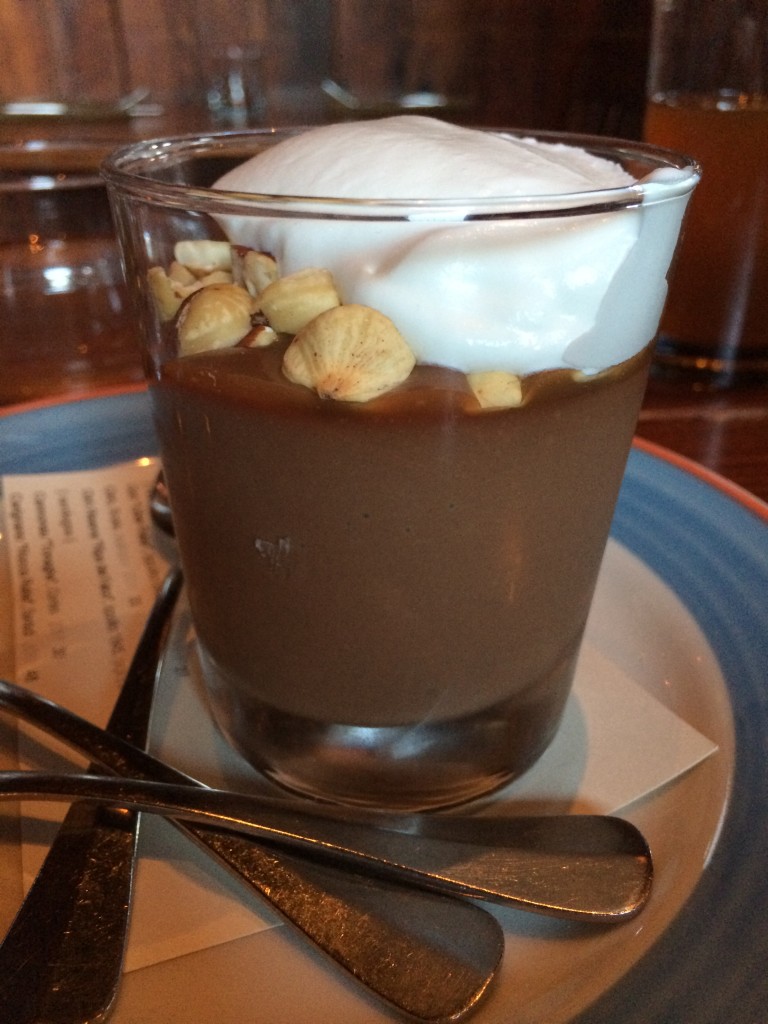 The three of us shared the dessert. It was so amazing but too rich for one person to eat.

What was wrong with our meal? Nothing really but once again the food was pretty salty. We felt that way about the food the first time we were there but I thought maybe it was a fluke. Going back again and really tasting how heavy handed they were with the salt was disappointing. Despite that, we all left the restaurant feeling pretty good about it all and Michael’s dad also loved the rental space upstairs. He said it seemed very “us.” I was about 90% sure we were going to book it for the rehearsal but had one other place for Michael’s dad to check out first.

The next evening we went to Casa del Matador on East Burnside. I would describe it as an upscale, yuppy Mexican restaurant but don’t let that keep you from checking it out. The prices are actually pretty reasonable. 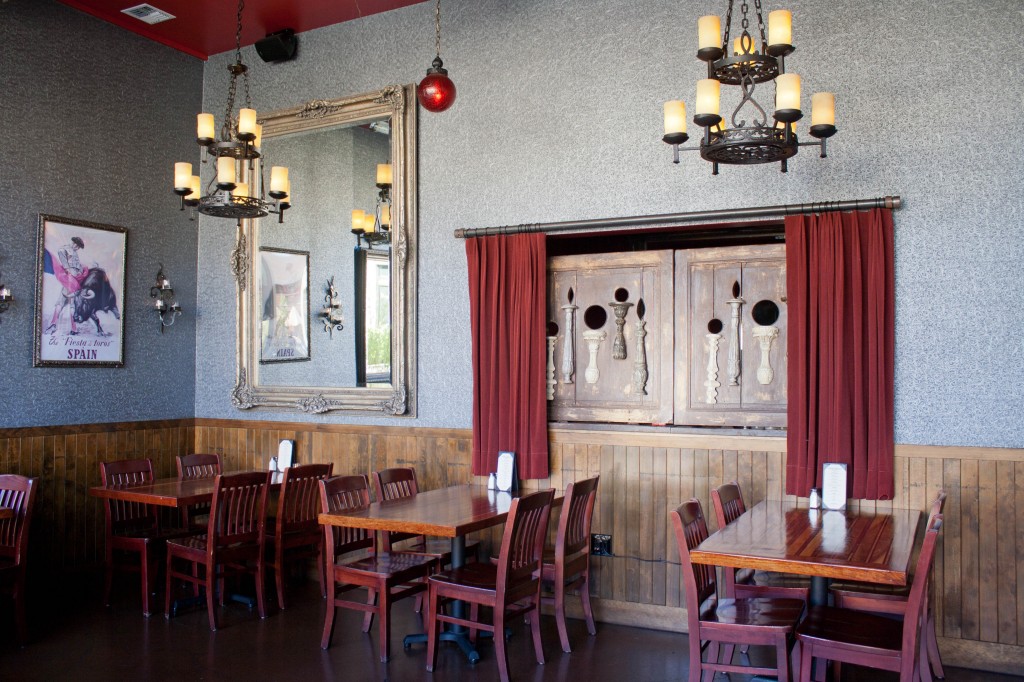 They have a big room in the back for party space. While it wasn’t as secluded and charming as the rental space at Firehouse, it was still a cool spot. It was fairly private, there were big, heavy red curtains than can close off the room from the rest of the restaurant. There was also a “Garage Door” style wall that was open, which was nice because it was so warm and sunny outside, but there were a bunch of tables outside so if we did have those doors open during the event I wouldn’t really want strangers sitting at the few tables right next to us outside… 😛 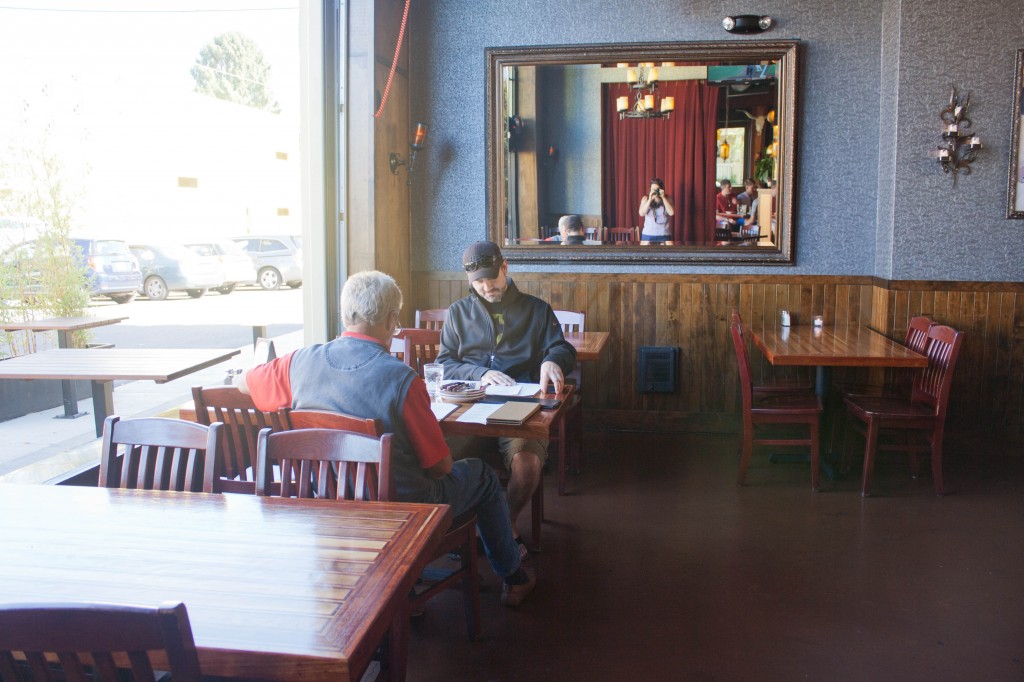 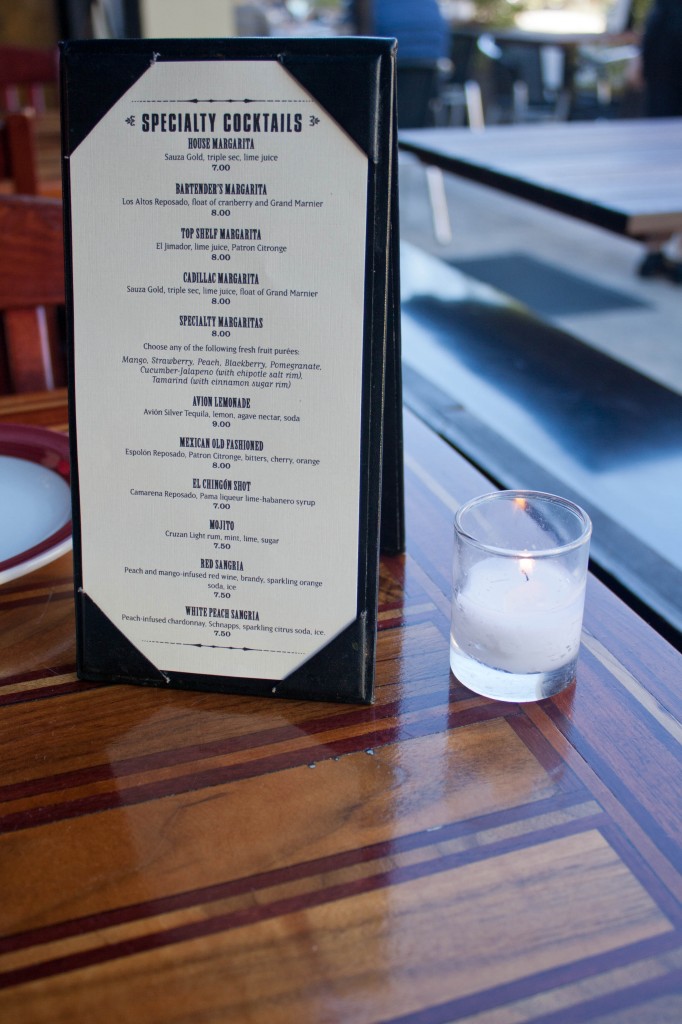 The manager sat us in that room so we could get a feel for the place. I liked it a lot. The boys ordered beer (that wasn’t the kind I like) and I ordered a Ninkasi Total Domination. I love that beer but was disappointed they didn’t have my favorite (Boneyard) on tap like they did the last time I was there. Oh well! Ninkasi is still good. 🙂 After I ordered my beer I remembered that I had wanted to try their Bloody Mary’s–they are supposed to be outstanding. Damn! Next time. 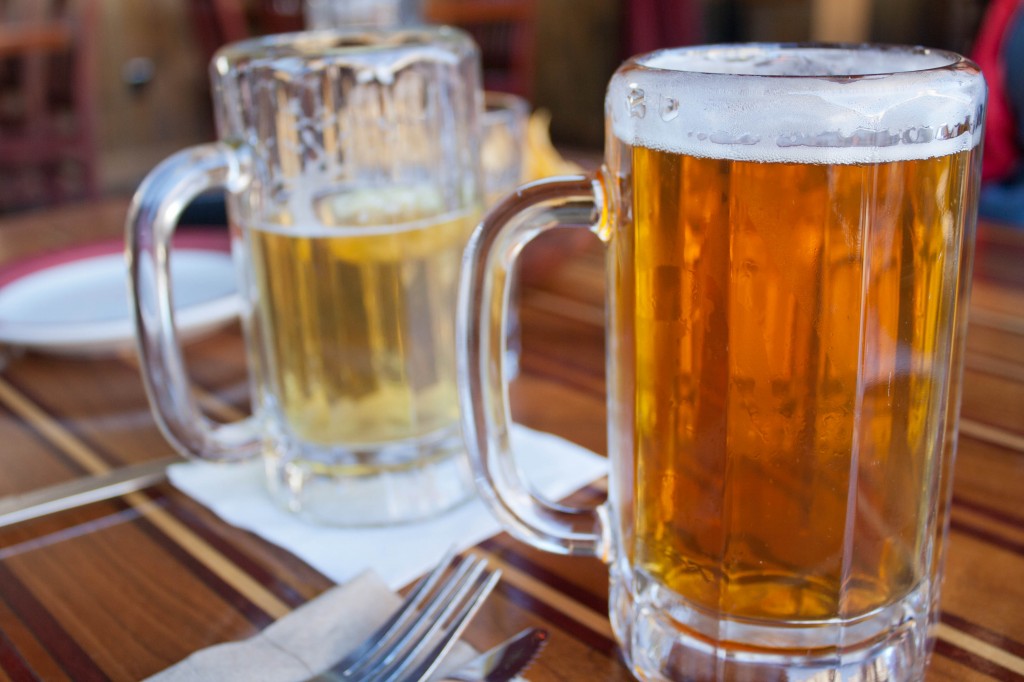 We shared an appetizer while we enjoyed our beers: the jalapeno poppers! I remember years ago when Michael and I were first dating we went to the Casa del Matador over in NW Portland and got the jalapeno poppers. I remember them being SO spicy my face was burning long after the meal was over. I was a little reticent due to that memory but was pleasantly surprised. Yes, these babies were still spicy, but they weren’t overly spicy. 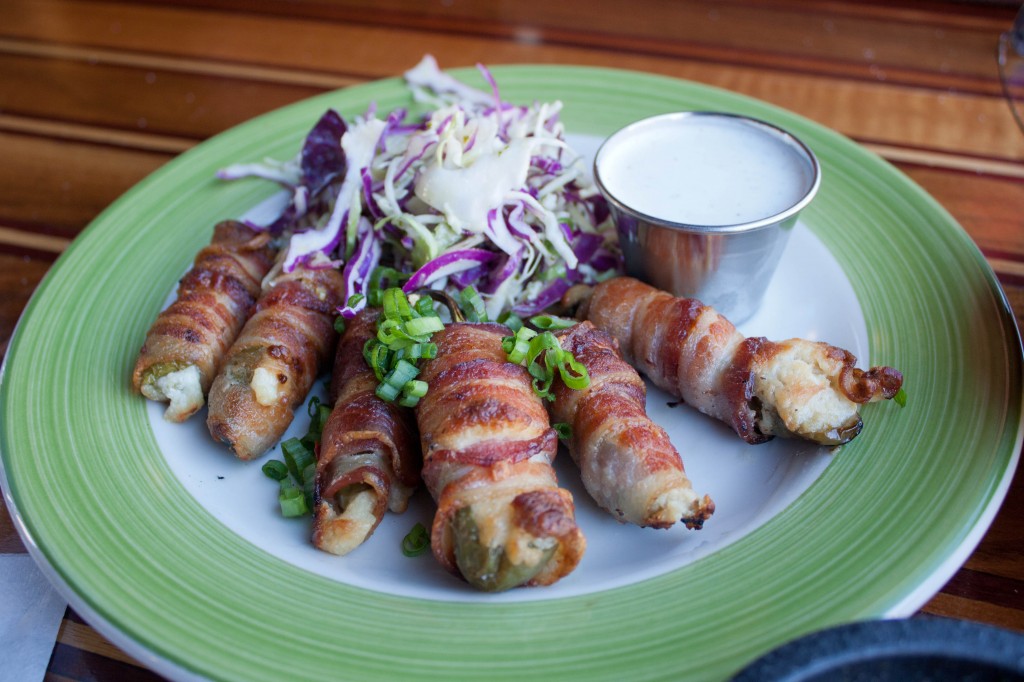 The jalapeno poppers were stuffed with goat cheese and wrapped in bacon. It came with a cabbage slaw and a little ranch dressing, topped with green onion. Everything about it was fantastic! Loved it. Michael and his dad both ordered the fajitas. I got the tacos–one carnitas and one carne asada. Came with rice and beans. 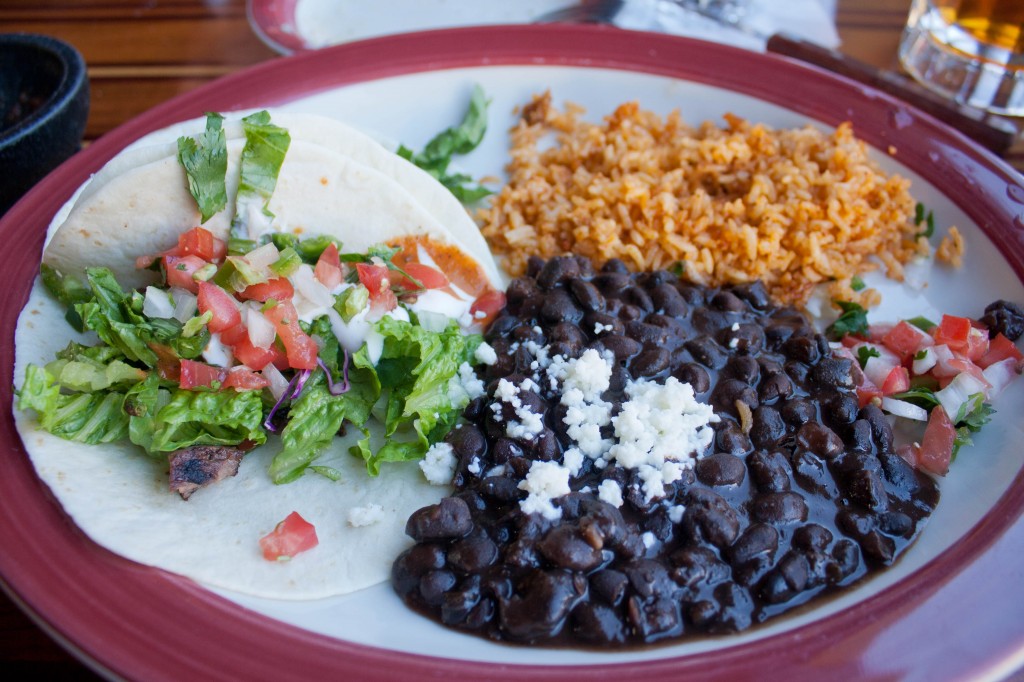 We ended up booking Casa del Matador for the rehearsal dinner right on the spot! We all agreed that the food was amazing. Since Michael and I have both been here at least a dozen times and it’s been consistently good every time, we loved the space and it would be a lot easier to get to from the wedding venue after the rehearsal (Firehouse was in NE Portland would have been a longer drive for people). In the end it came down to the food. Firehouse is good but the over salting of it was just too much in the end. I think Matador is a good choice and they even have options for vegetarians. We are working with them now to plan our menu. I cannot wait!!