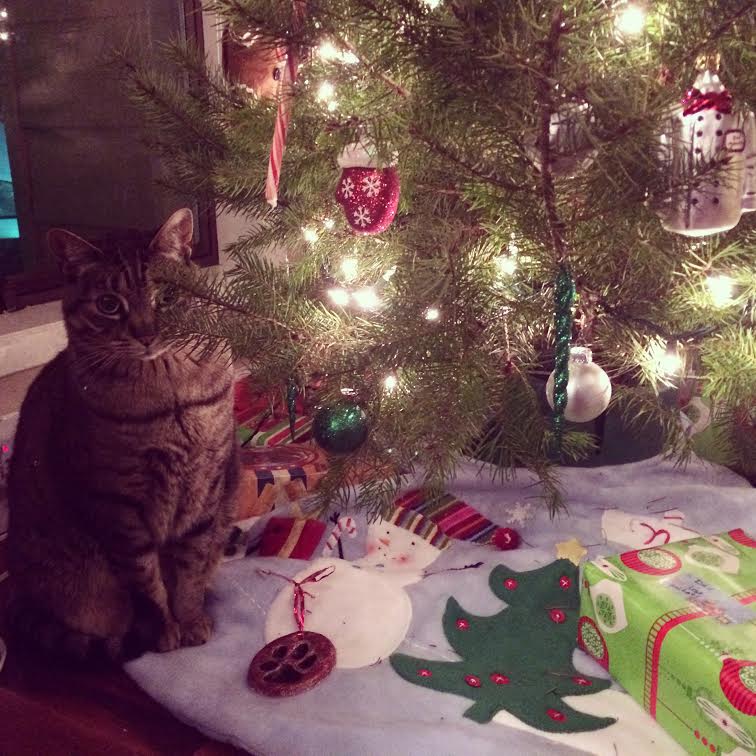 My office had a holiday potluck recently and I made some cranberry bread to take with me. I’d discovered a recipe on pinterest for an amazing looking cranberry pistachio bread and wanted to make it but it was really involved. More than I wanted to do on a Thursday night at 8pm. So I found a similar recipe that was a little more simple. Here it is:

I mixed everything in the Kitchenaid mixer (I love this thing) and then poured it into the mini loaf pan that I have. Using that instead of a regular sized pan I got 3 loaves of the bread out of it. The only change I made to the recipe was using the Splenda Blend instead of regular sugar. 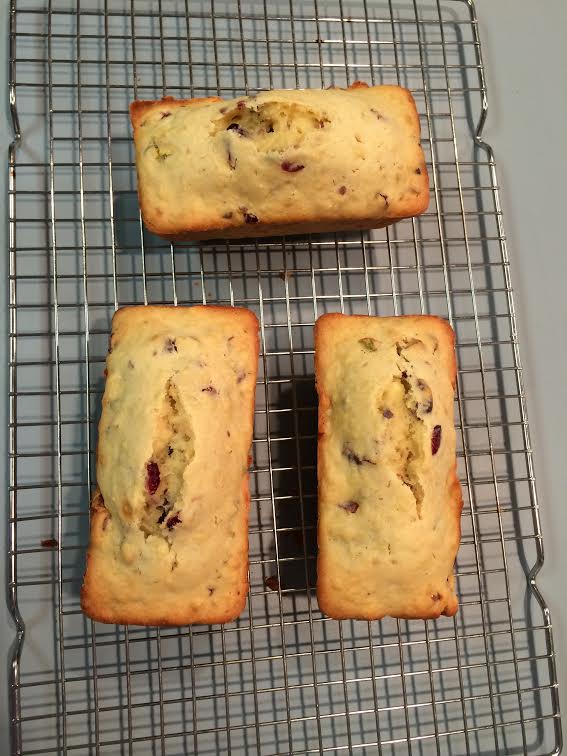 Using the Splenda blend I got calories down to around 135 each slice. I baked the bread for less time than the recipe called because the loaves were smaller. The recipe called for a glaze, as well. I skipped that for a few reasons. It was late in the evening and I didn’t want to do it and I honestly don’t think glazes or frosting add a lot to a recipe except for calories! 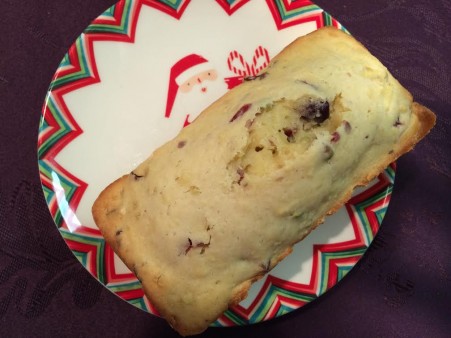 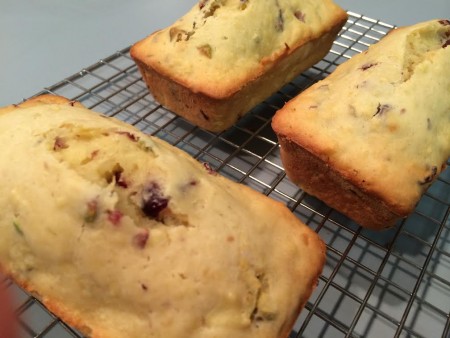 How was the bread? It was really good! It was dense, not dry but dense. I think next time I make this I’d use plain Greek yogurt instead of vegetable oil, and maybe a little applesauce. I liked the mild flavor. There was a touch of sweetness from the cranberries and apple chunks but it was mild. It would be a great recipe for someone trying to watch their sugar intake.

Since I made the mini loaves, I had an extra one that I ended up taking to a friend’s house for her holiday party. 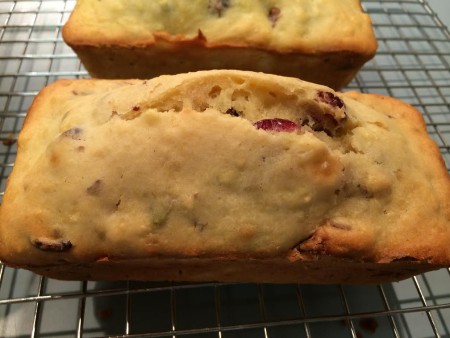 Every few years she throws a house warming/holiday party and then we all go and walk along Peacock Lane. Peacock Lane is a short residential street in SE Portland that gets all decked out for Christmas. It’s actually a requirement for the homeowners to decorate!

Since the 1920s, each house in this quaint southeast neighborhood has been decorating for Christmas. Mostly Tudors, the houses are adorned with not only beautiful sparkling lights, but also nativity scenes, rotating Christmas trees and stunningly life-like replicas of Santa and Frosty. Be forewarned: this is a very popular Portland tradition and the crowds can get quite thick. It is wise to park several blocks away and walk, rather than drive through the area.

It’s a fun thing to do to get into the Christmas spirit. It’s not really necessary to do it every single year, we generally go every other year or so. So I took a loaf of cranberry bread and a bottle of wine to Sam’s house and we all hung out, eating (she made these turkey meatballs with a BBQ sriracha sauce that was amazing) and drinking before walking down to Peacock Lane. 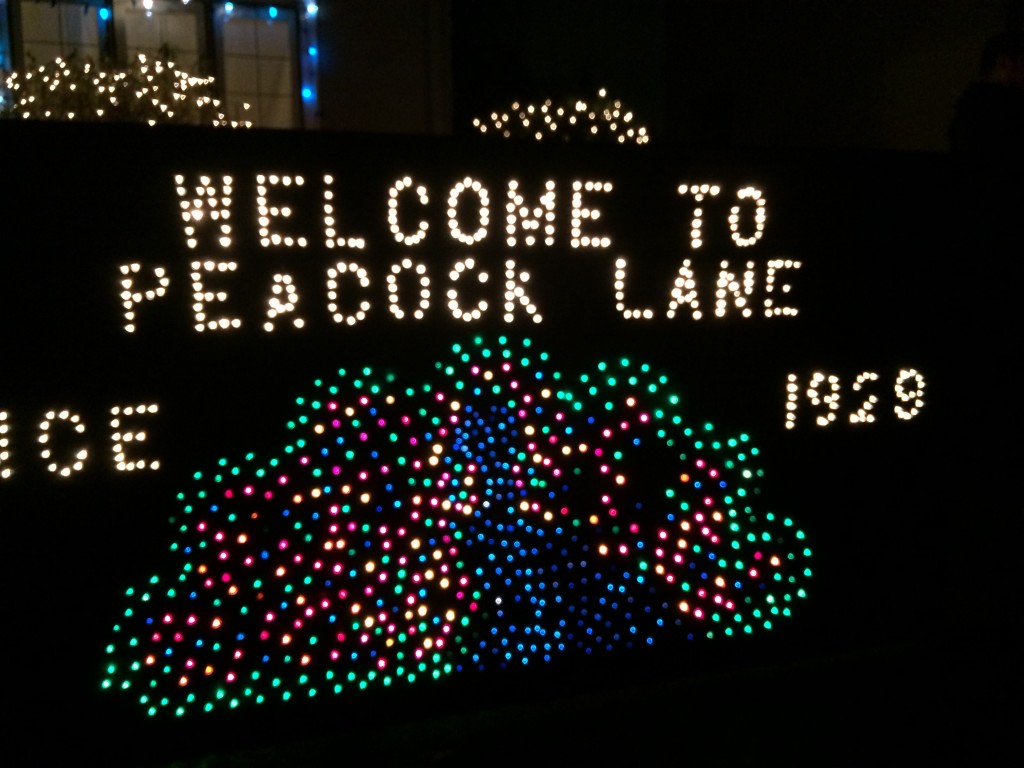 We had a great time at the party and then a bunch of us walked down to Peacock Lane. With Bella! It was raining pretty hard but we still had a good time (and got totally soaked). 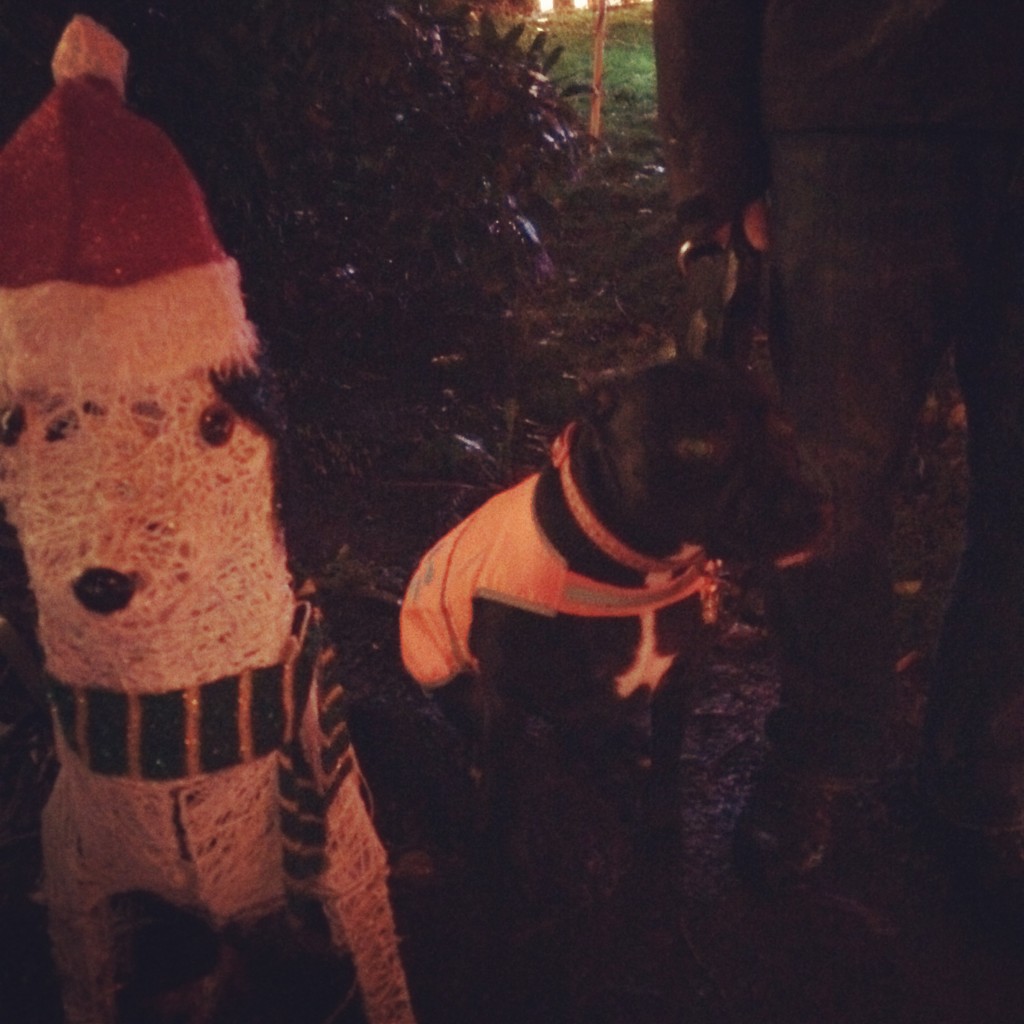 Bella did a great job! There were so many people that I think she was overwhelmed and so she didn’t bark at anyone. It was great! 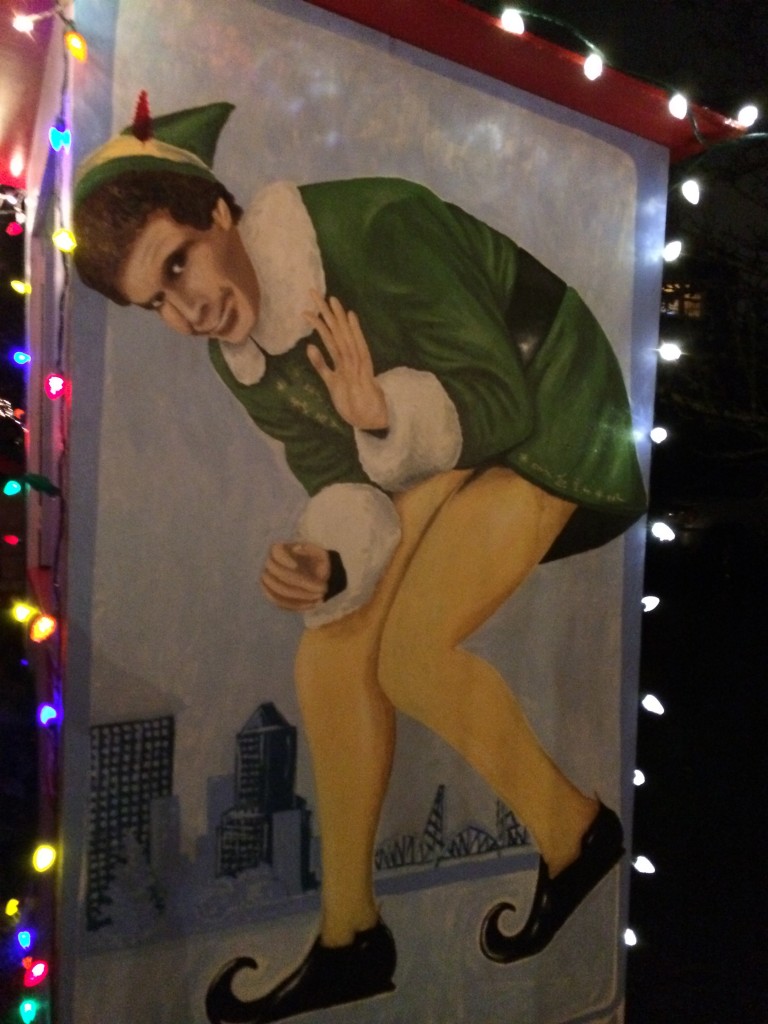 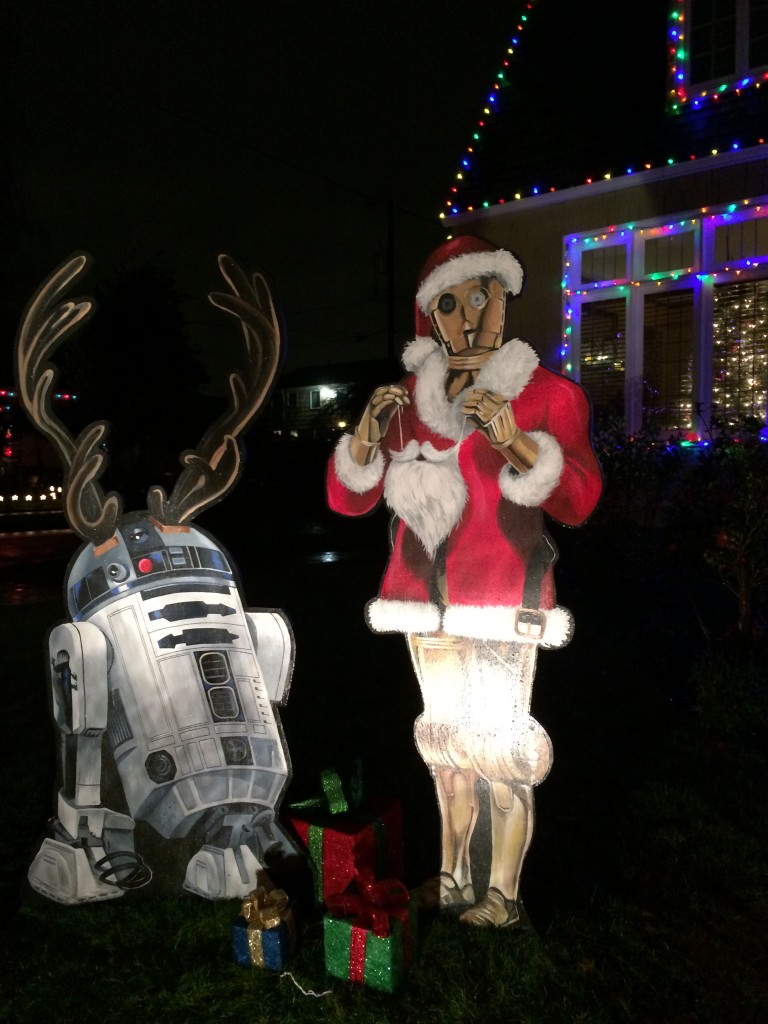 My cousin Anna and her friend came to the party and they walked Peacock Lane with us. It was fun! We chatted, they snuck a little adult beverage in non-see through cups and shared with us as we tromped around in the pouring rain looking at Christmas lights. 🙂 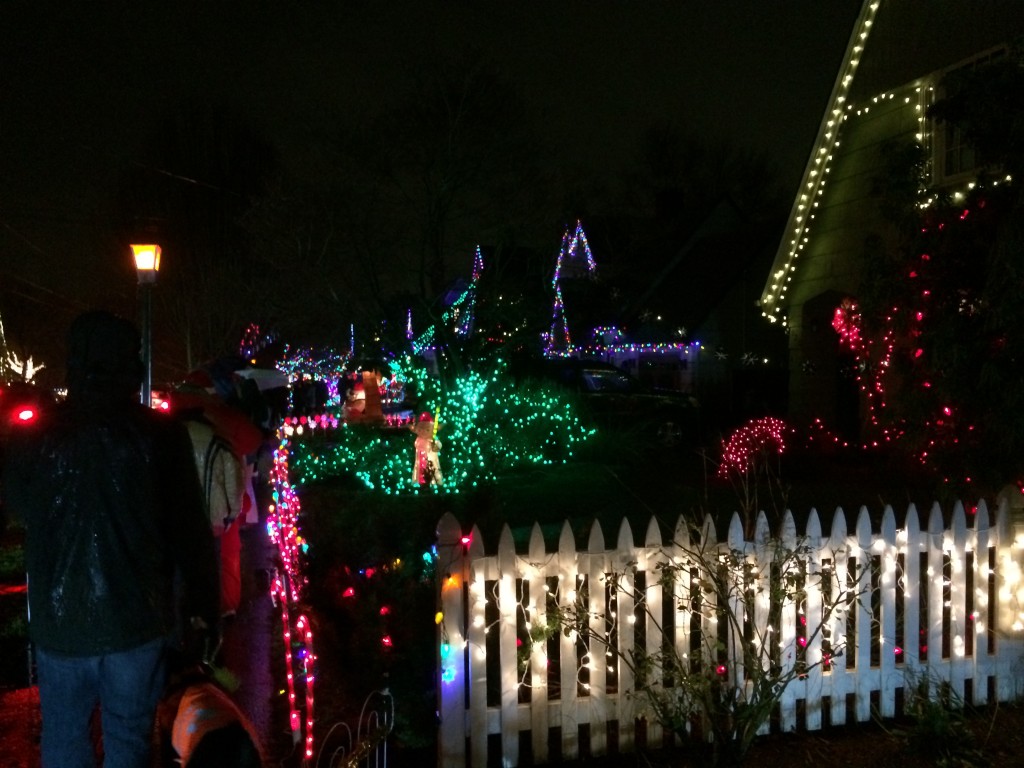 I’m so proud of Bella! She’s really growing up. She’s not freaked out by strangers as much anymore and I’m excited to be able to take her more places and not worry about her being scared of everything that moves. Anyways, we went back to Sam’s house after walking Peacock Lane, soaked through and through, said our goodbyes and called it a night. All of us were very very soaked. My jacket is still drying out.