…Charlie Horse that is. What the hell? But let me get to that in a moment. 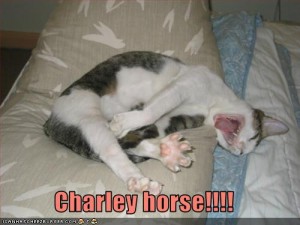 I got home from work on Tuesday and the weather was a little too iffy to attempt another bike ride outside. Michael worked on the garden outside, filling the composter, and I went back to the trusty ol’ Nike Training App workout. I checked out the new Law & Order LA (I love all the shows) while I worked out at home.

I did the Action Figure workout on the app and was dripping in sweat within 10 minutes. The High Knee Runs and Straight Leg Kicks will make your thighs burn! 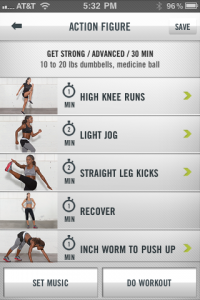 Instead of the “Recover” portion I did the Bosu Ball as an “active recovery.” Michael recently bought a Bosu Ball to do his physical therapy exercises at home. He’s had back/hip issues since December and the weekly physical therapy has really helped him a lot! Our lives are so much better now because of it. On the Bosu Ball I stepped up, then stepped down to the side and repeated to the other side. I don’t know what you’d call it, but it works the hips. 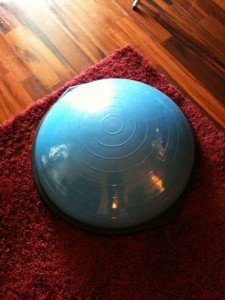 I did a bunch of those exercises on the ball whenever it was “Recovery” time on the app or it was an exercise I knew I couldn’t do. For Example: the Ski Jump to Cross Back Lunge. I skipped that one because it had “This Will Cause Knee Pain” written all over it! Plus I was already doing quite a lot of squat variations with this workout. 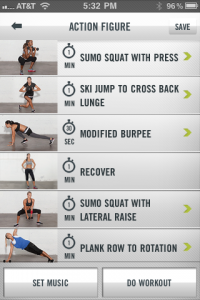 I like the Sumo Squat with Press a lot. I was able to do the Plank Row to Rotation (which made me pretty happy). And Michael walked into the living room when I was doing the Modified Burpee. He commented that I was able to do the Push Ups the “real way”–and a lot of them! All this time I’ve been discounting my efforts and saying that I couldn’t do pushups when in reality I CAN do them! And for real, too. I think all the weight lifting I’ve been doing has paid off. 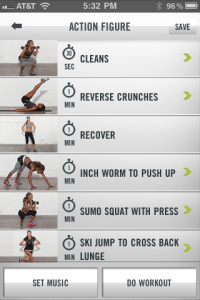 Confession: I didn’t feel anything when I was doing the Reverse Crunches. I wonder if I did them wrong or something? And the Inch Worm to Push Up felt like a waste of time, so I swapped in the Modified Burpees for that too. 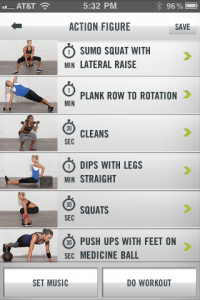 After 30 minutes of the Action Figure workout, I was ready to hop on the bike trainer. I was feeling really good about my abilities thus far. I also burned a nice amount in that 30 minutes: 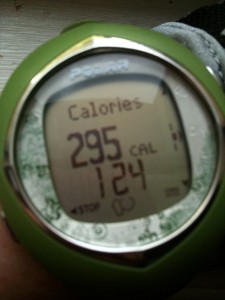 I hopped on the bike trainer and did another 40 minutes on the bike. That’s when it happened: The Charlie Horses! Oh my god, I’ve never experienced something like this before. It happened as soon as I started pedaling. I had a weird cramp in my right calf muscle. It stopped pedaling and it went away. Then it happened in my left calf muscle. I looked down at my form to see if it was something I was doing but I don’t think I was pedaling in a weird way. 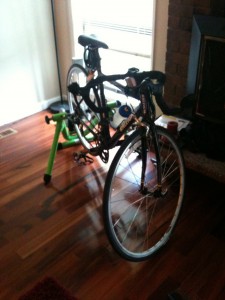 I kept pedaling and in about 5 minute intervals the cramps came back. They’d only last a second or two, and they weren’t painful enough to make me stop cycling. But I honestly can say I’ve never experienced something like this. What is it?? Am I lacking something in my diet? (I heard that bananas can help cramps.) Did I do too many squats before getting on the bike? Not enough water? Someone PLEASE tell me what the heck happened. 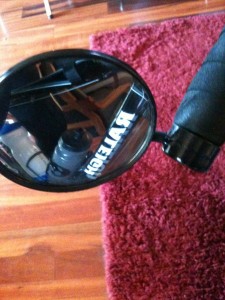 Whenever the cramping came I slowed down the rotation of my pedaling. I don’t feel like I got a very good workout on the bike as a result. I probably didn’t even do 10 miles last night. It was pretty disappointing considering I have my sights set on training for 40 miles next month! 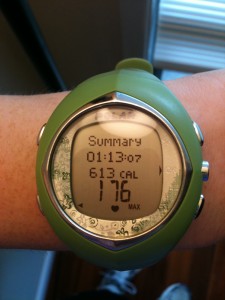 Despite the Charlie Horses I burned a nice amount in the hour. Even when I was running a lot I never had Charlie Horses. I am totally baffled by this phenomenon. I finished up with some stretching and then Michael’s old roommate, Shoe, stopped by. He hung out for a bit and it was really nice to catch up with him. While we were all chatting I was fixing dinner. Check back this afternoon for the amazing recipe! I love this new recipe I tried. So tasty!

QUESTION: What the heck happened with my calves???

As I drove home from work Tuesday night, mentally preparing myself for my home workout, I whined a little bit about having to get on the bike trainer. After Sunday’s gorgeous ride it was hard to imagine riding in my living room. I got changed, had my snack and set up the living room when Michael walked in the door and said, “Let’s go for a bike ride!” 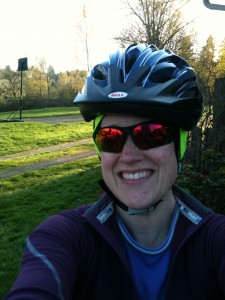 “Okay!” YAY! No bike trainer! He had an hour-long loop we could do together and since it was such a nice, warm day in Portland it was hard not to take advantage of that. 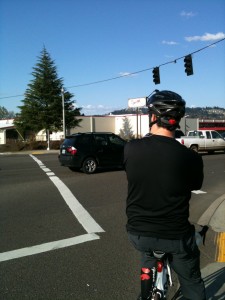 Confession: I’m a nervous bike rider when it comes to riding on the road. I’m not used to riding with traffic, it makes me super nervous and I’d much prefer a rural road or bike trail. When we were training for Reach the Beach last year we rode around Portland a lot. I got more comfortable with road riding but since it’s been so long since we rode around the city I was nervous last night. 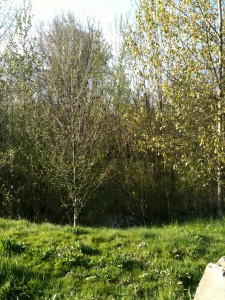 PLUS: it was rush hour. We left our house at 5:30pm and headed out. We had to cross a busy highway and ride on some neighborhood streets that don’t have bike lanes. There was a funky 6 way-intersection with so many weird turn lanes that we had to get in the actual lane in front of a car while we waited for the light to change. I was really anxious because we had to cross train tracks, immediately go up a steep hill and go fast enough that the cars weren’t annoyed behind us. Pressure! I made it up the hill, panting and out of breath, and then we were in bike lanes again. 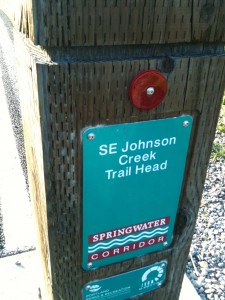 We rode through neighborhood streets and then connected to the Springwater Corridor. 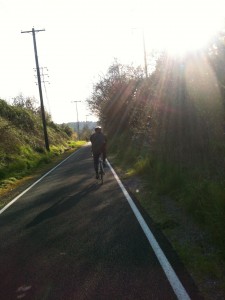 I was able to relax a bit once we were on the trail. Something that Portland does pretty well is create a lot of bike lanes throughout the city. It really is a good cycling city and somehow I need to get over my Nervous-Nelly ways so I can enjoy it! 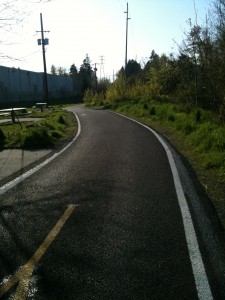 We rode down the trail into Sellwood and then left the Springwater and picked up another neighborhood bike lane. We rode through downtown Milwaukie. The sun was out and it was warm. In fact, I’d overdressed for my ride. It’s hard to gauge with biking though. 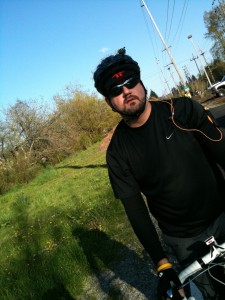 We made it home with the loop completed in 58 minutes! It was a great ride for after work and I am SO happy that the weather is cooperating and the sun is out much later in the evening. 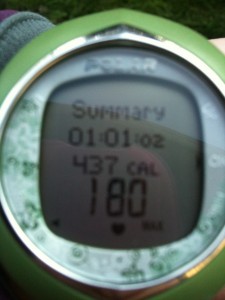 We made dinner together: spicy bratwursts with grilled zucchini. I added a little herbed goat cheese to the zucchini. 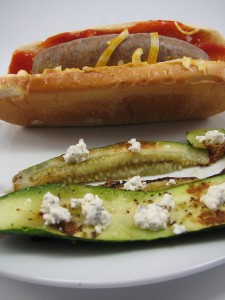 I had a sip of Michael’s beer. Only the good stuff in our house! (Check out Marie’s awesome letter to Miller Light. I agree 100%!) 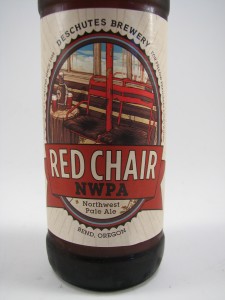 Dinner was quick and easy and the perfect thing for after a bike ride. I think the trick to getting over my nervousness is to just do it more. I noticed that I wasn’t sore on the bike too, I think riding on the trainer all winter has helped a LOT! Focusing on my core this winter too has kept me from experiencing back pain or neck pain on the bike too. 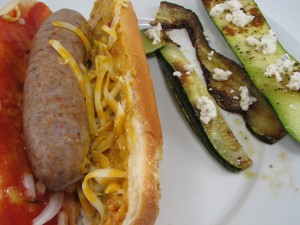 Since we went for a bike ride, I missed out on the #fitblog chat. I’d been looking forward to it because the questions sounded so interesting (will talk about them tomorrow).

QUESTION: What’s your favorite way to take advantage of the lighter evenings? And are you a nervous rider? How do you get over it?