The Quest for the Best Burger in Portland – Part 1

For a week now Michael has been trying to convince me to go to a restaurant he calls “Hans Gruber” — Gruner in downtown Portland. I wasn’t craving burgers until Tuesday after a great workout. I suggested we give it a try and continue our quest for the best burger in Portland. 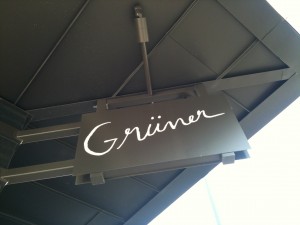 We went downtown and met up with one of Michael’s friends, Traver, for dinner. Michael got a glass of the Upright Engelberg Pilsener (OR) beer. 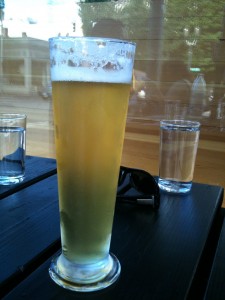 And I got a glass of the Grüner Veltliner (Stadt Krems, Kamptal, AT 2009) –white wine. It was a crisp, tangy wine that wasn’t too sweet and went perfectly with the hot summer weather. We were sitting outside in the sun and it was a gorgeous Portland day–80+ degrees! 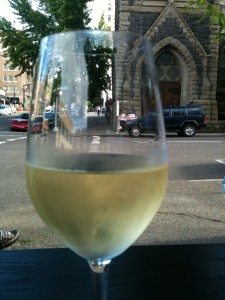 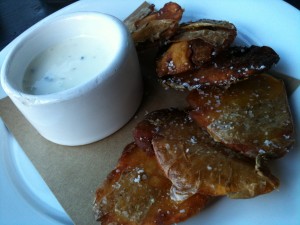 They were salty and good, and there weren’t enough for three people! I ate two. The burgers arrived. We all ordered the same thing: hambürger with smoky bacon on a potato bun with fontina cheese, b&b pickles, pickled red onions, aïoli, arugula & house-made ketchup: 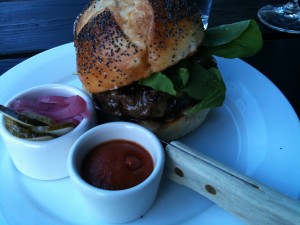 The burger was good. NOT the best burger in Portland but tasty. The bun was the best part of the burger, hands down. The burger didn’t need the bacon, it got kind of lost in the other flavors. The cheese was mild, the homemade ketchup had the consistency of tomato paste and I tasted curry. 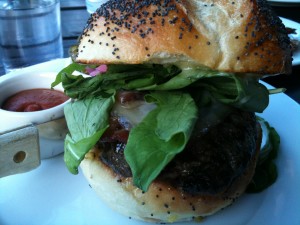 The burger itself was good–meaty tasting–but not incredibly flavorful otherwise (spice wise). It was good but very greasy and messy to eat. 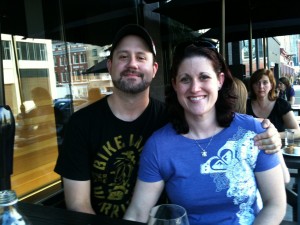 It was so nice being able to sit outside and enjoy dinner in the sun! They brought our bill in a book completely in German, which I thought was a cool touch. 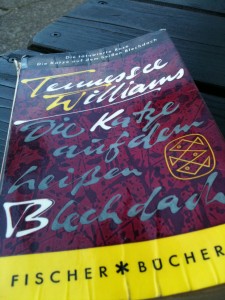 After dinner we decided to go for a walk through the Pearl District and find some dessert. It was a really nice stroll after a heavy dinner. It was the perfect night for a walk. 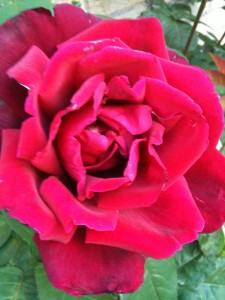 We ended up at Cupcake Jones. I was tempted by all the amazing looking cupcakes! I was good though. 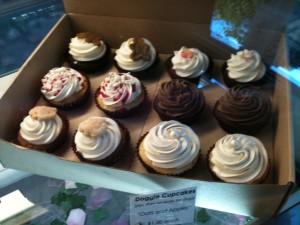 We each got one mini cupcake. Michael got the chocolate, Traver got a white chocolate with cranberry and I got the Pumpkin Spice. 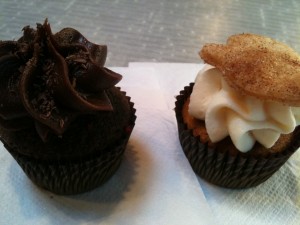 It was so good! The mini cupcake was the perfect amount. I particularly liked the tiny sugar cookie on top of my cupcake too. 😉

We continued walking deeper into the Pearl District and ended up at Jamison Park. I’d never seen the fountains there in the park, so it was a nice treat! 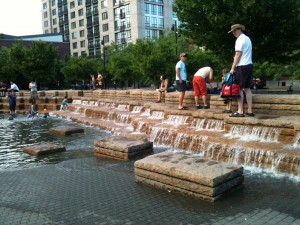 There were tons of kids playing in the fountain. It would be a nice place to relax and read in the summertime! 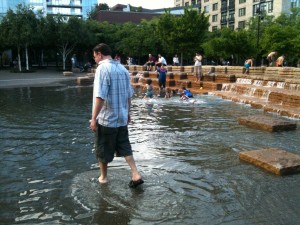 Bottom line on The Quest: Still have not discovered the BEST burger in Portland. So far I think the ranking is as follows: 1) Slow Bar, 2) Foster Burger, 3) Gruner, 4) Five Guys.

QUESTION: Do you ever walk around your city like a tourist?