Yes, I was disappointed that I didn’t see a change in the scale after a week of denying myself things I love (chocolate, fruit, bread). I don’t feel angry or upset that I didn’t lose weight. I suppose I feel more vindicated in my belief that fad diets just don’t work and counting calories works for ME. That being said, I agreed to  continue “The Diet” for one more week. I want Michael to feel supported in his efforts to lose weight and he’s pretty stoked having seen a 5 pound loss.

I think this week we have a much better Meal Plan worked out so that I won’t be so miserable–or burned out on eating the same foods. First, I’m going to make a 13 Bean Soup for us to alternate for lunches. The plan LAST WEEK had been to make Lentil Soup to take for lunches when we got sick of salads. I never had the time to make the soup so we were both burned out by mid-week on eating salads every day.

The plan will be modified in one area: I am going back to drinking coffee at work with my flavored creamer. I really don’t care if the 5 grams of Sugar/Carbs end up effecting the scale next week because I want my one cup of coffee a day. I tried going coffee-free last week and just felt lethargic. Drinking tea did nothing for me. It was a strange phenomenon because I went coffee-free for a whole year last year and went through no withdrawals and had no side effects. I never felt tired, I never craved coffee, I didn’t miss it. So why did it effect me SO MUCH last week??

I probably won’t post my food every day and every meal. There will be a few modifications for what we eat and I’ll describe those and show the new meals we try. But honestly I think you guys have a good idea of what type of food is eaten on this diet.

Sunday morning I slept in a bit and Michael and I had a huge breakfast (being back on The Diet). I let it digest a bit before I headed to the pool. Sunday’s swim was MUCH better! My arms were SORE from weight lifting on Saturday but they weren’t FATIGUED like they were on Friday. I had energy, I was fast, I felt strong and everything was a-okay in the pool. The only downside? No matter how hard or fast I swam, I could not get my heart rate up for the life of me. I have no idea why my heart rate was staying so low but as a result, I did not burn much in the calorie department. 🙁 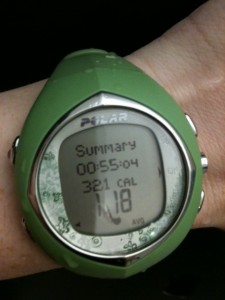 I saw a guy in the pool who was really struggling with his swimming. He had a good body so I could tell he worked out a lot, but maybe swimming wasn’t his normal exercise? I really wanted to help him and give him some pointers to hopefully make it easier on him but I didn’t. I never know if comments or suggestions would be welcomed by people, so I usually keep quiet. First, his head wasn’t aligned right. He was swimming the Front Crawl/Freestyle. His chin was almost touching his chest. I could not figure out why he held his head that way because it made his whole body out of alignment. Next, because his head was too low, his arms weren’t stroking right. Not only that he didn’t do the full stroke. He stopped just under the water instead of rotating all the way down through the water. A trick I learned: you thumbs should brush the outside of your thighs with each stroke. That means you are doing it right. When your arms aren’t doing the full motion, you do more damage than good and fatigue very quickly. Most of swimming is in the upper body so it’s VERY important to get that part right. Lastly, his legs were flailing around under the water. Scissor kick! Don’t just kick from the knees. Not only will it not work right and slow you down, you’re likely to hurt your hips. 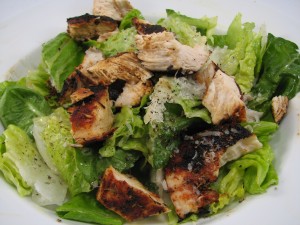 Hearts of Romaine lettuce, homemade Caesar dressing, NO croutons, freshly grated Parmesan and pepper. Topped with Blackened chicken. Delicious! I love this salad. This is my new favorite salad, the second being the Cobb Salad I had last week. Michael blackened the chicken breasts in the skillet with his homemade concoction, then he baked the chicken in the oven until it reached the proper temperature. It’s absolutely perfect: not dry at all! So tasty.

I marinaded the lamb in soy sauce, red wine, a splash of teriyaki, minced garlic, freshly chopped basil, sea salt, and pepper. The recipe I found also called for fresh mint–which I didn’t have, so I skipped that. 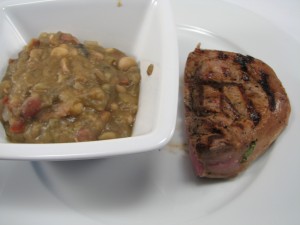 Dinner was brown and not appetizing looking at all, I know. But it was tasty. The bean soup was fantastic and I’m really happy how it turned out! The lamb steak was delicious too. It was very tender and tasty, a little on the fatty side but still great. I was kind of disappointed that we split the one lamb steak instead of each having one because my cut had the bone in it too–so less steak for me. Oh well. 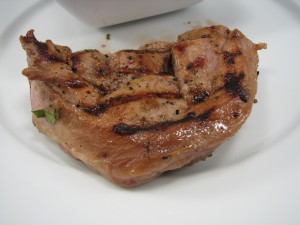 I’m happy we finally tried preparing lamb at home. I don’t know why we never did. But now we can do it again and try other recipes too.

QUESTION: What is your favorite recipe for preparing lamb? Would love some tips and ideas!

Tuesday after my workout I made a fantastic dinner. Michael and I eat a lot of salmon. I love it and could eat salmon several times a week. Since we like to eat fish so much I’ve been trying to compile a few fish recipes that we can rotate through. This recipe is one that is making that list. It’s a real winner! 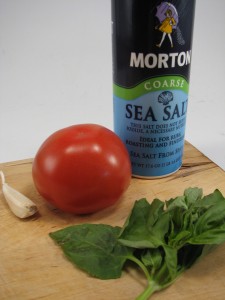 I modified the recipe a little bit. It called for grilling it over open-flame but neither of us wanted to go outside and use the grill so we just used the Le Crueset grill pan. 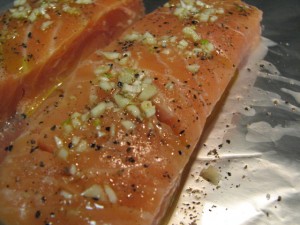 I seasoned the salmon with sea salt and fresh pepper. I minced the garlic and mixed it with olive oil, then spread it on the salmon. 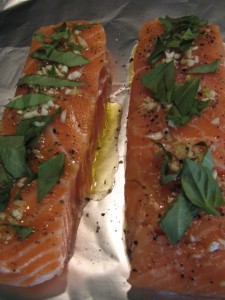 I chopped some fresh basil to it and then added the sliced tomatoes. 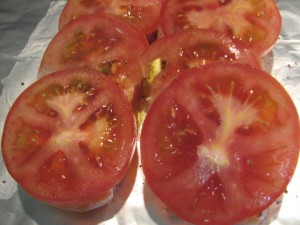 I wrapped it loosely in the foil and Michael took over cooking it in the skillet. I made us salads. 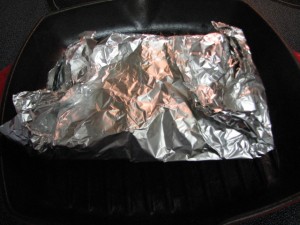 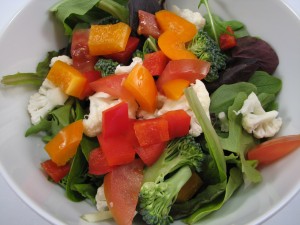 I did have a glass of chardonnay with dinner. I didn’t put wine on my “No-No List” in terms of breaking my candy habit. 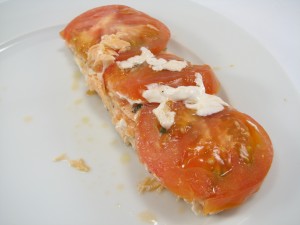 The Verdict: This recipe was fantastic. The combination of the garlic, tomato and basil was delicious on the salmon! I loved every bite and was kinda bummed when it was gone. 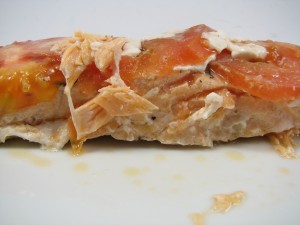 Next time I will add a little more minced garlic and maybe a little more basil. Trust me: make this dinner! It’s low-calorie and delicious.

After dinner I wanted dessert. I went all day Tuesday without really craving candy and was feeling pretty confident about my Sugar Detox. Then after my great workout and yummy dinner all I wanted was a glass of milk and some chocolate. I realized that it was more about HABIT. Dinner was over and I should have left the kitchen and done something else, but I was standing there wanting to eat more. I wasn’t hungry, really, so why would I continue to eat?

Then I asked Michael if he thought having a glass of chocolate milk was considering “cheating” on my Sugar Detox. At first he said he couldn’t answer that because I’d made my own rules and it was up to me. I badgered him until he answered 🙂 and he said YES it IS cheating.

No chocolate milk. I skipped it, had half a glass of plain milk and then got ready for bed. I stayed strong and didn’t eat candy. I will have a small glass of chocolate milk with protein powder on Saturday after my workout, though.

It’s now Wednesday and I’ve gone three days with no candy. I honestly don’t feel any different not eating candy. The only difference is that I feel a bit better about myself for NOT mindlessly eating candy at work. I guess I was expecting to have a physical reaction to stopping the candy habit. Hmm.

The only thing that might be a physical reaction: I’ve been feeling hungrier this week. I don’t know if I can attribute that to no candy though because I’ve also been trying to eat less calories.

QUESTION: Are you going to try this recipe? And if you’ve ever detoxed from sugar, did you have a physical reaction at all?