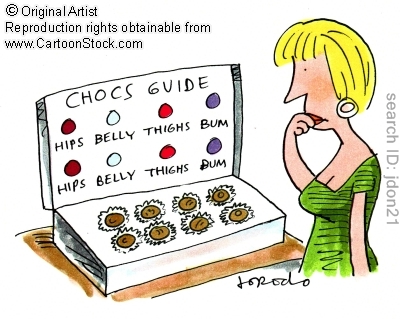 It seems like several people in the blog world are struggling with food temptations lately–I am definitely one of them.

Ashley left a comment on last week’s post about Dodging Landmines: “I felt really guilty because I ate the entire bun. Usually I only eat 1/2 of the bun at a restaurant. And then we went out for dinner and I had one of those “eff it!” moments where you go for exactly what you want (you should blog about that!) and got a bleu cheese burger on a white bun … and I did it again. We’re going out to dinner tonight, too. They’ll have to roll me to work on Monday.”

Oh yes…the “Eff it!” moment! I know it very well. In fact last week was hard for me because I realized that I was mindlessly snacking and not tracking my calories honestly. I vowed to be better, to be stronger. I did pretty well for a few days too!

Skinny Emmie confessed recently that she slipped into her old habits for a week. She said that she had a “Freedom Week” after finishing her half marathon she reverted back to her old eating ways:

“This week, my “freedom” from my new healthy lifestyle meant I reverted back to these old behaviors. It was an unconscious, robotic thing. I mindlessly went to restaurants and ate food that I know is unhealthy. I ate it without being aware of taste and how it made me feel, physically.”

I hope that Emily isn’t beating herself up too much because right after a big race your body is completely out of whack. After I ran Hood to Coast I had an insatiable hunger and ate everything in sight for about 10 days. I craved bizarre food, I felt like no matter how much I ate I wasn’t satisfied. The body is smart. It wants to be replenished after we do something dramatic like a Relay Race or Half Marathon!

Even Beth has confessed to slipping into old habits! It’s like an epidemic lately. Or maybe it’s contagious? What is going on?

This weekend I was at a friend’s house doing some baking. I was feeling kind of down, physically exhausted and I was really sore from the hard workout. I found myself having a really hard time resisting the temptation to just go hog-wild with the food. I wanted to just eat a gallon of that cookie dough. I had two bites of the cookie dough while we were baking and somehow I found the strength within me to stop sampling.

I told myself, “Stop. You were doing so good with trying to end the mindless nibbling.” I reminded myself that I was able to resist the Snack Monster for three days. I wanted to break the habit and I was doing so well!

I ate 2 cookies fresh out of the oven and then stopped. Did I want three more? YES!! I wanted 8 more cookies! The only thing that kept me from completely derailing was this thought: I worked so hard to lose the weight. I can’t go back to the old ways now.

I wish there was an easy answer for those moments when I want to say “Eff It!” and eat everything in sight.  I am happy to say that those “Eff it” moments are fewer and far between the longer I maintain my loss but I still slip. The time that this happens the most is with restaurant eating.

Last week was a lot of restaurant eating for me: I had happy hour with my cousin on Monday and dinner with a friend on Saturday. Then this week Michael and I are going out to dinner with his family for his birthday, Friday I have dinner plans with a friend and Saturday Michael and I are going out too. So much restaurant food! My restraint is weaker at a restaurant. I just have such a hard time making good choices when faced with an entire menu of fattening food.

I know how to eat “smart” in a restaurant: splitting entrees, ordering soup and salad instead of a big burger, eating half of my food and saving the rest for lunch the next day. It’s hard. Some days I just want to eat all of it and not be “good!”

One thing I have learned in my “eff it” moments where I do overindulge is that it’s NOT the end of the world. It CAN be reversed. It can be squashed as long as I don’t keep doing it. One slip up every once in awhile will not mean I gain back 100 pounds. This was a hard lesson to learn because I would beat myself up for days after a slip up. I’d feel defeated and depressed.

QUESTION: Do you give in to those “eff it! I’ll just keep eating” moments? Do you have a trick for getting over these urges?

Here is My Heart, Guard it Well