I was filled with a little bit of sadness this 4th of July. I realized that this time last year I went hiking– 9 miles on the 4th of July. A 9 mile hike. It was a glorious hike with perfect weather and I remember feeling so happy I did it. I didn’t know at the time that it might have been one of the last hikes I was going to go on for awhile. And a month later, I started to think about my knees and whether or not I had some issues going on. Funny how that premonition came to fruition only two months later.

This year instead of a 9 mile hike or a 40 mile bike ride like 2 years ago, Michael and I went for a fairly easy, very flat, short bike ride since that’s all that I am allowed to do at this point. It had been almost 2 weeks since my first experiment on the bike and I’d successfully run (only 1/2 a mile so far) and hadn’t had any knee pain of note as a result of that ride. So that was good news! Time to go out again. 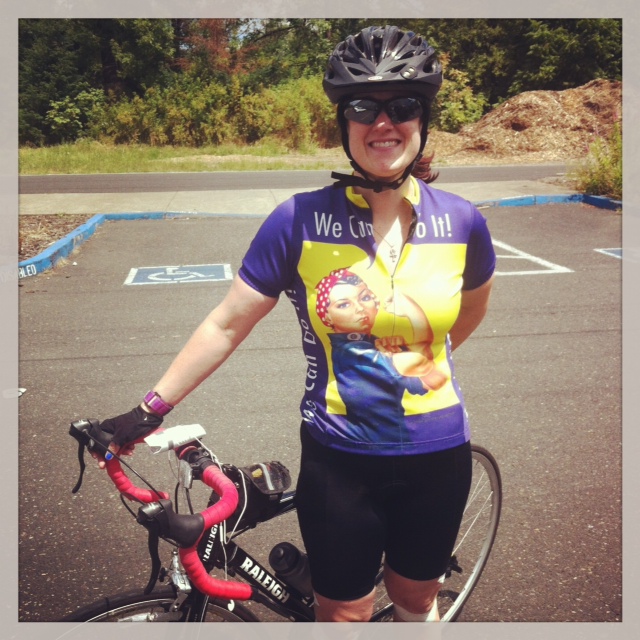 Or so that was the plan. Michael had a flat tire, so he changed it. Then it wouldn’t hold air and he changed it a few more times. He gave up, rightly frustrated, and I said I’d just go to the gym. No big deal. I got to the gym and did a short weights workout–upper body only–and he messaged me saying he got the bike to work. I came home early to go riding and when we got to the parking lot at Johnson Creek, he had another flat. He ended up using another bike instead and we got to ride but it was sure a pain in the ass to get going! 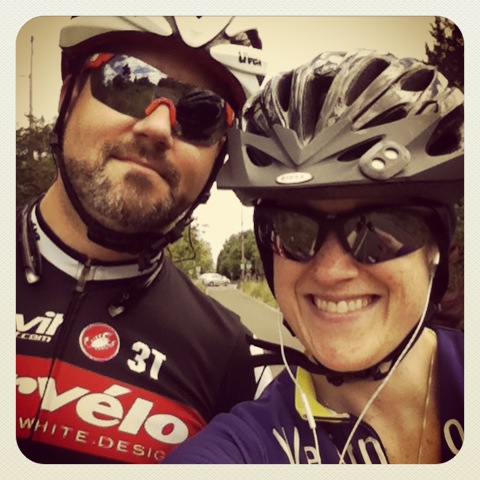 Once we got going it was good. We headed East on the Springwater and despite being a nice, sunny day and a holiday, the trails weren’t too busy. Maybe it was because we got a late start. At almost 6 miles my right knee started to feel a little irritated. It didn’t hurt but it didn’t feel great. I wasn’t sure what it was so we decided to turn around. The way back is slightly downhill and much easier so there were no issues. 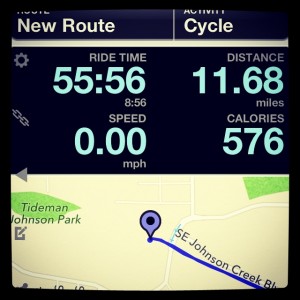 Woot! Almost 12 miles this time! Yay! I felt great the rest of the day and the knee issues didn’t come back. Here is the calorie burn for the weight session and the bike session: 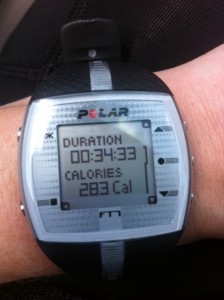 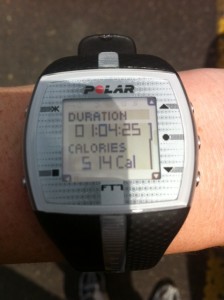 We had some friends coming over to BBQ and our street was having a block party so the rest of the afternoon was spent cooking. I made a Southwest Quinoa Salad that was fantastic!! I went off this recipe from My San Francisco Kitchen and kind of made it my own. I used red kidney beans instead of black, used a chili lime mixture of nuts that I got a Trader Joe’s instead of pistachios, and added red, yellow and orange peppers to it. LOVED IT.

I have no idea how she only got 2 servings out of this recipe because that’s about 3 or 4 in my house! But I tripled the recipe to make a ton for the party. 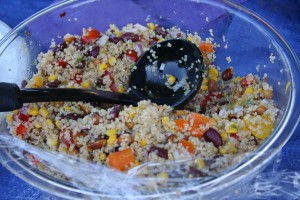 Everyone at the party loved the salad, even the ones not keen on quinoa! I loved it too and it was great as a leftover. I will most definitely make this recipe again–especially for potlucks. Michael grilled up bratwursts and hot dogs cooked in beer, onions and sauerkraut. They were great!

There was tons of food. Our friends brought a green salad made from their veggie garden, Michael made guacamole and I also made a bunch of cheesy kale chips (at the request of several neighbors days before the holiday. Because it was a block party, the neighbors offered us some of their goodies. There was chicken and veggie kabobs, lots of munchies, dips, mixed nuts, etc. There was just too much food and I oddly wasn’t as hungry as I thought I’d be after my two workouts.

I did, however, have a small piece of the oreo ice cream cake that our neighbors had. I mean come on, how could you resist this dessert? It’s been YEARS since I’ve had ice cream cake. Mmmm good. 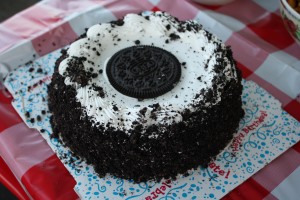 Our neighbor across the way put on a big fireworks show once night fell but Michael helped Hans with the kiddie fireworks that our friends brought along with them. They also had their 6 month old baby with them and he slept through the whole show! What a good baby! 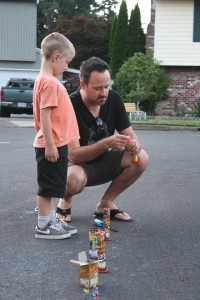 I was so glad our friends joined us this year. It was fun to entertain and just kick back and relax. I ate a little too much, drank a little too much and paid for it a tiny bit the next day. But it wasn’t too bad and Michael and I zipped up to Seattle for the weekend! More on that later; I’m still sifting through pictures. 🙂