Michael and I got home from work right before Valentine’s Day to find a bunch of goodies left for us on our kitchen counter! A big brown bag with tissue paper and then two small gift bags: 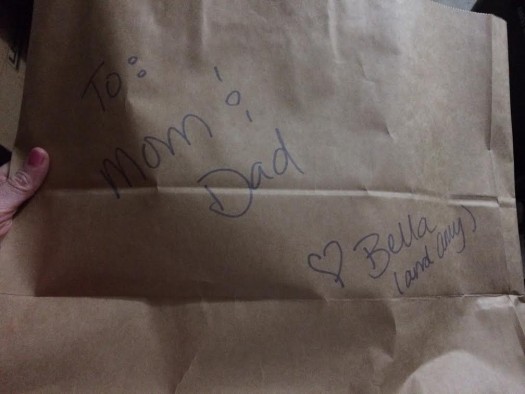 Our dog walker had made up some Valentine’s gifts for her clients! It was such a nice surprise. I opened it up and there were treats for the kitties (homemade catnip toys), liver treats for Bella, some tennis balls for Bella (her new favorite toy), some chocolate for us and some other goodies for the beasts! 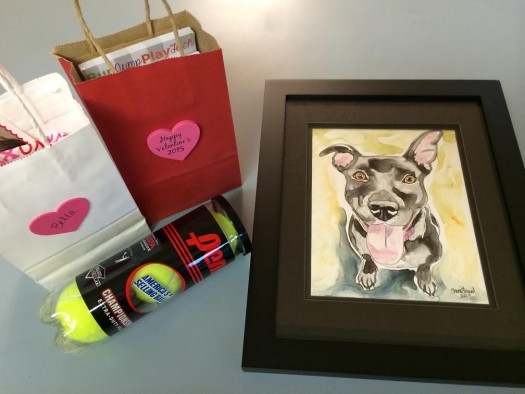 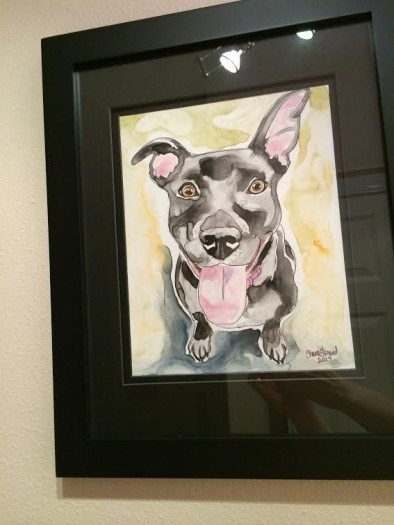 Plus there was this GORGEOUS watercolor painting of Bella! The painting was actually a belated wedding gift and it was a painting from a photo that Amy took of Bella on one of her visits. The painting is so incredible! I had a huge smile on my face all night and I absolutely LOVED it. 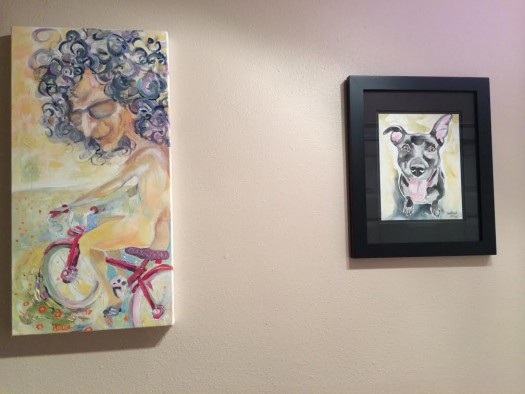 I immediately hung the Bella portrait next to the other amazing art we got as a wedding gift from a friend. We are slowly decorating our house with art work but it’s definitely unfinished. Most of it will be taken down at some point when we finish the remodel (especially in the kitchen). Once the remodel is done I’ll figure out a better way to display all our amazing stuff.

Bella also got a homemade bandanna from Amy. How cute is my little Love Bug? 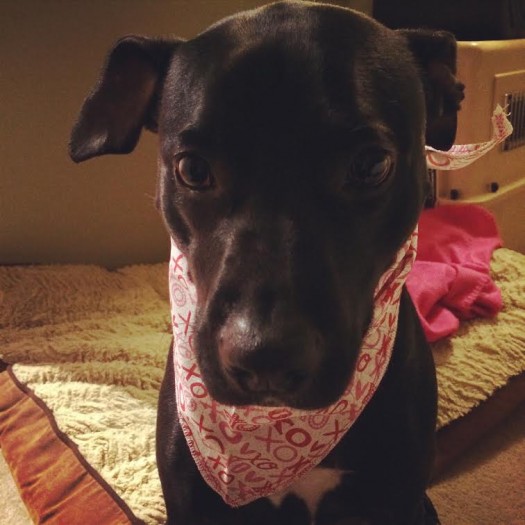 Haha, she doesn’t look too amused but she is really good at holding still while mama takes photos. She’s used to it (my Instagram is basically just animal pictures). Anyways. After we unwrapped our Valentine’s gifts, we got dressed for a run. This time we took Bella! 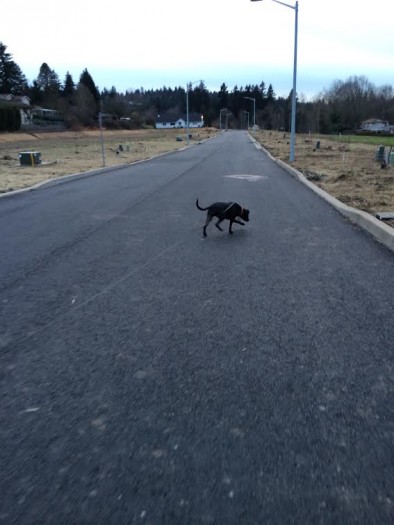 Since we had Bella with us on our run, we couldn’t go to the neighborhood school track. Instead we did the nearby street near our house that is currently empty. They are building a bunch of houses there, apparently, but we haven’t seen any construction happening in months so who knows. It’s about a mile long loop and it’s been our new walking loop with Bella for awhile now. It’s nice because there’s rarely anyone over there. 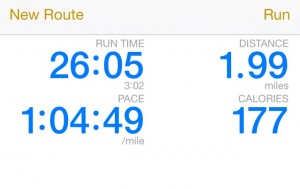 We didn’t run for a long time for a number of reasons. 1) It gets dark earlier still. 2) Bella is “out of practice” running and I didn’t want her to do too much on the pavement too soon and hurt her paws. 3) Michael is new to running so he doesn’t need to injure himself. 4) My body is used to treadmill running so I need to ease back into street running. 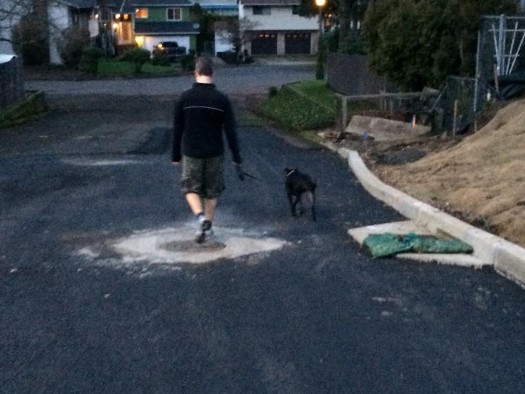 We did the neighborhood loop twice and then headed back to the house when it started to get darker. We hadn’t been out for a super long time so I wanted to get a little more of a workout in. I did a short kettle bell workout in our living room while I watched Downton Abbey. Nice combo, huh? 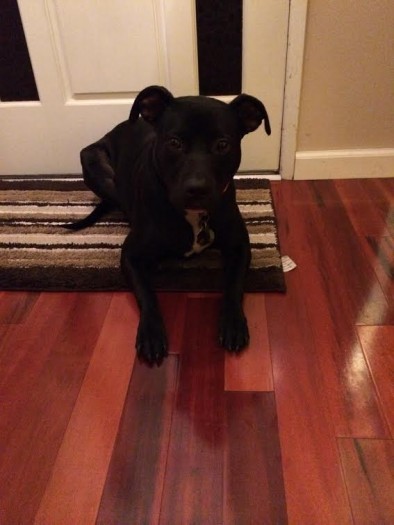 Bella sat on the rug by the door and watched me swing kettle bells for 15 minutes, I did some ab work and then finished up with some stretches. 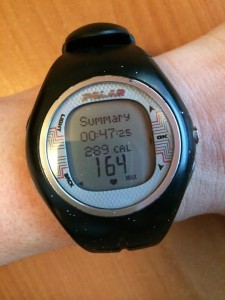 The calories were a little low for me but it was better then going to the gym and spending an hour on the hamster wheel. I got to be with Michael and Bella and get outside. It was nice.

To celebrate Michael and I went out Friday night (instead of Valentine’s Day) to Grain and Gristle in NE Portland. I’d never heard of it before but it came up on a search for new restaurants and the reviews were really good so I wanted to try it. We got there around 6pm and the place was already packed. The wait for a table wasn’t too long, though. We got an intimate table and ordered drinks. Michael got an Old Fashioned and thought it was really good. I had a sip and it was tasty (and I’m not a whiskey fan). 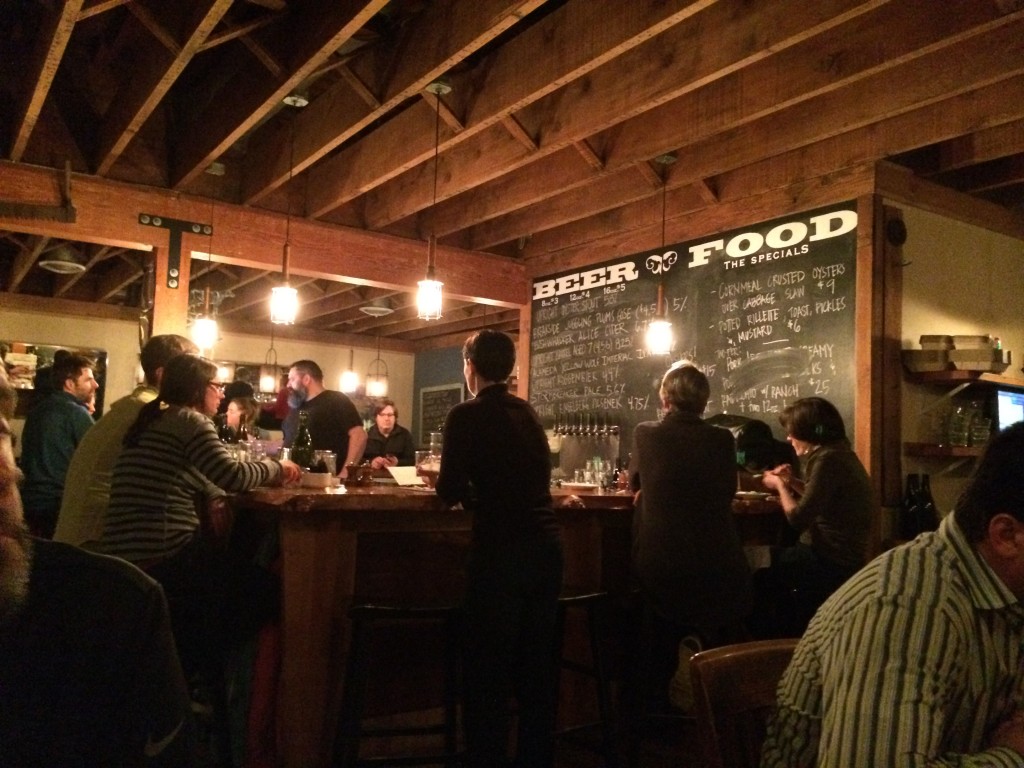 I ended up getting a Bloody Mary and it was okay. Not the best one I’ve ever had (and I’ve had some really good ones before). They had a special  “for two” that sounded really good (pork with polenta and braised leeks) and we almost got that. I LOVE polenta and it just sounded so tasty. Plus it was a good deal–lots of food and 2 beers. 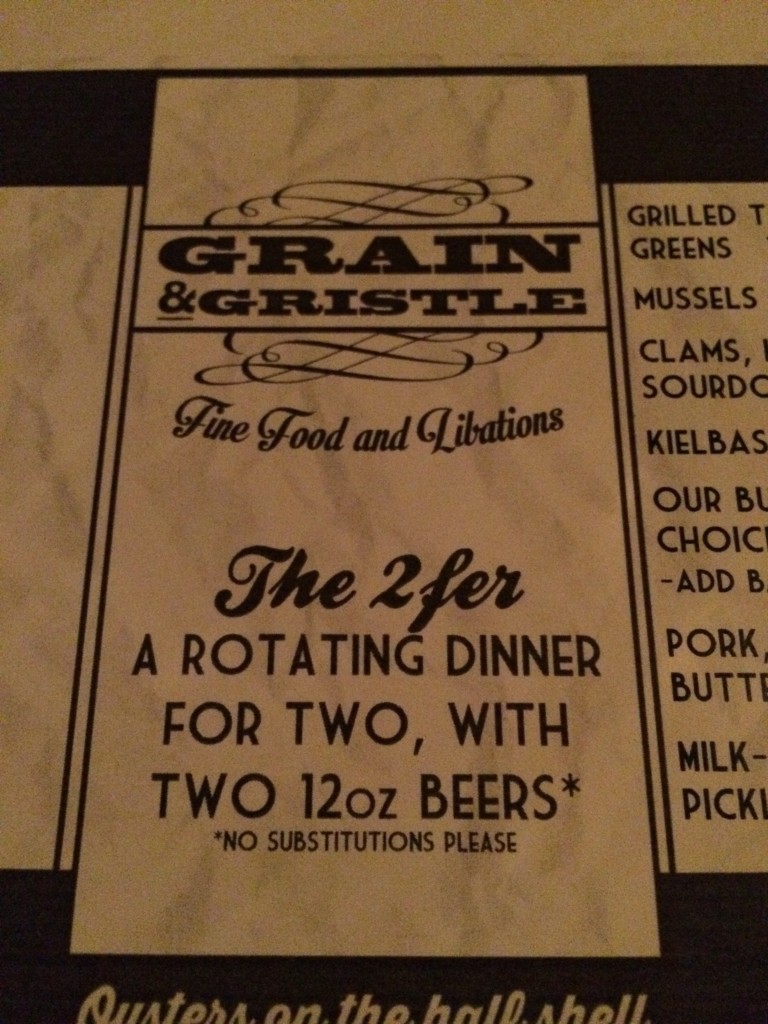 In the end we both ordered the burgers because they sounded so great. And boy were they! They were so good we both said the burger makes our top 5 list for Portland burgers. It came with homemade pickles, aioli sauce, bacon. I got the salad with it and Michael got onion rings, which were the skinny shoe-string style. They were so great. Man, the food was spectacular! I got the Brussels Sprouts as a side and loved them. They were charred and just perfect. Still thinking about that meal, days later…yum! 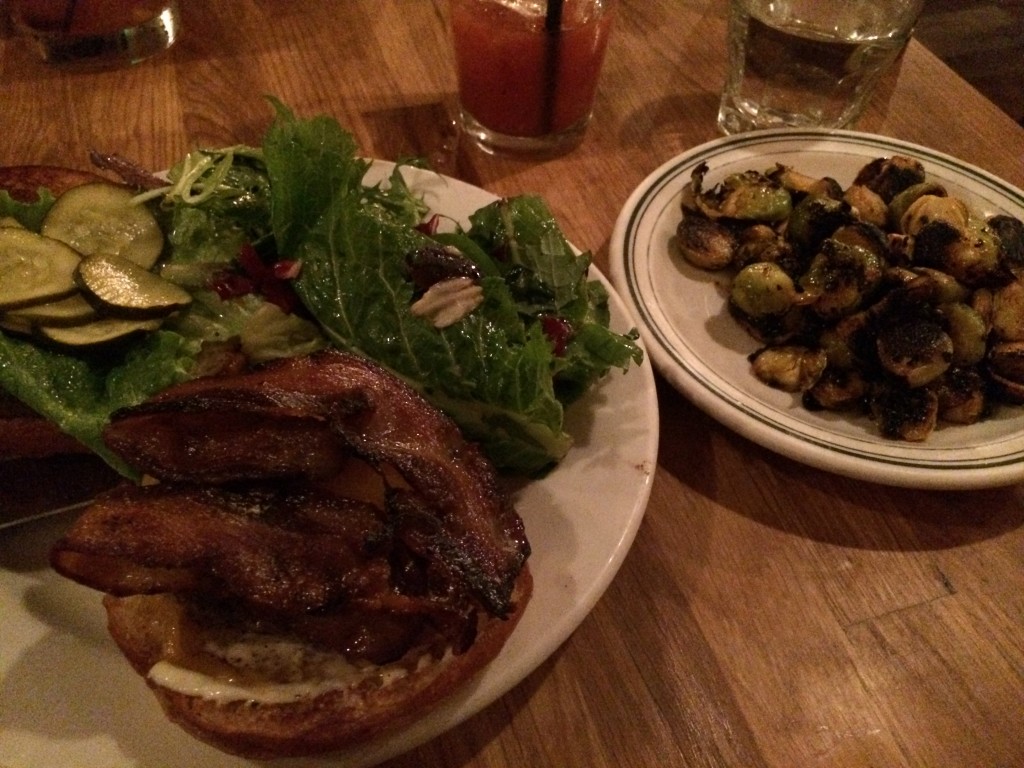 My only complaint about the place was that the service was SO SLOW. It took forever to get our drinks. We waited for a really long time for the food. I get that it was a Friday night and it was crowded but it was abnormally slow compared to other restaurants we’ve been to. The food came out just as I was getting to the “this is making me grumpy, I am not a fan of this restaurant” phase. And of course, once the food arrived and it was so delicious, those irritated thoughts disappeared.

After dinner we ended up going to IKEA to pick of a part we’d ordered for the kitchen and pick up a few other things we needed (I needed some soap bottles, a lamp for the spare bedroom, a picture frame). The restaurant was so close to IKEA we figured, why not? And it wasn’t insanely crowded either so that was nice. Michael ended up getting a nightstand like the one we got for me a few weeks ago. There might have been some shenanigans going on in IKEA with the carts… 😉 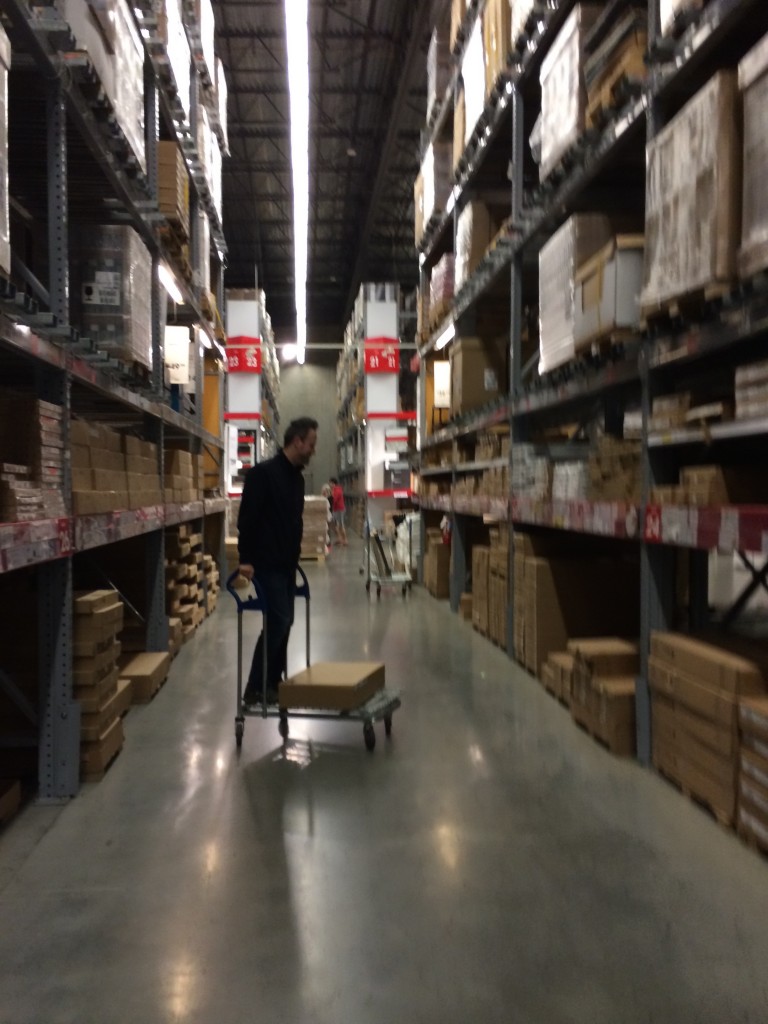 On Valentine’s Day we decided to go for a hike and invited some friends to come along. Sadly one of the kids got sick so our friend had to stay home with them but Michael’s friend Dave was still able to come and he brought his adorable 2 year old son. We went over to Saltzman Road again because we figured it would be a good hike with a 2 year old. Dave ended up putting his son in a backpack though, but either way a little one could have done it. 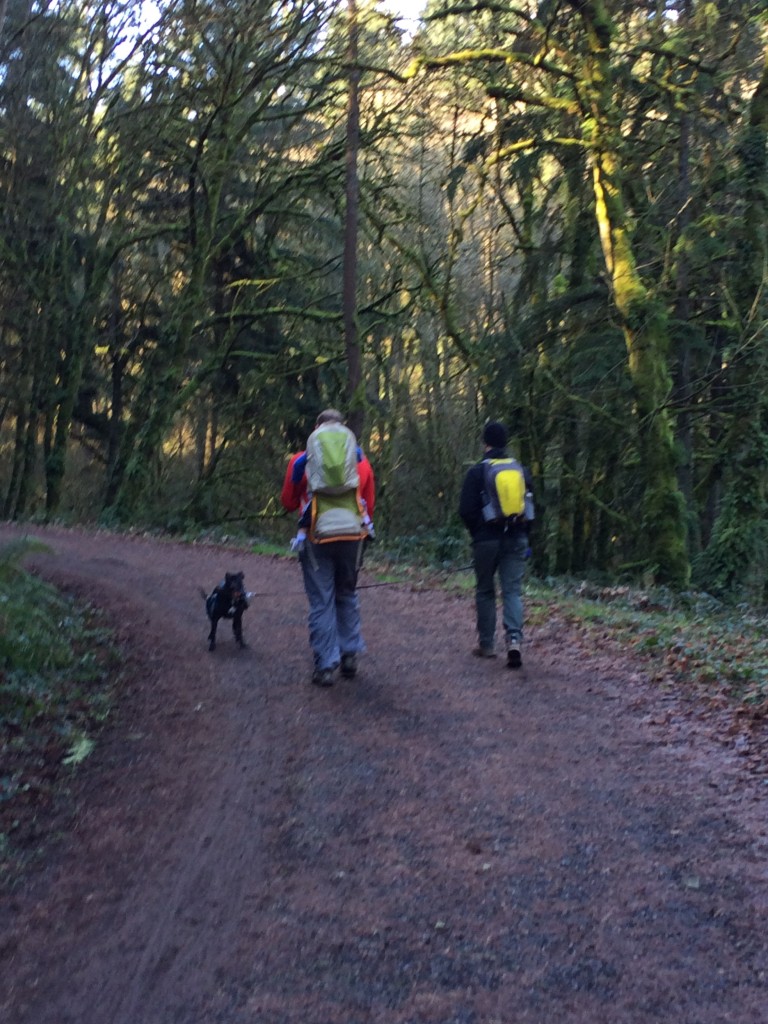 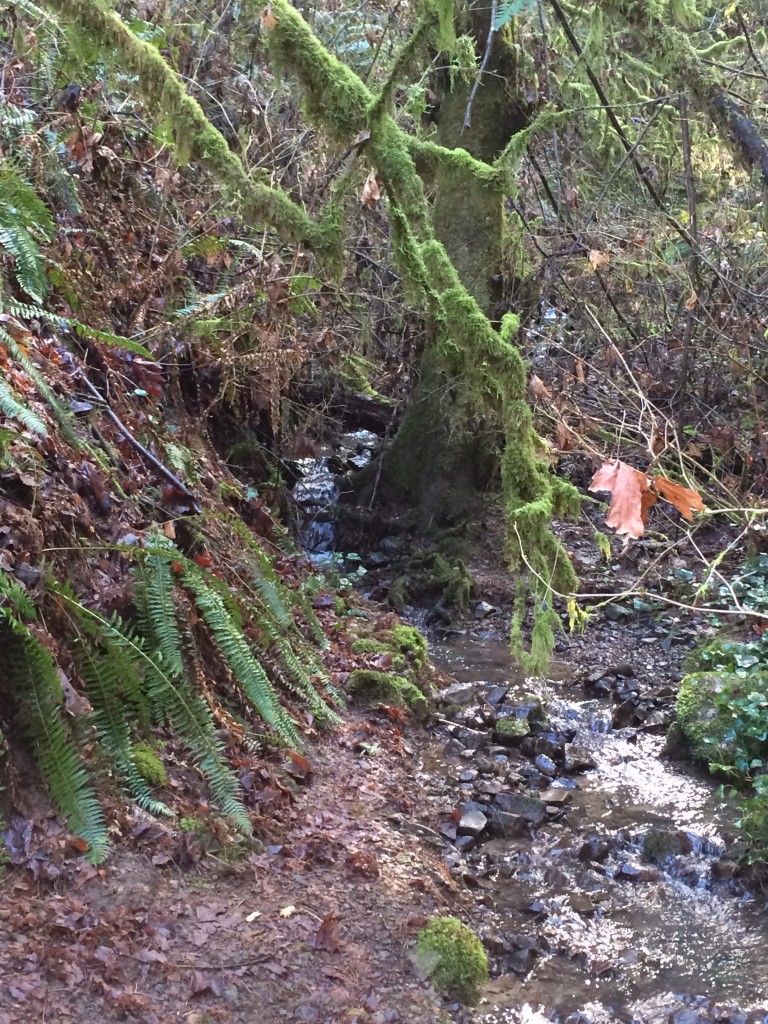 It was such a nice day out! Sunny and mid-60’s. So we ended up doing a little more mileage than planned 5.22 miles roundtrip! It was just such a nice day out, the trail wasn’t too crowded and we were all feeling pretty good. The trail is a gradual grade uphill but it’s never TOO strenuous that you feel like your heart is going to pound out of your chest. Hopefully the whole family can join us next time! 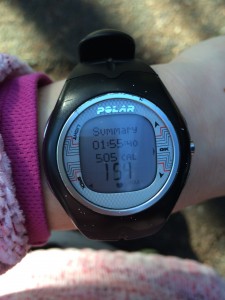 So 5.22 miles hiked, 505 calories burned in just under 2 hours. We were all tired out I think. Bella slept on the way home. We gave her a bath, Michael put together his new IKEA nightstand and I spent the rest of the day doing chores and errands. It was a nice little holiday!