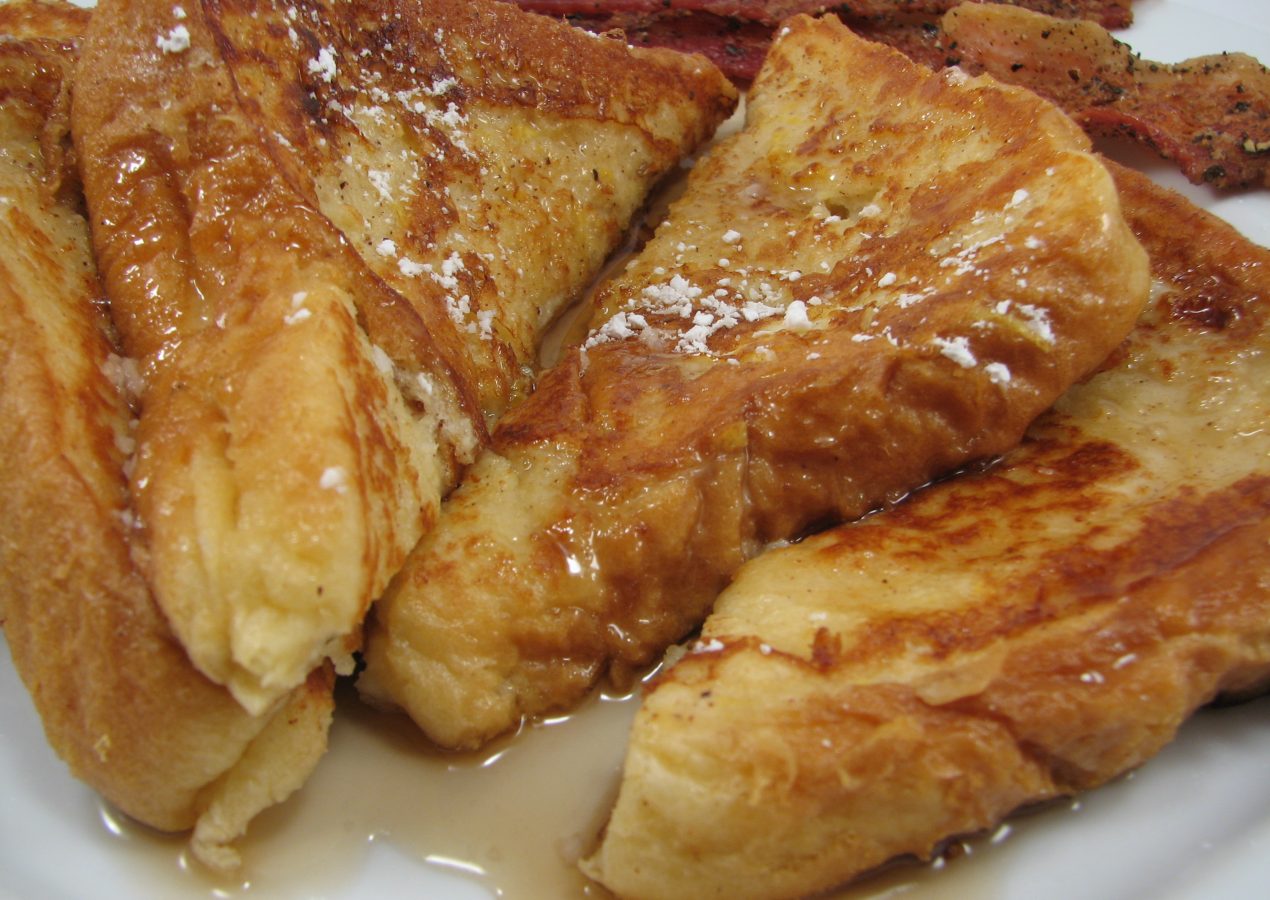 My love affair with French Toast has been lifelong. It’s hands down the best breakfast in my opinion. As a kid we went out to breakfast as a family on weekends (my parents still do it to this day). We had a few favorite breakfast joints near the house that we’d rotate through each weekend. My favorite breakfast place we went to was in downtown Edmonds, just blocks away from the ferry.

I would always order French toast. That was my favorite breakfast. The little pad of butter slowly melting as it’s nestled between the slices of toast…the warm syrup…the powdered sugar…heavenly!

I stopped eating French toast for a really long time. I just couldn’t justify the calories. I slowly started eating it again when I realized that French Toast wasn’t that bad. When Michael and I were first dating I got snowed in at his house one weekend and the snow just kept coming.

“Snowfall for Dec. 2008 totaled 18.9 inches. December also marked the second-snowiest month in Portland’s recorded history, bested only by the remarkable 41 inches of snow that fell on the Rose City in January, 1950.”

I’d intended on only spending the night at Michael’s house and woke up to 18 inches that prevented me from making it home for 5 days! I think that was a turning point in our relationship, too, because we were forced to spend 5 days in close quarters without being able to leave. And with his roommate, Shoe. And we all survived. 🙂

Luckily we were within hiking distance of a nearby Safeway.  We trekked in the snow to get the ingredients. Michael and I started making this recipe for French Toast and we’ve never done it another way since. Of course it’s a Martha recipe.

The secret that makes this recipe so amazing is the orange juice and lemon zest. Do not leave that out because it’s pretty fantastic.

I’ve been craving this French toast for a few weeks. It’s been over a year since we’ve made it. I think the last time we made it was for my parents for breakfast when they visited last summer. It was time to make it.

We mixed the wet ingredients in a jug with a lid and then shake it up to mix it.  I put the bread slices into a dish and then pour the liquid into the dish for the bread to soak it up.

I flip the bread a few times until it’s all the way soaked and then Michael cooked them in the skillet until they were golden brown. Michael also made some bacon to go with out French toast.

I sprinkled a little bit of powdered sugar on top of the toast. I heated the maple syrup in the microwave and dinner was served!

Using the right bread makes all the difference. I grabbed Texas Toast this time because it was thicker and the store I went to didn’t have Brioche (but that is preferred). This recipe is pretty fantastic and don’t get discouraged by how involved it might be.  It’s more involved than a simple French toast recipe but this one is so much better than anything I’ve ever had. It’s much better than even restaurant French toast!

What makes this recipe so amazing is the orange juice and lemon zest. Trust me. You don’t want to leave those ingredients out. Enjoy!

A serving size is one slice of bread and runs about 300 calories. I substituted the Splenda blend so that might cut down the calories by 25-50 or so. Breakfast for dinner! Yay!

QUESTION: What’s your favorite breakfast? Do you ever have breakfast for dinner?

How to Lose Weight – Week Two