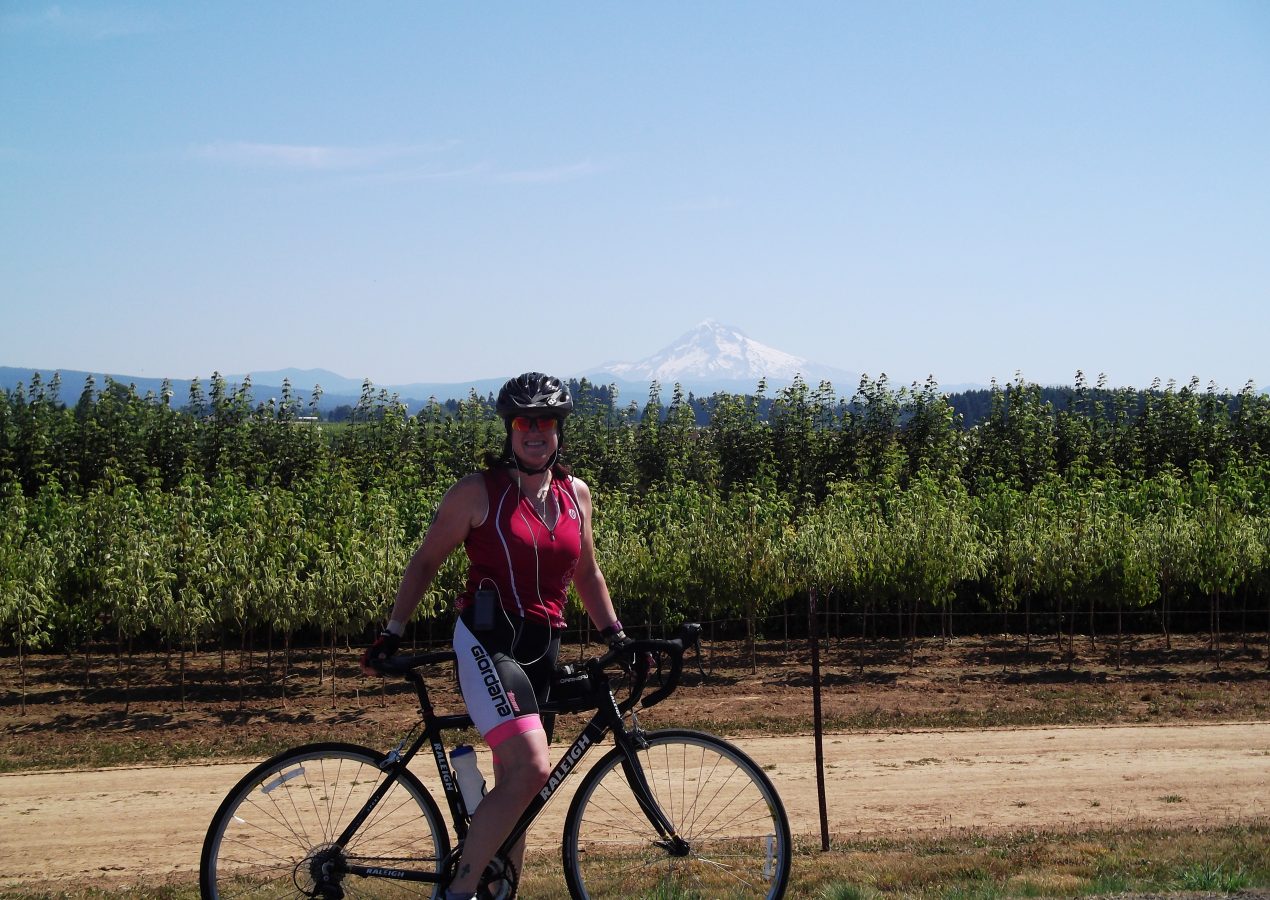 You can read Part One Here.

We left the Blue Lake Rest Stop and headed back to Marine Drive. I have no idea where we were. Michael’s cycling computer popped off his bike and fell off. We stopped so he could grab the computer and put it back on. Then a little bit later he hit a hole in the road and his water bottle shot OUT of the case, flew into the air and rolled into the street. It was kind of scary because there were riders behind us who were trying not to hit it. One cyclist stopped and grabbed it for Michael, which was very thoughtful. Weird flukes!

We biked into downtown Troutdale– totally quaint and cute but I didn’t stop for photos. We winded through to the Historic Columbia River Highway. It’s a familiar area (my aunt lives over there–in fact we bike right by her house!) but we’ve only biked over there once.

We had to bike across a very narrow bridge crossing the Sandy River–the bike path too narrow for anyone to really get by. There were some people walking across it so I waited on the other side before trying to squeeze through on the bike. The Sandy River looked crisp and inviting. It was starting to get pretty warm.

I used to spend summers in the Sandy River. Borrowing my aunt’s inner-tubes and leisurely floating down the river in the sunshine…perfect way to spend a summer. We biked along the W Historic Columbia River Highway for about 2 miles I think. It was much cooler along the river and it was shaded for most of it. This might have been my favorite part of the ride.

The course split. The 100 Mile Route riders continued on and we turned right across the Sandy River Bridge.

I stopped to take photos and drink some water. I knew what was on the other side of that bridge = THE FIRST BIG HILL. The challenge that had caused me anxiety all week. A few weeks ago Michael and I had driven this part of the course to see the hills before we signed up. I was nervous about this hill. It was a long, steady climb that looked very challenging.

The above photo was taken at the base of the winding hill. Michael had gone on ahead because he’s more conditioned for hills than I am. He promised to wait for me at the top. The photo doesn’t do justice to the hill because it bends around that corner and THAT’S where the hill starts. It’s along a cliff over the Sandy River–with a very small, low brick railing that really doesn’t protect you from falling to your death below (did I mention I dislike heights too?). I shifted my gears (thankfully Michael gave me a lesson the day before on how to use my climbing gears–the ones that I tried to use at Reach the Beach and ended up breaking my bike).

I turned the corner and saw the hill. I also saw a girl in front of me just give up and get off her bike. She wasn’t going to make it up that hill so she decided to just walk it. I groaned and put my head down, determined not to walk. I was breathing hard and my legs were working even harder but I was not walking.

I got to the top and had a huge smile plastered on my face. I had done it! I’d faced the hill that had freaked me out for weeks and I did it. My heart rate went from the high 170’s to 136 in a matter of seconds. I stopped at the top to get some photos. The girl who was walking her bike had a friend waiting for her at the top. I saw them a few times on the course.

I got a break for a bit and went downhill. We wound through the country roads, passed Christmas Tree farms, vineyards and farms. It was a scenic area and I really enjoyed this part. And it wasn’t uphill the entire time.

The next challenge came up quicker than I was expecting it. I wasn’t quite ready for it either– it was the very short but VERY STEEP hill near SE Oxbow Drive. Oh my god, when we saw this hill on our practice run it was the second part of the ride that caused me anxiety. It was short and steep, the kind of hill that looks like a wall–AND it turns around a corner. I shifted my gears and just went for it. Left and right I saw cyclists giving up and walking their bikes up the hill.

They were dropping like flies. It wasn’t very encouraging to see and I forced myself to look down and not at the other cyclists who couldn’t make it up the hill. I shifted to the max and PUSHED it. I was panting and breathing so hard I thought I’d pass out. I stood up a few times as I pedaled to see if I could climb the hill easier that way and then sat back down on the saddle. I was halfway up the hill and a guy on a very nice bike passed me, struggling just as hard as I was and seeing him go on his bike gave me renewed energy. He hadn’t given up either.

I was almost to the top of the hill and my legs were screaming at me. I was sort of rocking back and forth in the saddle to get more momentum and finally made it to the top. I pedaled a few more yards and then pulled over to the side to take pictures and catch my breath. I had done it! I had faced both challenges and rocked them! My entire body felt like Jell-O. I don’t know if it was nerves or adrenaline but I was shaking as I was trying to stand still and take photos.

I looked back and saw more and more people walking their bikes. I felt so good that I hadn’t had to walk!

I biked on and eventually found Michael down the road waiting for me in the shade.

We only had a few more miles to bike to get to the next Rest Stop. It was a gorgeous part of the ride! Gentle rolling hills through farm lands, with Mount Hood in the distance.

Despite the hellacious hills, this was my favorite leg of the race. It was jus so pretty!

The Rest Stop at West Orient School was the lunch stop. They had lots of fruit, Pepperidge Farm cookies, salty tortilla chips and Dave’s Killer Bread for sandwiches. And ICE! I filled my water bottles with ice and the cold water was fantastic!

I had half a sandwich with salami, a slice of cheese, mayo and mustard. It was like the best sandwich ever. 🙂 One of the great things about The Portland Century: the food at the Rest Stops were fantastic. I felt like I was eating the WHOLE TIME–which was weird. I do think that doing this helped me a lot, though, because I never crashed. I never felt hungry or irritable or exhausted. In fact, I brought several GUs to have along the ride and never ate any of them because the food at the Rest Stops were good enough to get me through.

We left the Rest Stop–I hadn’t had to pee since the second rest stop. I think I was sweating it all out of me. I was sucking down water and water with electrolytes like crazy. We biked through countryside in the middle of nowhere (I felt so lost) and Michael was far ahead of me. There were several parts of the Century where I was riding along by myself. I’m not sure if the Century is less popular or if the riders had started earlier than us? But it was kind of strange (and kind of nice) to be biking along country roads alone. It was nothing compared to Reach the Beach where we were always biking with groups of people.

We biked through Boring, Oregon and turned onto a back road. I saw a humongous hill ahead of us. I’d caught up to Michael and another group of cyclists. I had no idea where we were going and when I saw that hill straight ahead I chanted, “Please turn right, please turn right!” The cyclists ahead of us did turn right! Thank the goddess! No more monster hills!

We winded through another rolling country road, through trees and next to a cool creek, and then I knew where we were! The Springwater Trail was right ahead!

Stay tuned for the Conclusion….

QUESTION: How do you stay positive in challenging situations?

Are You Bored with Your Workout?