“I want to quit my job, drop out of society and wear live animals as hats.”‘

Thank you to my friend Jenny for that awesome quote. She has it on a fridge magnet and reminds herself of it when stress is overwhelming and she needs a laugh. That was how I felt last night. I had a very stressful commute which lead to me missing the spin class I wanted to go to. I did not want to do my normal workout routine. The idea of doing boring cardio or lifting weights sounded unbearable to me that evening and I was a frustrated mess that I missed the class.

Despite my frustration and road rage that got me stuck on the god-awful Ross Island Bridge, I made it to my gym to work out. Something was better than nothing. I went to put my heart rate monitor on and it was broken. Dead battery. I just got it back. I’ve used it twice and it’s dead. I was so upset. It was kind of the last straw. My frustration levels were through the roof.

I worked out on the elliptical anyways, trying not to cry from frustration. I tried to workout my frustration on the machine (which helped a little bit). But it was hard because I was also remembering the other thing that was upsetting me: my knees. 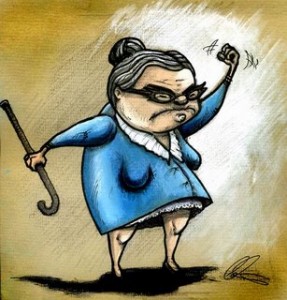 I have old lady knees apparently. I ran on the treadmill on Tuesday and was in pain ever since. Every time I walked my knees ached. BOTH knees. I am frustrated and depressed that I can’t run anymore. I miss it. I loved running. It made me feel alive. I am so sad that I can’t do it anymore. Period. Every time I do it lately I regret it for a good day or two. I am too young to be in pain when I walk. 🙁

Despite the awful evening, I went home and Michael comforted me a lot. He listened to me cry and vent about the things that were bothering me. He hugged me, told me things would get better and made me dinner. It helped. 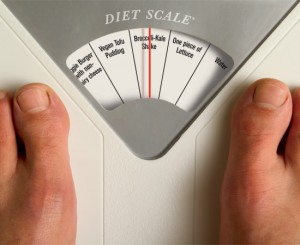 Then I weighed myself. Glutton for punishment? Yes, I think so. I’ve been feeling so good about my body lately. I feel strong. I like what I see in the mirror. My stomach is flatter than it’s ever been. My jeans are a bit loose. 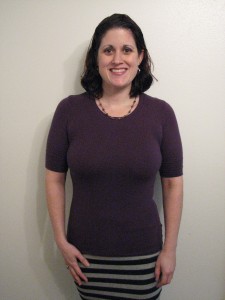 So how am I up 1.6 pounds? You stupid scale! Bringing me to tears. This is exactly why I stopped weighing myself this summer. That stupid machine effects my moods too much. I KNOW I haven’t gained 2 pounds. So why does the scale reflect that? Where are those two stinkin’ pounds in that photo above?

Michael said I’m looking better and fitter than I ever have. Then he said he was going to throw away the scale. He said he hates how that stupid scale makes me feel. I agree. But I’m not ready to throw it away. 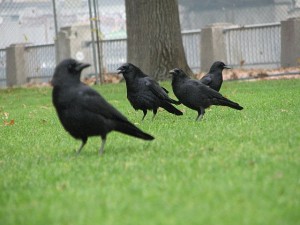 Either way, this whole week is for the birds.

QUESTION: Want to vent about something? Go for it!

That all faded away when I walked in the door from a really good swim to sweet words from Michael and a yummy dinner waiting for me, plus a nice Cabernet and the latest episodes of SNL. It’s been awhile since we had homemade pizza. Michael tried a NEW pizza dough and it was a success! 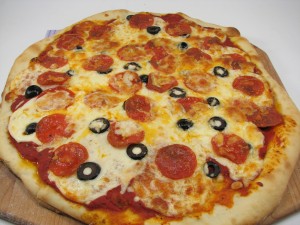 Did you see my post How to Rock Homemade Pizza? It’s a good beginner’s guide to making your own pizza. The last recipe we used was Homemade Pizza Dough. We used it for a long time, changed it a bit and tailored it to our liking. It was a decent recipe for awhile but the last few times we tried it it wasn’t working right. The dough was sticky and difficult to roll out. It didn’t hold the shape well. Michael was fed up with being frustrated with the dough. The other issue with the old recipe was that it made two servings. Which is good, right? We could freeze the other half of the dough for another time but EVERY time we tried to use that second dough it failed. It was too sticky, or it didn’t rise correctly. It was time to find something else.

We loved the new recipe! It was thick and chewy but still a tad crunchy. It was delicious and so much better than the last dough recipe. 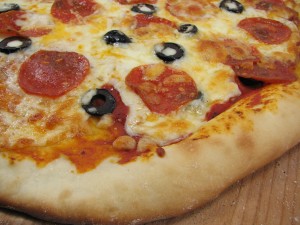 I liked the crust a lot but would have liked it with a little bit of olive oil I think. Michael said the olive oil might make it too crunchy but the only way to see is if we try it. He had a great idea to use some sea salt on the crust when baking it. 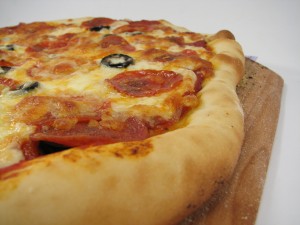 I ate three slices. I was famished after my swim and the pizza hit the spot big time. I ate two smaller sizes and one slice that was a bit bigger.

The perfect end to a Friday night: pizza, wine and funny TV shows. It was great!

QUESTION: Do you have a favorite pizza dough recipe?