For our first wedding anniversary Michael and I decided to take a road trip to Crater Lake. It’s a must-see destination in Oregon and yet neither of us have ever been! Or if I’ve been, I was a kid and don’t remember. I booked a cute cabin at the Union Creek Resort; it was built in 1922 in the Rogue River National Forest and about a half hour drive from Crater Lake. They boasted having a lodge, rustic cabins, an old-fashioned country store, a cafe and an ice cream shop. You can see the map here: groundsmap. 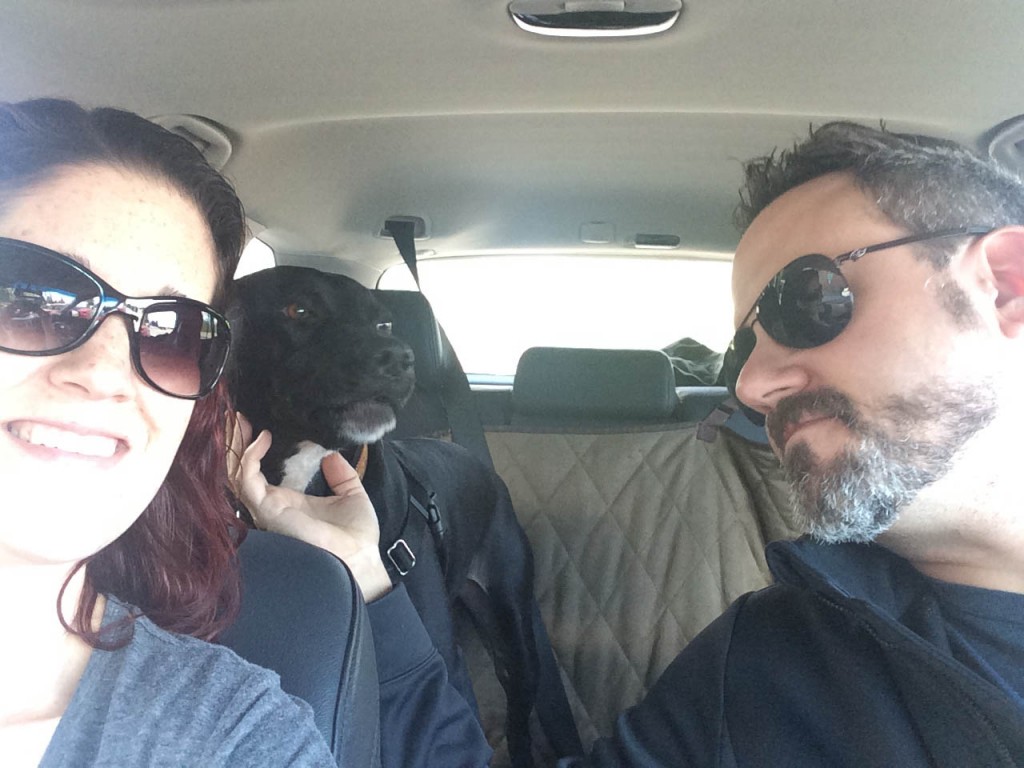 We packed up the car, and Bella, and hit the road! We stopped in Eugene for lunch. We went to The Cannery, a cool and hip-looking gastropub in the cute little downtown area. I don’t know Eugene at all, I think I’ve just driven through it a few times, but it seemed like a cute town! And of course a popular place if you’re a football fan… 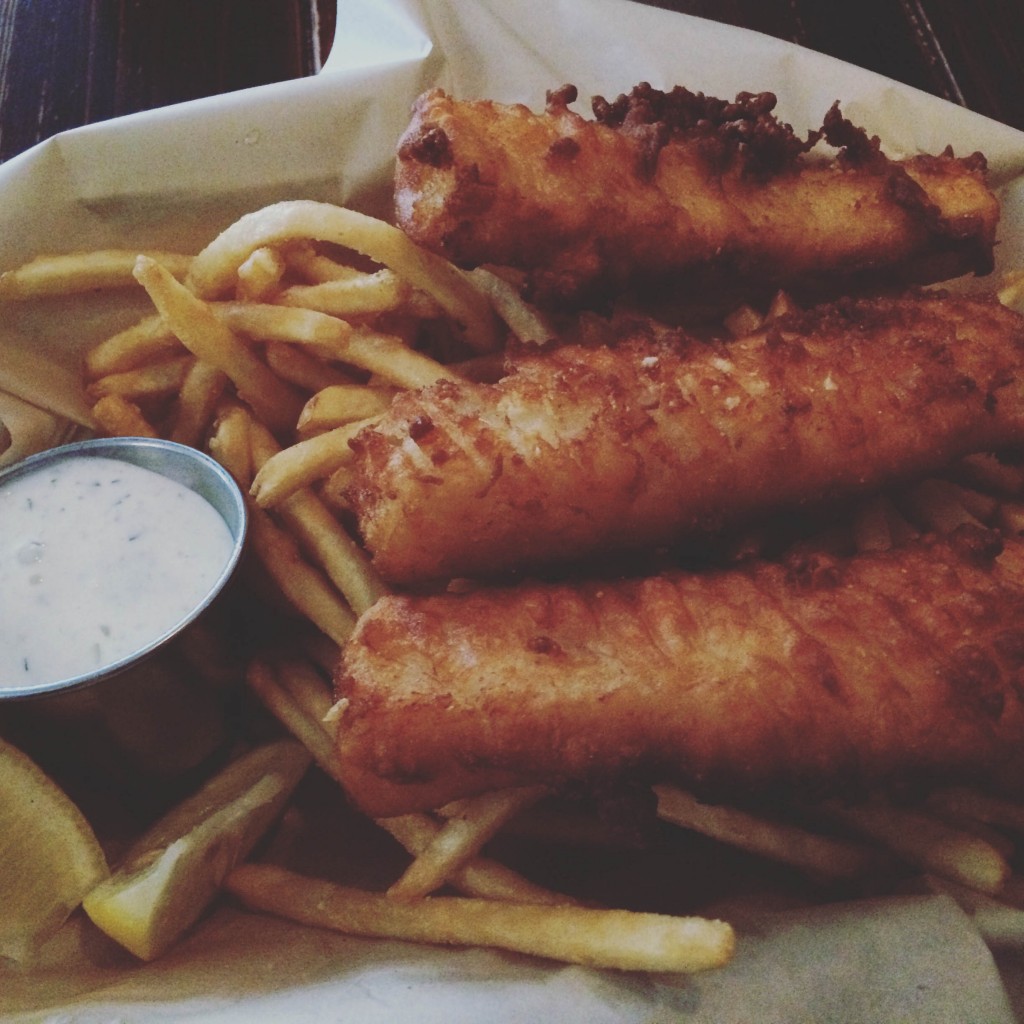 They had a fantastic tap list –and of course they had my beloved Boneyard beer on tap–which was a slight bummer since I couldn’t enjoy it. But I did get the next best thing– fish n’ chips! I hadn’t had them in ages and these were really, really good. They were small and the size and shape of chicken strips, which I kind of liked. The fries were pretty good too. Michael got the kale salad with chicken and avocado caesar dressing. His salad was fantastic! This place was great! I’d definitely go back if I was in Eugene.

After lunch we were back on the road and the drive was super pretty. We left the freeway and were on a highway right along the Rogue River. The roaring river, the trees starting to change colors, it was picturesque. The drive was a long one, nearly 5 hours total from Portland. We stopped a few times at rest stops for us (and Bella) and arrived at Union Creek around 4:30pm. It felt like we were in the middle of nowhere and we kind of were.

Here is our cabin: 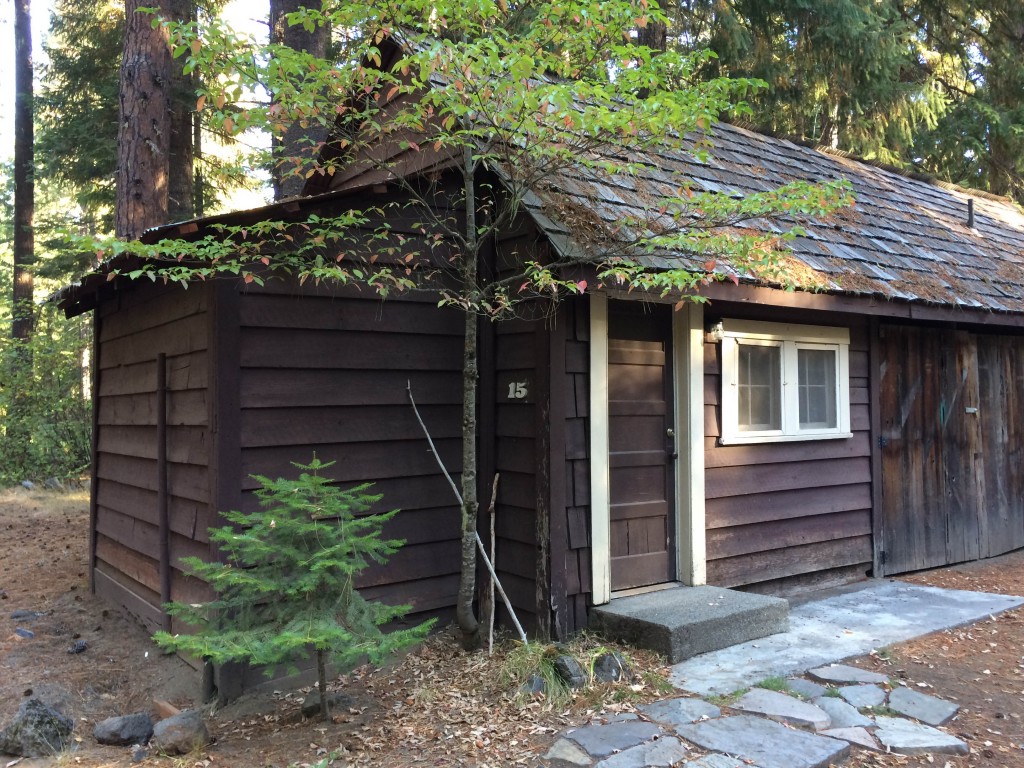 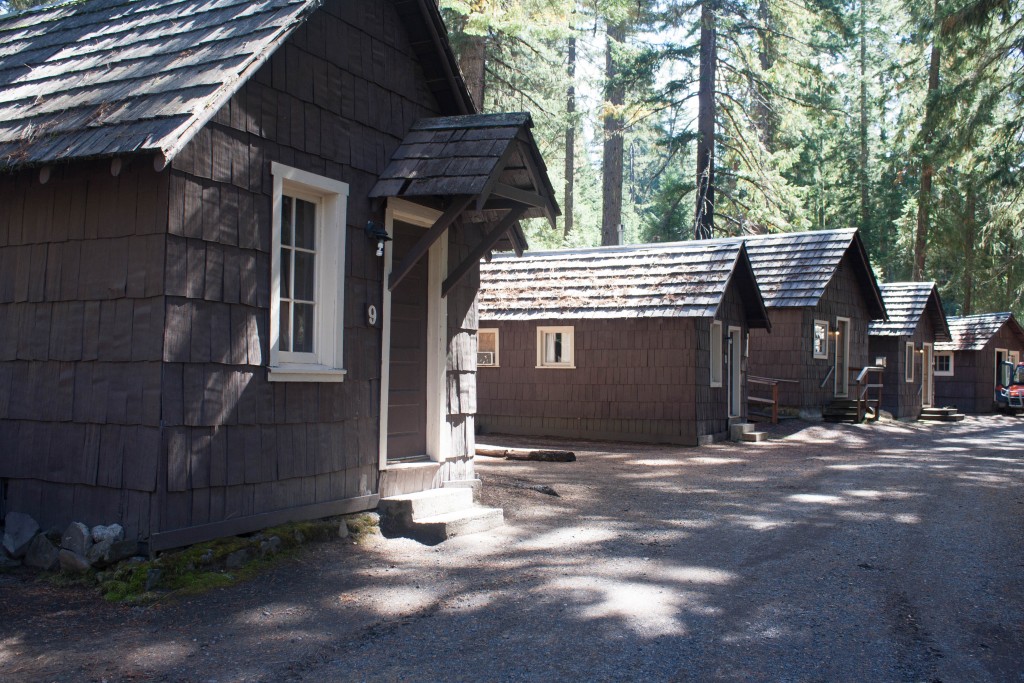 Our cabin was tucked away from the rest, which was kind of nice. And while it was by the highway you couldn’t really hear noise. The cabin itself was small and very rustic but it was all we really needed. A bed, a mini kitchen, a bathroom, electricity and heat. It beats camping! 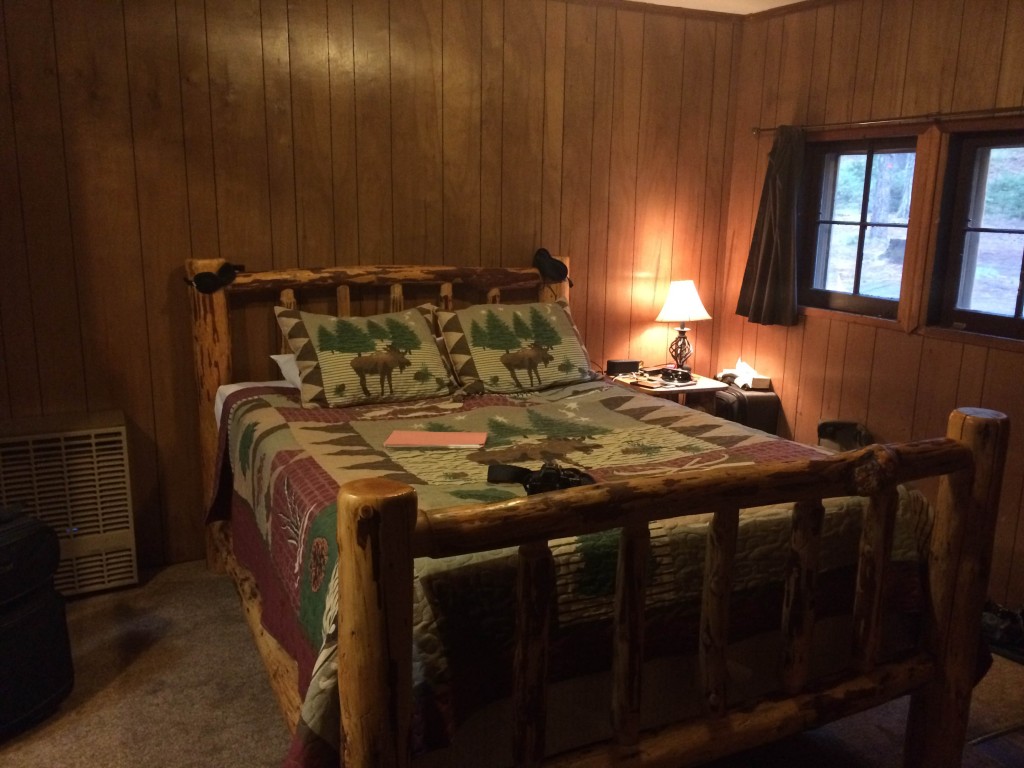 I’d packed a bunch of stuff for meals and that first night there we made taco salads for dinner and relaxed with some card games after the long drive. 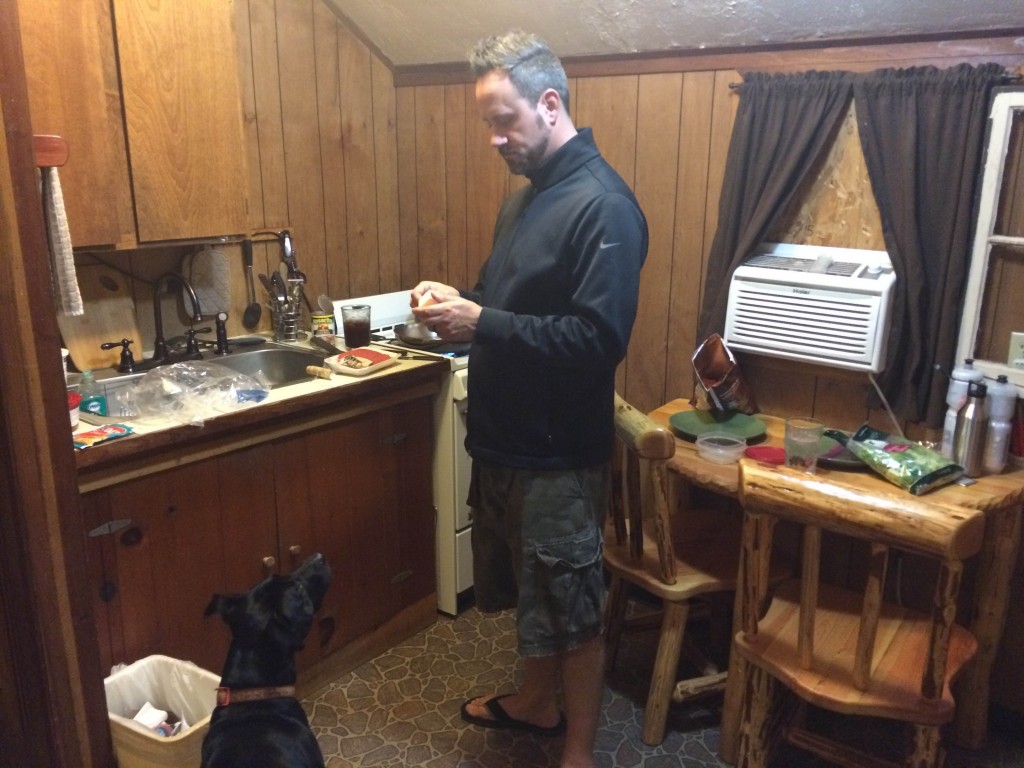 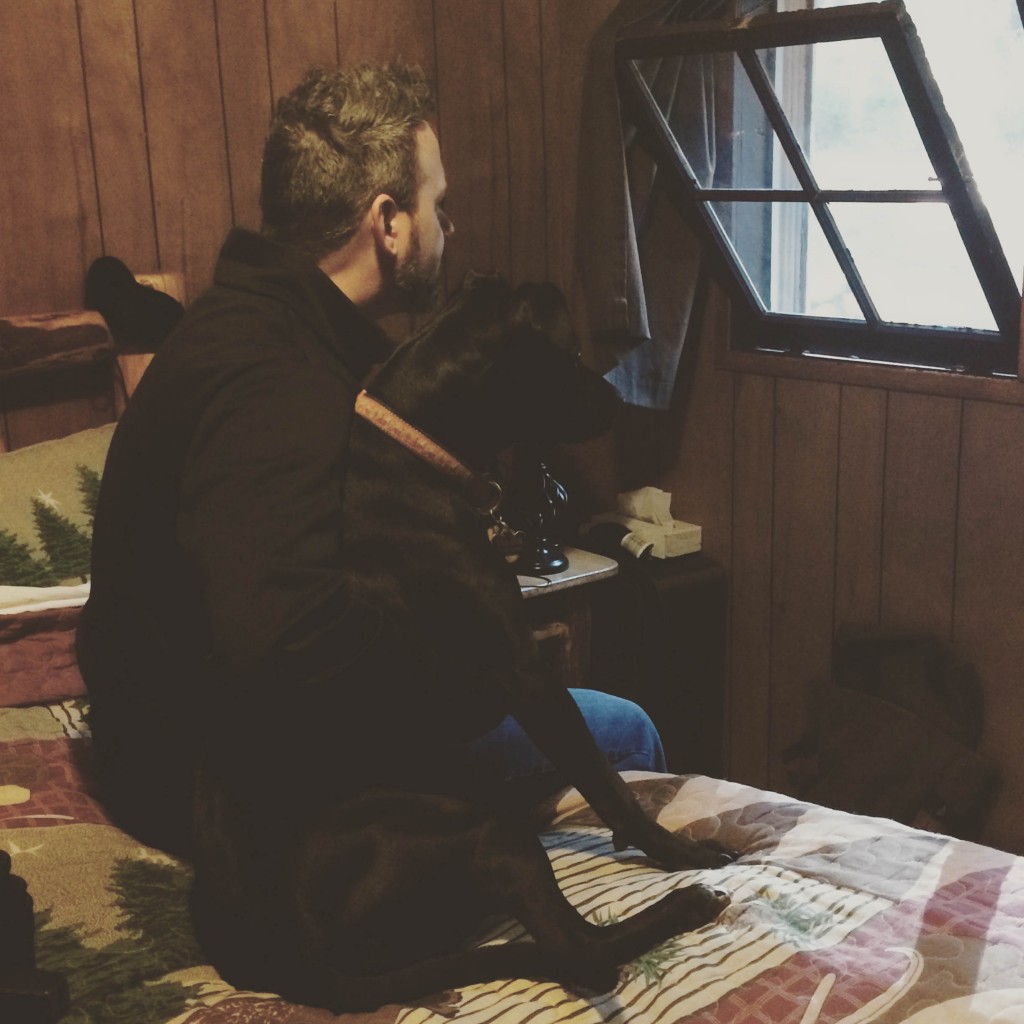 Our cabin was right by the Rogue River. Here is the Rogue viewpoint: 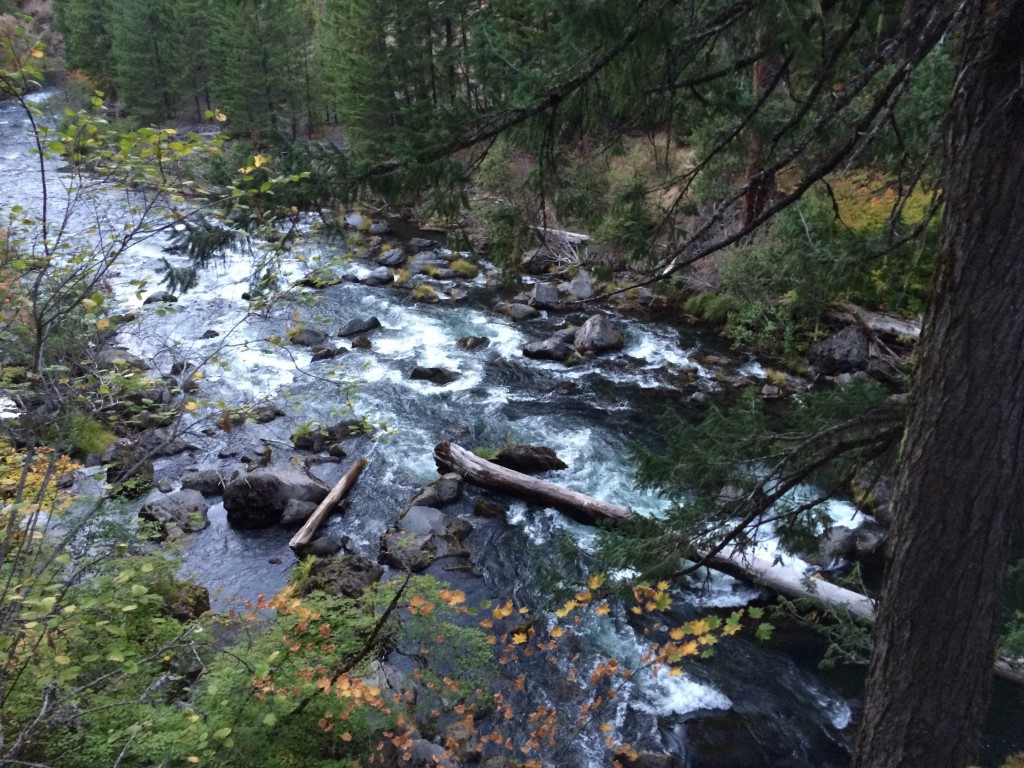 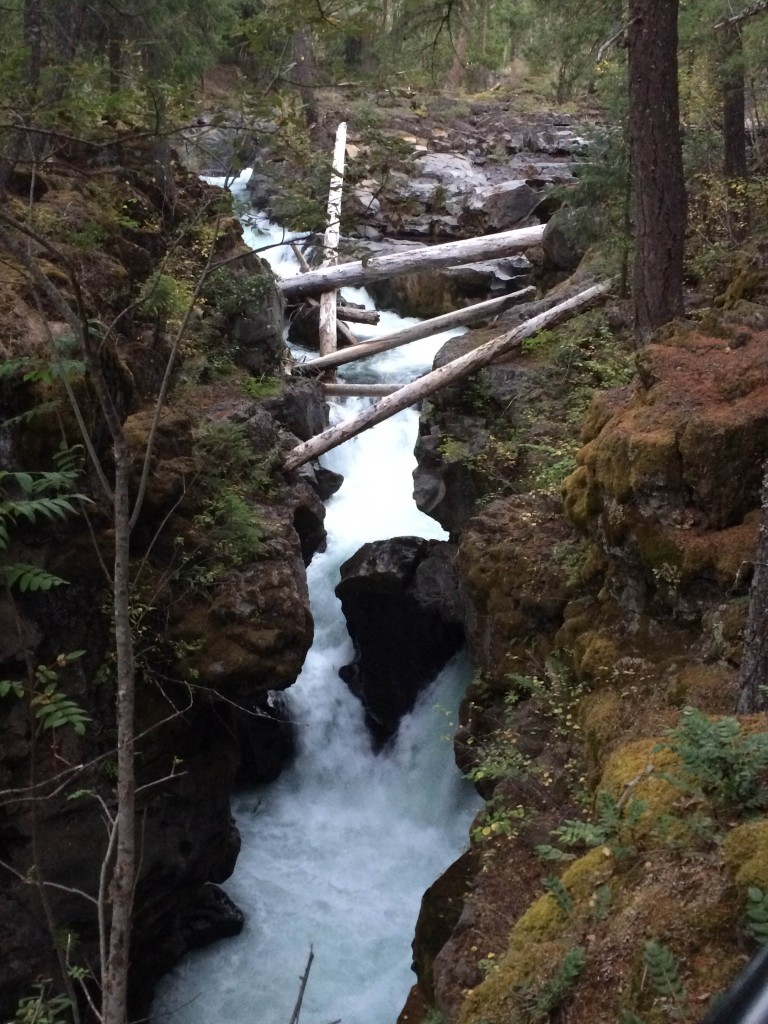 Not too shabby, huh??

One of the downsides: There was NO internet, no cell service at all. Which really isn’t that big of a deal because you’re kind of there to enjoy nature, etc etc…but it was slightly inconvenient for practical things like weather. The temperature swing was kind of crazy–in the 30’s and low 40’s at night and early in the morning but getting up to the 70’s in the day time. It made it difficult to figure out how to dress for the day or for activities.

Our first full day there we went for an easy hike on the Union Trail which was right by our cabin. 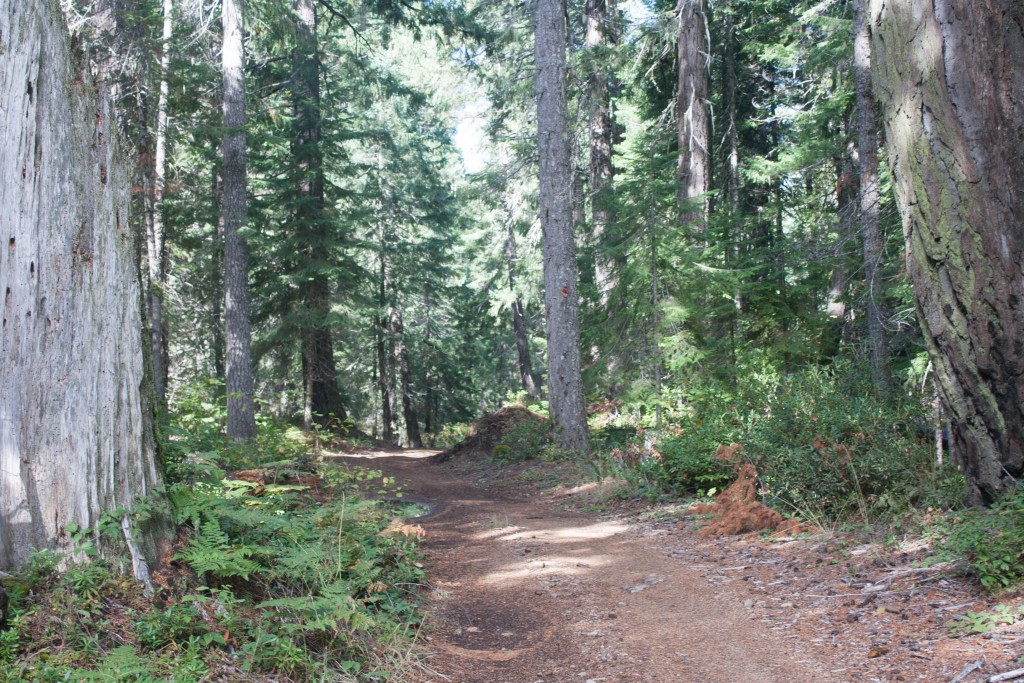 It was COLD. It was probably around 9am. We’d already eaten breakfast and got dressed in layers and I wore a wool hat, gloves and my big winter jacket. We hiked out through the woods, didn’t see a single person on the trail, and ended up doing around 3.5 miles. 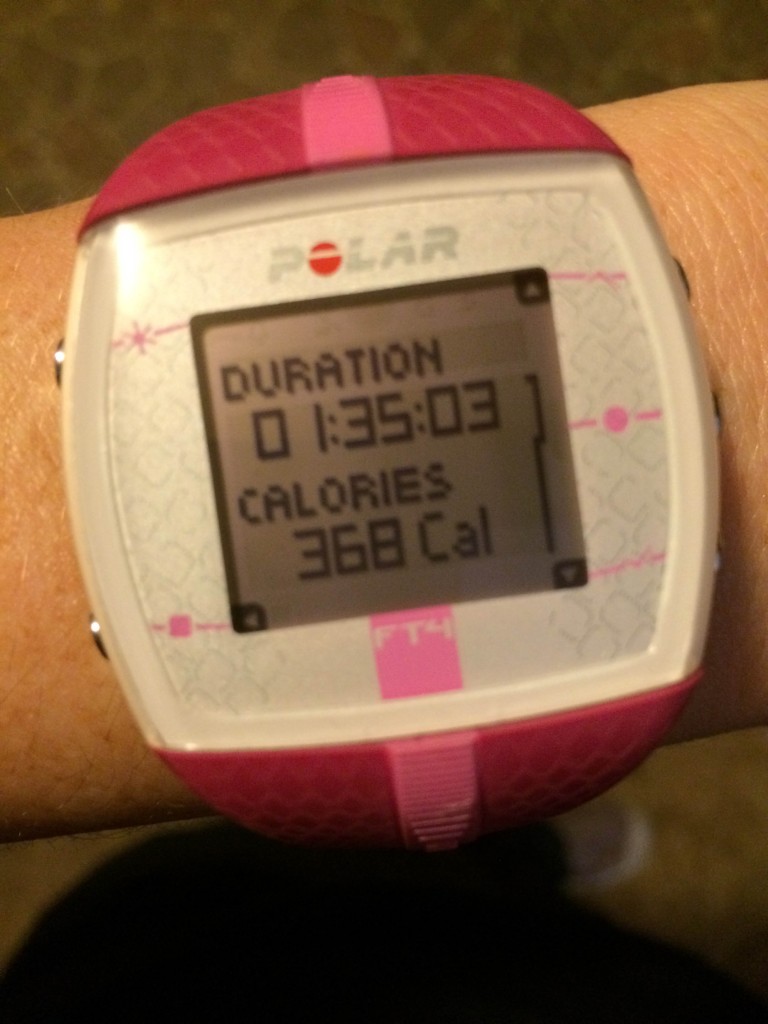 Back at the cabin we cleaned up and I packed picnic lunches. We had plans in Medford for the day (about an hour drive south) so we took lunch with us and stopped at Stewart Park along the way. We had our picnic lunches on the bench overlooking the lake. 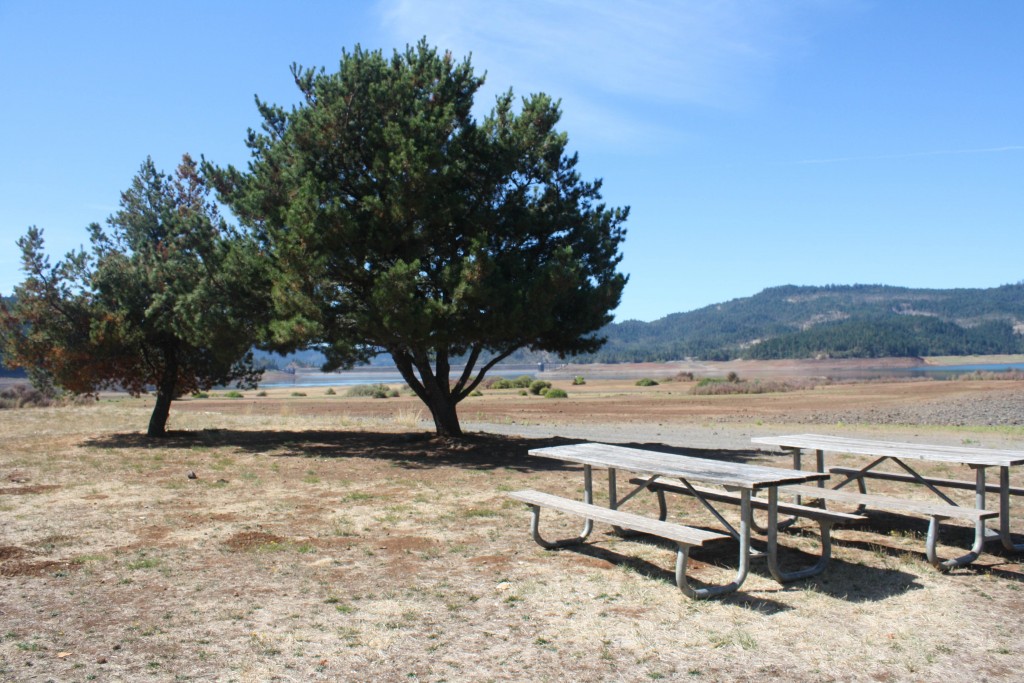 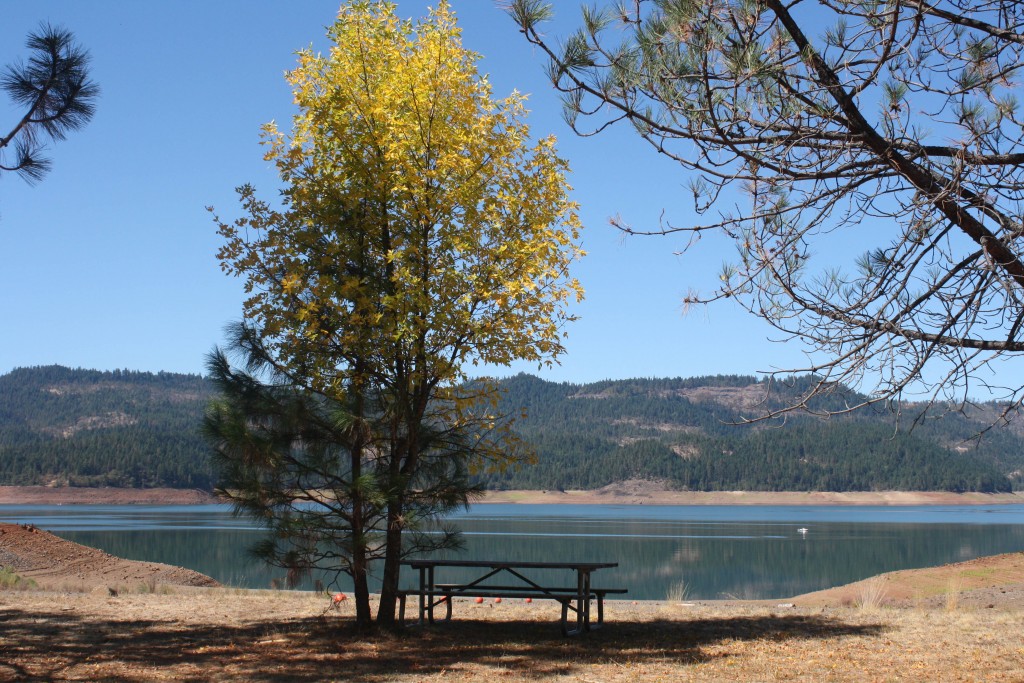 And here is evidence of just how bad the drought has been: 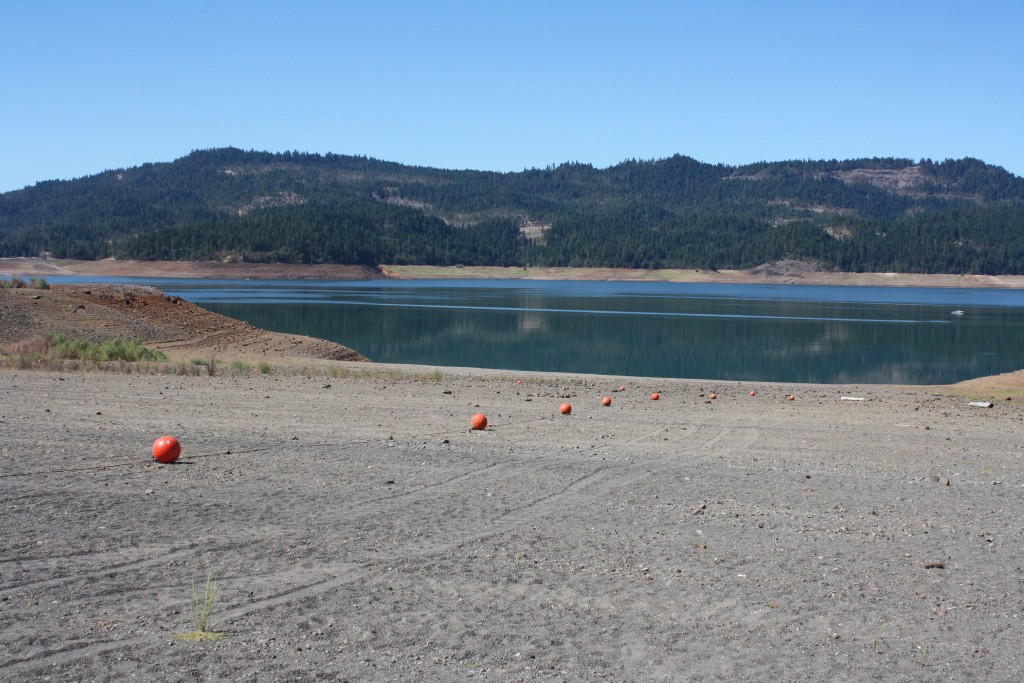 Yikes! That’s really low. After that we drove into Medford, made a quick stop for provisions at Fred Meyer, and then met up with Michael’s childhood friend Chris and his wife Jenna. I hadn’t seen them since our wedding last year (they got married a month after us and I wasn’t able to go to that). It was so nice to see them and catch up! He works for the fish and wildlife and does fire-fighting during the fire season. She’s a fire ecologist (which sounded really fascinating).

We went to a winery called Kriselle Cellars at their recommendation. It had stunning views of the valley, hillsides, farms, vineyards and mountains off in the distance. We all sat outside on the deck while they did a wine tasting flight and I enjoyed my sparkling water. This was kind of the first time I was disappointed I couldn’t partake because of being pregnant. Leading up to this I hadn’t missed wine (or beer) at ALL during my pregnancy. Oh well. Only 6 more months to go and then I can taste this wine: 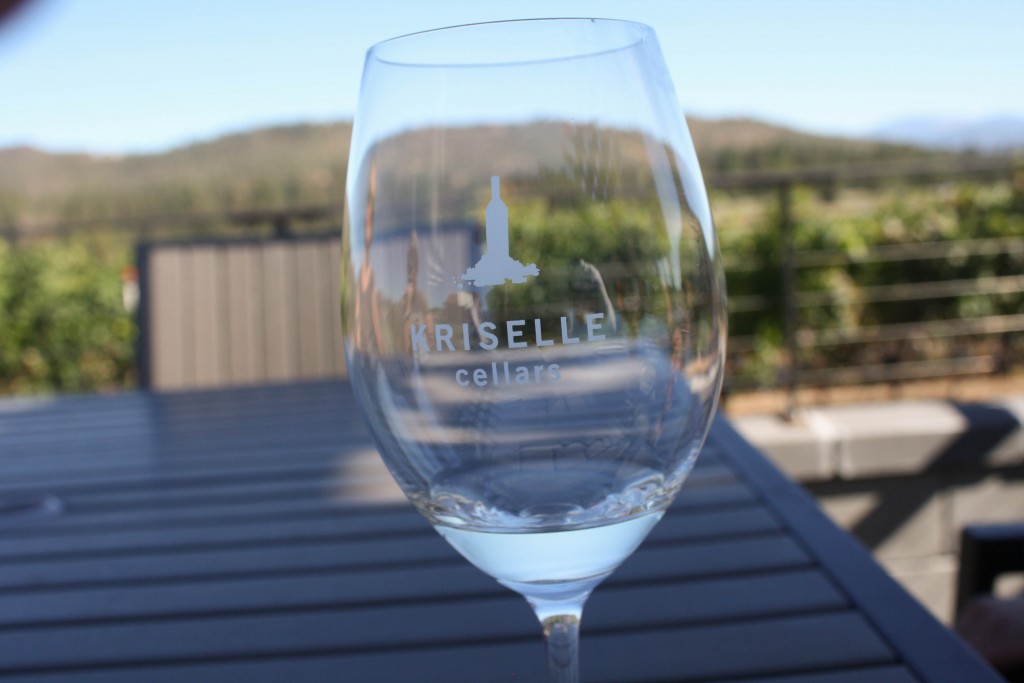 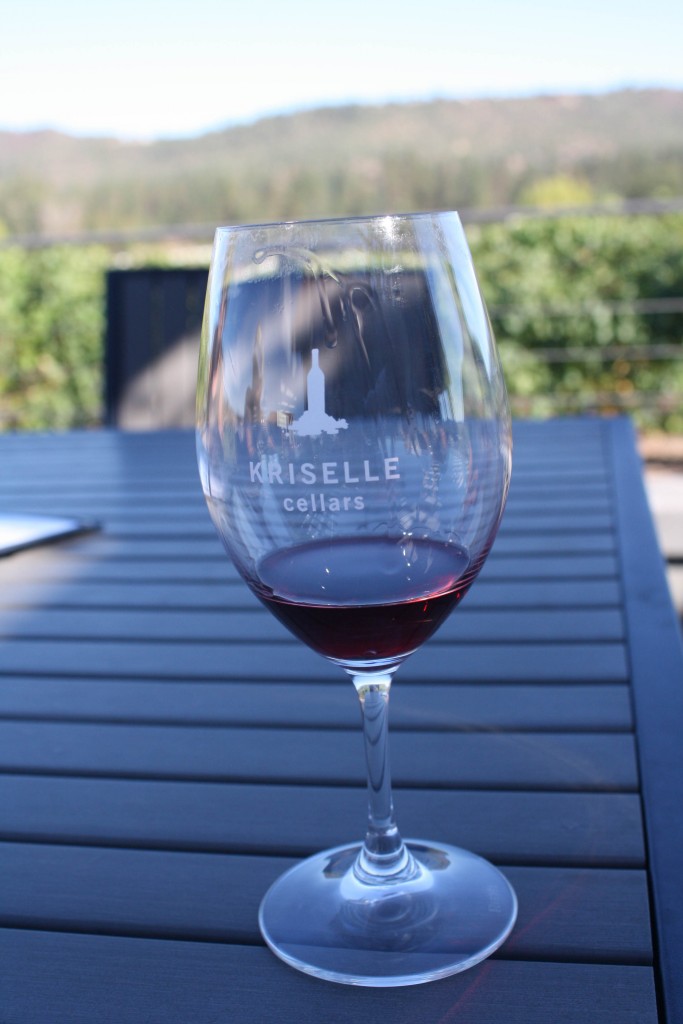 Haha! Michael bought a bottle of the Malbec just for me to have after the baby comes. 🙂 It smelled amazing so I’m looking forward to that glass. It was such a nice afternoon. The sun was out, it was hot and Bella could hang out with us as they tasted wine. 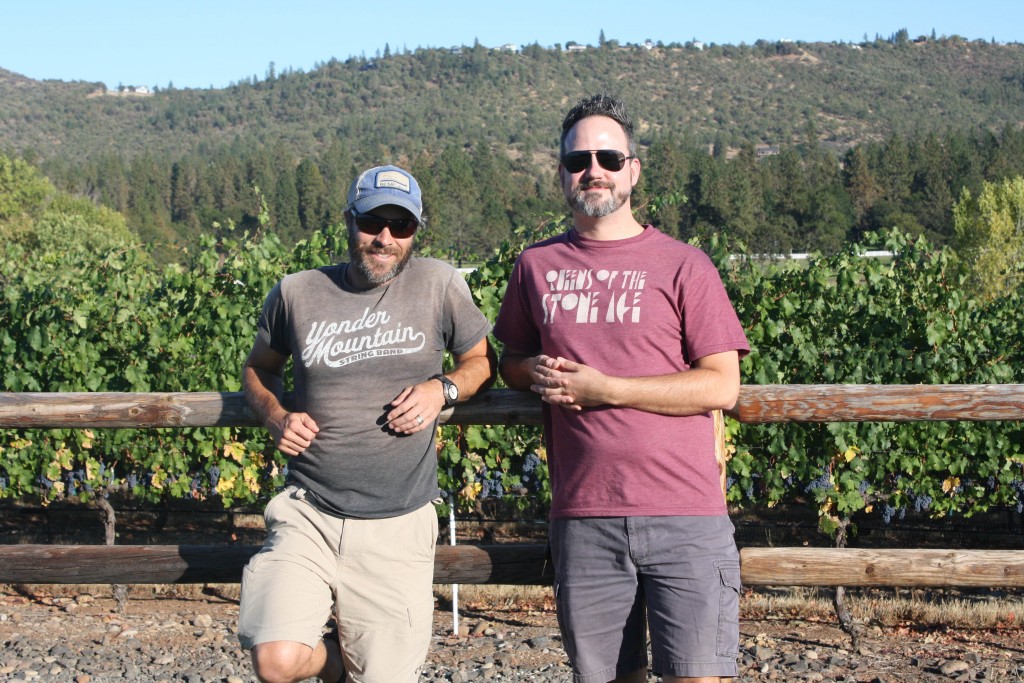 After that Michael and I went and got dinner. It was the FIRST In-n-Out opening in Oregon!!! We’d read about it a few weeks ago (and the 4+ hour long lines) and we had to at least try. I mean, when are we EVER going to be in Medford again, right?? 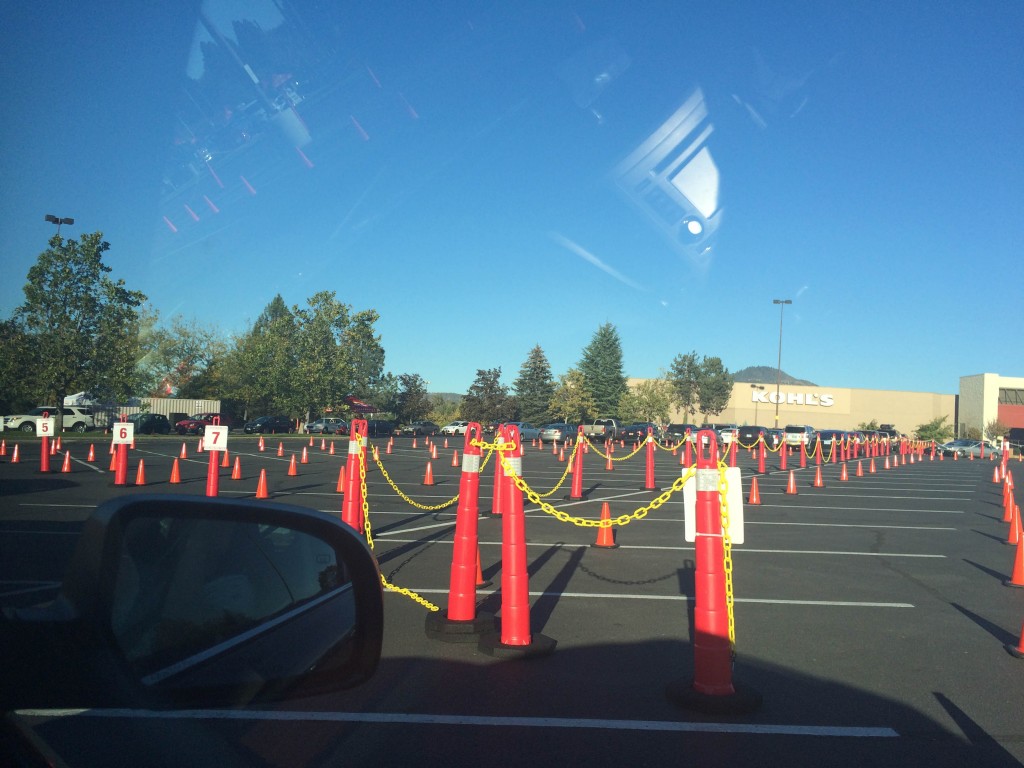 We got to the In-n-Out and there were people directing traffic. The lines looked crazy. They directed us into the adjacent mall parking lot where there were like 8 or 9 lines of cars (which one article said could hold 200-300 cars!!!). You couldn’t tell what was going on until you were stuck in the line and committed to it. 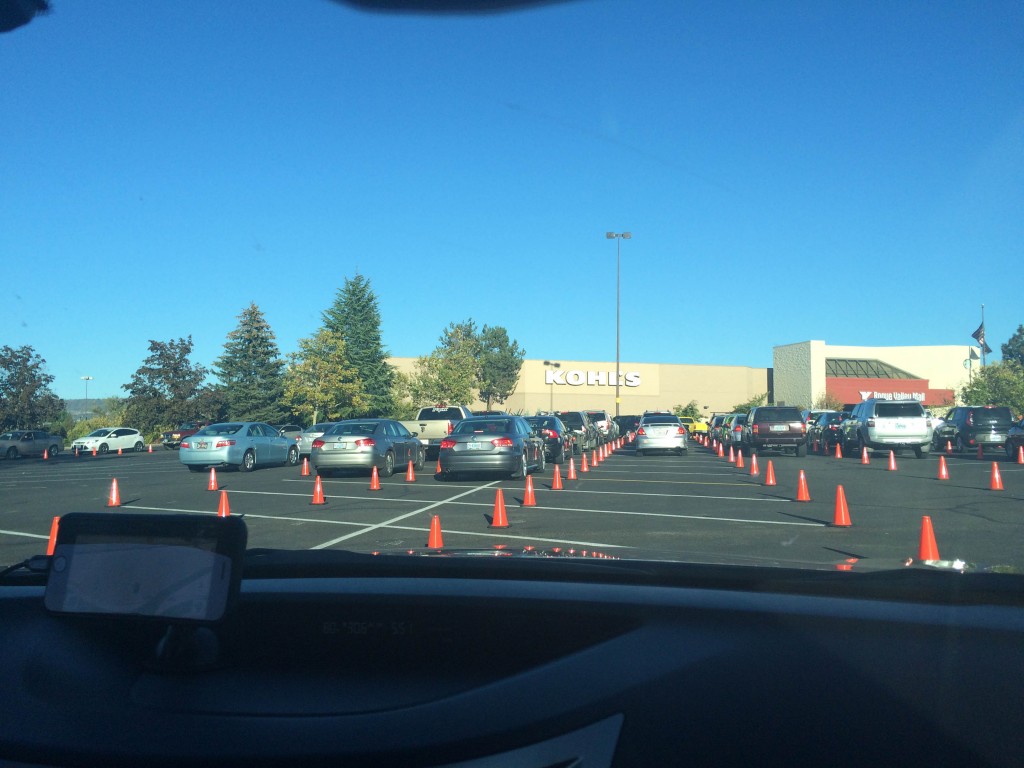 It kind of reminded me of the long lines to take the ferry in Washington! But, to be fair, the wait wasn’t TOO bad. From start to finish it was 50 minutes. That could have been a lot worse and they were super organized and the line moved pretty quickly. They took your order before you even got in the line to In-n-Out. 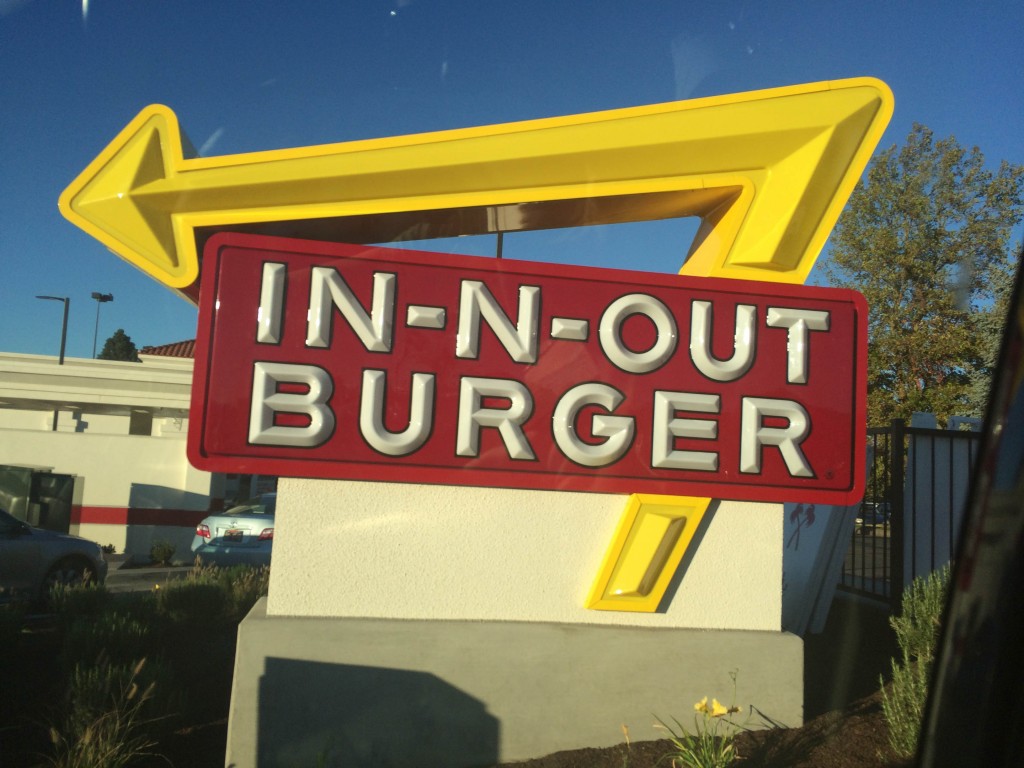 Finally! DINNER! I love me some In-n-Out! I’m not really a fast food fan and don’t eat it very often but this is one splurge I’m willing to make! Their burgers are so good! 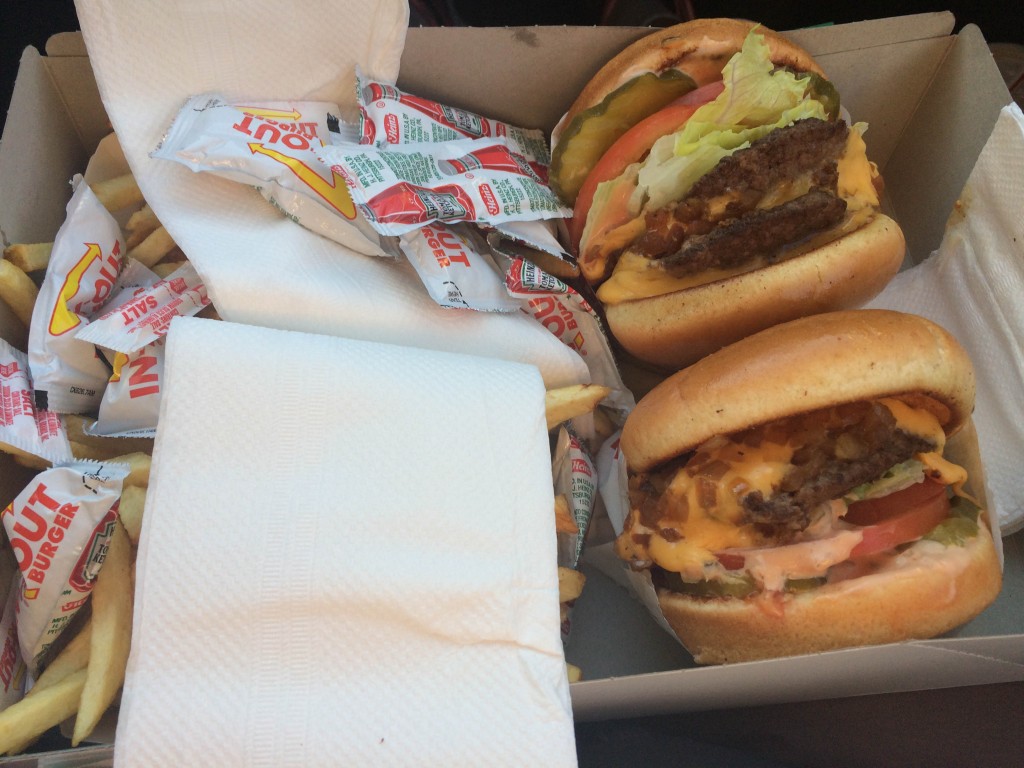 We ate our dinner, happy, and then made the long drive back to the cabins! It was a good day. 🙂

Summer is almost over. It’s hard to believe. Especially since it seemed to take forever for summer to even start here in Oregon.

I love Fall. It’s my favorite time of year. I enjoy wearing sweaters and drinking tea by a roaring fire. October is my favorite month and Halloween is my favorite holiday. With September’s arrival I feel like it’s not quite Fall, instead it’s like the last “hurrah” of summer–last chance hiking in warmer weather, last chance camping before the rain starts.

August was a really busy month for me. We had a lot of out of town guests visiting us. It was a month of training and achieving personal goals. I celebrated my three year anniversary of keeping off 100 pounds. There was some sad news in my world, but all in all, I’d say August was a pretty good month.

Did I achieve my August Goals?

2. Go on long bike rides training for the Portland Century. YES. Not as much as I would have liked but we did.

Relaxing is hard for me. If I see an empty day on my Google Calender I am much more apt to fill it with plans with friends or projects (never-ending projects!). I did read a lot of books this summer, though, so that qualifies as relaxing in my book. The best books I read this summer were:

Intriguing and easy to read. Made me homesick for Seattle: 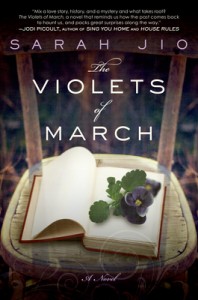 Heartbreaking. Cried the whole time. Was sad when the book was over: 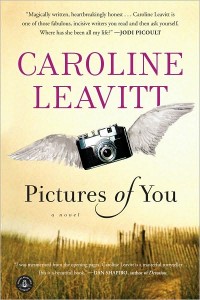 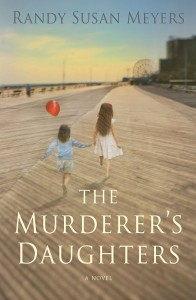 What are my plans for September? September is kind of up in the air for me for a lot of reasons. I feel like without a gym membership (possibly) I’ll be living in limbo a bit. But here’s what I can come up with in light of that:

1. Commute to work by bike as often as I can.

3. Take advantage of the nice weather and go hiking on the weekends.

Decent goals, I think. No matter how this gym-thing shakes down, I will stay committed to exercising and living my healthy lifestyle. I don’t need a gym to stay fit. My hobbies have taught me that. Going scale-free has taught me that. It will be okay.

QUESTION: What was your biggest challenge in August? What goals are you setting for September?