Monday night I met my cousin Anna at American Pinot for Happy Hour. I’ve been wanting to check out this restaurant for awhile now because I walk by it all the time during my lunch break. 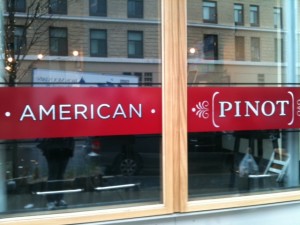 My cousin Anna and I were best friends growing up. In our mid-20’s she joined the Peace Corp and lived in Morocco for several years. She’s back in Portland now and we got caught up.

She was sipping a glass of the House Red when I arrived. She wasn’t impressed with the wine. I ordered a Syrah and it was delicious: light and not sweet. It was a little bolder than I was expecting for a Syrah too. 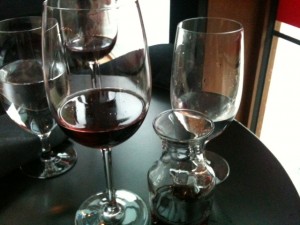 I ordered a bowl of French Onion Soup. I wasn’t that impressed with it, honestly. It was a little bland for being French Onion. But maybe I’ve just been spoiled with really, really good versions at Petite Provence or Chez Machin. Maybe all the soup needed was a dash of salt. I’m not sure but it was lacking. 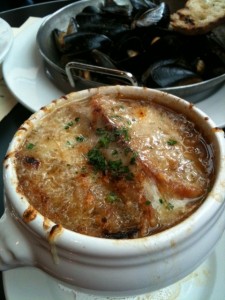 Anna and I were eying the table next to us and their big platter of mussels were calling to us. I can’t remember the last time I had mussels or clams so we decided to go for it! 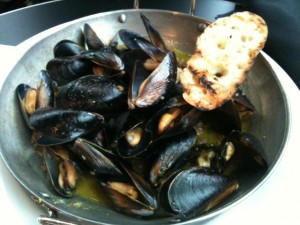 They were Penn Cove Mussels pan-roasted with spicy sausage in a basil pesto butter sauce. I squeezed some fresh lemon over the mussels and we dug in. 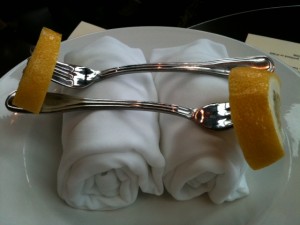 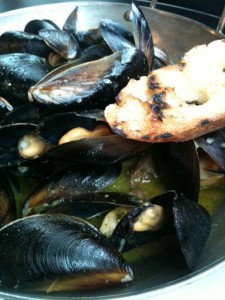 The mussels were soft and perfectly cooked. They weren’t rubbery or too chewy like some can be. The butter pesto sauce was surprisingly mild but delicious. I really loved this dish. 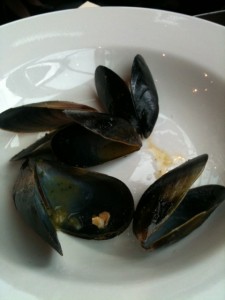 It was good conversation and it was nice to catch up. I got a second glass of wine, a Cherry Hill Pinot that I didn’t like as much, and we split that glass. For a restaurant named after a wine I was surprised that their wine list wasn’t more extensive. The wine list fell short for me as well. I was also disappointed that there wasn’t a Happy Hour price for wines either. 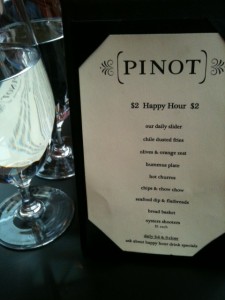 I liked the restaurant but I was surprised at how dead it was. Granted it was a Monday night and it was pouring buckets of rain in Portland but it didn’t look like business was very good. 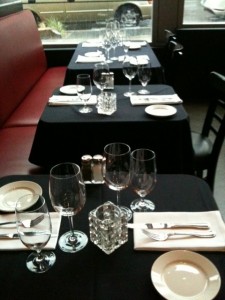 Maybe the weekend traffic at the restaurant is busy enough to keep them in business…? 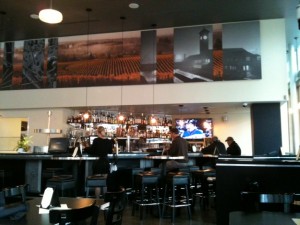 After the mussels were eaten we got a small order of crusty French bread to soak up the sauce. It was awesome. The French bread was also piping hot. 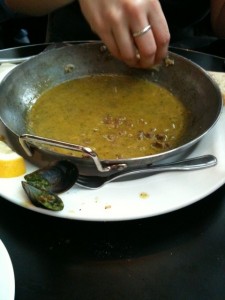 Overall it was a nice night. The service was good, the conversation was nice. Most of the food was delicious. There are a few things that fell short for me with American Pinot and I have a feeling it won’t be in business long, which is a shame.

Anna and I walked 10 blocks or so to the bus stop in the pouring rain. I was drenched to the bone and my shoes were water-logged. I had an enjoyable night despite the short-comings.

I’ve been having anxiety lately about all the restaurant eating I’ve been doing. Eating out with friends, cooking that Four Course Dinner for Michael…I just feel like I’ve been a little out of control of my food and eating in the last few weeks. It’s been hard for me to thoroughly enjoy it because I feel like I’ve been over-indulging too much. I have a few more dinners planned with some friends in the next week or two so I’m going to really try and reign it in. I know how to make healthier choices at restaurants, it’s just a matter of doing it.

I had also planned on working out at Crossfit with my old trainer today but I’m still too sore from the weekend’s yard work. I think I’ll push it to next week and hobble home tonight. My hamstrings are still screaming at me.

QUESTION: Do you like mussels? Have you prepared them at home? How do you get over your restaurant anxiety?