Saturday night I had plans to meet a friend for dinner over on NE Alberta. I decided I wanted to get some writing in so I left the house a few hours early in hopes of planting my butt in a coffee shop for a writing session before dinner. 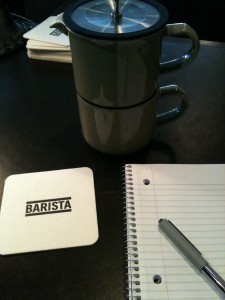 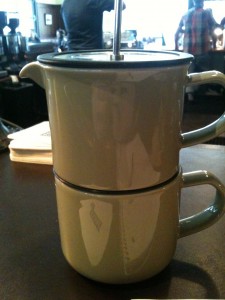 I ended up at Barista on NE Alberta (it’s a trendy neighborhood with nice restaurants, boutiques and art galleries). I ordered the Green Jasmine tea and found an empty barstool in the corner. The place was really cute and the guys working there were nice and friendly to everyone. 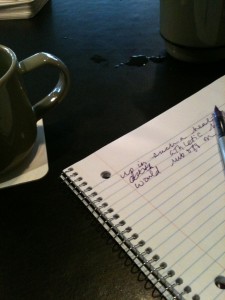 I wrote old-school with pen and paper. Nope, I don’t have a laptop (although it would have been preferred). When I was a kid I had an old fashioned type writer that my Grandma gave me. It was one of those ancient black ones with the keys that were raised. I would spend hours in my bedroom typing away on that monster of a machine. When I was about 13 I got an electric typewriter for my birthday. It was the best thing ever! I was so excited! Eventually I graduated to a computer. 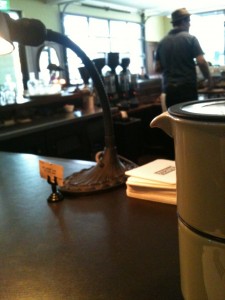 There’s something to be said about writing with a pen. The words just flew out of me and I didn’t have the distractions of “Oooh what’s going on on Facebook or Twitter right now?” like I would have had with a laptop. I wrote for about an hour and 15 minutes and got 9 pages done. 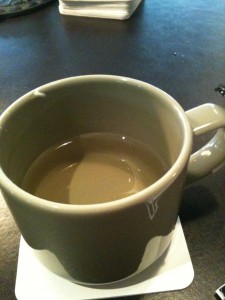 My aromatic Jasmine tea was gone and there was an old-fashioned cuckoo clock on the wall telling me it was time to go. I finished up my thoughts and headed to the restaurant a few blocks away. 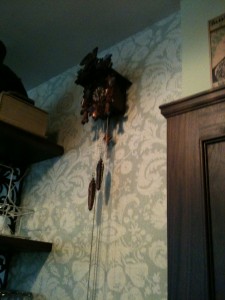 I met my friend Sam at The Hilt on 19th and Alberta. Looking at the website I thought it was a nicer restaurant, but in reality it was kind of a dive bar. That was alright though, we decided to be brave and check it out. I ordered a glass of the Syrah. It also turned out to be Happy Hour so we snagged some cheap eats too. 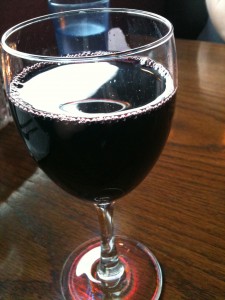 We split the hummus and pita plate and the calamari with tzatziki dipping sauce. The calamari was really good. We both liked that a lot. The hummus was a fail. It was lacking something–besides flavor. Salt? Lemon? Garlic? I think anything would have been an improvement on how plain and boring it was. Needless to say neither of us ate much of the hummus (disappointing). It definitely didn’t compare to Hoda’s hummus (yum). 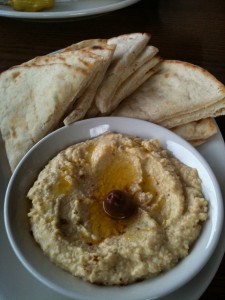 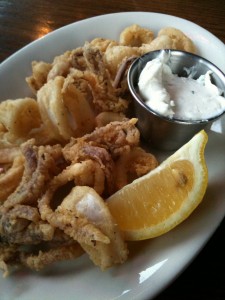 We both ordered the lamb gyro for dinner. The lamb was room temperature, there wasn’t much sauce on it but I supposed that meant it wasn’t oozing calories, either….right? Looking on the bright side! The gyro wasn’t bad but it didn’t hold up to the awesome ones I’ve had before in Portland. Oh well. Not every restaurant can be a winner. Sam and I both decided we’d go back to The Hilt this summer to have drinks on their outdoor patio BEFORE we go to another restaurant for dinner! 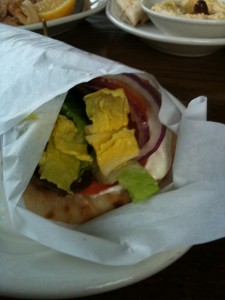 A few hours later, food and drink were gone so Sam and I walked up and down Alberta chatting and catching up some more. It was a really nice night, a little cool but not cold, and the best part: it wasn’t raining. On our stroll we discovered about 4 other awesome looking restaurants we SHOULD have eaten at. Oh well. Next time! 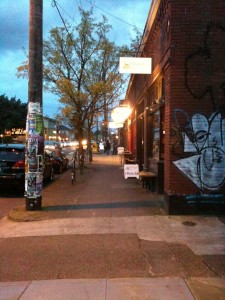 The Alberta Arts District has “Last Thursday” once a month–where the street is shut down for vendors and artists and stuff. It’s a cool event once a month, usually in the summer time, and I’ve only been once or twice since I’ve lived in Portland. I’ve kept meaning to go again because it’s so fun. Sam and I agreed we’d definitely check it out this summer. I’m looking forward to it! 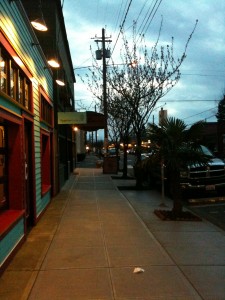 We walked to the end of the strip, crossed the street and then walked back towards our cars. We passed by some packed restaurants (one was a Vegan restaurant) and lots of art galleries. This one in particular caught my attention and I’d love return when it’s open. How cool are those sculptures? 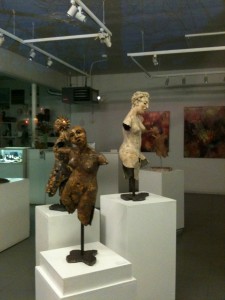 A few doors down we passed a Donut Shop. We hadn’t planned on getting dessert but walking by the open door with the smells of baking sweets wafting out onto the street was just TOO hard to pass up. Mmmm check out these babies: 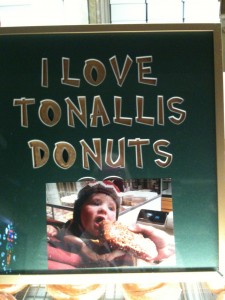 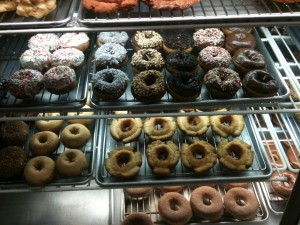 Sooo tempting! My mouth was watering at the sight and smell of those donuts. Sam and I agreed to split half a dozen donut holes in an effort of “being good.” That meant we each got to eat 3 donut holes. I think that’s a fair compromise and eating in moderation! We strolled down the street to our cars sharing the donut holes. They were light and airy. Perfect (and I wanted 6 more!). 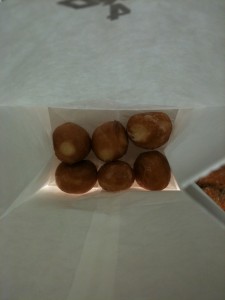 We hung out at a firepit outside of a cafe for a bit and then parted ways. 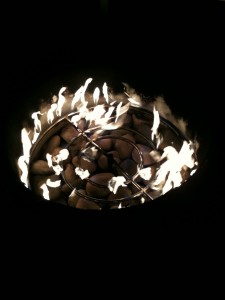 I had a really nice night with the writing, catching up with an old friend, exploring a part of the city I don’t normally go to. It made me long for summer. I love walking around Portland, eating on restaurant patios in the summer time! With the weather now cooperate, please?

It wasn’t quite the “exciting” Girl’s Night Out of my 20’s, a little more low-key and nerdy, but I loved it. I got home and immediately crashed in bed with a muscle relaxer and my heating pad. As the day had stretched on I could tell I was going to be even more sore from my Crossfit workout that morning.

QUESTION: Is there a part of your hometown where you rarely visit but wish you explored more often? And if you like to write, what’s your ritual for doing so?