I had *THE* best crockpot recipe 15+ years ago and I guess somehow, in several moves or something, I lost the recipe. I was SO crushed because after years of trying different chili recipes, I had finally found one that I loved and I haven’t been able to figure out where it went. I’ve tried a dozen or so chili recipes since and they are often pretty good, but not “THE ONE.” Oh well…I’ll keep trying.

I found this recipe and gave it a try, with a few modifications. I used ground beef and chunks of steak (instead of ground pork). I will try using pork next time but I did enjoy having the chunks of beef in the chili.

My parents were in town for the weekend and I decided chili and cornbread would be a good meal to make for all of us. 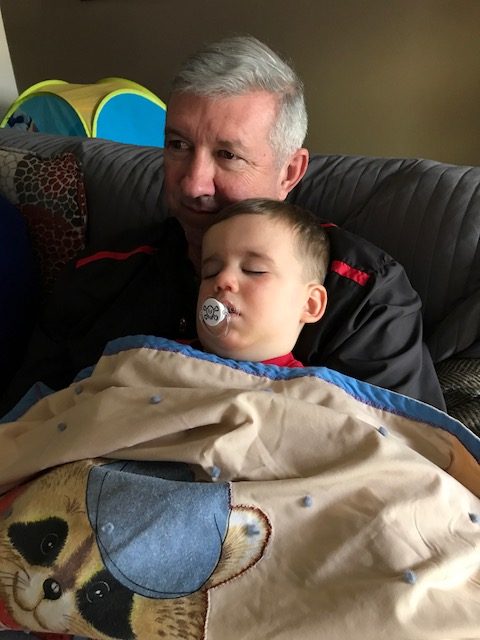 Michael’s back is still in bad shape and I’ve been taking over most of the Logan and house duties. (He’s getting an MRI this week, so hopefully we have answers soon!) I’ve been pretty overwhelmed and stressed trying to take care of everything, so it was nice having my parents visit to help with Logan. They took care of him Saturday so I could get a break and go to the gym.

I got home and showered and they picked up lunch (coleslaw, potato salad, quinoa salad and vinegar wings–my new favorites!) and we hung out watching the Olympics. Logan didn’t want to take a nap in his crib, so he took a nap on my dad instead. 🙂

After naps, my mom and Logan made cornbread to go with the dinner. Logan was super helpful! 😉 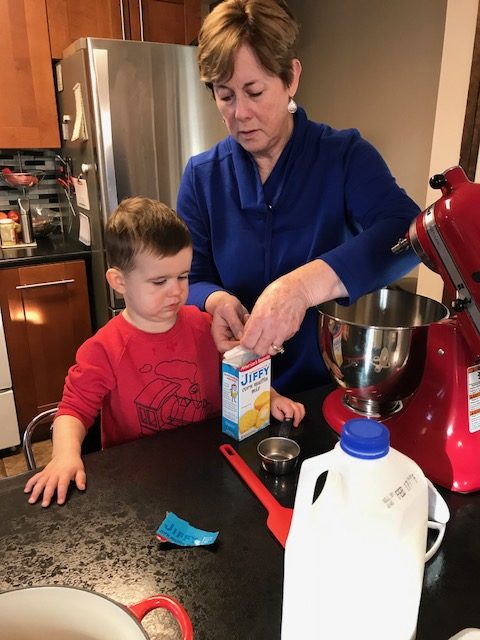 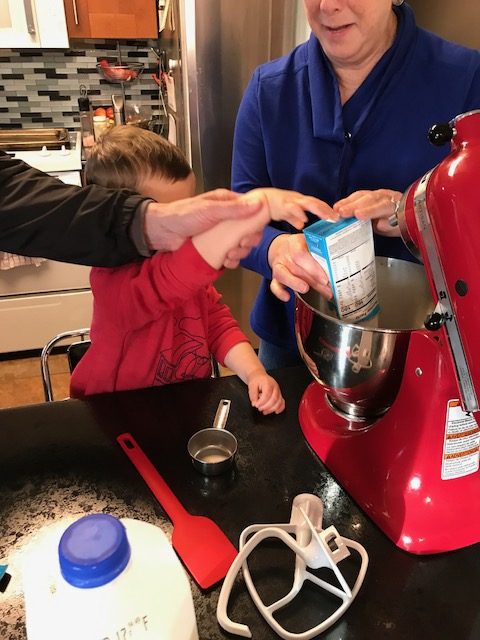 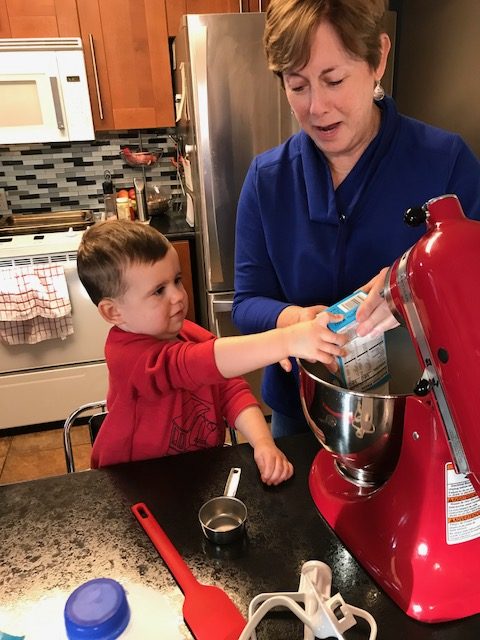 He loved helping. It was really fun seeing him try and “cook.” My mom liked it too. Lots of good memories! I topped the cornbread with some shredded cheese and popped it in the oven. 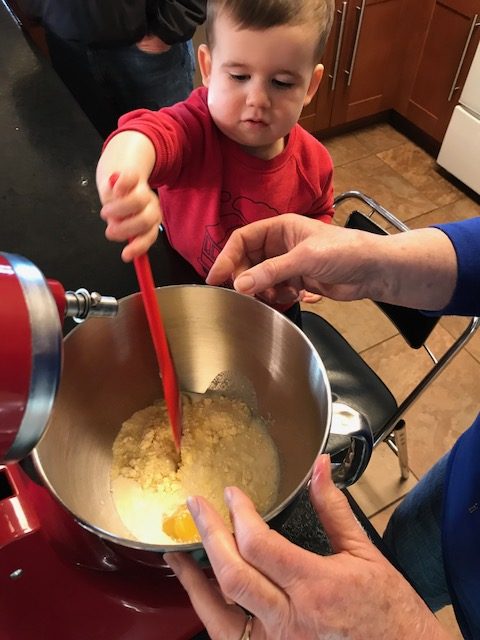 The cornbread turned out great! 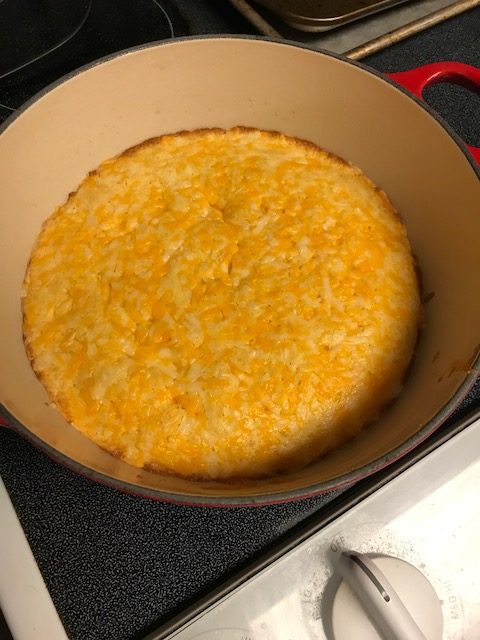 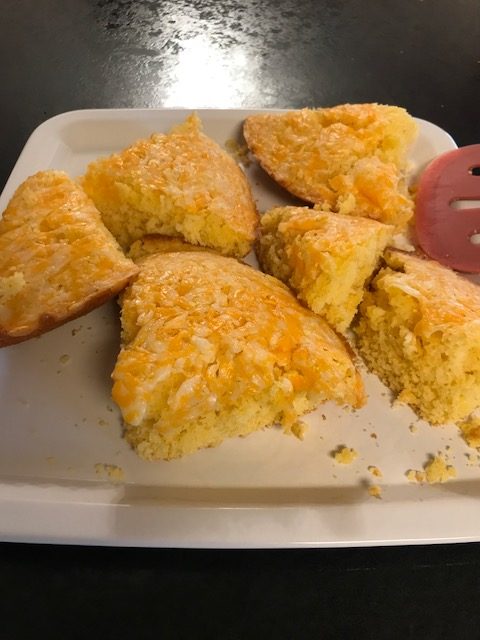 Time for dinner. The chili was pretty good. I would have preferred it to be a bit more spicy, but my parents aren’t spicy food people. (I will be adding hot sauce to the leftover). They loved the chili and said it was great. Michael even liked it, and he is not really a chili fan. 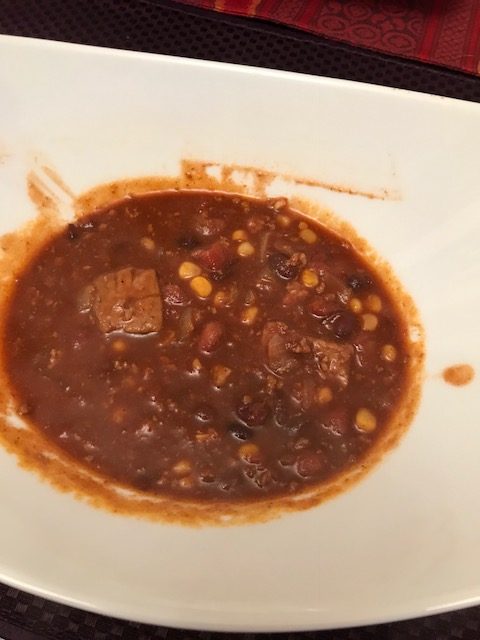 The chili was definitely better with cornbread and toppings! 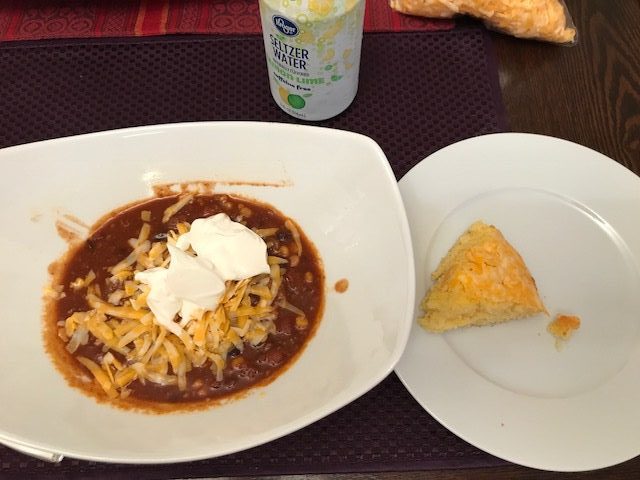 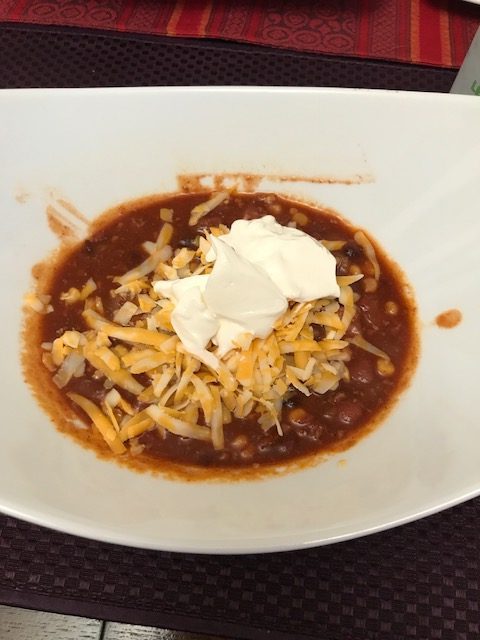 The recipe said it had 6-8 servings in it. We each had 2 scoops for dinner (so 4 servings the first night) and I think there are at least 4-5 more servings in leftovers. I am taking some to work for lunches this week. 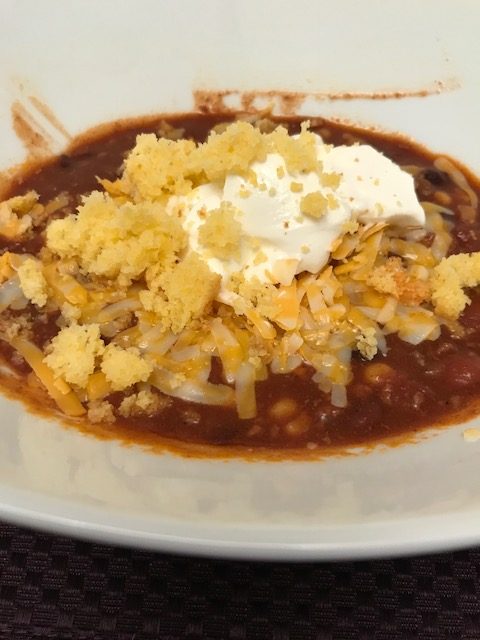 It’s even better the next day, a little thicker. I would definitely make this recipe again.

QUESTION: What is your favorite chili recipe?

Logan has had a cold this week, which means he’s not sleeping well, which means we aren’t sleeping well….! I’ve been exhausted all week. So I was super surprised on Saturday morning when I went to the gym and had energy for days! It was a great workout! I did 30 minutes of strength training–body weights, free weighs and kettlebells, and then 30 minutes on the elliptical. 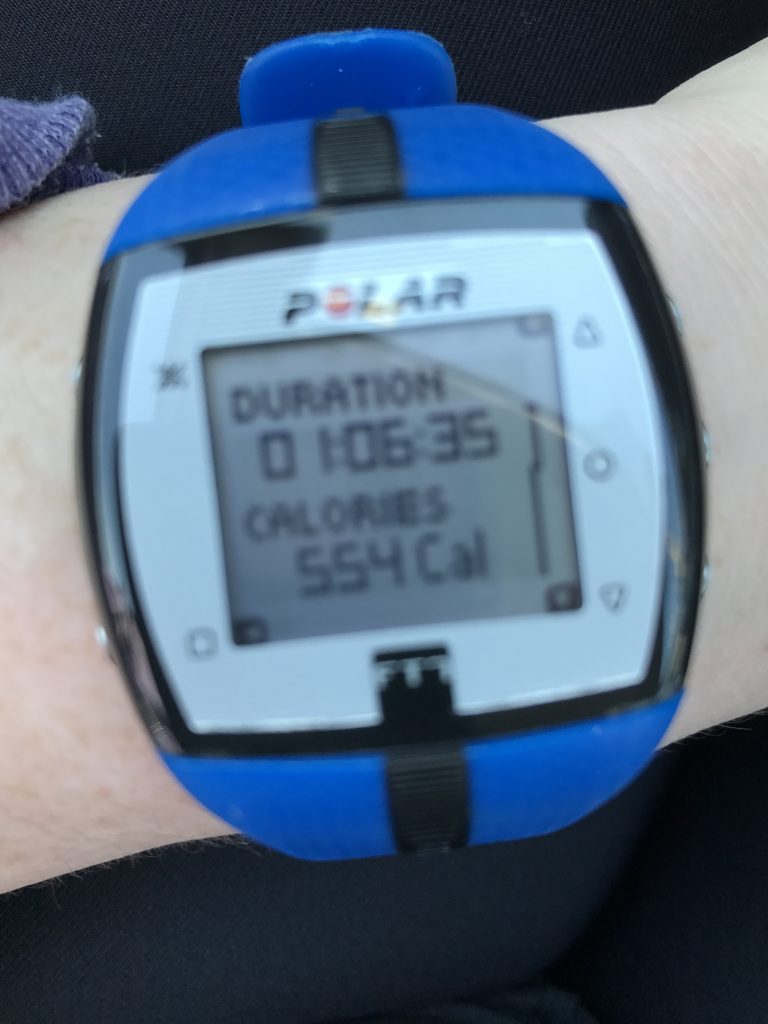 I could have kept going, too, but I had things to do! I went to the store to get groceries and then home to make this dinner:

I’ve made several Skinny Taste recipes before and they were always really delicious.

Our friends had a baby last month (their third!!) and we signed up for their meal train dinner. It was so amazing when we had Logan and friends and family made us meals. It was so so so helpful and generous and we ate some really great food.

Originally we were going to do Michael’s mac n’ cheese but our friends are dairy-free at the moment so I decided to make them chili. I’ve been craving chili for awhile now. 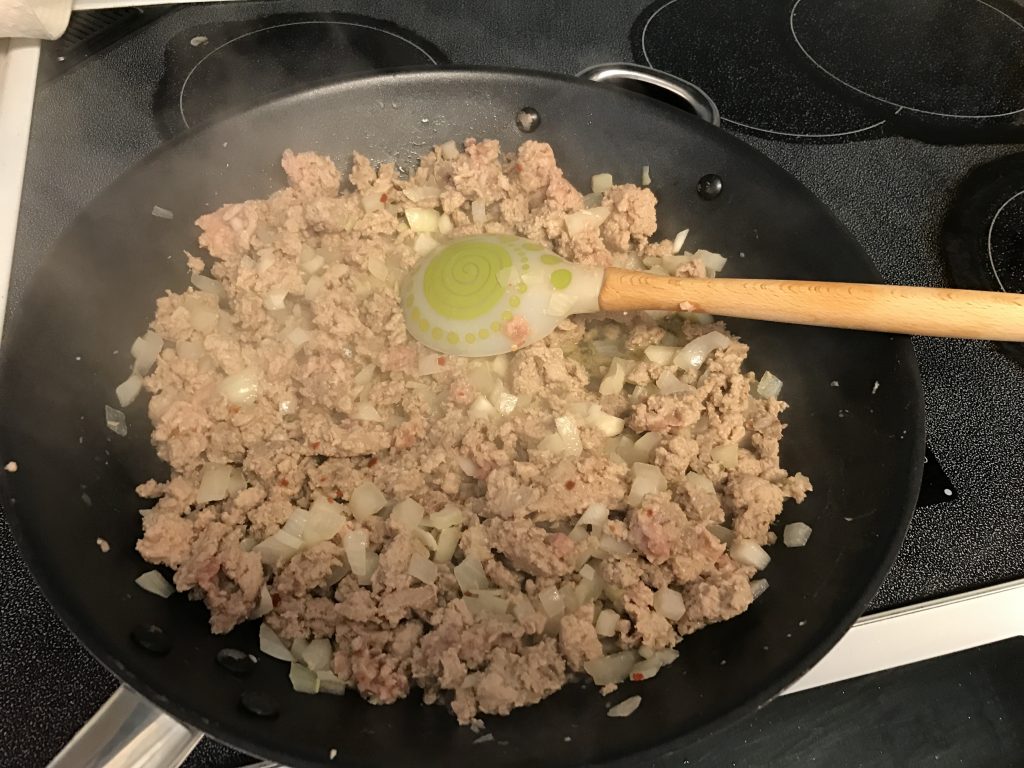 I browned the ground turkey and onions. (I added a teeny bit of spicy ground pork for some flavor.) 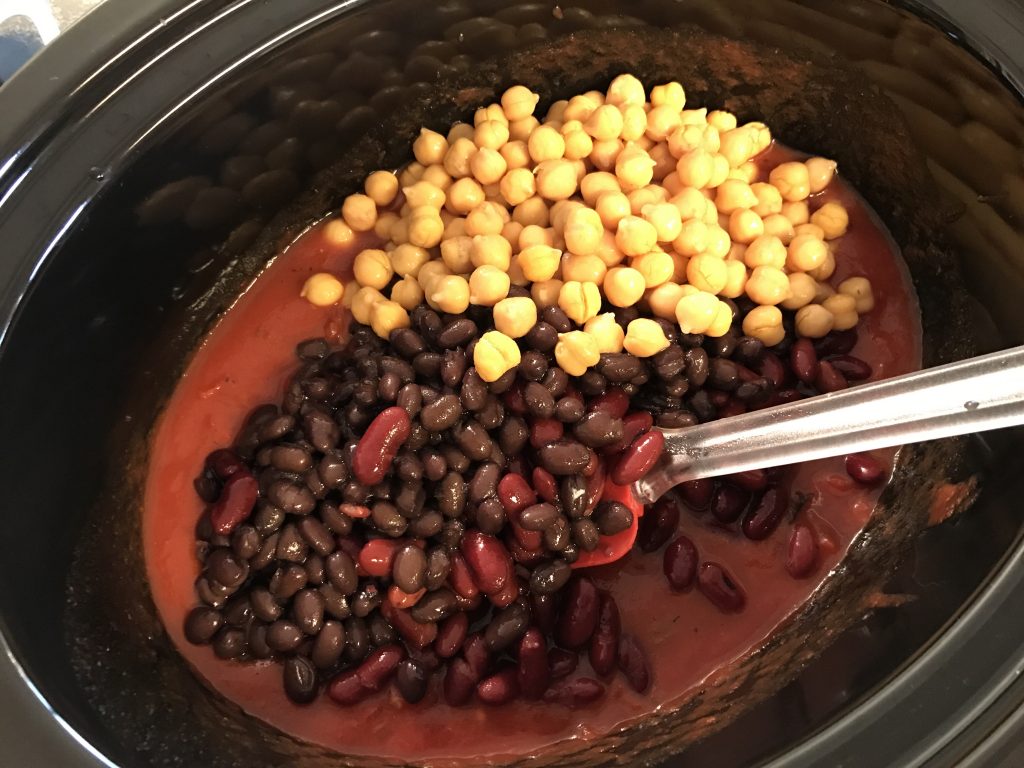 The recipe called for three different beans — one being chickpeas! So odd. But I went with it and it turned out to be a really good addition. I did black beans, red kidney beans and garbanzo beans. 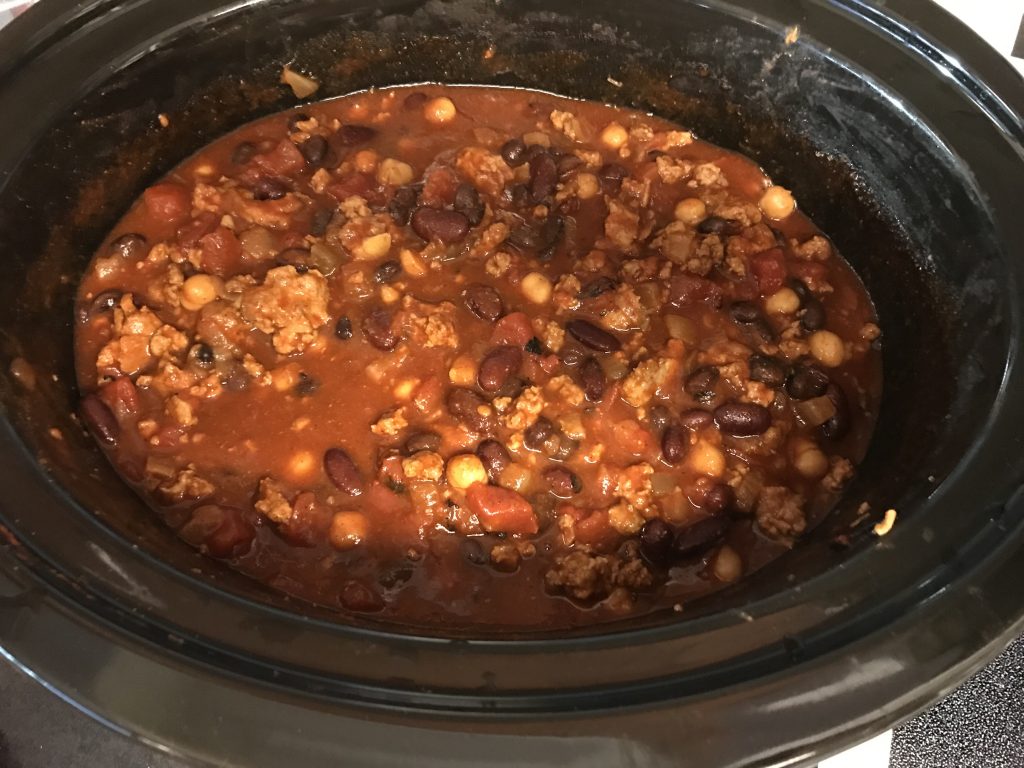 I mixed it all and it cooked in the crockpot all day. It smelled really good.

After lunch Logan took a nap and I decided to take a nap, too, and ended up sleeping for over 2 hours!! Catching up on sleep after four days of no sleep, was awesome.

When it was done cooking I packed everything up and we went to our friend’s house to take them dinner and meet the new baby! NEW BABY SMELL!! Oh my gosh the baby is sooo teeny tiny and adorable. I cannot believe that Logan was ever that tiny. It’s crazy. (Especially considering Logan decided to walk this week.)

So for the meal train I took our friends the pot of chili, a loaf of French bread and all the toppings: cilantro, chopped red onion, green onion, shredded cheese, avocado and sour cream (for the kiddos who aren’t dairy-free). Also in the bag was a bottle of wine and some homemade gluten-free brownies (from Bob’s Red Mill). 😀

We spent a little bit of time catching up and snuggling with new baby and then went home to get Logan to bed and open a bottle of wine for us: 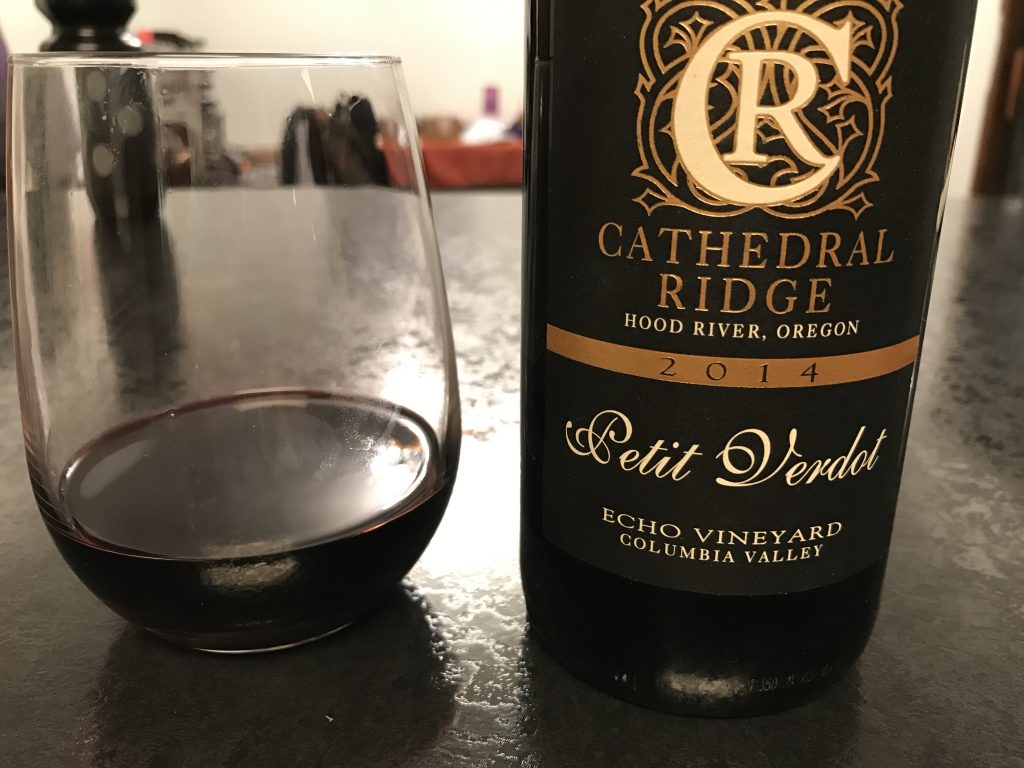 There was just enough chili left over for Michael and I to have dinner, too. My one complaint about the recipe was that it said there were 10 servings in there but really, it was more like 5 or 6 generous servings. I guess she made the servings small to keep the calories low. 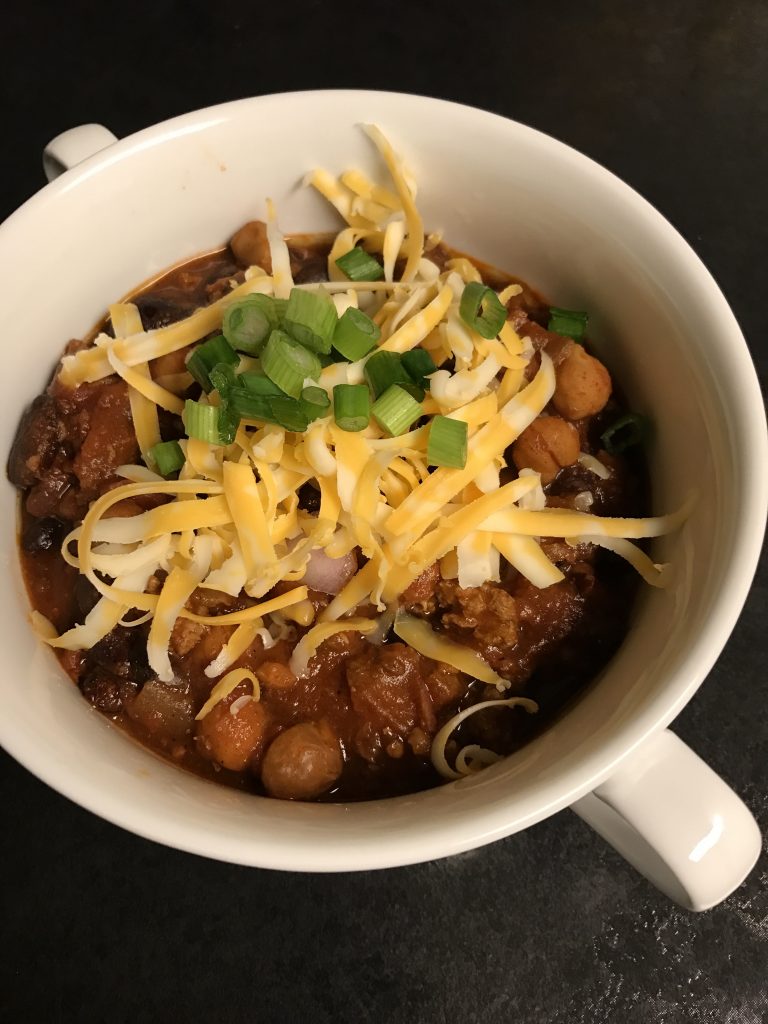 Ok I kind of loved this chili. It was so good! Lots of flavor and texture. I enjoyed the chickpeas, too. At first I thought they were weird to add to chili but the texture was great. The beans weren’t mushy. 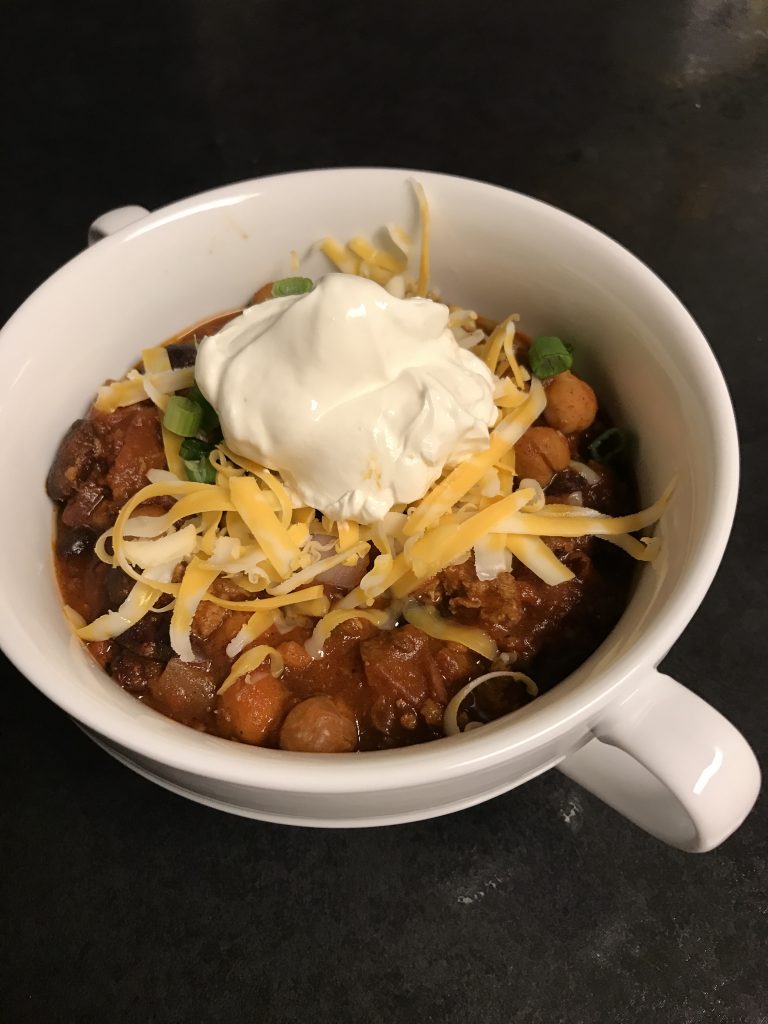 This recipe is a winner! I would make it again for sure.

On Sunday I went swimming and then Michael and I got to go out for a Valentine’s Date Day. Michael’s sister babysat this guy: 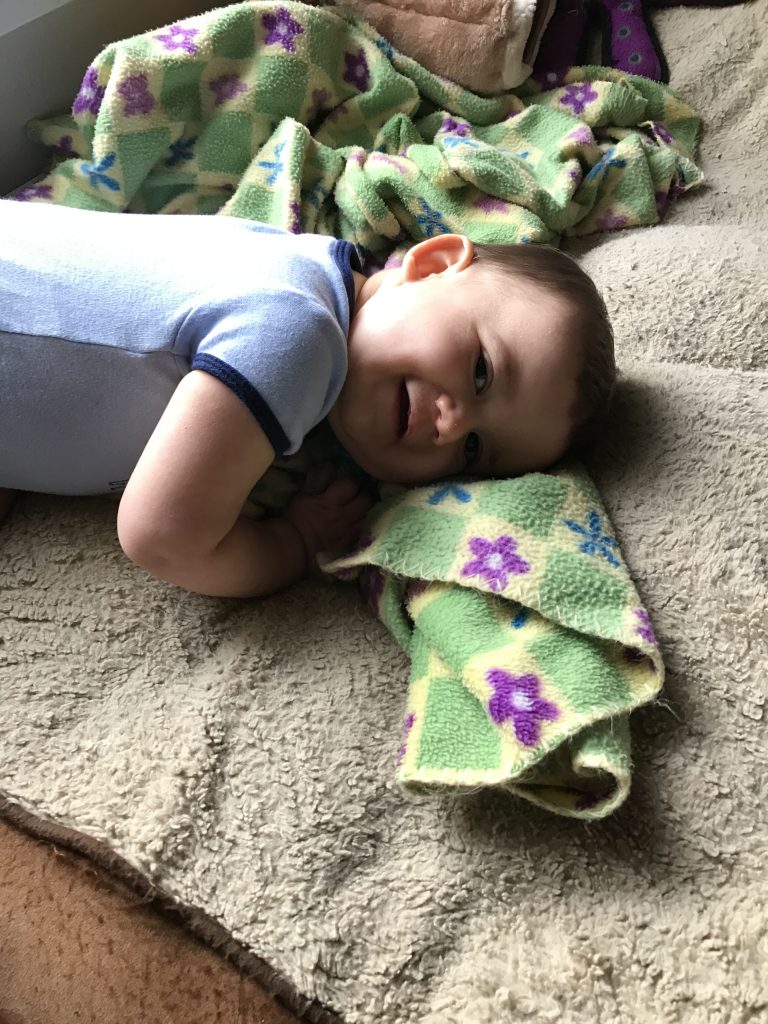 I planned our date for this month. Our date started with lunch. We went to Ten Barrel Brewery. I’ve never been and it was a cool place with a fun vibe. We both got the Pearl IPA. 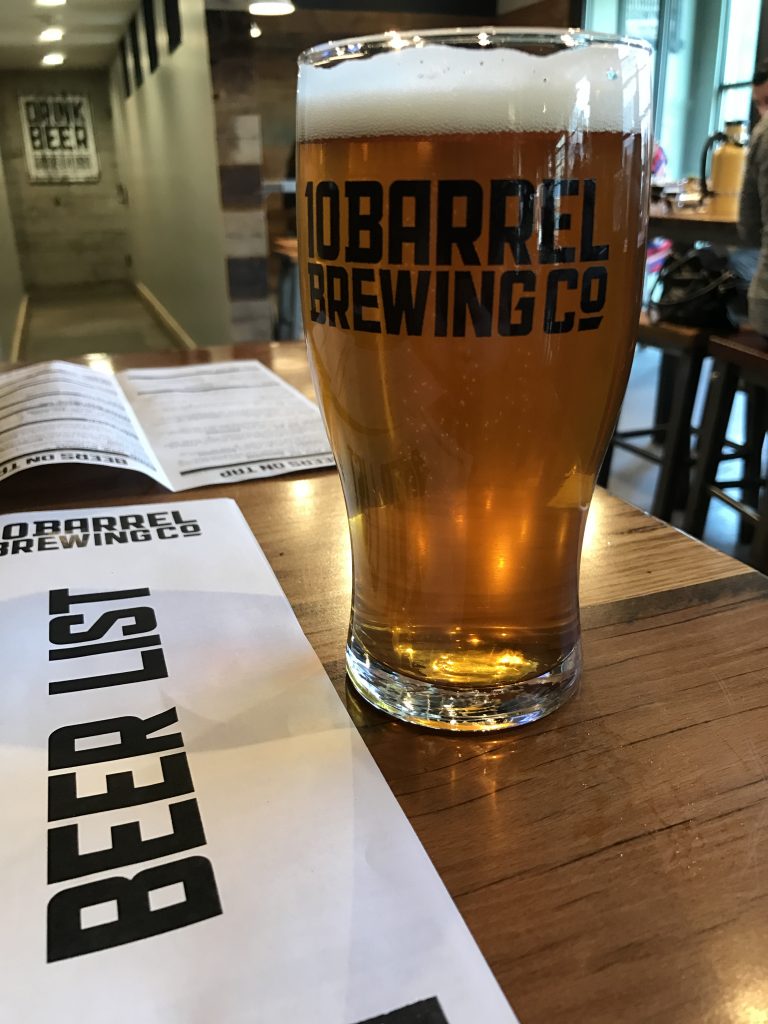 It was a pretty decent beer.

Michael got the personal sized pizza and the salad lunch combo: 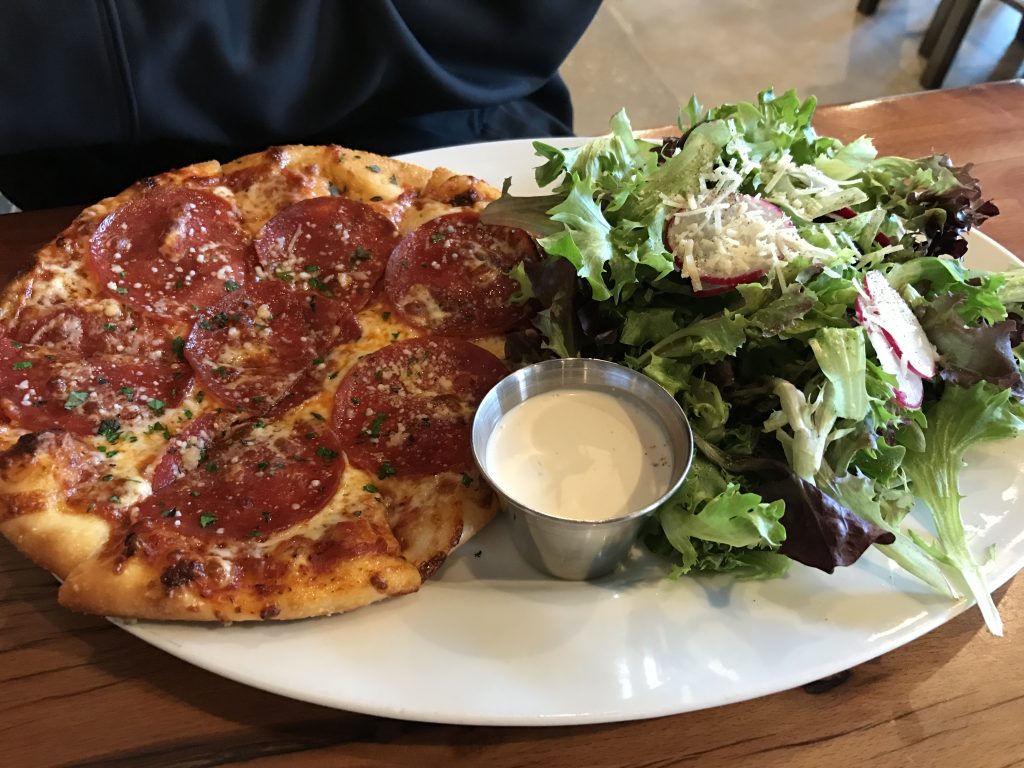 The crust wasn’t anything special but the flavor of the sauce and the spicy pepperoni were really tasty. I got the Seoul Sandwich which had Korean steak with sauce, pickled carrots and shredded cabbage on it. It was really, really tasty! The meat had a fabulous flavor to it. I would have liked it a little spicier but it was a really delicious meal otherwise. 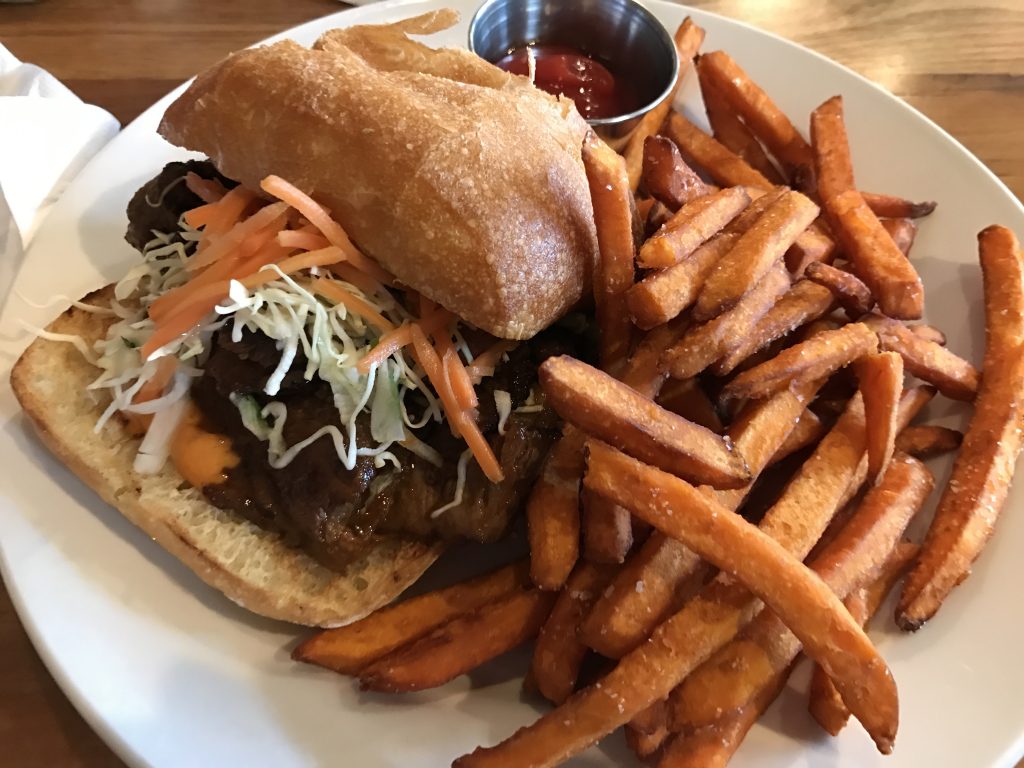 Next up was the highlight of our date day: A mini spa day! We went to Sole 2 Sole Reflexology in North Portland. I didn’t know what to expect because I’ve never tried reflexology before.

It was such a good experience! We both LOVED it! We were in a semi-private back room with two chairs. We sat down in our side-by-side chairs and then we soaked our feet in barrels of hot water while the therapists massaged our arms and hands. They also put some hot neck wrap things on us. Those were nice.

Then they dried our feet and started the foot and leg massage and reflexology. It was SO GOOD! I get massages once a month (thank you insurance) but they rarely spend that much time on my legs or feet, which is a bummer. So this was a really nice treat because it was a full hour on your feet and legs!

The reflexology part was really interesting. Hard to describe, but nice. It was a lot of pressure-point massage and the massage therapist did some massage around my knees, which was really nice.

Michael fell asleep. 🙂 I dozed in and out of very deep relaxation. It was so nice. The place was great and I would totally go back again. Michael enjoyed his surprise Valentine’s date and he said had he’d known what I had planned he would have run extra miles on Saturday to really get the full benefit of the massage. 😉

It was a great date and we went home to be with the baby and just hang out for the rest of Sunday. Kinda lazy, which was nice.