Eating out is often difficult for me because my eyes get bigger than my stomach and I am easily tempted by the things that sounds good on the menu. When I know where I’m going out to eat, I will look up the menu online and pick what sounds the healthiest to me. I may not always choose that, but I like to have a game plan. My go-to restaurant “healthy” choice is usually the soup and salad combo; it’s a safe choice.

But with sushi, I don’t get that same anxiety about choosing the wrong thing. Part of the reason is that I think sushi is really healthy. IF you order the right things. The biggest tip for sushi: don’t order tempura! Deep frying anything immediately makes it not a healthy choice (even though the tempura is oh-so good).

I found a website recently with a chart for calories in sushi. The calories run from 50 calories to 700 calories. Just to give you a few examples:

Sashimi is usually under 100 calories!

One of the good things about sushi restaurants? You are usually sharing the rolls with your friends! So you’re probably eating even less calories than you think. I rarely feel guilty about eating sushi because fish is so healthy and packed with omega-3 fatty acids. 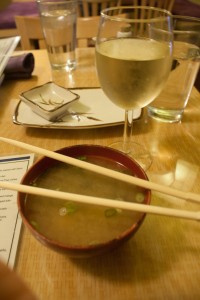 A tip that I have for sushi restaurants is to get an appetizer first. The edamame (soy beans) lightly salted run around 100 calories. Miso soup is less than 100 calories for a small bowl. Both take the edge off the hunger. Also, if you’re not that skilled with chopsticks, it will take you forever to eat your sushi! 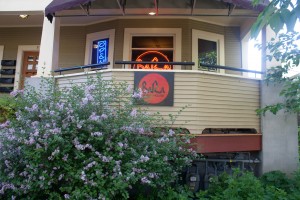 I recently met up with my cousin Anna for our monthly/bi-weekly-girl’s-night-out-happy-hour at Bara Sushi House. It’s in SE Portland on the trendy Clinton Street. I’ve been there for dinner at least three or four times and have always had a good meal there. Another bonus: I had a Groupon deal that covered a bulk of our dinner. 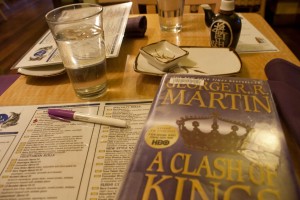 It was a Thursday evening after a gorgeous week in Portland with weather that was sunny and warm and a reminder of why I live in the Pacific NW. I wished that the sushi place had outdoor seating. I got there early and read some of my book while I waited for Anna to get there. I had a small cup of Miso soup while I waited for her to arrive. She arrived and ordered sake and I had a glass of dry chardonnay. We ordered some really tasty  sushi rolls, some were ones I’ve never tried before. 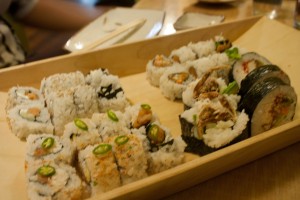 We shared a Philly Roll (my favorite) and a Spicy Salmon Roll (Cucumber, kaiware, and yamagobo). Then we got two rolls that were more adventurous; the Tropical Punch was spicy as hell–as in my lips and mouth are burning spicy–but in a really good way. The Tropical Punch: Spicy albacore, house crab mix, mango and Thai chilies. And we got a Spider Roll (which was just two pieces): Fried soft-shell crab, house crab mix, tobiko, cucumber, avocado, yamagobo and kaiware.

We were both super happy with our choices and I felt like the calorie count was fairly decent. Miso Soup -50 calories; Spicy Salmon -330 calories; Tropical -297 calories; Spider Roll -317 calories for 4 pieces but I had 1 piece; Philly Roll -320 calories.  So splitting all the sushi, how did I do on calories? I estimated 675. That isn’t too bad for a dinner out!

Whatever calories I saved by eating sushi I made up for at Pix for dessert! It’s a super cute, delicious dessert place just up the street from the sushi restaurant.  We ordered the Amelie– it was creme brulee with a hint of orange, chocolate mousse with a crunchy chocolate outer glaze and caramelized hazelnuts. 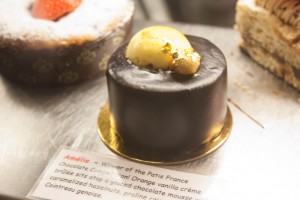 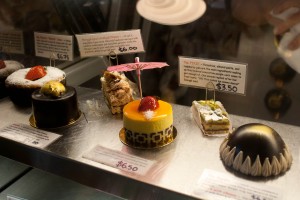 Thank goodness we split it! It was rich and decadent and I absolutely loved the crunchy hazelnuts in it. 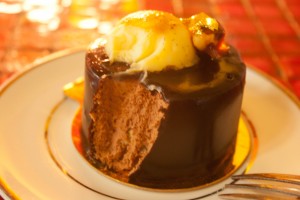 Splitting it was a good move; I think we each had about five bites before it was gone. Hopefully I didn’t do too much damage to my waistline with that little treat. 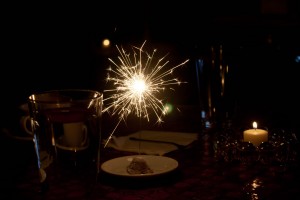 One last thing, I never step on the scale the day after eating sushi. Don’t torture yourself. That soy sauce will add a few pounds to anyone!

QUESTION: Are you a sushi fan? What do you usually order and how many calories are in it?