Saturday I awoke to a yellow, glowing hazy outside. The light was very weird, abnormal, and I couldn’t figure out why until I went outside. Then I realized it was all the wildfires in Oregon. Apparently the wind shifted and Portland was engulfed in a haze. It was gross, smelly and hard for me to breathe. Thankfully I already had plans to go to the gym and not try to run outside or go for a hike. I don’t see hiking in the future until the air quality clears up.

It was the first time I was back at lifting weights since my back injury. I took it easy and focused on things like shoulders, triceps and core instead of my back. I was back at doing my PT exercises and glute/core work. It felt good to do it again. Then I did a walk/run on the treadmill. First run since my 5k! I felt pretty good and did 2.5 miles. 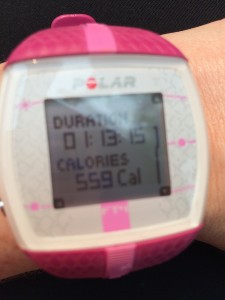 I burned 559 calories, went home to clean up and have lunch (leftover turkey enchiladas I made). Saturday I spent most of the day inside to avoid the smoke!

Saturday evening we went to a friend’s house for dinner. It was so good to see them! And to get out of the house and be social. After my back stuff I kind of hid in the house for awhile. I was tired, feeling wounded and a little bit mopey I think. I didn’t do much socializing (aside from our parents visiting) so once I was starting to feel more like myself I was glad to see some friends.

They made delicious margaritas from scratch (limeade, rhubarb compote, simple syrup, lime verbena juice and ice). So delicious and refreshing!! Mine was a virgin because me and Tequila AIN’T friends. No thank you! 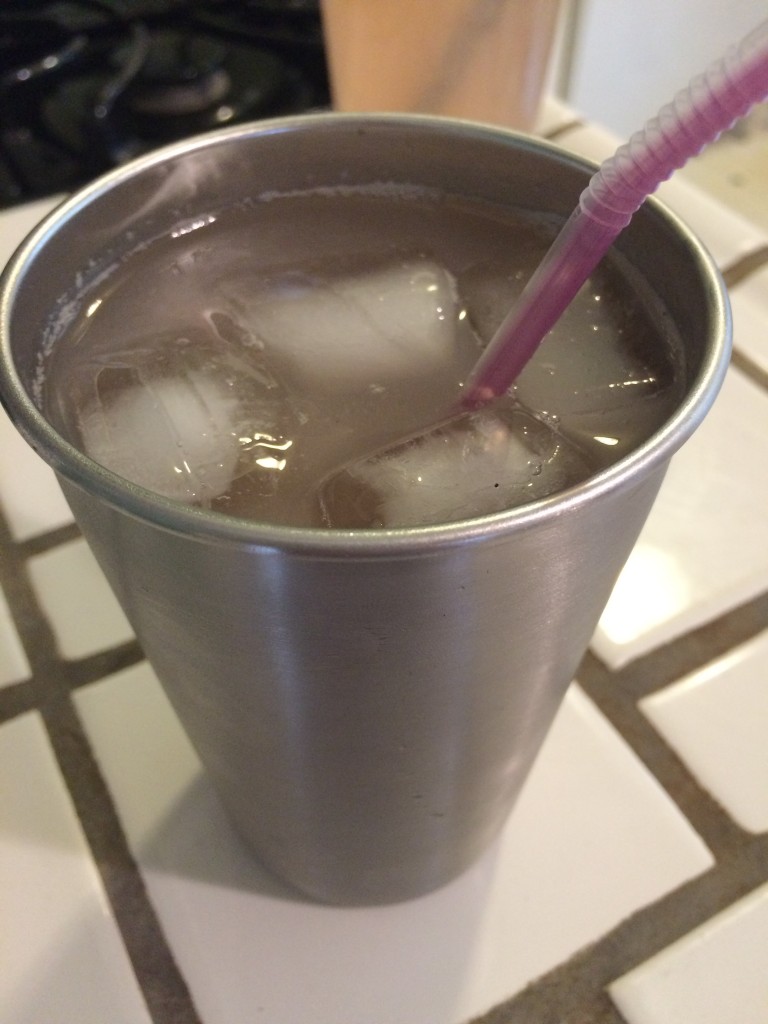 Dinner was grilled chicken, corn on the cob and a delicious salad with greens, mint, feta, onions and watermelon. 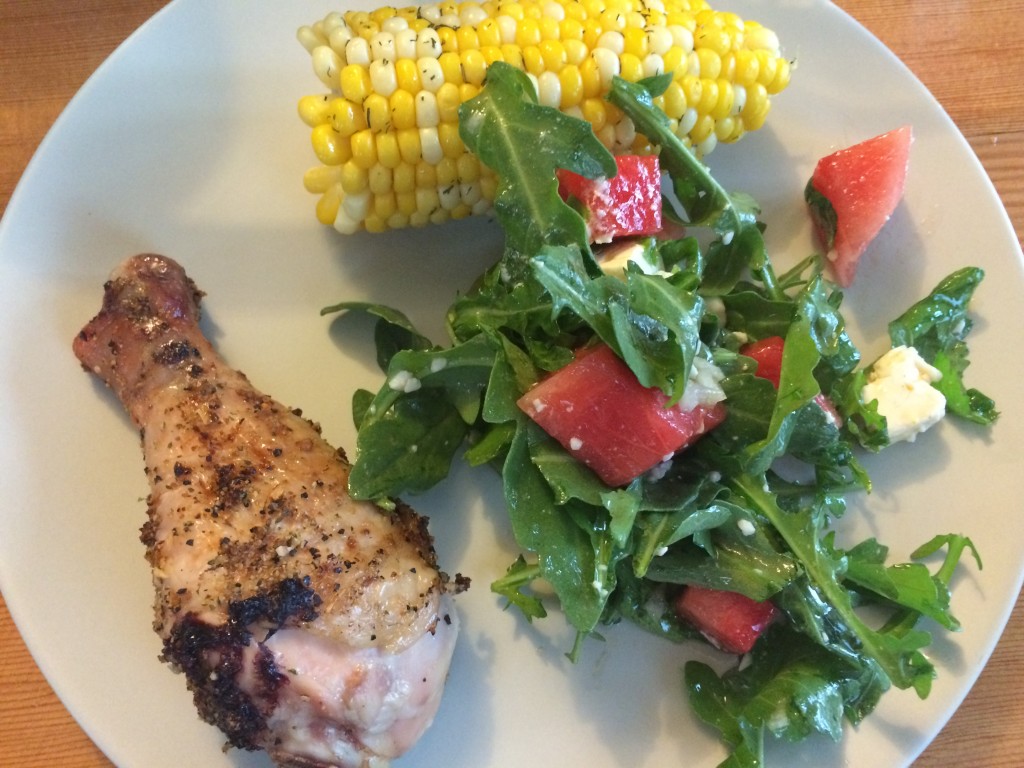 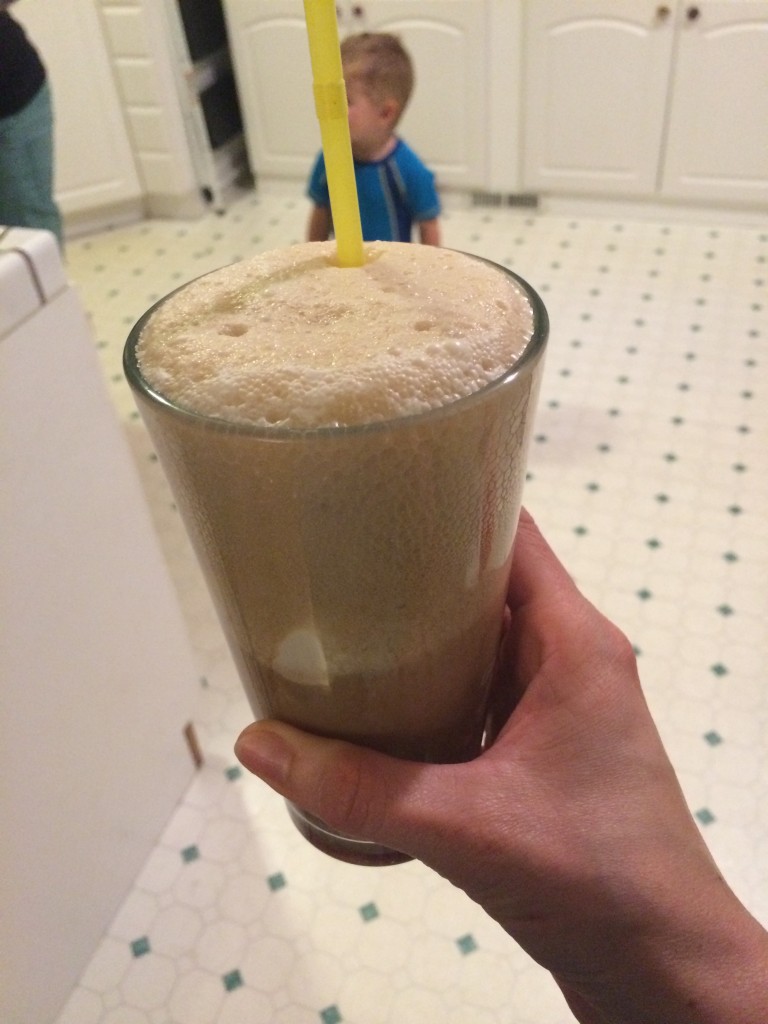 It was a fun night. The kids are getting so big.

Michael made french toast for breakfast. It was quite a treat. I hadn’t had french toast in I don’t know how long…at least a year. I’ve been craving it recently and Michael kindly satisfied my craving. He made the fabulous Martha Stewart recipe (it’s a winner for sure). 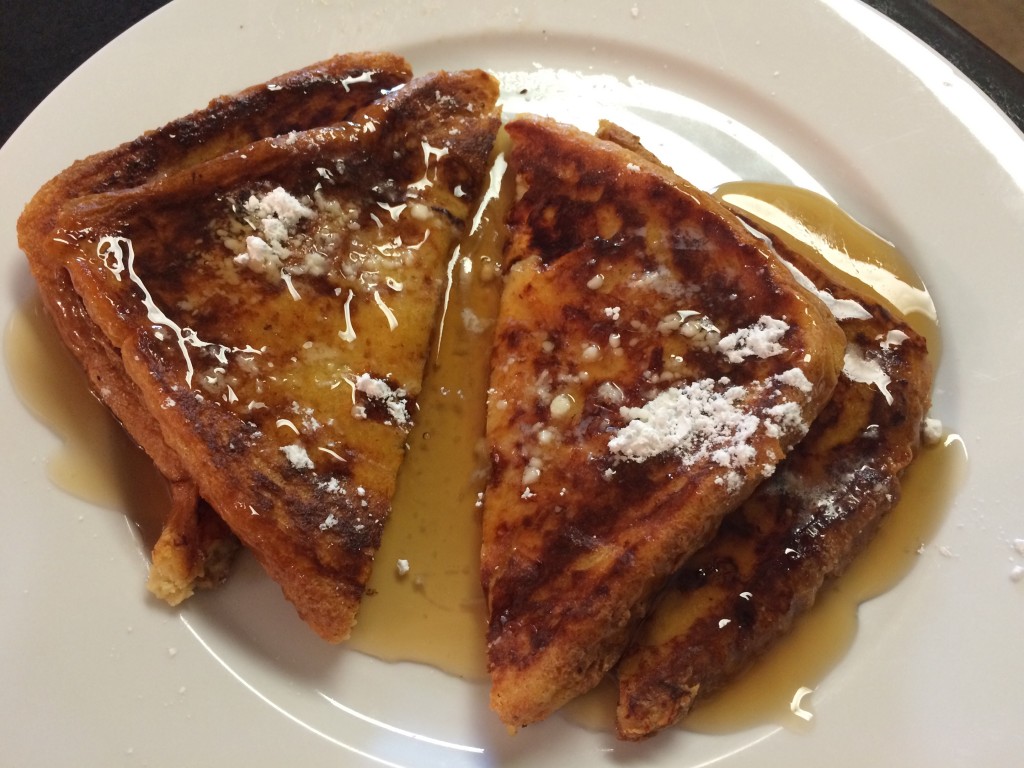 After breakfast I went to the gym. It was too late for yoga class and honestly I was a bit too sore for it I think. Those jump squats always do me in. I was so sore (hamstrings) from Saturday’s workout. Instead I used the elliptical for a mild workout. 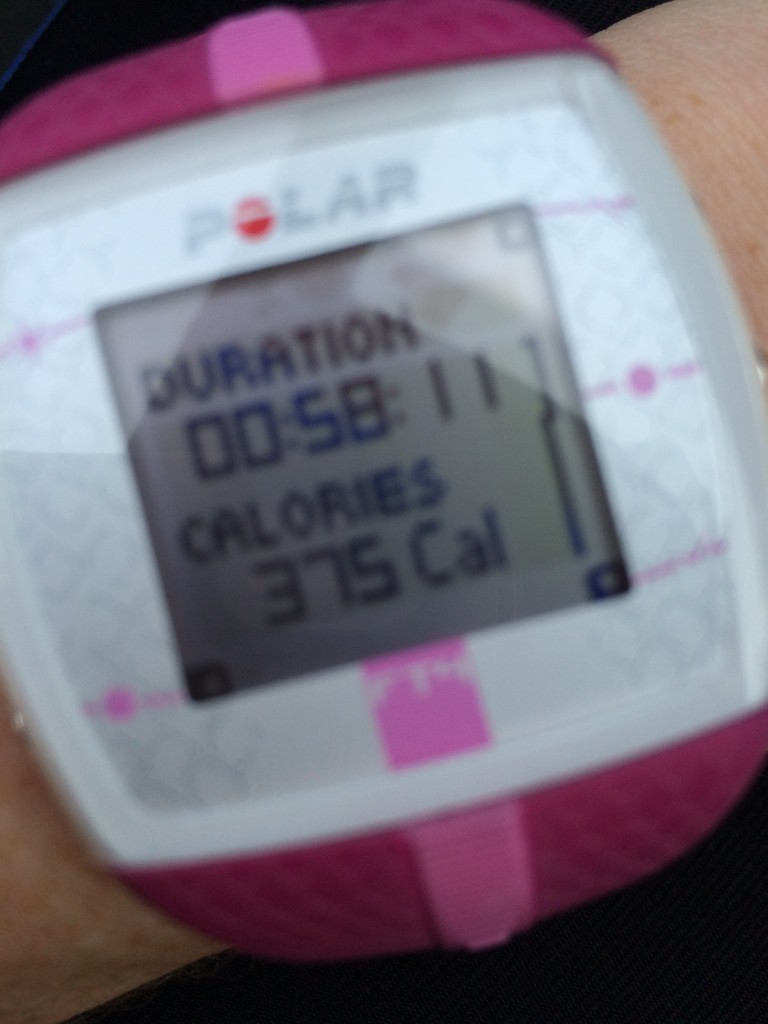 Sometimes doing something like the elliptical can help loosen up the sore muscles. Time will tell. The afternoon was spent in the kitchen working on tomatoes from the garden. I decided to can whole tomatoes. I had so many ripe ones in the garden that needed to be cooked or something. I picked a big batch and got started. 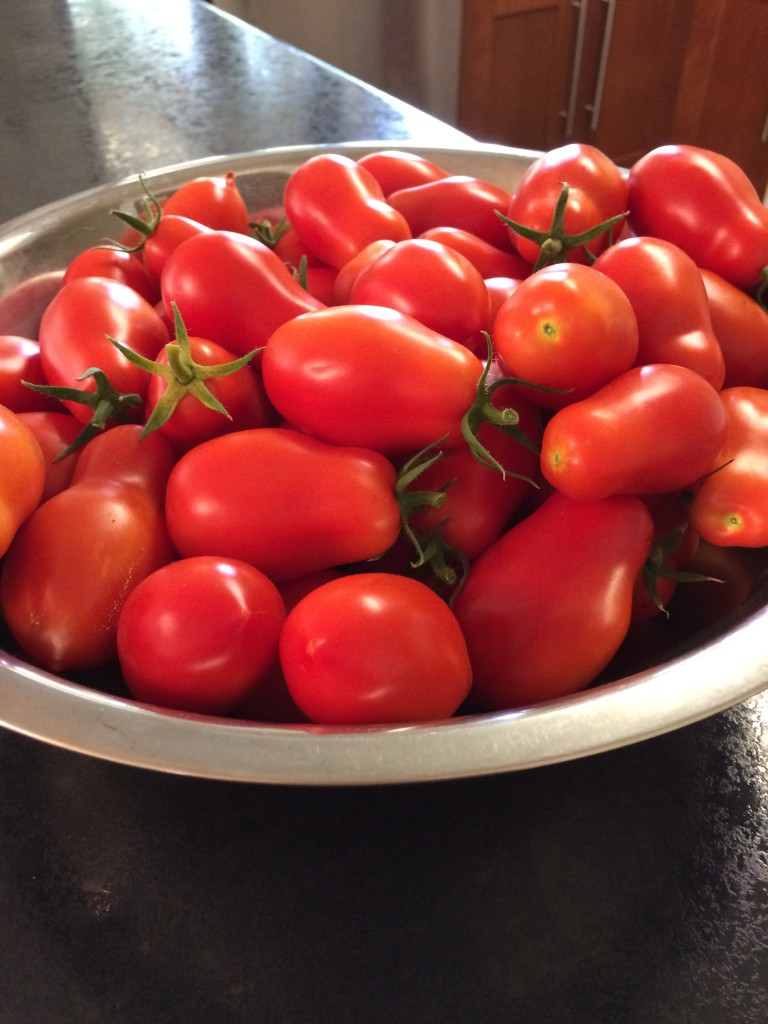 I did a combo of romas and heirloom tomatoes. I love canning whole tomatoes because it’s super easy and fast. I boiled the tomatoes, peeled the skins in no time, cored the tomatoes and then canned them whole. The longest part of this process was the canning part. It took forever to get the water boiling and I had to do the jars in two batches because my pot wasn’t big enough.

Sunday evening we had Michael’s mom and stepdad over for dinner. It had been way too long since we saw them and I was excited to make dinner using the spaghetti sauce I made last weekend. Michael’s mom made a fantastic salad with greens, tomatoes and lemon cucumbers from their neighbor’s garden. I baked a loaf of garlic bread (my weakness). 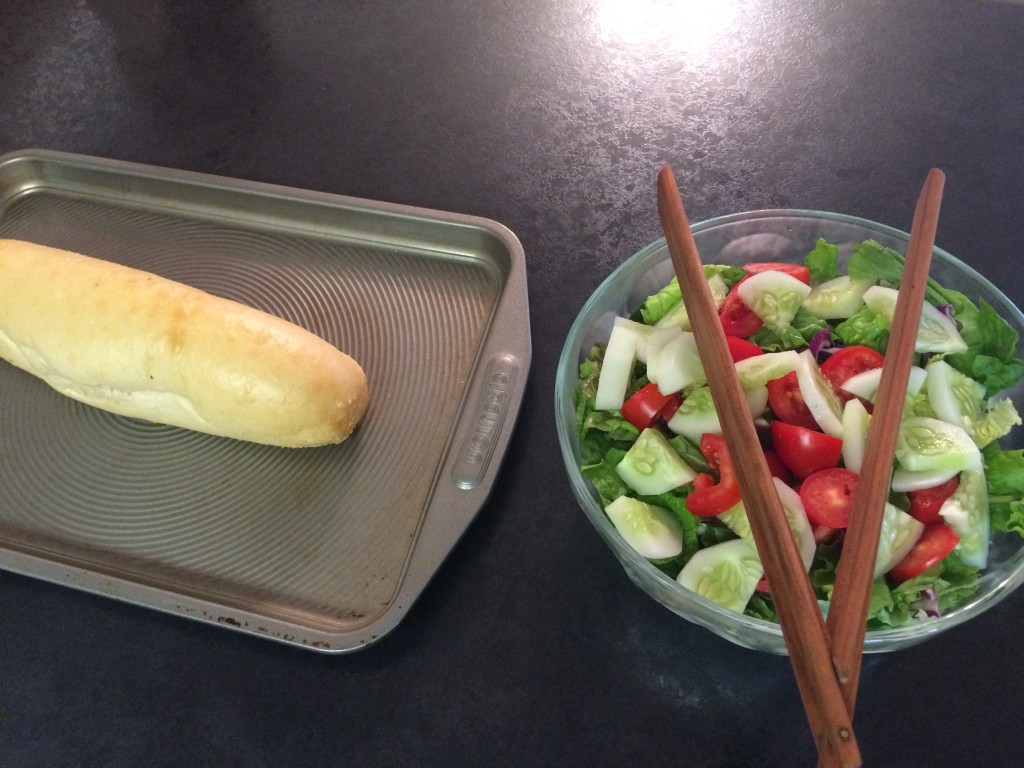 We did gluten free spaghetti and I cooked up my spaghetti sauce with meatballs. I was so happy with my sauce! It was delicious! Thick and flavorful and just right. 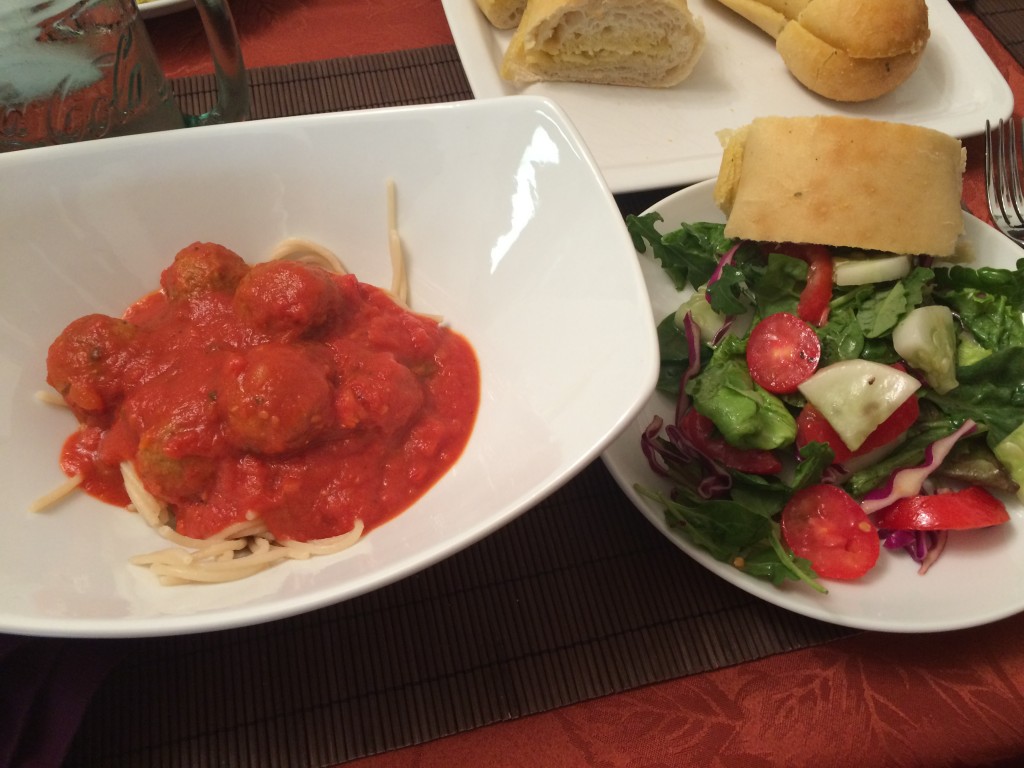 Dessert was a little bit of a cheat. 🙂 I baked cookies. 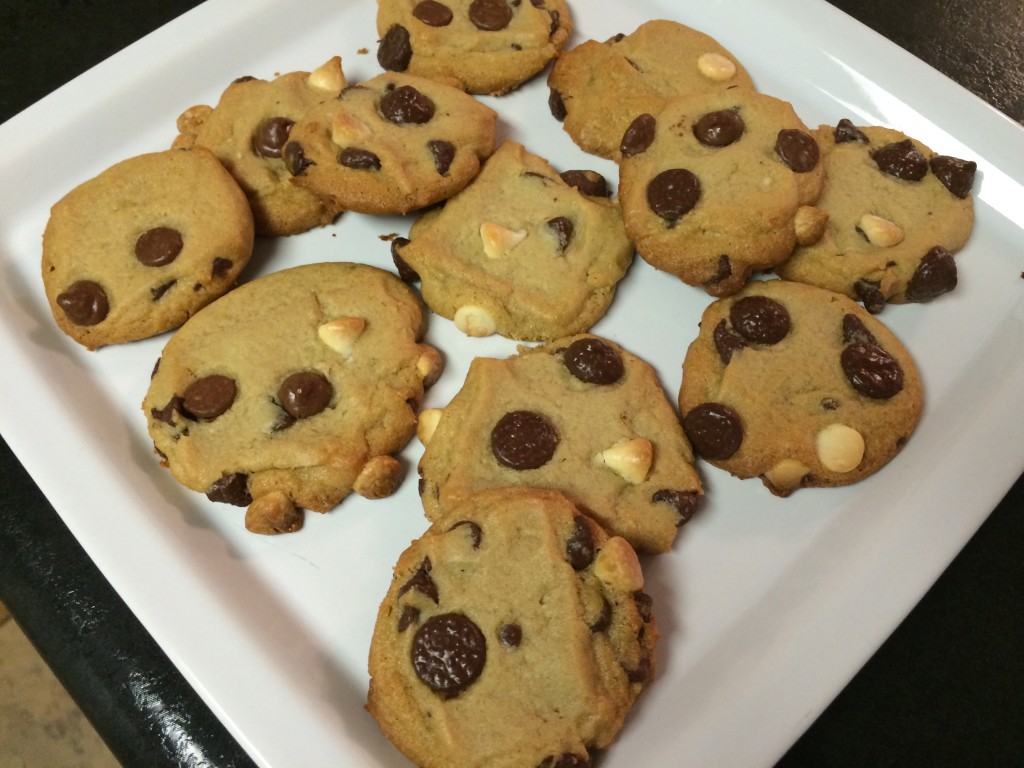 It was a busy weekend! But a good one. How was yours?

A Big Mouthful of Poison