Michael and I are definitely not traditional in a lot of ways. In the past we sometimes skipped Thanksgiving all together. The first Thanksgiving we celebrated together we ate pork chops with mashed potatoes and asparagus. Not exactly traditional, right?

Last year we actually hosted a real Thanksgiving dinner. It was our first. I am really happy about our first bird and we made some really nice dishes that were healthier alternatives to the “norm.” For example, we sauteed green beans and zucchini instead of making the high calories green bean casserole. It was good! 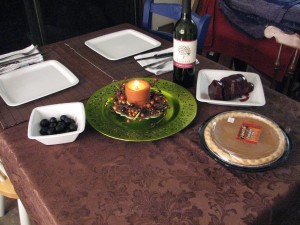 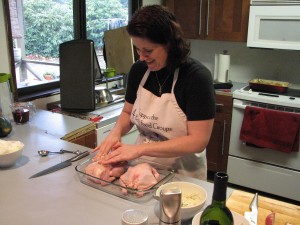 I had a nice day: I slept in and went to the gym (where it wasn’t crowded, shocker) and then started cooking. First, I made the same stuffing we had last year–a Cornbread Stuffing–that is amazing. I added a handful of cashews to the stuffing to make it fantastic!

1 can cream of chicken soup

Directions- Melt butter in skillet and cook onion and celery until barely tender. Set aside with cooked sausage. In a bowl, combine cornbread, bread crumbs and seasonings, then stir in the milk and chicken soup. Add onion, celery and sausage, mix it up. Bake in a casserole dish at 325 degrees for 25 minutes.

I used leftover Texas Toast from the French Toast we made a few weeks ago, and leftover baguette from the dinner party. 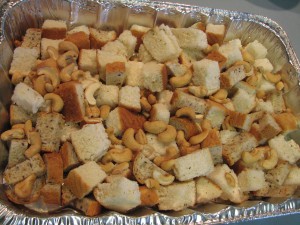 They worked great and I used up stale leftovers! And several cans from the pantry. I made a quickie cornbread, from a box shuddddder! for the stuffing. 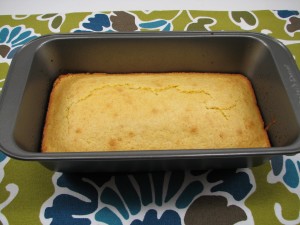 Nope, we didn’t do a turkey. I’d had some Cornish Game Hens in the freezer for a few months and I decided that they would work perfectly for an alternative Thanksgiving. I defrosted them both in the fridge for a few days and when Thursday came around they were ready. 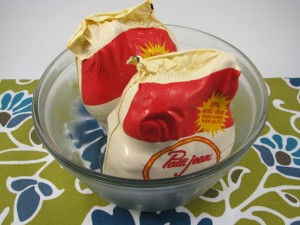 I wanted to try out a recipe I found for turkey that sounded amazing: Roasted Turkey with Herb Butter and Roasted Shallots. 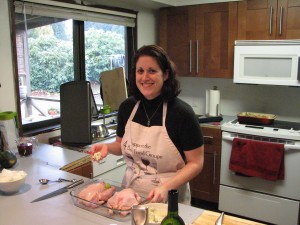 I adapted that recipe for the Cornish Game Hens and it turned out wonderfully.

Shallots, peeled and cut in half through the root

1 large celery stalk, cut in half

Preheat oven to 350 degrees. Mix together the butter and herbs. Wash and dry the Hens. Season cavity with salt and pepper and then stuff with carrot and celery. Smother the Hens with the butter herb concoction. Place Hens in roasting pan with shallots and onions.

Roast for 1.25 hours or 1.5 hours depending on the size of the Hens. Every 20-30 minutes baste them with the broth. The hens are done when the sauces run clear. Remove carrot and celery and discard. Serve. 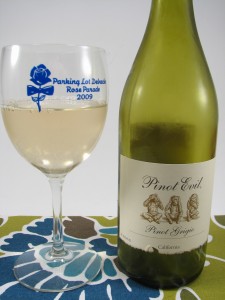 It was difficult to get the butter to stick to the skin of the Hens. Eventually I gave up and used two knives to kind of spread it around. I did the best I could and flipped them over and did the other side. 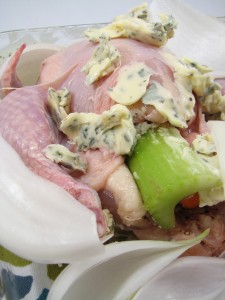 I basted them every 20 minutes. I used vegetable broth because that’s what was leftover in the fridge. It worked great. 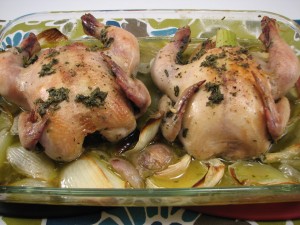 During the last 30 minutes of the Hens cooking, I added the stuffing to cook. I picked up an organic turkey gravy from the store for $2 (because Michael hates gravy and I’m so not picky). It turned out that one Cornish Game Hen was plenty for two of us to split, but that’s ok–we have leftovers now. 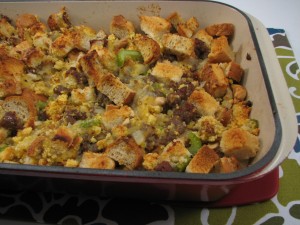 The Cornish Game Hens turned out lovely! I am so glad I tried the herb recipe because the flavors were delicate and delicious. The hens were a lot juicier than regular chicken ever is. 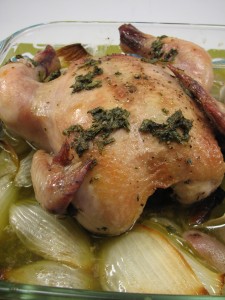 Michael “carved” the bird for dinner. 🙂 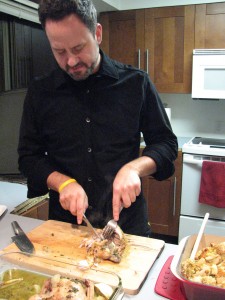 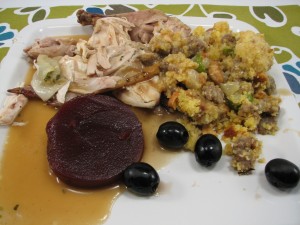 And of course, for dessert: you gotta have pumpkin pie. 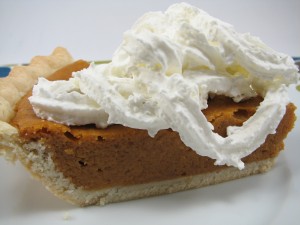 All of the food turned out really delicious. And while it wasn’t really traditional, it was still warm and happy. I’m glad all the recipes I did turned out and I’m happy I got to spend it with Michael. I didn’t go crazy with my portions and I’m happy with my choices. I’d say Thanksgiving was a success!

QUESTION: What was the highlight of your holiday?