Recently I went out to lunch with some coworkers to celebrate another coworker’s birthday. It was a different kind of birthday celebration, more a memorial. Some of you long term readers might remember last August, my office experienced some tragedy. It was a really sad, dark time and no one should ever have to attend two funerals in one day. But this post is not about sadness, it’s about food!

So to celebrate Flo’s birthday, we all went out to lunch to her favorite place, Rock Bottom Brewery in downtown Portland. It was a nice way to kind of honor her memory. It’s still weird not having her in the office and I think we all think about her pretty frequently still. 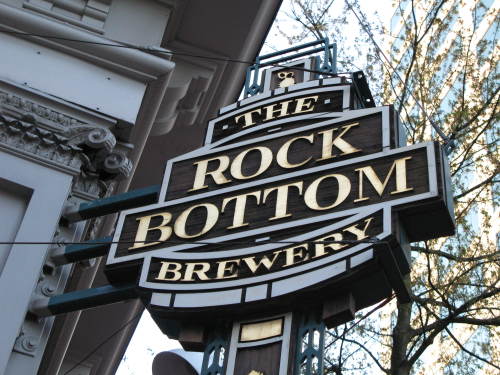 Anyways, back to the food. I rarely eat at chain restaurants. Michael and I are kind of foodies and love trying new (or new to us) restaurants. Portland has a fantastic food scene, many restaurants boasting Michelin chefs, so it’s fun exploring that. In preparation for going out to lunch, I checked out the Rock Bottom menu online to see what they had. This is the norm for me. I like going into a restaurant prepared. This doesn’t mean I always go with the “healthier” option but I at least try.

I was happy to discover that this place offered nutritional stats for all their food! You have no idea how exciting that was (I know, I live an exciting life). It’s just rare that I get to know ahead of time actual stats.

I’d already decided I was probably having a salad or soup. That’s what I was craving. I looked through their stats and was shocked. Here are a few of the ones I had considered getting:

Crikey! That’s too many calories for a salad. But guess what I discovered? Those calorie counts do NOT include salad dressing. There’s a whole section for that. And that section was really eye-opening.

I’m not sure how many ounces of dressing a typical salad has, but it’s probably not one. Counting calories is tricky enough, it’s even harder when you realize that you’re not counting correctly! I can’t tell you how many times I’ve been mislead by a tricky label that doesn’t clearly state it’s multiple servings, or restaurant foods with hidden add-on calories that I forget to count. It’s easy to miss these little things, but doing the best you can is better than throwing in the towel completely. 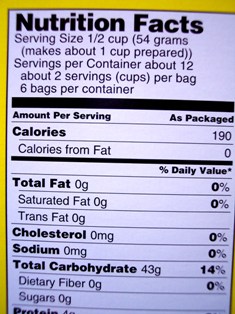 Being tricked by labels and servings is easy to do. Look at that above label. What the heck is it telling us? Can YOU figure out how many calories are in whatever that was? I sure can’t. I think I need to sit down with a calculator, a protractor and some graph paper to figure it out…

I ended up ordering the soup of the day, creamy chicken with artichoke. It was fantastic! I am definitely a fan of creamy soups, which I know can tack on the calories but they are simply my favorite. The calories for a bowl of the soup was 183 calories according to their website. I rounded up and called it 220 just in case my hunch that they were a bit off was right. It also came with a roll. 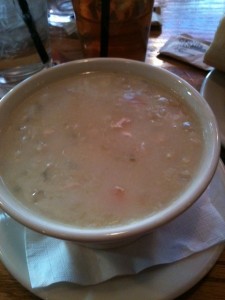 The soup was creamy and had carrots, artichoke and celery in it, too. I loved the flavor and creaminess. I definitely detected a heavy-hand with the salt, though. I’m really glad I ordered what I planned on ordering and I managed to stay within my calories for the meal.

A few of my coworkers ordered the Chicken Fried Chicken–it was Flo’s favorite thing. Fried chicken with mashed potatoes, gravy and coleslaw. It looked absolutely decadent. Another coworker got the nachos–which ended up being big enough for 5 people to share! Way too much food. (I realize this post is kind of all over the place, forgive me!) 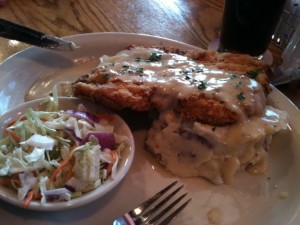 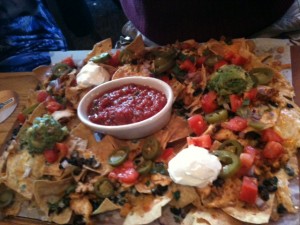 We reminisced about the old days and Flo. She would have been 56 this year. Her cancer took her really fast and it’s still weird that she’s gone. I was glad we could all get together to remember her and have a laugh about the old days.

QUESTION: Have you been tricked by deceiving labels before?

Friday was a bad day. I woke up with a headache and knew it would just get worse as the day proceeded. I had two funerals to go to on Friday. The first was at 11am for Flo, the coworker that died of cancer last week. The second was in the afternoon for another coworker’s daughter, Kayla, who passed away after being hit by a car.

All week I noticed that there was a lot of comfort food in the office. Thoughtful people brought in bagels, lots and lots of donuts and other treats. It seems that in times of sorrow and grief food is always the answer. I remember when my grandfather passed away–there were tons of casseroles and potluck food at my grandma’s house. I suppose in times of grief people don’t want to cook. They don’t want to make the decision of “what should we eat?” and then proceed to make it. They probably don’t want to go grocery shopping. In these times of grief, pre-made food can be a comfort. And you know that the kind people dropping off the dishes are only bringing the best of their best recipes.

Flo’s funeral was grand and beautiful. I wasn’t going to view the body but when I got there and saw the shiny silver and black coffin I decided to look. I’m really glad I did because her daughters transformed her back into the “Old Flo”–not the Flo I saw two months ago that was 100 pounds lighter because of cancer. Nope, she looked beautiful. Her purple eyeshadow looked exactly the way she would have done it. The wig on her head looked exactly the way her real hair used to look–short and black sculpted hair with a purple streak through it. Her nails were done perfectly–long and decorated. I sat by a dear friend during the emotional service. I am grateful that he was there to hug me, that we could comfort each other. I’d forgotten that Flo was his cousin.

I’ve never been to a Baptist service before and it was quite the thing to see. The emotional outbursts, the audience participation, the cries to the heavens was a sight. And the fashion. Holy moly–Flo would have been proud to see her lovely “Brown Sugar” ladies looking so gorgeous. The shoes alone would have made Flo envious. The service was nice and an emotional tribute to a Queen. The family section of the church was staggeringly huge and it made me happy that so many people loved Flo and came to honor her. It was literally standing room only in the church. After about an hour and forty-five minutes I had sneak out early to get to the next service.

Because Flo’s service was so long, I had no time to stop home for lunch and hurriedly drove an hour to the next service. Kayla had just turned 12 when the accident happened and I knew her service would be the hardest one. The slideshows of her life were heartbreaking. Seeing my coworker with his daughter in home videos brought me to tears. After the service everyone went out to the football field to let go of hundreds of purple and blue balloons. 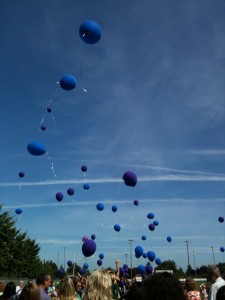 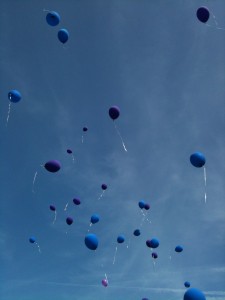 They tried to make it a celebration of Kayla’s life but in the end, it was saying goodbye to a kid who shouldn’t have died and it was heartbreaking.

In the past when grief struck me I turned to food. Always. I’ve mentioned before that I wasn’t a fat kid, or a fat teen really. I was a little chubby but not fat.

It wasn’t until I was 17 and my grandpa died that I turned to food to heal me. The year after he died was a fog of grief and candy. I’d buy the bags of Halloween candy and eat the whole bag. I was buying candy and chocolate and chocolate bars every day and eat them until the feelings went away. Then it became a habit. I was in the habit of eating food to feel better, the habit of eating candy every day. The habit was hard to break.

I calmed down for a few years, not having GOOD eating habits but I wasn’t gaining a lot of weight. Then a relationship ended and once again I turned to food to make me feel better. Thus continued my journey to 250+ pounds. Now? In times of grief where do I turn?

Exercise has been my go-to grief/stress/sadness healer for years now. Relationship ended? Work it out on the elliptical. Angry? Go for a run. Sad? Go swimming and leave it all in the pool. While some may think I’ve just substituted one addiction (food) for another (exercise) I don’t see it that way. I see it as a cleanser. I see it as working out the feelings in a positive way, instead of in a destructive way.

Friday was my normal swim day anyway. And I needed it more than ever. After Kayla’s service ended and I left my coworker to grieve with his family after we shared some hugs and tears, I headed straight to the pool. I.could.not.wait. The good thing about swimming when upset: if I cry no one can see me under the water. I got to the pool and swam one of the best swims of my life.

The second I hit the water I was going fast. I completed 3/4 of a mile (about 50 laps) in 22 minutes without stopping. I just kept going. The plan was to swim 1.5 miles but I ended up cutting it about 6 laps short of my goal because I had a time issue. For most of my swim my heart rate was in the high 150’s–unusual for my swimming–it’s usually in the 120’s. 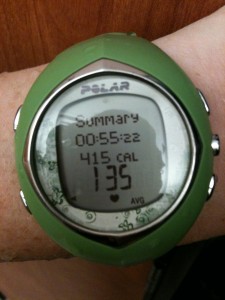 Michael and I had some plans for Friday night (which I’ll share soon) and it was a good distraction from the gut-wrenching day I’d had. Did I turned to food at all? Maybe a little bit. My friend from Flo’s funeral texted me saying “I’m definitely drinking tonight” and I responded with a big “ditto”. That was the plan. Just have a few glasses of wine and try to numb. That didn’t happen though. I really didn’t feel like drinking. On the way home from our evening, Michael wanted to stop at Krispie Kreme. 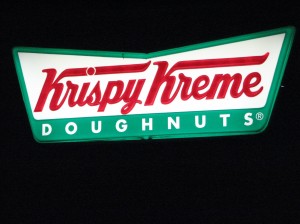 I was so tempted to just eat a bunch of donuts. What I was craving was ice cream. I gave in and got their kid’s size soft serve cone (I am shocked at the size of the “kid” size!) and happily licked my ice cream cone on the way home. 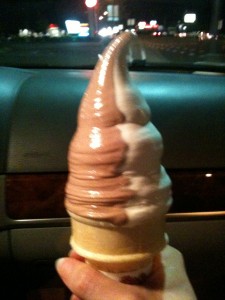 The ice cream cone did make me feel better. And that was the extent of my “turning to food” in times of grief. I think this was a testament to how far I’ve come from the Old Me and my Old Ways. Have your ways changed? Do you turn to food or exercise or something else entirely?

QUESTION: How do you deal with grief/anger/sadness/stress? Do you turn to food or something else?