On my bike ride home last Friday night after work, geared with ice cold water in one bottle and Gatorade in another bottle to beat the heat, I started to fantasize about dinner. Michael was going to be out that night and all I could think about was taking a cool shower after biking in 95 degree weather and eating something awesome. I was famished and craving something with peanut sauce. Don’t ask me where this random craving came from but once I was home, showered and comfortable in the air-conditioned house, I looked through the pantry to find some things I could use.

I decided to make a stir-fry. It’s been ages since I’ve had stir-fry and I love it because it’s simple and you can throw whatever you want in it. I started by making jasmine rice. While that was cooking, I gathered my ingredients. There was a leftover cooked chicken breast that I diced up. I minced some fresh garlic, cut some green onion and lined up the random jars I had: Thai Peanut Sauce, minced ginger, Sesame oil and sriracha. I had a bag of frozen veggie stir-fry mix in the freezer I quickly defrosted. It was something like snap peas, carrots, okra, mushrooms (which I picked out) and onions.

I dug out the wok I hadn’t used in ages and used the Sesame oil in the skillet. The one thing I remember from all those Top Chef-type shows I love was that you’re supposed to make the skillet or wok as hot as humanly possible before adding the ingredients and do it fast! So that’s what I did. There was some splattering of oil but it wasn’t too bad. 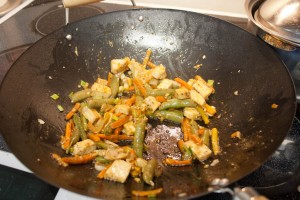 Looks like a mess but it was a beautiful mess.

I loved the flavors. Using two spoonfuls of the peanut sauce was just enough for this portion of food. There was a hint of the peanut but it wasn’t overpowering. I added some of the sriracha to it to add some heat. Next time I make this, I will use fresh veggies instead of the frozen that’s been hiding in my freezer for a year. 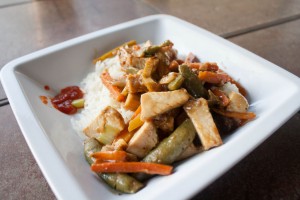 I would also chop up some real peanuts to add to the top of the dish. I think the crunch of real peanuts and not just the sauce would be a fantastic addition. I loved my dinner and I had one more serving left for lunch the next day. Perfect and fast. 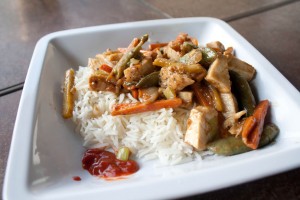 Since I opened that little jar of Thai Peanut sauce, I’ve been looking online to figure out other uses for it. I think my next experiment will be a chicken lettuce wrap with the peanut sauce. Totally looking forward to that.

Before I headed out to the Soap Box Derby the next day, I went for an early(ish) morning run outside. I’ve been stuck on the treadmill all summer when I run because I want to also get some kind of weight workout done too. It’s kind of a hassle to run outside in the neighborhood and then drive to the gym to lift weights but once in awhile that’s exactly what I do.

This particular run was really, really good. I gauge a good run by how often I have to take walk breaks, if I feel fast on my feet and if I don’t have any weird aches and pains. This run was one of the good ones. It was a cool morning, which was nice after the heat wave, and I just enjoyed running outside in the fresh air. I did take a few walk breaks to snack on some wild blackberries along the way. 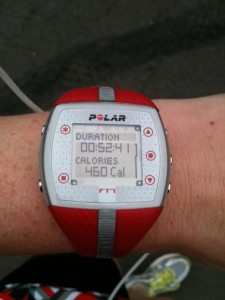 Then I hurried to the gym to get a good set in with the weights. I WOULD do it at home but the free weights I have are too light (5 and 10 pounds) and the kettlebells Michael has are too heavy (35 pounds). 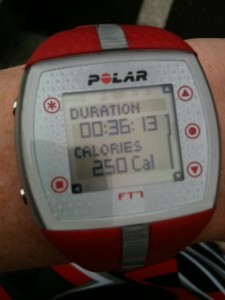 It felt good to work out with the weights AND run outside for a change. I cleaned up, ate my leftover stir-fry for lunch and met my friends at the Derby. When I woke up on Sunday morning I was in bad shape, though. Lots and lots of sore, stiff muscles. My legs were not happy with me. I think the combination of running outside (which is harder than a treadmill PLUS my neighborhood is very hilly) and lots of squats and lungs made me regret my workout a bit. It’s never fun when you wake up THAT sore…Off to the pool to stretch out those muscles. 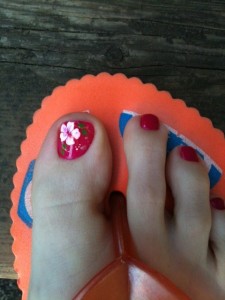 After my swim, I went to a friend’s house for lunch. She made her delicious tuna salad and put it on lettuce with lemon cucumbers and tomatoes fresh from her garden. It was a delicious lunch and then we treated ourselves to pedicures. I apologize for showing a picture of feet! I know some people get creeped out by that but I just had to show off the beautiful flower. Usually the art work doesn’t look that great on toenails but this girl was clearly gifted. She said she did some real art of her own on the side. Good for her. She’s obviously talented. And my pretty-flowered toes are ready for the beach!

QUESTION: What’s your favorite use for Peanut Sauce?