I really wanted to sleep in on Saturday…I rarely ever get to and this day was no different. My cat decided at 8am it was time to jump on me, walk on my head, prance around on my bladder and do circles around my body. Plus the sun was out and I could hear the birds chirping outside the window. It was supposed to be a nice day out! I went to the gym and did some weight lifting, followed up with a few miles on the elliptical. I know I should be taking advantage of the nice weather and be doing my workouts outside but…I wanted to lift weights. 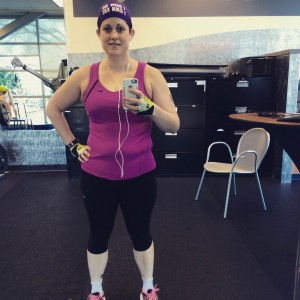 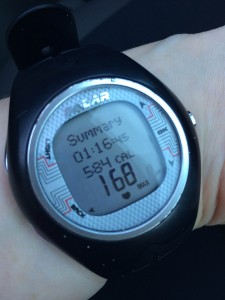 After the gym I got cleaned up and then Michael and I drove to Beaverton for lunch. It feels like it’s on the other side of the world from us. It kind of is. But we were going to visit a place that installs countertops and we wanted to see larger samples of them so we had to go to their store to do that. Michael decided to make an outing of it and took my to lunch at Gloria’s Secret Cafe. 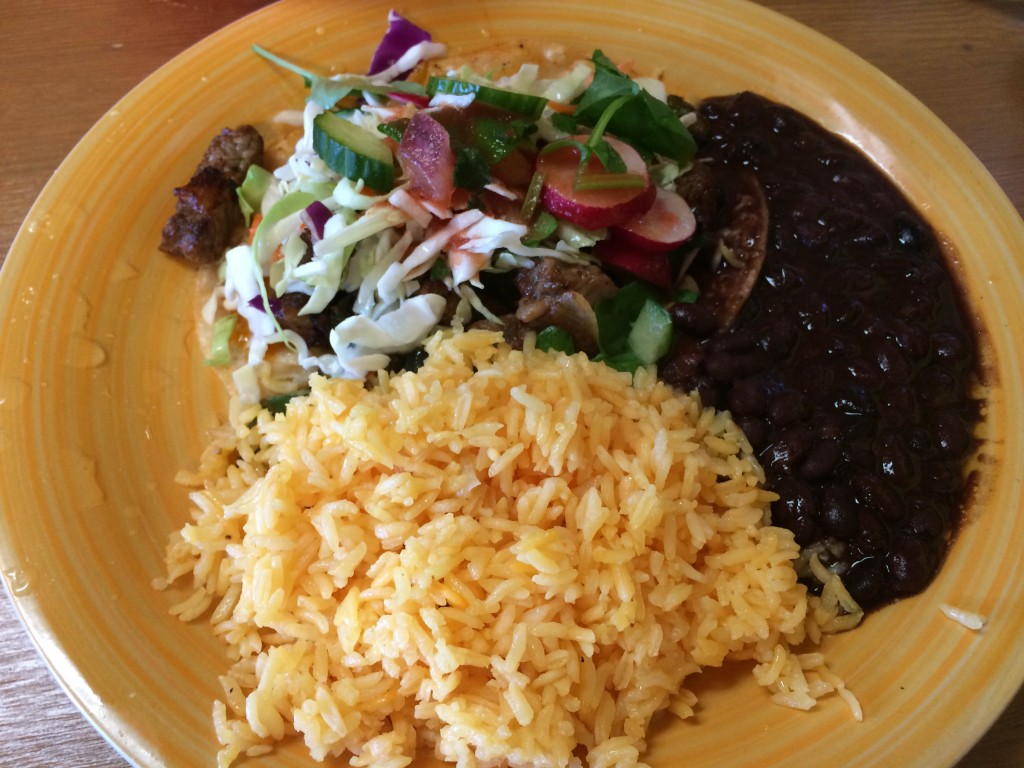 It’s a little hole in the wall Mexican restaurant (El Salvadorian, actually) that has maybe four tables in it. It’s seriously tiny. But oh my god was it GOOD. What a FIND! Gloria herself came out and greeted everyone at each table and asked how the food was. The food was spectacular. Michael got the carnitas taco special. I got the steak taco. Both came with saffron rice and beans. My taco was marinated meat in a sweet sauce topped with cabbage, radishes, spinach, cucumber and zucchini. The fresh veggies were an excellent texture and flavor with the steak. I cannot express just how delicious the food was! If you’re ever in Beaverton, Oregon, you must go to Gloria’s! The servings were perfect lunch size, not too big but just filling enough. 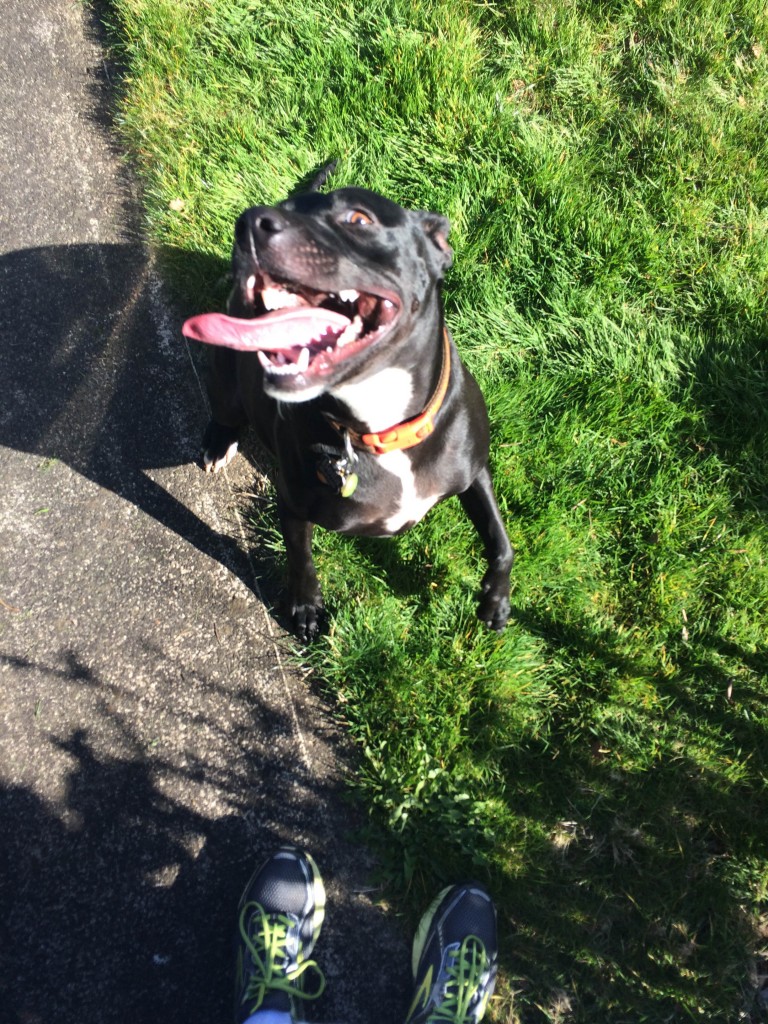 It was seriously so nice out! We took Bella for a super long walk when we got back from our errands and lunch. Michael wanted me to pick up something that we could grill because it was so nice out so I went grocery shopping and got some veggies and a pork tenderloin that was pre-seasoned. 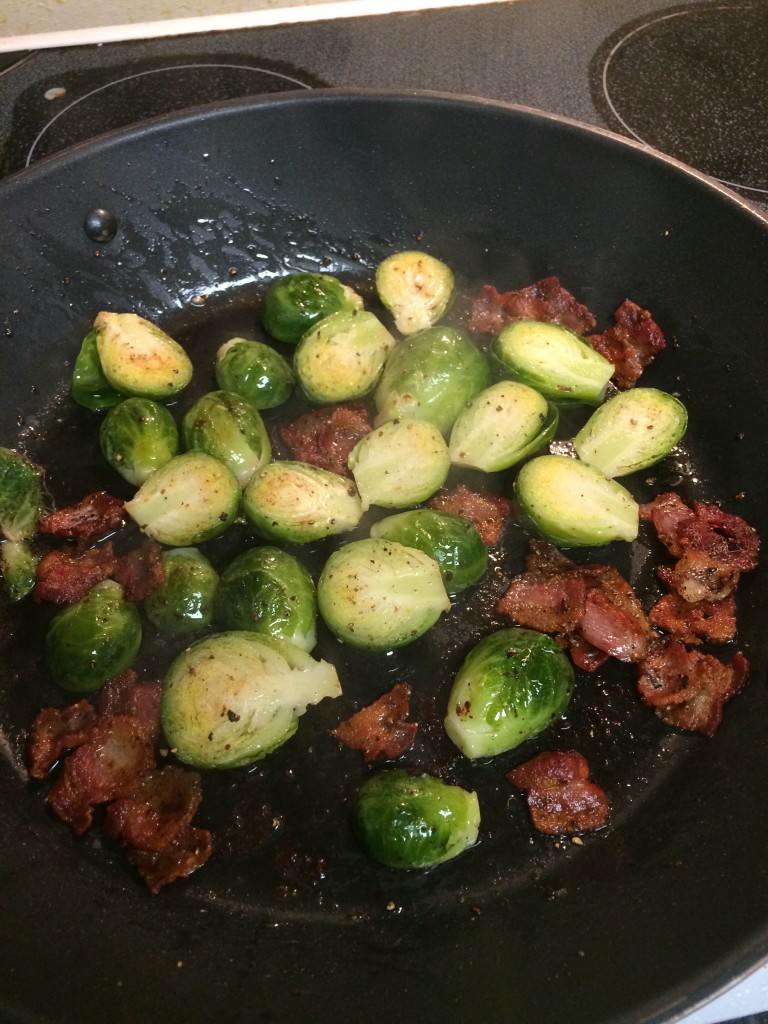 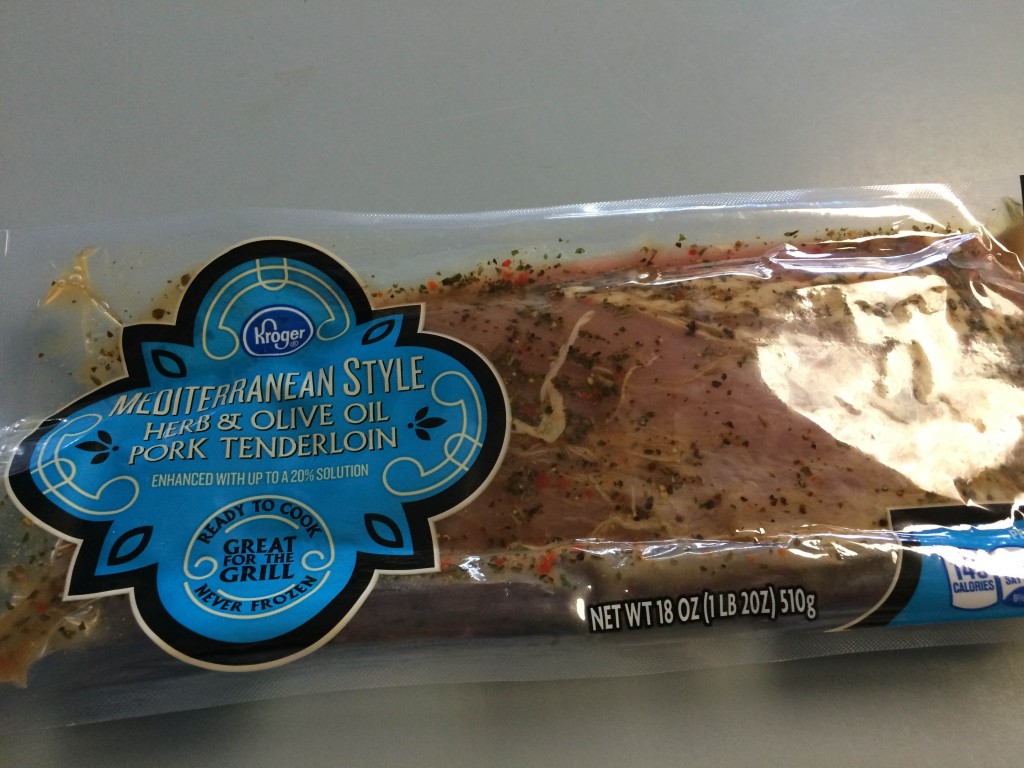 While Michael grilled up the pork tenderloin (it was REALLY good, just slightly salty) I sauteed Brussels sprouts with a few pieces of bacon and we settled in to watch a few episodes of House Of Cards. Man, this season is crazy!

Sunday Michael, Bella and I piled into the car and drove to Mount Hood to go for a hike. Nope, no snowshoeing–hiking! In March! It was 70 degrees with clear skies, shorts and t-shirt weather. I remarked that I don’t think we’ve EVER gone hiking in March before. A little bit in January and maybe February but but March the rain starts and doesn’t stop til May/June. This year we are lucky. OR, we are getting our summer now instead of in July…I can’t complain, though. Either can Bella–she’s loving how active our winter is so far! 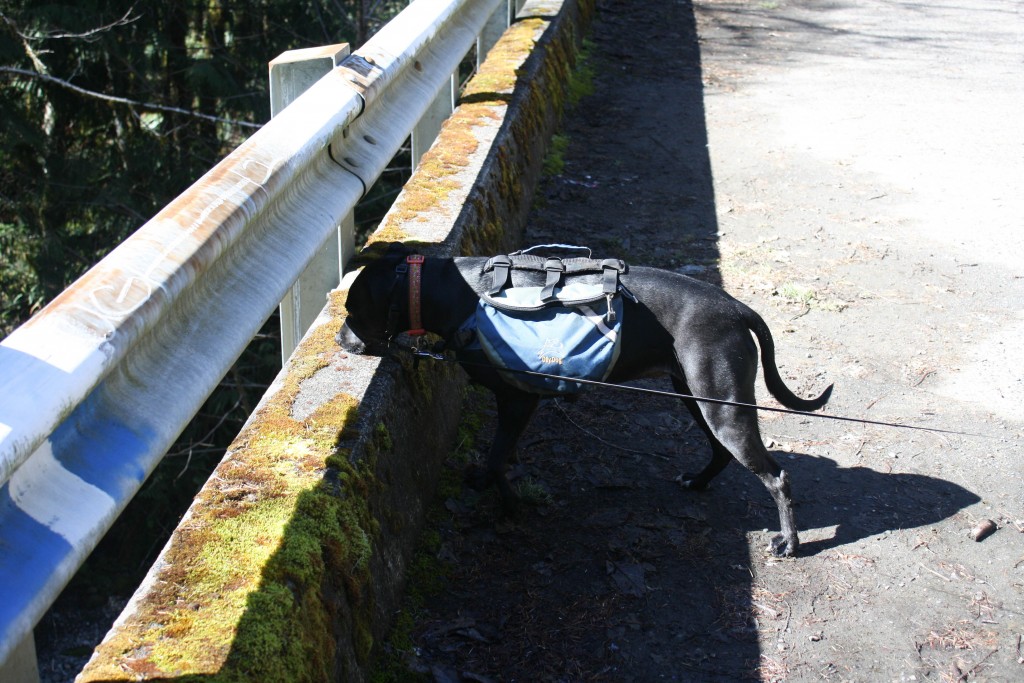 We did Salmon Butte, one we’ve hiked once before last summer. It was a hot day last year and I remember we didn’t do as far as we’d hoped because it was so hot and I felt like Bella was getting overheated (she was panting a lot). This time she was a trooper. 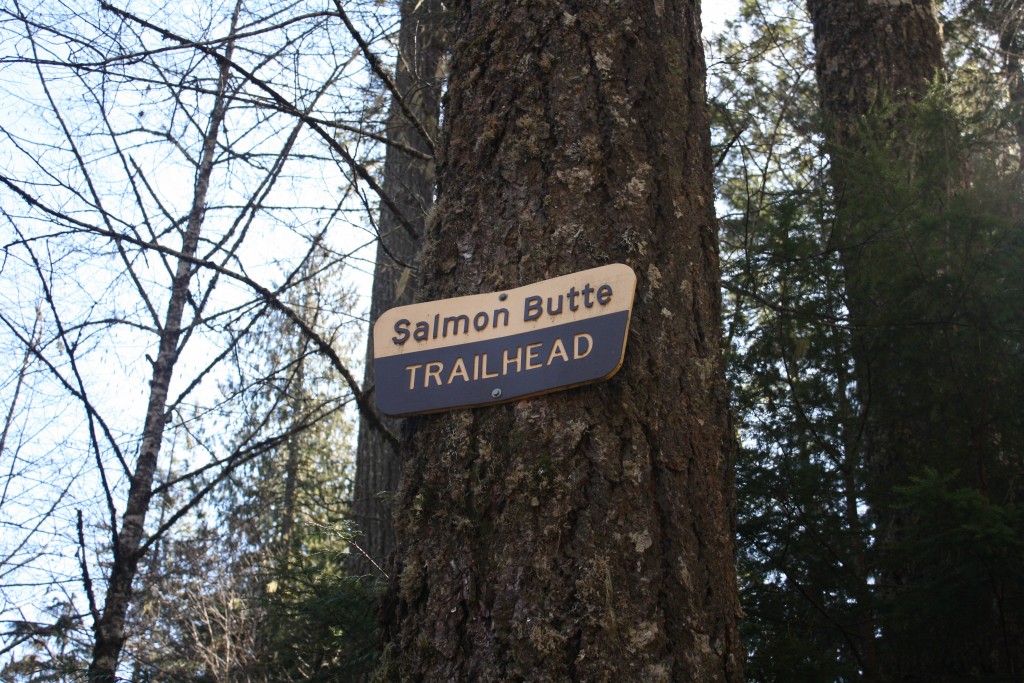 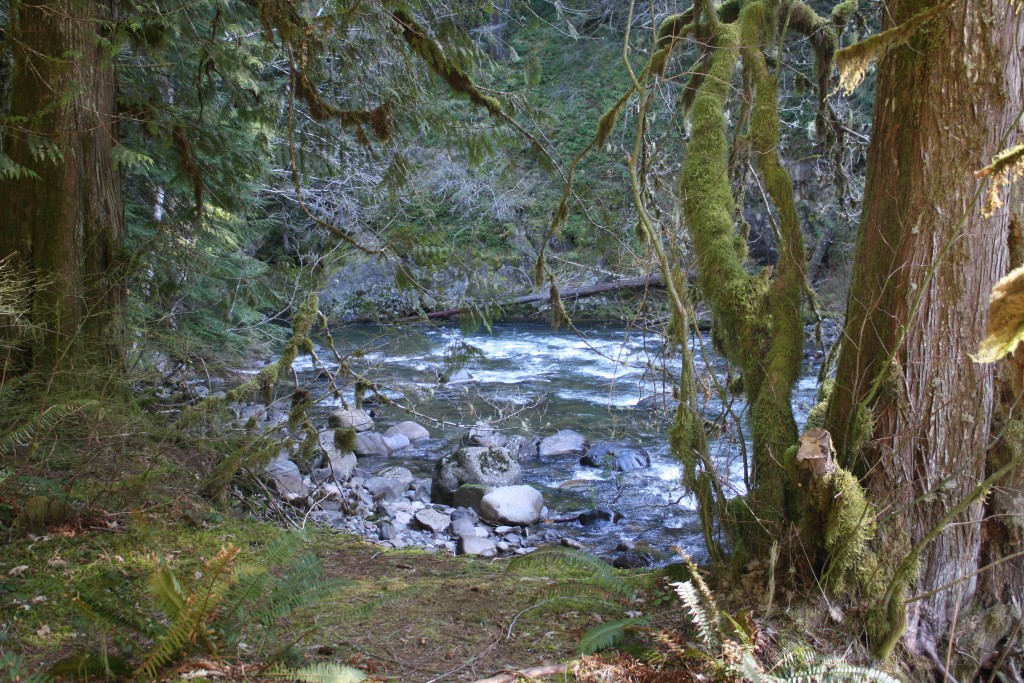 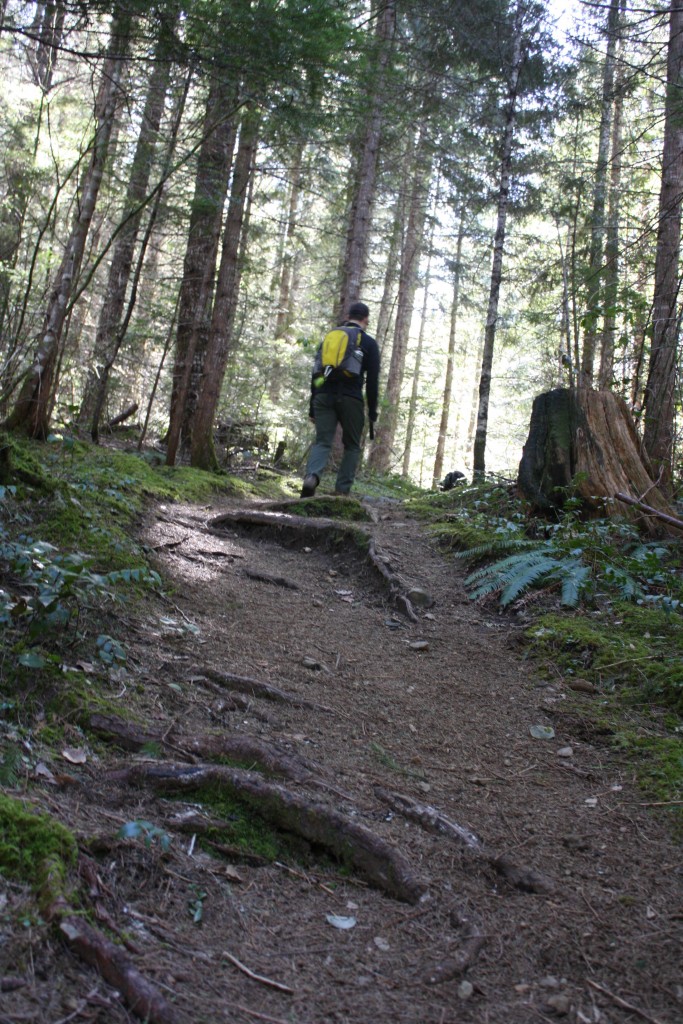 I was panting and huffing it up the trail, feeling like I was really slow and out of shape. Then Michael said he was hiking at a faster pace than normal. Oh, that explains it. Normally a hike doesn’t make me that winded! Apparently he was speed walking! ;P 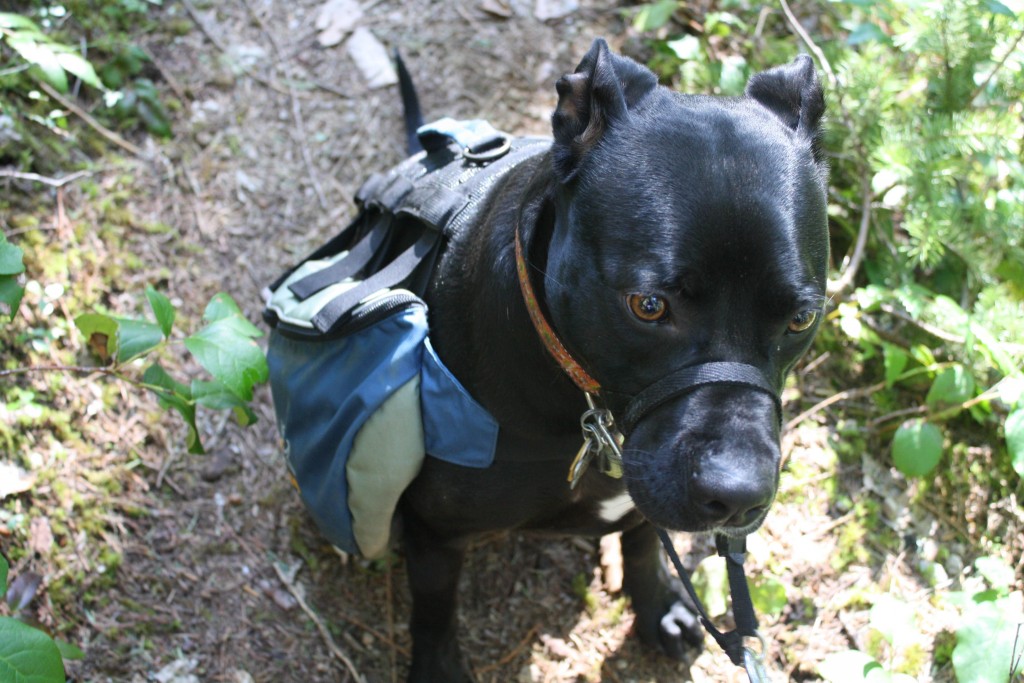 There were a few parts of the trail that were washed out and difficult to cross but we made it. And Bella tromped through the creek like it was nothing. Us humans tried to balance on sticks and rocks in the creek. 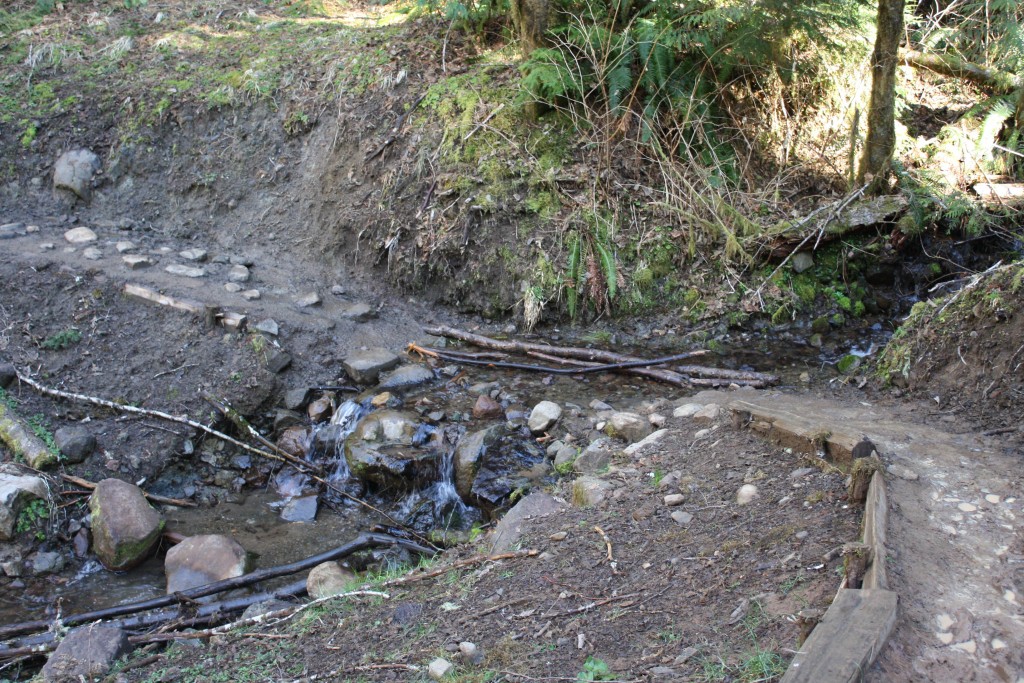 We made a stop in the sunshine to eat our Subway sandwiches for lunch and then continued the strenuous hike uphill. 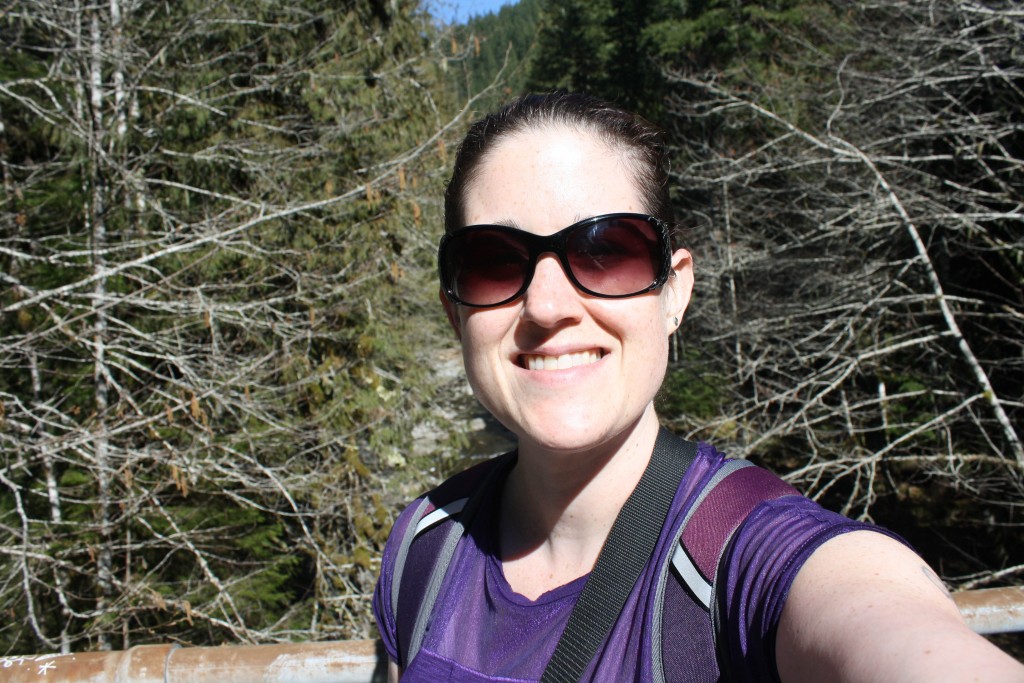 We got a little ways past the spot we turned around the last time we did this hike and then the path was blocked by a large tree that had fallen. If we didn’t have Bella we might have been able to maneuver around the fallen tree but it seemed like a dangerous thing for her to try and crawl underneath with the broken stabby branches so we figured it was a good time to turn around. 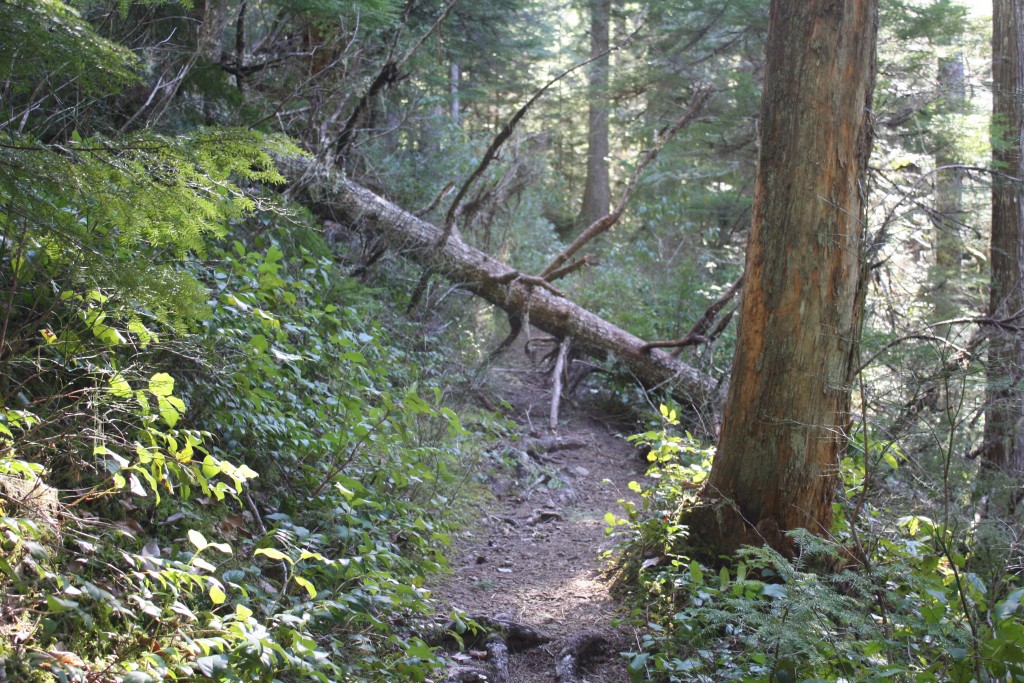 There were some pretty purple wildflowers blooming (with lots of plump bees buzzing around pollinating) and there was also this odd looking plant that was kind of like a broccoli stalk: 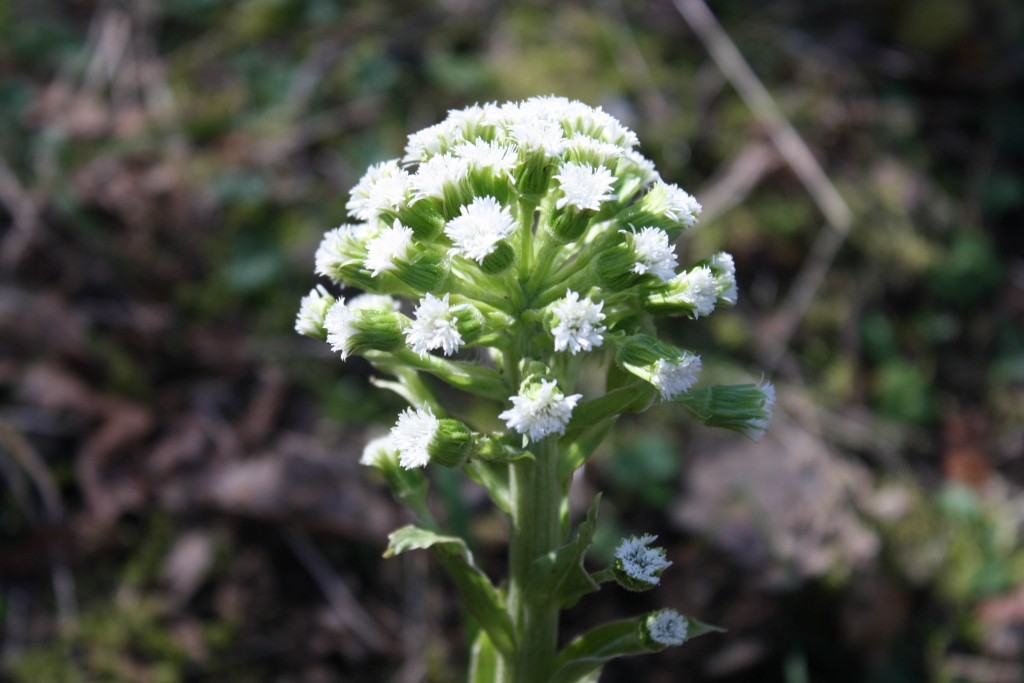 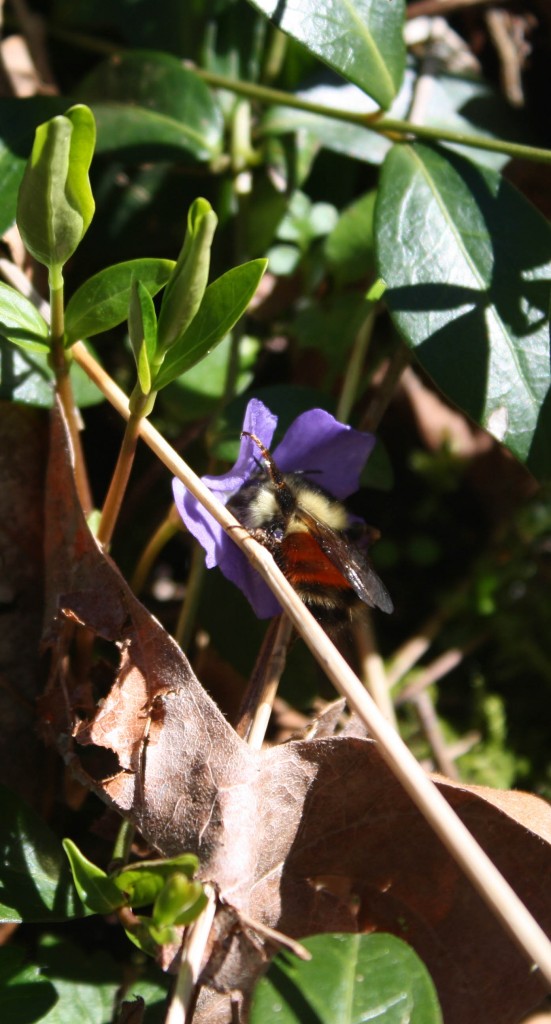 Anyone know what that white flower is? I’m really curious and would like to know. We hiked back down the trail and past by small waterfalls and creeks. The temperature was warming up nicely and the sun felt so good. The breeze was WARM, which was a nice change from icy. I just could not get enough of the forest and river and sunshine. Loving it! 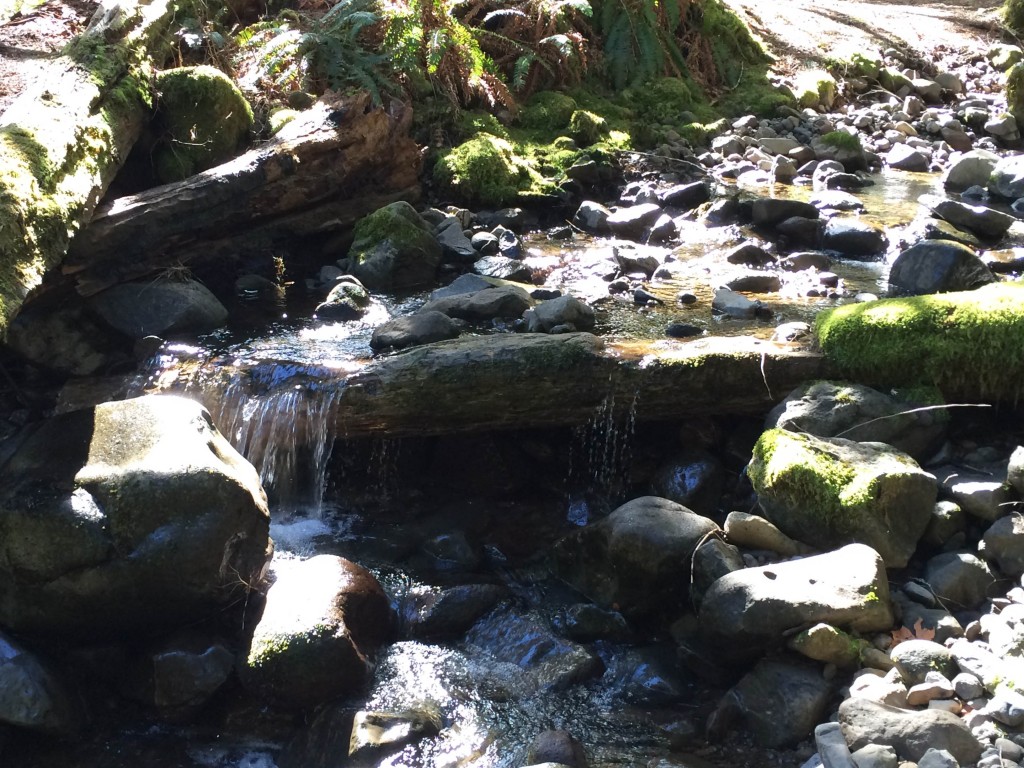 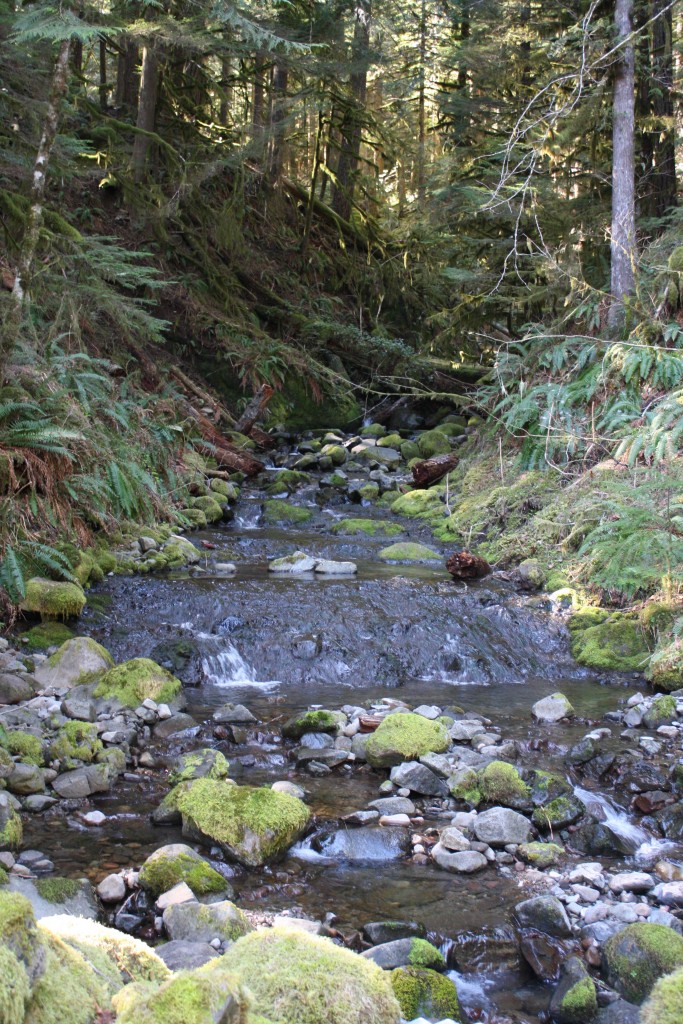 We ended up doing exactly 4.5 miles. It took was just over 2 hours, with a lunch break. It was a decent hike, a lot more body-friendly for me than last weekend’s hike that had me very sore and very tired (we did too much that day). I didn’t feel too tired or like I hit the wall with this hike. And bonus points, it’s only 45 minutes from the house. That’s perfect! That’s a good driving distance for a great hike in my book. Hood River/The Gorge area hikes are around 45 minutes to an hour, depending on which one you do, and they are always really popular and crowded. Instead, we got to go up to the mountain and enjoy the fresh air on an almost empty trail. 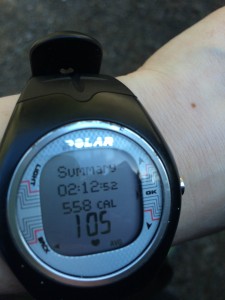 We got home with time enough to clean up, give Bella a bath and dinner and then we drove to Beaverton to have dinner at Michael’s mom’s house. She made orange chicken, rice, steamed broccoli and salad. Everything  was delicious! And I definitely ate a little more than I’d planned. Hadn’t realized just how hungry I was until we started eating. Hiking sure takes a lot out of you. Here is dinner: 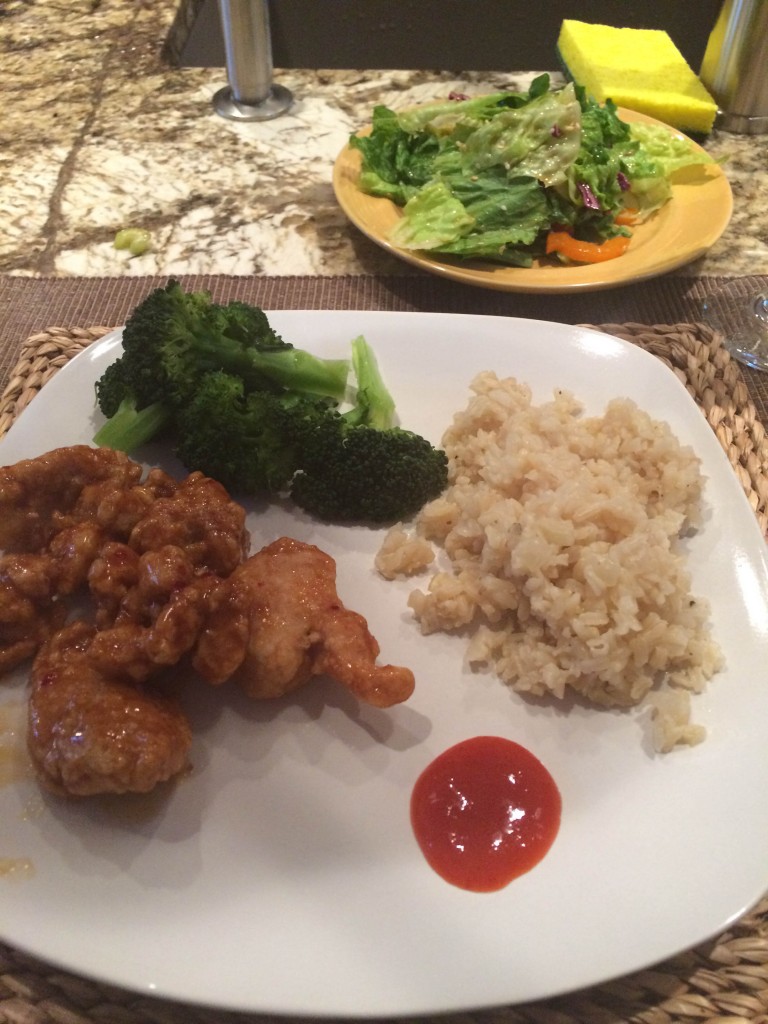 I should also mention that when we went to Michael’s mom’s house for dinner we left Bella OUT OF HER CRATE. We’ve been slowly leaving her home alone, uncrated now for a few months. The most time we’ve left her out is about an hour. She’s done really well and didn’t destroy the house (or my shoes) like she did last year. We decided to leave her out Sunday evening while we went to dinner as a test–and because we both figured the hike would have tired her out enough that she wouldn’t get into mischief.

I have to admit, as the evening went on and then we decided to drive home I was definitely getting anxious! I had all sorts of horrible and funny thoughts of the destruction and anarchy that we were possibly going home to. Michael drove into the garage and I leapt out of the car before it was even in Park. I went into the kitchen and Bella AND Fat Kitty were both sitting there waiting for me! Bella was super excited, jumped and licked me and then flopped onto her back for belly rubs. Since Fat Kitty was okay I figured the house was probably ok too but I did a quick peek and yep! Bella was a ROCKSTAR. No destruction. Everything was exactly as we’d left it. Nothing was eaten, chewed, puked on or peed on. I think she just spent the three and a half hours we were gone sleeping on the couch….! 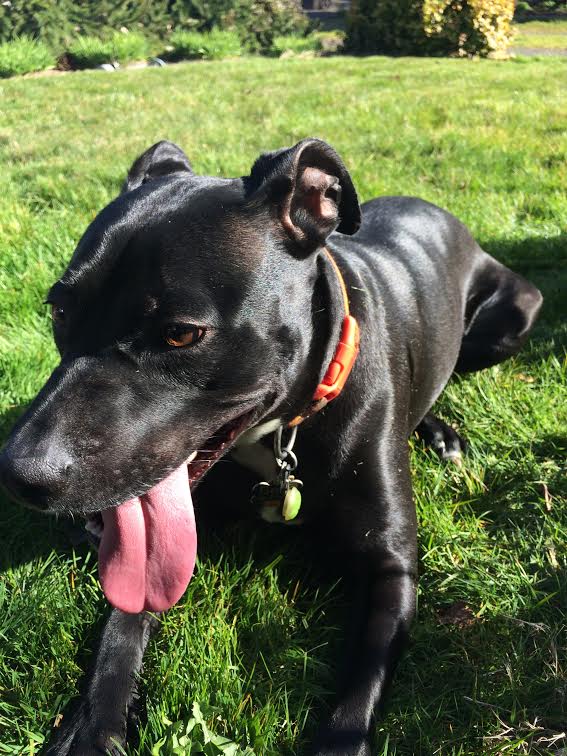