Thursday night Michael, his friend Jeremy and I met Michael’s family downtown for his belated birthday dinner. Michael was craving lasagna–that was his only request. So I made reservations at Mama Mia Trattoria for 7 of us. 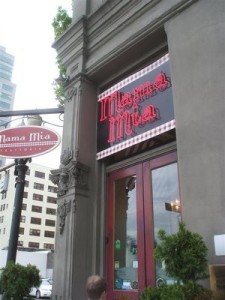 I wanted to go into the restaurant prepared. I spent some time looking at their online menu and decided what I would order. My biggest pitfall in restaurant eating is not being prepared when I go in and getting overwhelmed with all the yummy food options on the menu. My eyes get bigger than my stomach and my willpower falters. 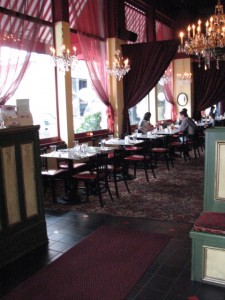 This time I was smart: I picked 3 entrees I was interested and Googled the calories (estimated) to see which would be the healthier choice. I finally settled on the Eggplant Parmesan and was super excited about eating it. 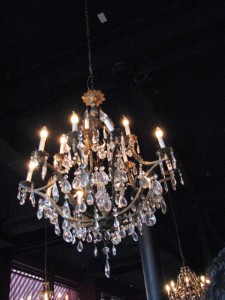 I ordered a glass of red wine: Frescobaldi, “Rèmole” Sangiovese-Cabernet, Toscana, 2008. It was a lovely, crisp red. 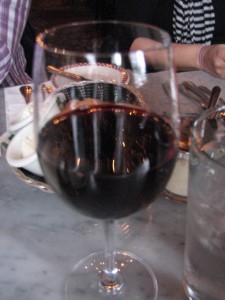 The second part of my Restaurant Fails is the bread basket. It’s so hard to resist it for some reason. I ate a few pieces of the bread. 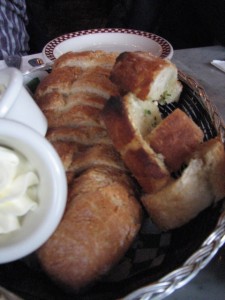 The third part of my Restaurant Fails is the serving sizes. This time I had a plan: when I ordered my dinner I’d ask the waitress to bring a To-Go box so I could immediately put half the serving in there to make sure I was only eating one serving.

We arrived at the restaurant and it was still happy hour so our plans changed a bit. We got a table for 7 of us and I looked at the happy hour menu. It was different than the website. I didn’t panic–I zeroed in on what I thought was the healthier option:

It seemed healthy to me because there was no pasta and the eggplant was good. It was almost like Eggplant Parm. I tried to order that but the waitress said they had no eggplant because of the weather all the crops froze.

Second choice: Lasagna of the day. It was lasagna with white sauce, Painted Hills ground beef, Carlton Farms pork, veal, vegetables like carrots and celery, and cheese. I ordered a Caesar salad to start. It was really small, which was perfect. 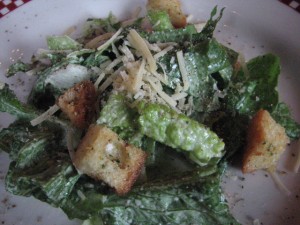 I asked the waitress for a box and she said they didn’t do that for Happy Hour. Uh Oh! A little panic but I knew I could be strong. Luckily, the lasagna came out in a proper serving size! Since it was happy hour portions I didn’t have to feel guilty about eating all of it. 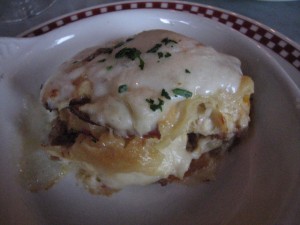 It was so good! I think there was egg in it too. It was light and fluffy and the veggies inside were a nice surprise. Delicious!

Since it was Michael’s birthday they brought him a piece of the Amaretto Cheesecake! We all passed it around and took a bite (so I had about three bites of cheesecake–the perfect amount). It was creamy cheesecake with an almond biscotti crust that flaked at the touch of a fork. It was served with caramel sauce and candied almonds. 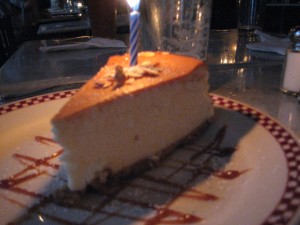 It was to die for! It was a good night and it was nice to spend time with everyone. I feel like last night’s restaurant experience was a positive for me. I may have gone over my calories for the day BUT I did eat proper serving sizes, enjoyed some wine and a few bites of dessert. I say that’s a win!

QUESTION: How do you prepare for restaurant eating? Are you successful?