This post is about random thoughts on the first week!

I felt pretty good! Honestly, it wasn’t as hard as I thought it would be. It felt way different than the times I did low carb diets. I didn’t feel deprived or miserable. During the hard adjustment times in the first week I definitely had some “keto flu” issues (see below) and irritability, but it was pretty mild.

Was I perfect? No. There were a few days in the first week I was NOT 100% keto. There was one day in particular where my macros were pretty good but my carbs were super HIGH! Like 40 net carbs. Bad, bad bad. But not because I ate bread or cookies or candy. Because I ate nuts, broccoli and too much dairy. But it was one day.

Breakfast didn’t change much because we were already doing a low carb breakfast (usually). A typical breakfast for our family was either scrambled eggs with sausage topped with cheese or an omelette. The omelette would be with cheese, sausage and spinach or cheese, bacon, onions…that’s usually what we would do.

Sometimes I would have two fried eggs with a piece of toast. On Wednesdays when I worked from home I sometimes had a piece of toast with peanut butter and banana slices on it. Or I’d have a bowl of oatmeal. THOSE were obviously NOT keto-friendly breakfast choices.

Like I said in the first post, the biggest change for breakfast would be my coffee creamer. I got the Nutpod creamer (which turned out to be a disappointment because while it was 100% spot on nutritionally for a Keto diet, it tasted like NOTHING). I switched to heavy cream and Stevia. Which still wasn’t great but better. I also bought some MCT Oil, which is supposedly a great thing for coffee on the Keto diet. I was reluctant to try it because 1 tablespoon was 130 calories, but….this diet is about trying new things so I figured I’d give it a try. (It was ok. It didn’t taste like anything.)

In terms of the other meals, I did a bunch of research, planned out three week’s worth of meal plans for breakfast, lunch and dinner and made a list of keto friendly snacks.

The trick was figuring out snacks and lunches (for me) that were low carb. My go-to snacks at work are fruit. Apples, whatever berry is in season and my plain Greek yogurt. It was definitely a challenge to find something.

So I went to to the store and got a few things that would be compliant.

It was a lot of prep work! But once I did it for the week, I was pretty good.

First, I measured out and weighed the nuts I was going to have for snacks. Nuts weren’t going to be a regular thing, but for the first week on Keto I got a can of salted mixed nuts (it was cashews, pecans, Brazil nuts, almonds and peanuts) because I figured it would be the best time to have that as a snack. The doctor I talked to said the best way to get through the “keto flu” was to drink a lot of water and make sure I had extra salt.

Second, I got a Ranch Dip seasoning packet and made my dip from scratch to have raw veggies (broccoli and cauliflower) for snacks.

Third, I got a seasoning packet for hollandaise and a packet to make alfredo sauce from scratch. It’s easier to manage the sugar content by doing it yourself. Everything store bought has sugar in it! 🙁 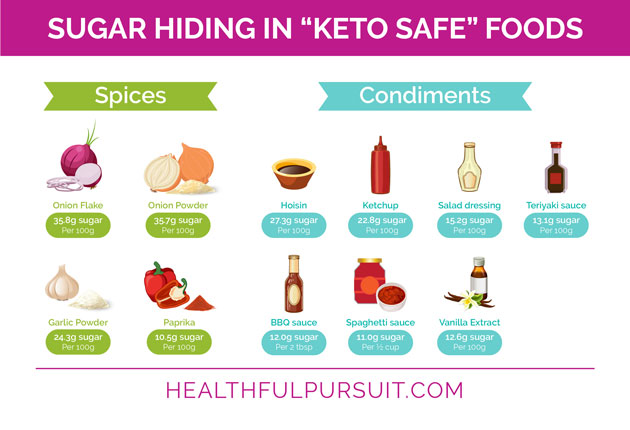 Having an Instant Pot is nice for this–for things like shredded chicken and making hardboiled eggs.

Lastly, I bought a lot of veggies and spent the time on a Sunday chopping and prepping and measuring to making it easier in the week.

I didn’t miss it as much as I thought I would. I’ve done a sugar detox before a few times and I remember it feeling like torture. It was always on my mind. I craved chocolate. I wanted dessert. And while this time, I definitely missed it on occasion in the first week, but I feel like I missed it more out of habit than desire. Like I wanted dessert on a Saturday night after dinner while we were watching TV.

I don’t know why this time was different. Maybe because I was eating high fat and it was scratching that itch? I have no idea.

I did have a few pieces of chocolate in the first week but I got the super super dark chocolate that is low carb.

I miss being able to eat whatever vegetables I want. Like I love carrots. Carrots and dip or carrots and hummus are healthy and a good snack. But not keto friendly. So that’s a bummer. I have to consciously think about stuff now and look up online how many carbs and sugar are in things to see if it’s keto-friendly.

I felt the effects on Day Three. Typically you start to feel the “Keto Flu” Day 4-7. I don’t know why I felt it early, perhaps because I was working out the whole time? Not sure!

But it started on Day 3 of the diet. I woke up feeling fine. The first three days I felt great on the diet. I slept AWESOME the first few days, too, then Day 3 I went swimming. It was the hardest, slowest, worst swim I’ve ever had and actually cut it short because my muscles were just NOT WORKING. Seriously. It felt like my arms just wouldn’t work anymore. I was so fatigued. By the time I got home I was shaky and felt weird. I ate lunch and then took a nap and had some bone broth when I got up and felt better. But it sucked!

I also had muscle cramps and charlie horses, which I never have. I guess that’s a side effect of adjusting to the diet, too. 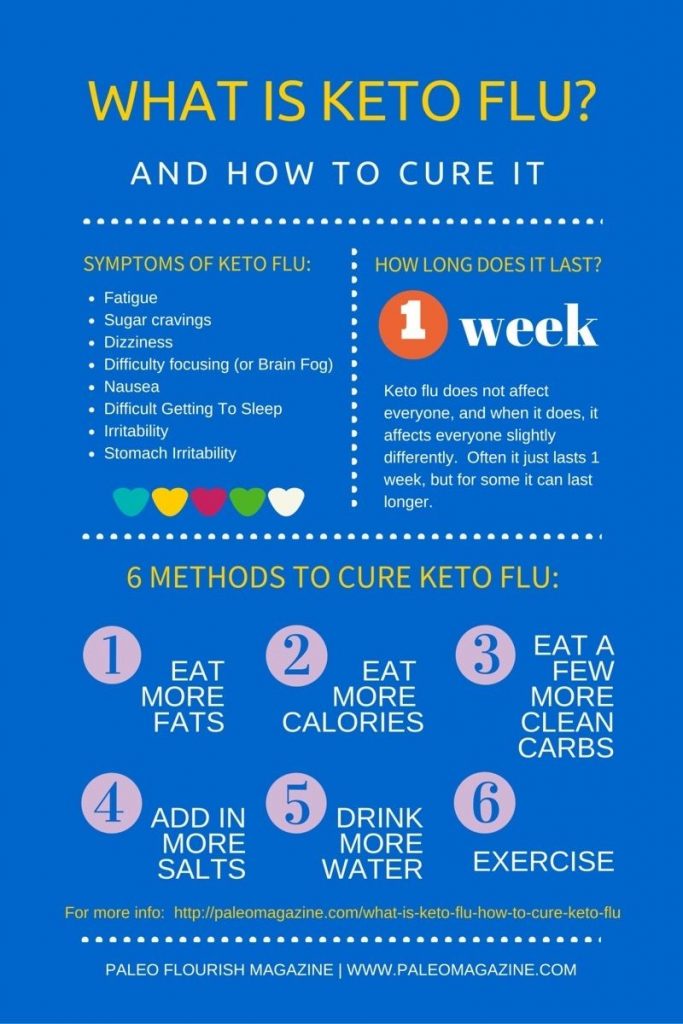 I’ve said before that I am trying to be better about drinking more water. I am usually pretty good during the week at work. With this diet, I am really ramping it up! Of course, that means I am peeing a LOT! Lots and lots of water. Unsweetened iced tea with breakfast. Sparkling water with lunch and dinner. Bone broth for a snack. Hot tea (no sweetener–boo) when I need it.

Breakfast – Cheese omelet with sausage on the side. Unsweetened iced tea. Coffee with nutpod creamer. 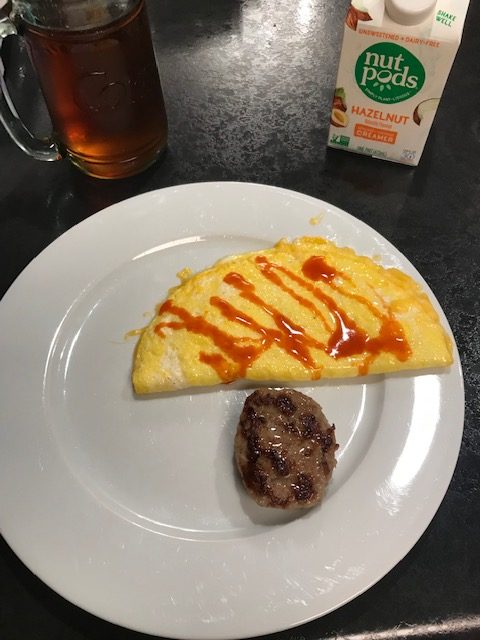 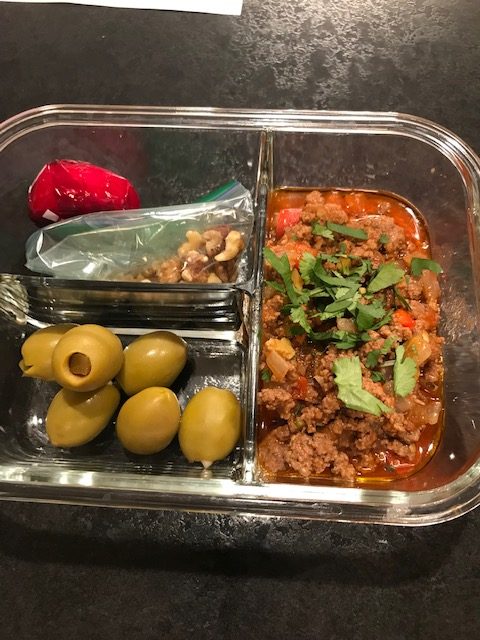 Dinner – Turkey Burger with Smoked Gouda Cheese, Bacon, Mayo. I made a cucumber salad with avocado and Newman’s Own Lite Italian Dressing (low carb and no sugar! Yay!) and a glass of red wine. 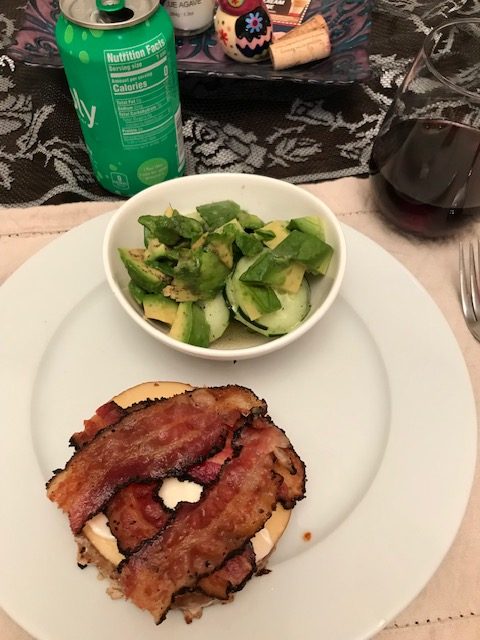 How I felt & how I did- Felt good! Wasn’t hungry! Like not at all! Didn’t feel tired or run down, either. I even worked out. My macros were great! I was pretty close on all the macros, not perfect, but that’s ok. The important part was I got to 20 net carbs. Yay me! 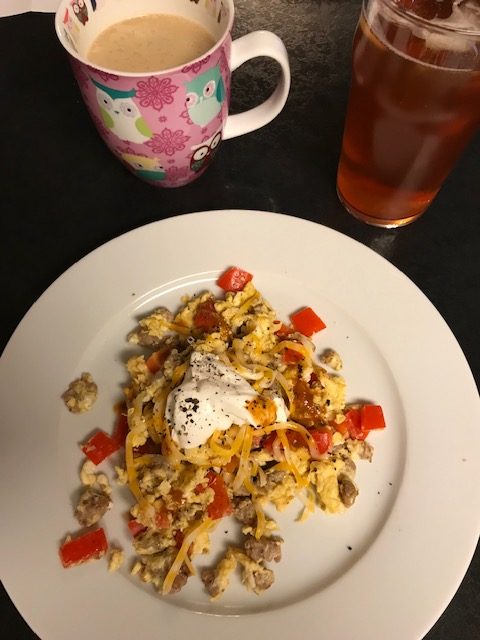 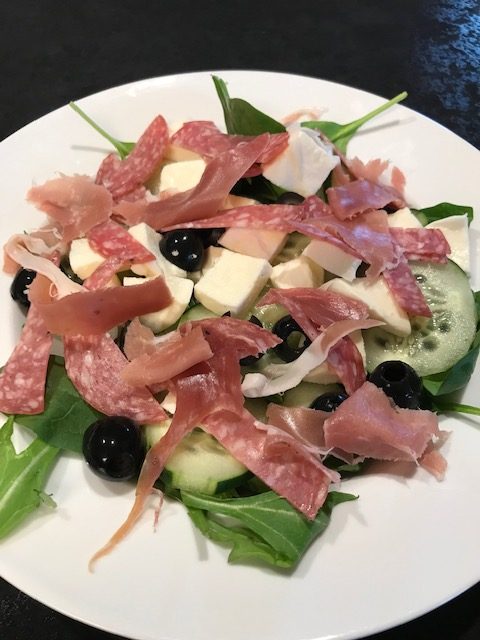 Dinner – This was the first challenge–going out to a restaurant. I could have changed our start date so that we began the Keto diet after our dinner plans with friends, but I wanted to be able to make this work even going out. We met our friends at Hopworks (basically a beer and pizza place but it’s kid friendly). I got a Cobb Salad (salad with blue cheese dressing, blue cheese crumbles, tomatoes, bacon, avocado, hard boiled egg). It came with a breadstick, which I did not eat but wanted to! 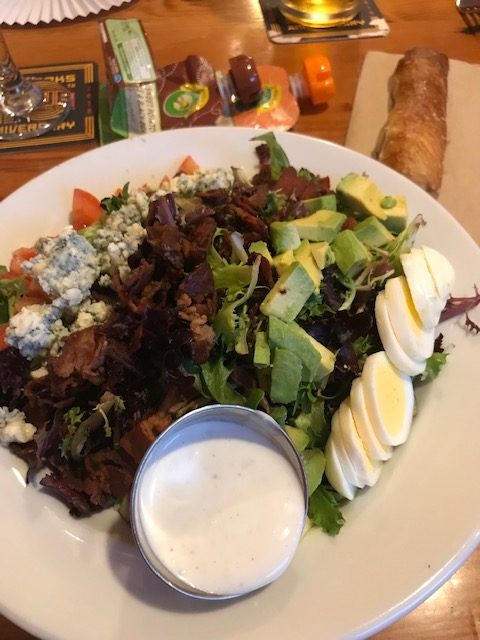 I did have a glass of wine but just one. 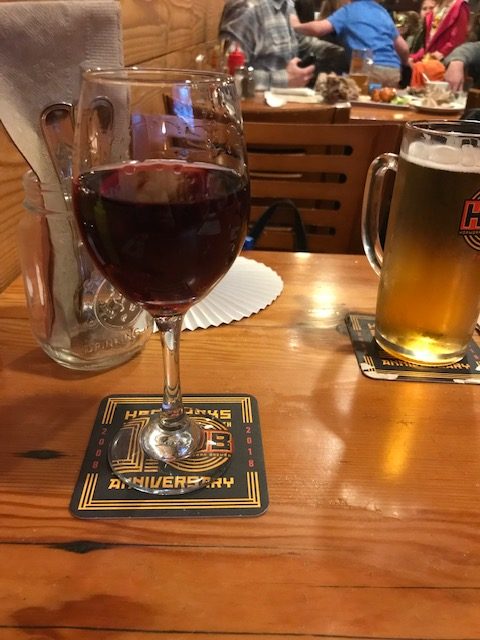 Overall, my second day was good. I was MUCH closer to my macro goals (67% out of 70% of fat, 23% out of 25% on protein) but today I was at 27 net carbs for the day, so over. Looking over my day I discovered that my highest carb count was the avocado–ironically–but that’s ok because it’s the good carbs. (I mean HOW is the avocado higher in carbs than my WINE?!?!)

But I worked out today, so maybe the few extra carbs were a good thing?

Breakfast – Omelet with cheese and bacon and hot sauce. Unsweetened iced tea and coffee with heavy cream and Stevia. Still not quite the same as my coffee creamer. WAHHHHH!!!! 🙁 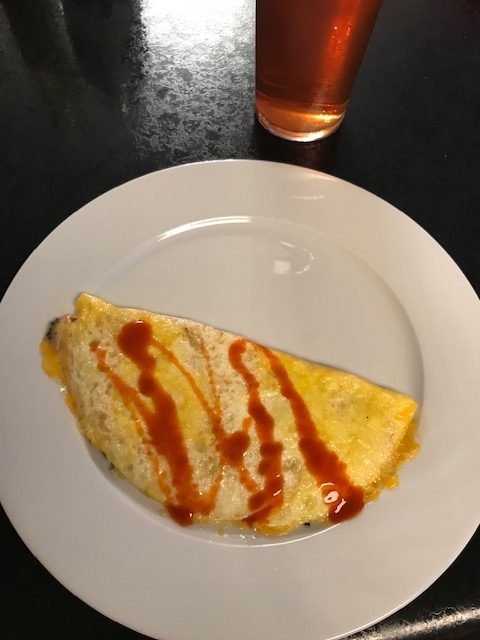 Lunch – I got home from swimming feeling the first effects of the coming Keto-flu (I think). I was weak and shaky and felt like my muscles didn’t work. I had steamed broccoli with Goddess Dressing and some pork rinds (which are kinda weird but good if you are craving chips). Then I had a “wrap”–two slices of turkey and salami and a slice of prosciutto wrapped around a hunk of fresh mozzarella with mayo and mustard. 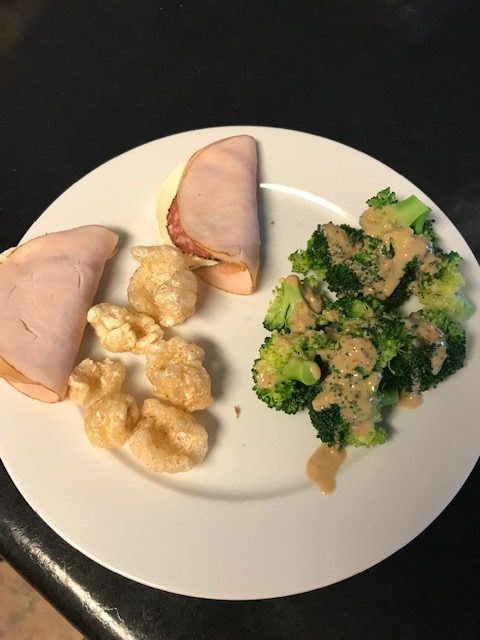 Snacks – Today I had a mug of bone broth. It was good! Warm and filling. I also had a piece of cheese and, some nuts and some olives.

Dinner – Michael made pastrami on the traeger grill! It was a week long process, too! But it was cool to have homemade pastrami for dinner and we have a ton for lunches for the week. Dinner was pastrami in a low carb wrap with mayo and lettuce. It was really good!

Breakfast – Scrambled eggs (with heavy cream) with red peppers and sausage topped with some shredded cheese. Unsweetened iced tea. I had coffee with heavy cream and Stevia when I got to work. 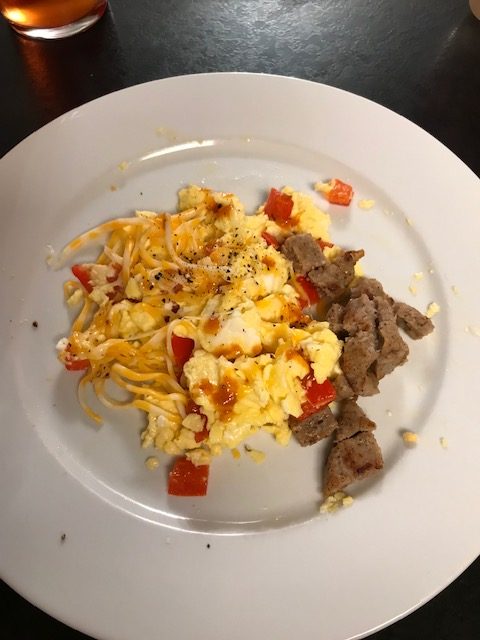 Lunch – Pastrami in a low carb wrap! These wraps are really great! Not only are they actually tasty but they are low in calories and low in carbs. They are only 5 net carbs. So I made a wrap with mayo, mustard, pastrami, some lettuce and cheese. Bone broth.

Snacks – I made ranch dip from scratch (Hidden Valley packet with Tillamook full fat sour cream) and had raw broccoli and cucumber. Then later I had mixed salted nuts and a piece of cheese.

Dinner – Zoodles with pesto and meatballs. Some mozzarella on the side. 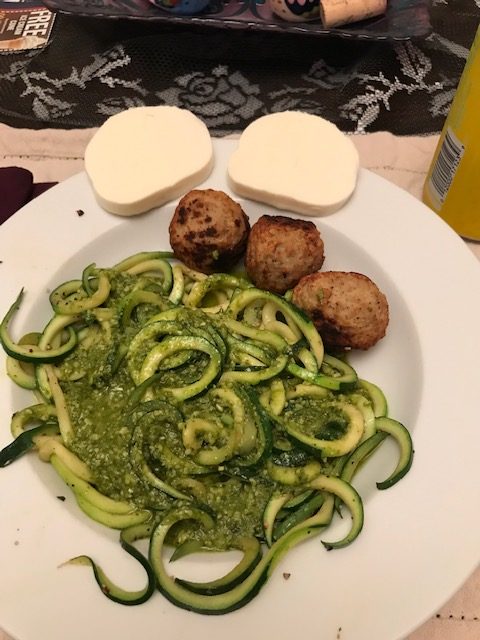 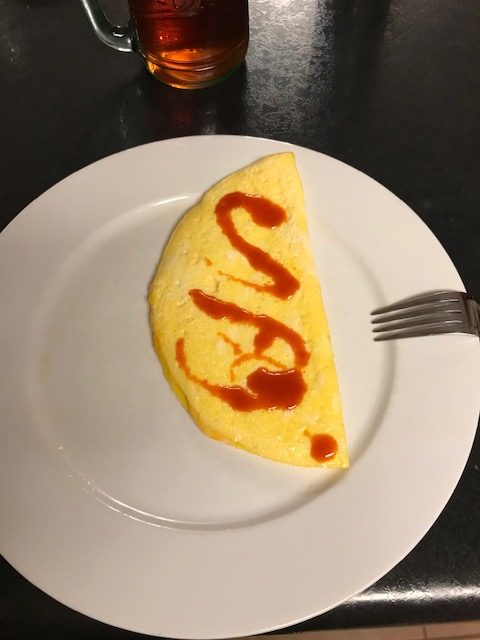 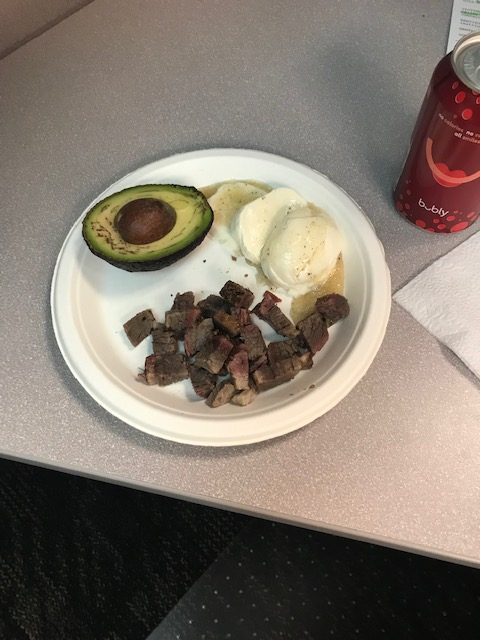 Snacks – Mixed salted nuts (only 1 ounce this time), cheese in the morning. In the afternoon I had homemade ranch dip with cucumbers and broccoli. 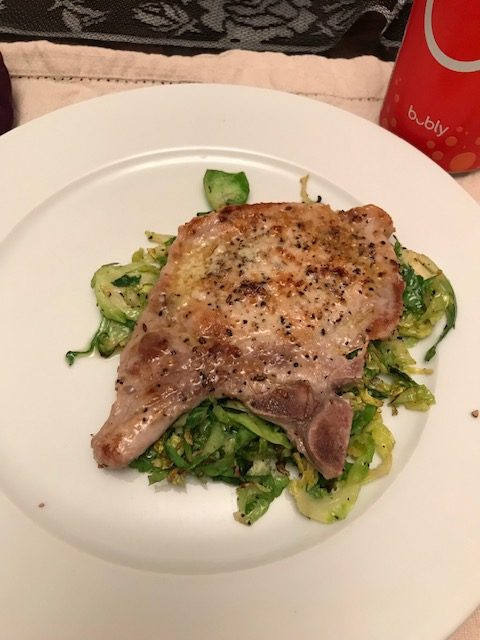 My Take Away From Week One