If I told you that Michael and I liked Texas so much we went back the weekend after our trip to Austin, would you buy it? Well, we did go back to Texas. This time, Dallas. It wasn’t ideal–Texas two weekends in a row. But Michael’s family had an event that we’d planned on going to all year long. Then my cousin got engaged and set the date for her wedding in Austin. We kept hoping the dates would line up perfectly so we could make one trip to Texas. 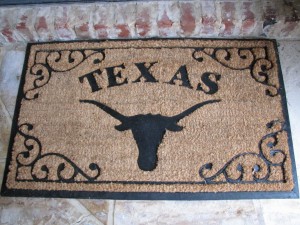 Well it didn’t line up that way. Neither of us wanted to spend 12 days in Texas in order to save airfare and we couldn’t take that much time off work. Two trips it is! 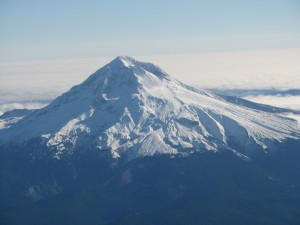 We flew from Portland on Saturday morning and arrived in Dallas after lunch. It’s funny. I’ve NEVER been to Texas in my entire life and then I go twice in one month. 😛 Laugh away. We arrived in Dallas in time to unpack and relax a bit at his dad’s house before changing for dinner. 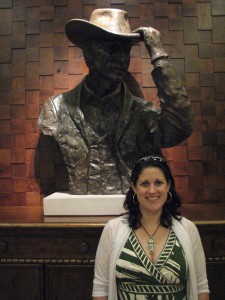 It wasn’t just a normal dinner, it was also the 90th birthday of Michael’s cousin. It was a pleasure to meet her! She was a feisty firecracker of a woman. She was so interesting too. She lost her first husband when she was 23 years old–he was killed in Japan by a suicide bomber. What an amazing story. 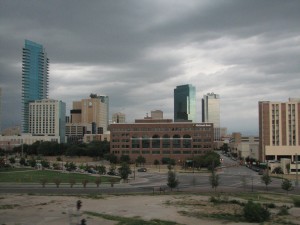 Did I also mention that it was stormy and rainy when we arrived in Dallas? We LEFT the rain in Oregon, hoping for sunny skies and warm weather. Instead it was stormy: pouring rain, lightning! Apparently it was the first rain they’d had in six months! Figures. 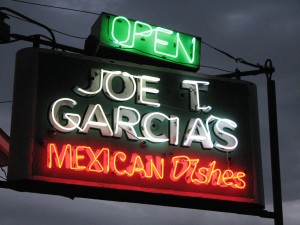 For dinner we went to Michael’s cousin’s favorite Mexican restaurant — Joe T. Garcias. What a crazy place. It was at least a whole city block big–with four huge parking lots for the restaurant. The place was humongous. Words cannot describe how big. The waitress guided us through a massive banquet room–which was completely full–outside through a large patio into another massive building. (When we left after our dinner the place had a line a mile long, outside into the rain to get in!) 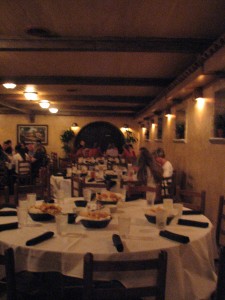 The other funny thing about Joe T. Garcias restaurant is that there are only two entrees: fajitas or enchiladas. That’s it. There’s no menu. You can’t order anything else there. It’s also served family style. They brought nachos to the table for everyone to share (I had one) and then the entrees came out with tacos for everyone to share. 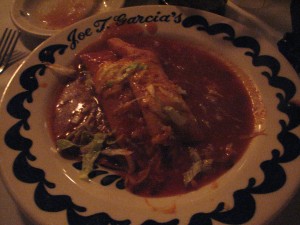 I got the cheese enchiladas (they were small, thankfully) and the beans, rice and guacamole were all served “family style.” Michael got the beef fajitas. I had a few bites. 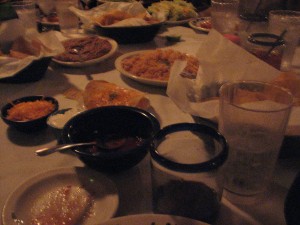 It was such a fun and unique experience! I’ve never been to a place like that. The food was pretty good, too. The only complaint: it was INSANELY loud there. It was hard to talk to everyone. So after the musicians sang happy birthday to the birthday girl, we headed out. 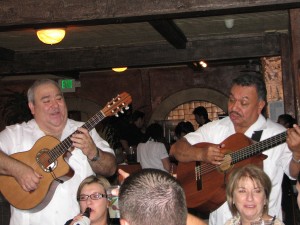 We went to a nearby fancy hotel that had a nice, quiet bar where we could all talk and actually hear each other. We went to the Whiskey & Rye in the OMNI Hotel. 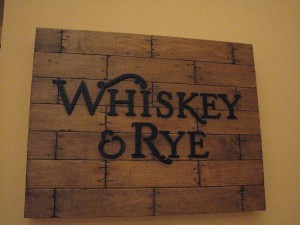 It was a cute place, dimly lit. Everyone on the bar was glued to the football on the TV. That’s something that’s very common in Texas. Sports, sports, sports. If they aren’t watching sports, they’re talking about sports. If there isn’t a game on, they’ll talk about old games, or ones coming up–including plans to travel to the stadiums. I’m not a sports fan. This pride and fervor that they all seem to have is very foreign to me. 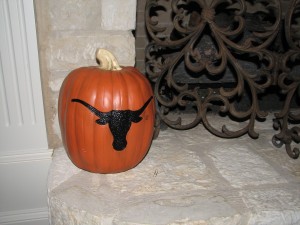 We had a nice time chatting. I had one glass of red wine with dinner and one at the hotel bar. It was funny, when we were at the restaurant I asked for a wine list and the waiter looked at me like I was a weirdo. It was either red or white. 😛 Another difference between Oregon and Texas! 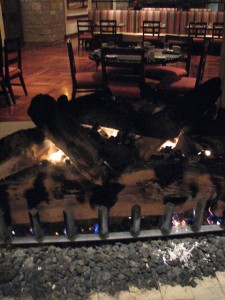 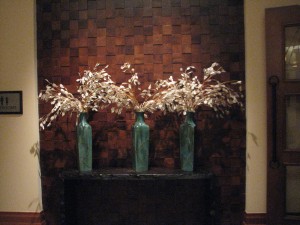 We headed home to Michael’s dad’s house in the pouring rain. It was literally like Portland’s rain–big, constant raindrops. Everyone thanked us for bringing the rain with us. Hmmm not exactly what I wanted! I wanted sunshine! I changed into my PJs and melted into the bed. I was asleep immediately and didn’t wake up once the entire night. That bed was heavenly.

QUESTION: Have you ever been to a restaurant like that that only had a few things to order? Have you ever had back-to-back trips?

Let me start at the beginning. After my scary bike ride on Tuesday, I arrived at Dig A Pony–a new bar in SE Portland. I was meeting Michael and a few of his coworkers for drinks there.  The restaurant itself was cool, I liked the decorations a lot. It had a cool vibe but that’s where the things I liked about it ended. 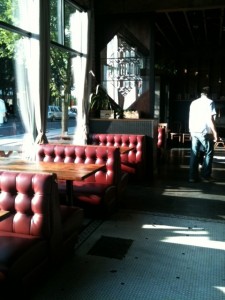 I ordered the Boneyard IPA and I enjoyed the beer a lot. 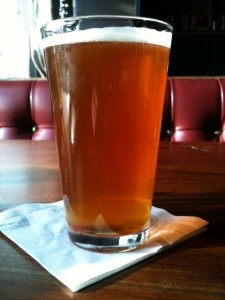 Okay, here is where I start to complain about the place. First, there’s no table service. You have to go up to the bar to order everything and there’s not even menus at any of the tables. Rather annoying, if you ask me, especially if you’re with friends and having good conversation. Are you supposed to just walk away to order? Rather weird. 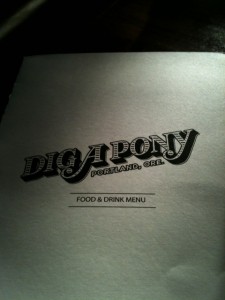 My second complaint was the fruit flies. They were everywhere and very annoying. I think it’s because of the big bowls of sangria sitting on the bar. It’s rather unappetizing to have so many bugs flying around in a restaurant. Eeew.

Lastly, I ordered the cornbread off the happy hour menu (which was sparse and not very interesting) and it wasn’t good. The cornbread was too dry and flavorless and not warm (like it said on the menu). The chili honey butter it came with wasn’t good either. I was really disappointed. It didn’t inspire me to want to try anything else on their menu. None of us were really enjoying the place so we left for somewhere else. 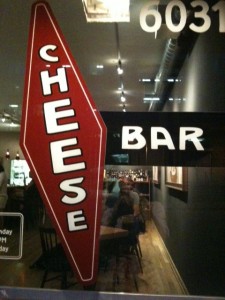 One of our friends recommended we try Cheese Bar on SE Belmont so we all headed over there. I’d never heard of it before. What a find! It was cute and trendy. Their cheese selection was almost as extensive as their beer menu: 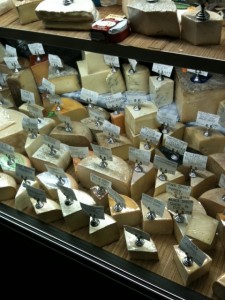 Our friends shared their meat and cheese plate with us. There were pickled vegetables, fancy bologne, salami and Sopressata with crunchy french bread and various cheeses. There was a goat cheese with peppercorns, something else I don’t remember and my favorite of the night: the cumin cheese. It was good! 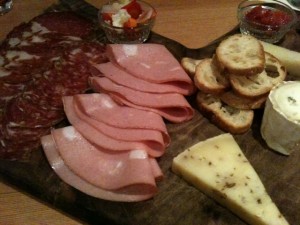 I got a pint of their Oaktoberfest beer. It was just okay, not my favorite but it grew on me as I ate the meat and cheese. 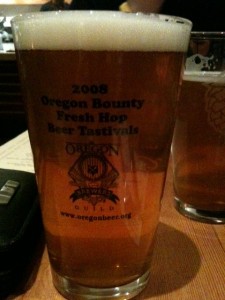 Michael and I ordered dinner and split our entrees. I ordered the Salami Milano Sandwich. It came with roasted onion, Mama Lil’s Peps, Mountina cheese & zesty slaw on a baguette. I ate half of the sandwich and Michael ate half. 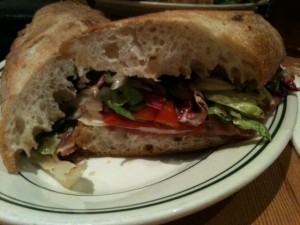 The sandwich wasn’t huge, so that was good, but it was tasty. I loved the spicy flavors. 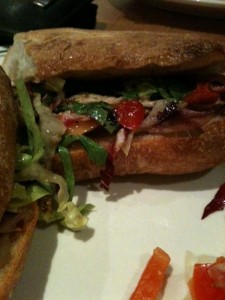 Michael got the Mac n’ Cheese with cheddar, havarti & parmigiano with a small side salad. 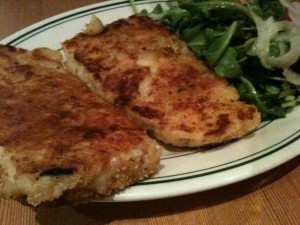 The mac n’ cheese was good. I’ve never had fried mac n’ cheese before. The flavors were mild. I’m glad Michael and I split our entrees. Although, that did not keep me from going way over my calories for the day–even with working out. 🙁

As we were driving home I was entering in my calories for the evening–estimating the best I could–and saw the number going up and up. I felt a lump settle in my stomach as I realized how many calories I consumed and I felt frustrated. I’d eaten too much. I felt guilty about the food I ate, I felt dread.

As we drove home Michael stopped by Krispy Kreme. He wanted a donut. I did not want one. I’d gone so far off the track with my calories and was too busy beating myself up to consider eating dessert. He kept telling me to have one, that I shouldn’t feel guilty about my food. He said that I was wrong about my calories, that I hadn’t eaten that much and that I should get dessert.

I skipped the donut and we went home, feeling bad about myself. I haven’t felt The Food Guilt in a long time. It’s a sour taste in my mouth and I hate beating myself up over something like food. I’ve come so far in the last year in terms of getting rid of the food guilt–ESPECIALLY going scale-free for the summer–and I feel like this is a setback. So there it is.

QUESTION: Do you have food guilt? What do you do?