Is Your Partner Losing Weight?

They May Be Planning To Dump You

Another one of those articles came through my RSS feed that made me laugh out loud. Oh my god! The travesty! My partner trying to better their life, live healthier, could be a sign of the coming-doom?

But before you laugh like I did, take a moment to really ask yourself: would you wonder this if your partner/wife/husband/SO suddenly started focusing on losing weight and looking better? Would the thought cross your mind?

While the article is flashy and what I like to call “chick fluff” (most from that website are just “fluff) there is some truth to it. I’m not talking about those Cosmo articles that give the “Five Signs He’s Cheating On You” –#1 being that he’s paying more attention to his appearance and working out. I’m talking about those partners that try to sabotage your efforts because they DO think you’re planning to leave them.

When I started to lose my weight I was in between relationships. I didn’t have to worry about how my decision to get healthy would effect my relationship or partner.  The healthier I got the more important HEALTH became to me when I picked my partners. My standards changed drastically. For the better.

I’ve talked before about a guy I dated who did everything he could to sabotage my progress. While I was in the moment I thought he was just a big effing jerk but after some time and distance from the situation after I broke up with him I realized something. Sure, he was a jerk and was mean-spirited but the reason he was sabotaging me was out of insecurity. He probably thought the closer I got to my goal weight, the more weight I lost, the less I’d want to be with him. In fact, he was overweight as well and had struggled with his weight most of his life. So perhaps my weight loss effected his psyche and made him feel insecure about his own body.

I think this is a very valid feeling. 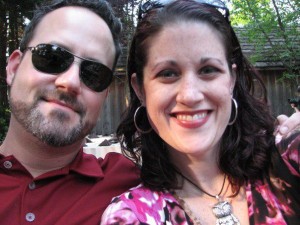 I have a confession to make: When Michael decided to try the Slow Carb Diet earlier this year I had a twinge. It was a fleeting thought but it still crossed my mind. Was he trying to lose weight because he wanted out of the relationship? The Insecure Fat Girl in me reared her ugly head and planted that thought in my brain. She doesn’t come out often anymore. It’s few and far between when that Old Me Insecurity comes back but it did. And then Michael lost 25 pounds and looked great. Did I still wonder if he was going to leave me because he’d lost weight? 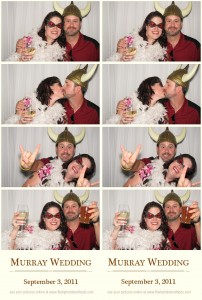 Our relationship was stronger than it had ever been. We celebrated our third anniversary together. We were training hard and competed in the Portland Century together. We encouraged each other to be healthy. That is the way it SHOULD be. We talk about our future together, we make plans together. As we should. 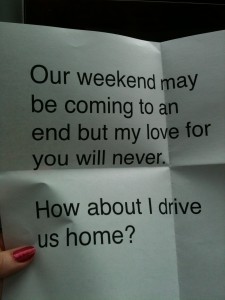 Every relationship has ups and downs, and anyone that says they don’t is lying. Or completely unaware of their relationship and partner. But my partner losing some weight to feel better about himself is NOT a threat. It’s not a threat to MY weight, it’s not a threat to our relationship. I realized that and fully supported Michael in his efforts to lose 25 pounds (even if I wasn’t doing the same diet).

Now I have two questions:

1) Have you ever felt insecure about your PARTNER wanting to lose weight? What did you feel? How did you act? Did you do things to sabotage them?

2) If you’ve had an insecure partner who didn’t support your weight loss, or questioned it, how did you react? Did you try to reassure them you weren’t leaving them if you lost the weight?