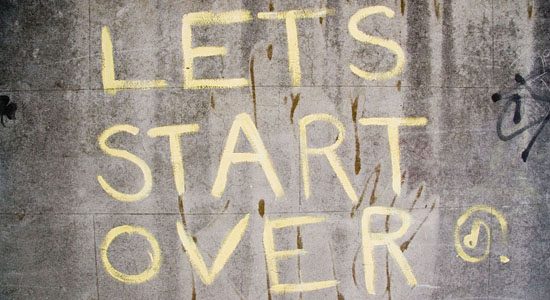 I’ve had to start over a few times in the last few years. When I decided it was time to lose the weight, I had minor setbacks. For example, I’d fluctuate up and down the same few pounds or I’d hit plateaus that lasted a really long time. I was lucky in that when I finally set out to lose 100 pounds, I never gained it back. A common occurrence is for people to lose a significant amount of weight and then for whatever reason, gain it all back and more. I am so grateful that wasn’t the case for me. That does not mean I had a perfect time of it.

The first set back was in 2009. After losing over 100 pounds, weighing in at the lowest 143, I proceeded to gain 16 pounds. On New Year’s Eve my weight had gone up to 159.5.  What was the reason for this weight gain? I was eating the same healthy way I’d eaten to lose the weight. I was still exercising 5 days a week. In fact, I was training for the Shamrock 8k, the Hood to Coast Relay race and the Reach the Beach 55 mile ride.

I started taking a medication that caused weight gain. It was slow at first. A pound here. A pound there. Then I was 5 pounds heavier. I told myself it was no big deal. I was still under 150 pounds (my goal weight). I told myself that it was the training. All that running I was doing. I was gaining muscle. Excuses, excuses.

I peaked at 160 pounds. I was 10 pounds OVER my goal weight and not happy. I was angry that no matter what I did–how much I worked out–I could NOT lose any weight. What gives?? I saw a nutritionist. I saw my personal trainer again. I was feeling depressed. I’d come so far and here I was: a clique. Someone who lost a lot of weight and was gaining it back. Then it dawned on me. The medication. Maybe it was causing weight gain? Maybe it was making it impossible to LOSE weight?

I was right. I stopped the medication and immediately started losing the weight. Two pounds in fact.  It took about ten months but I lost the 16 pounds I had gained on the medication. I didn’t do anything special: just my normal eating, calorie counting and vigorous exercise.

The next set back I had was last September. I successfully ran Hood to Coast and was feeling really good about life. I was prepared to immediately start training for the Las Vegas Half Marathon. I went for a run a week after Hood to Coast and realized I was injured.  Overuse of my IT Band. Suckage. That meant months of no running.

I went a little batty at first. I was sad. I was angry. Depressed. Stressed out. Anxious I was going to gain back all my weight. Then I snapped out of it and pulled myself together. I had to find alternatives to running.

I did physical therapy (which was a negative experience), acupuncture (also negative), massage therapy, lots of yoga, stretching. In the end it came down to this: I had to start all over from scratch. I took 6 weeks off from all running and then I started the “return to running program” my sports medicine doctor put me on. I was starting all over. Walk, jog, walk, jog, eventually run…

In the end it came down to listening to my body and let it heal. I had to switch things up. Changing my workouts ended up being a GREAT thing. It ended the boredom I was feeling.  I started lifting weights just to have something to do and fell in love with it. Weight lifting was something I’d avoided for a long time and it ended up being the BEST THING I EVER DID. I immediately lost those last 5 pounds I had gained. My body changed. I got toned. I felt better. I felt STRONG.

I was happy with the changes and even when I was “cured” from my running injury I still lifted weights because I realized just how important it was. The injury ended up being a GOOD thing!

When I was trying to reteach myself how to eat healthy I had many slip ups. It was hard breaking a decade of bad habits overnight. If I had a “bad food day” I started over the next day. The next day was a clean slate, no mess ups. A new day meant I started at zero and could make better choices.

Remember: starting over doesn’t have to be a bad thing. Keep moving forward and you will be okay.

QUESTION: How many times have you had to start over? What helped?