I loved this article so much. If you have the time, give it a read: How to Feel Better About Not Being as Good as You “Should” Be. It definitely speaks to where I am at currently.

Life is a lot different these days. In some ways it’s the same as it was pre-baby. Work, chores, life, gym, friends and family. It’s similar in routine, we just have a little life with us now. 🙂

But I’m different. My priorities have shifted. My body is different, obviously. And it’s hard to come to terms with that. I was making some progress with weight loss this summer. I lost about 4-ish pounds and was feeling re-energized and motivated.

Then that plateaued. I stalled out. Then I ran into some issues. Sure I could make excuses but the facts are: I was stressed out about Logan starting daycare and did some stress eating. I regained a few of those pounds I’d lost and that was very discouraging. The other fact: I had a major decrease in my milk supply when I tried to reduce my calories.

I wrote a post a few months ago about wanting to get back into fitness and that I wanted to lose some weight but that I obviously Logan was the priority and if I saw a cause and effect in my dieting and milk supply I would back off. 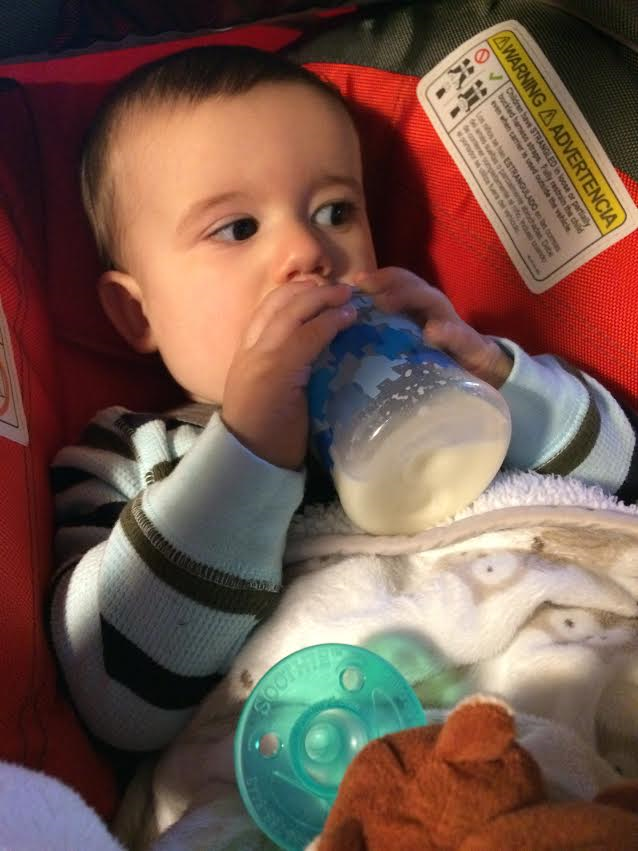 I kept working out 4-5 times a week and I was still counting my calories. My priority was feeding Logan. I was disappointed I had to take a break from trying to lose weight but I reminded myself what my priority was at that moment. I came to terms with the fact that my weight loss goals would probably have to wait until I was done breastfeeding.

I started to write this post several months ago. Then we started getting sick. All.The.Time. Seriously–too many colds to count, bronchitis TWICE, sinus infection TWICE, freakin’ pink eye…! It felt like we’d never be well again. Everyone in our house was sick. I’d get back on track with the gym and get in one or two workouts and then I’d get sick AGAIN and take a week off from the gym.

For the last month I’ve been feeling pretty depressed. A big part of that is the constant illnesses. You just don’t feel good about yourself or life when you are sick. And exercise has always been a positive way that I relieve stress and improve my mood. Not being able to do that consistently has effected my moods more than anything, I think.

Waiting to lose weight has been a hard thing to reconcile in my mind, though. Especially since my “identity” has kind of been “the girl who lost 110 pounds” for so long.

Well, recently I’ve come to the realization that I think breastfeeding is coming to an end soon. My supply has dwindled to less than half of what it was. Logan is less interested in breastfeeding and I reached my goal of breastfeeding for 9 months. So starting in January I think I’m going to start slowly weaning and then focusing on my health and losing weight.

I won’t lie — I’m having a hard time with all of this. I’m struggling with the idea of quitting breastfeeding, even if it’s time. I’m feeling very emotional about all of that.

I’m also struggling with going back to being restrictive with my diet in order to lose weight. I thought those days were long over–and that I could easily lose weight doing what I’ve done for 10 years. But the reality is, I’m going to have to buckle down and cut my calories, say no to that second glass of wine, cut out sweets and stop eating old trigger foods (like pizza) in order to lose.

I’ve preached “eating in moderation” and not starving yourself for years and I plan on following my own advice. But I also need to stop making excuses for eating one more cookie or snacking on crap and not logging it. I need to be accountable to myself and honest. 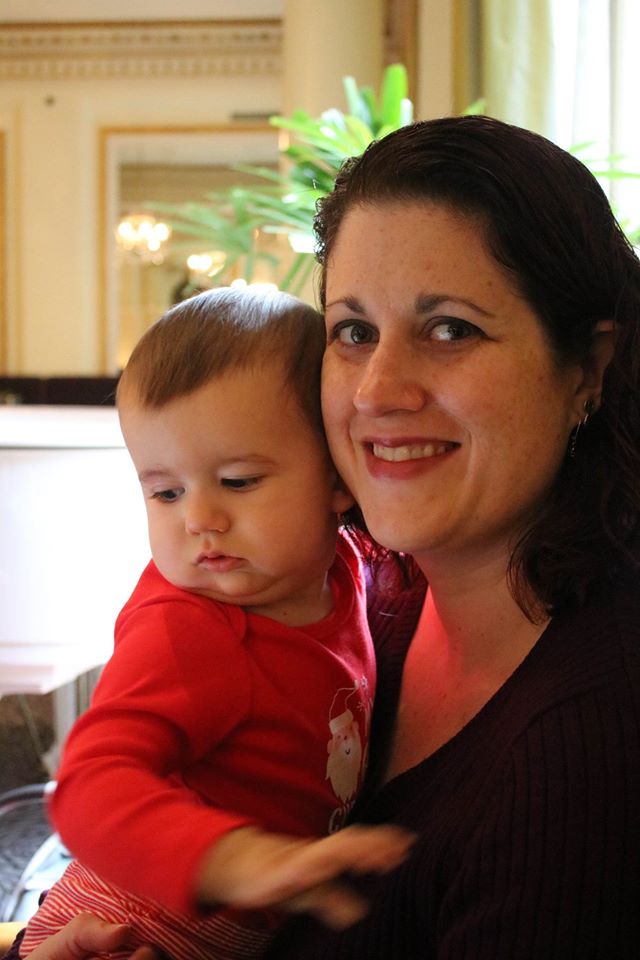 The day after Christmas, depressed about the photos of myself from the holiday (I mean really, should that have been my focus?? Or should I have been focusing on my baby’s first Christmas?) I stepped on the scale expecting the worst. It wasn’t too bad. I’d gained 3 pounds since the end of October. Basically–all the weight I managed to lose over the summer was back. I still have 20 pounds to lose.

So soon. Soon my body will be mine again and I can get serious about this 20 pounds.

“When the will is ready the feet are light.”
–  Proverb

When I was trying to lose 100 pounds, or when I had lost the weight and was trying to keep it off, I can’t tell you how many times someone told me “I just don’t have the willpower that you do.” There was something negative about that statement to me. Not just the negative self-talk where the person was saying “I Can’t” without even trying, but also the implication that willpower is something you have to struggle for.

What is the difference between dedication and willpower? 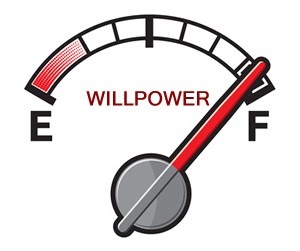 Recently Michael gave me a compliment about my pregnancy. He said he admired my “dedication.” He said he was impressed with how dedicated I have been at eating well for me and the baby, still working out, not slacking on my gym schedule (but also taking days here and there when I did need rest). My comment was that overall I was really happy with my pregnancy and I felt like I had done things “right” for ME. My diet didn’t change all that much, just ate a little bit more. The one thing I regretted was not cutting out the sugar. I voiced my concern about giving my kid a sweet tooth before he’s even here…but I just didn’t have the willpower to completely cut out sugar from diet.

Again, that word. Willpower. It feels so negative. “I didn’t have the willpower to cut out sugar” = I am weak and dependent and addicted to sugar. That’s what I think when I hear myself saying that. Then I feel deflated and think, why am I so weak? Why CAN’T I cut out sugar from diet entirely?? What’s wrong with me.

“Using willpower is exhausting: I had to put myself in the mindset of “I’m gonna do this.” Which is a hard mindset to get into. But now that it’s a habit, it feels natural. I don’t use any willpower on it, and I have willpower leftover for dealing with other occurrences and forming more habits. I’m less exhausted when I use less willpower and rely on habits I’ve built instead. Who doesn’t want to be less exhausted? (source)”

It really is. The concept of willpower is overwhelming and exhausting and feels unattainable. It feels very “all or nothing” to me. Sure, when I was trying to lose 100 pounds I did have an all or nothing attitude about my diet because I had to. I was trying to overcome my food addictions that had lead me to weigh over 250 pounds. I couldn’t eat trigger foods (pizza, ice cream, candy) at ALL because once I started, I couldn’t stop. BUT once some time had passed and I had focus and dedication and was seeing results…it was a lot easier to make exceptions once in awhile because I COULD control it. I knew that having some pizza would not mean I’d eat the entire thing. I had formed a new habit and I was dedicated to my new lifestyle. THAT made it easy. 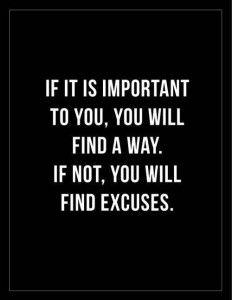 Make it a habit – Instead of looking at weight loss goals as a willpower thing (or lack of willpower thing) I found it easier to think of losing weight as a good habit I was forming. Exercise is part of my routine now. It’s a habit. It’s scheduled on my calendar like everything else in my life and I don’t even think about it. That makes it easy. “Oh, it’s Tuesday– a gym day.” Just like going to work Monday through Friday, or doing grocery shopping every Sunday…whatever it is, it’s part of my routine and schedule now and it’s so much easier just doing it then NOT doing it.

Check in with your goal – I liked to have a spreadsheet with my weekly weigh ins when I was losing weight. It was a visual thing for me, I could track it and see patterns and it was nice seeing those numbers go down.

Make sure that goal is realistic – setting out to lose 100 pounds in 6 months is just setting yourself up for failure. Trust me. You’ll feel overwhelmed and desperate and honestly, losing that much weight in such a short time isn’t the healthiest thing either. Making smaller goals not only gets you to the finish line in  a healthy way but it also gives you something to celebrate when you reach each landmark. Maybe once you lose 25 you get a pedicure, when you lose 50 you buy yourself some new clothes. Whatever it is that helps you stay focused on the end game will make it easier to make small sacrifices when times are tough and you REALLY really want to eat five donuts. 😉

“Obstacles are those frightful things you see when you take your eyes off your goal.”
–  Henry Ford

And of course, even doing some of those things above, you’ll stall out. Plateaus happen. We get discouraged. We stop seeing results. Then it’s time to change things up. Maybe running at the same speed and incline on the treadmill week in and week out isn’t getting you the same results. So try intervals. Run outside. Try something else to shake things up.

Why Can’t I Lose Weight?

Married to My Workout

How to Stay Motivated 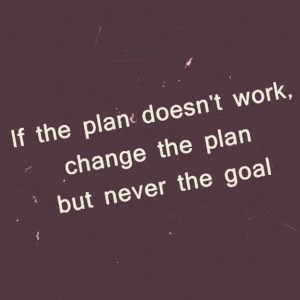 I feel like taking “willpower” out of the equation alleviates some of the pressure. Instead of feeling like one slip-up means absolute failure, changing your thinking to “I am dedicated to losing this weight and tomorrow is a new day to try again” makes us more likely to be successful in reaching that goal. None of us are perfect. There will be slip-ups. But they don’t have to send us back to the starting line every single time.

What do you think? Is willpower an easy concept for you? Or does something else help keep you motivated to lose weight?