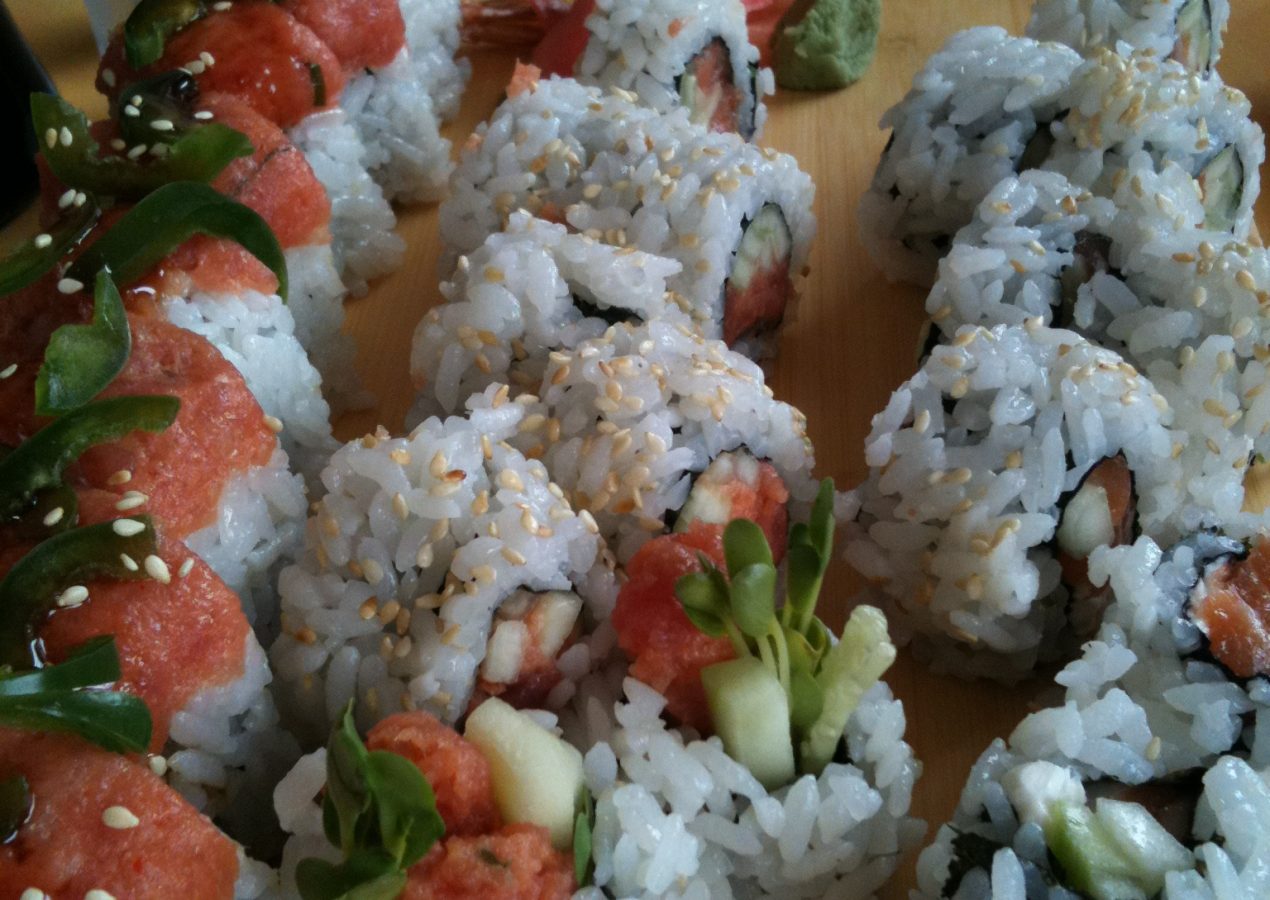 Michael and I hardly went nuts on our “Binge Day.” I did make clear, though, that I wanted sushi for lunch! After a trip to Bob’s Red Mill, we went to Mio Sushi in Sellwood. It’s a middle-of-the-road sushi chain in Portland that is a tad overpriced for being nothing special. But it was nearby and convenient. (We prefer Bamboo or Masu sushi.)

I was feeling tired and it was only 12:30. I ordered a slightly sweetened ice tea for a little caffeine pick-me-up. I was so excited about having sushi for lunch! First we had Miso soup. It was tasty and very low in calories.

We ordered three rolls to share. The Philly Roll, the Spicy Tuna and a mysterious third roll that had crab, tempura shrimp, jalapenos and salmon. It was just okay. But boy did I devour as much as I could!

Sushi sits heavy in my stomach. I’m guessing it’s the rice. It felt nice to feel a bit on the “stuffed” side after a week of no carbs. I loved every bite of our mediocre sushi! I wonder how much water I will retain because of the sodium intake? I’m sure that will skew my weigh-in results on Monday but oh well. It was worth every carby-savory-salty bite.

Over the lunch we meal planned for the week and made a grocery list of everything we needed. The plan was to grocery shop right after lunch and then prep everything when we got home.

Michael invited his mom over for a pre-Mother’s Day dinner. We spent the afternoon cleaning and making the pizza dough. We did one pizza with Basil, Mozzarella and Tomatoes (it turned out perfectly!).

And then one pizza with sweet pork sausage and marinated peppers.

Michael tried a new experiment cooking the pizza. Before, I would brush seasoned olive oil on the dough and he would bake it for about 10 minutes. Then I’d put on the sauce, toppings, and more olive oil on the crust edge. That way worked out really well but this time we skipped all that and I put the oil, sauce, toppings on all at once and Michael baked it at a 500 degree temperature! I was a little skeptical that it would turn out but it was fantastic! It worked so well that I think we’ll do it that way from now on.

The pizza was delicious! I had two slices of the Marguerite pizza. I also had 1.5 glasses of Pinot Noir with dinner. Then I had some Caesar Salad (Michael’s homemade dressing) WITH CROUTONS (yay carbs!) and 1 beer.

I also had 1 slice of the sausage and peppers pizza. I really wanted a fourth slice but I already knew I was going to be over my calories for the day so I refrained. The pizza was awesome.

I had a scoop and a half of vanilla ice cream and the low-calorie fudge sauce. It was wonderful.

I went over my daily allotment for calories by about 400 calories. Thankfully I’d had a great workout earlier in the day and burned 750 calories so I don’t think going over that much will effect my waistline (let’s hope). I didn’t go “crazy” on my binge day but I definitely ate more “junk” than I normally would have. A typical Saturday does not involve sushi for lunch or candy in the afternoon. I don’t feel bad about myself though.

QUESTION: How do you feel about yourself after you have a “binge/cheat day”?

T is for Truth